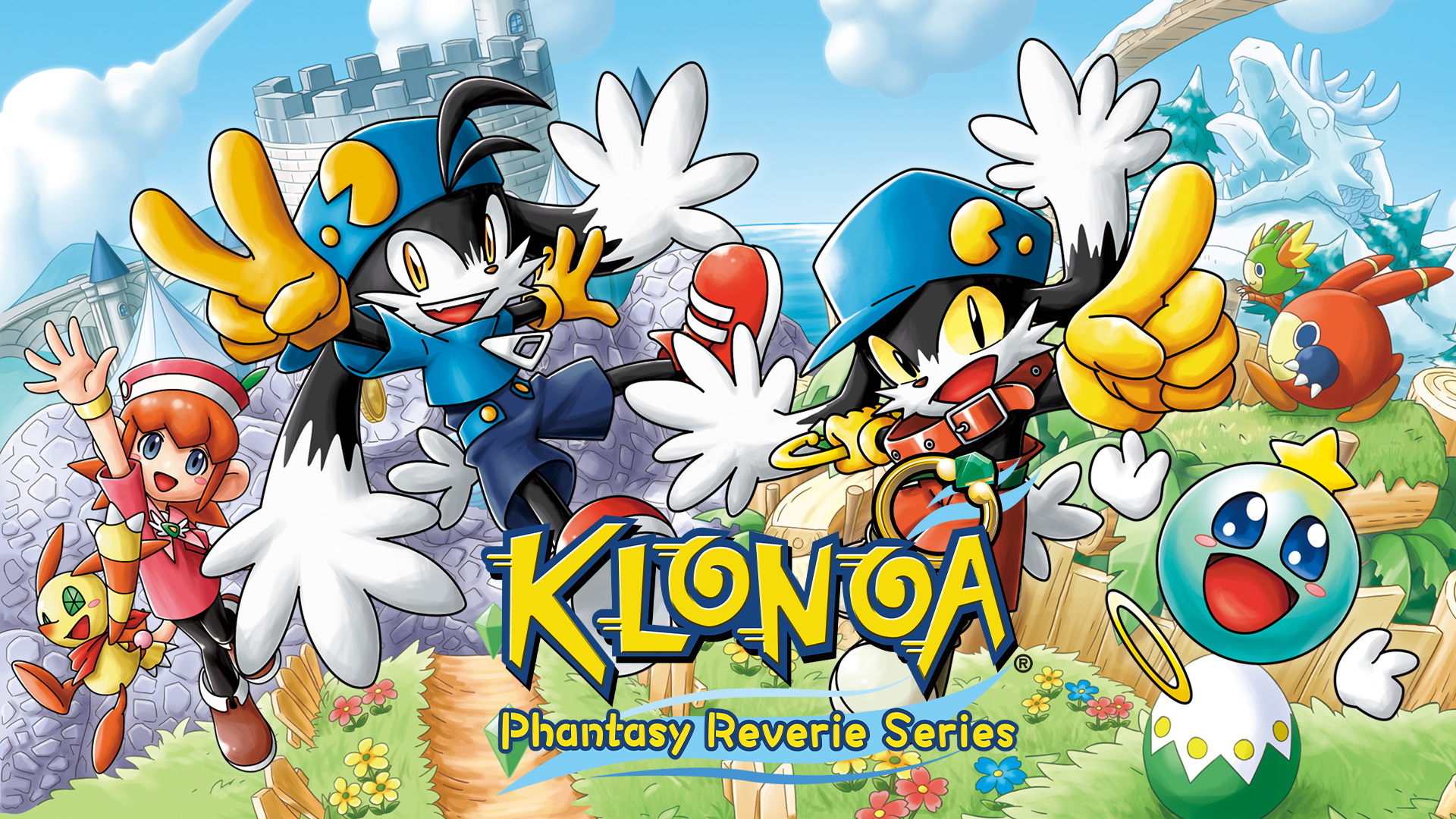 I don’t believe this, a flappy long-eared rabbit once again jumped right back into my controller while I waited for Stray. Reminding me vividly of why I started and never finished this particular platformer in my childhood.

Thanks to Bandai Namco Entertainment for the review copy, I am able to relive the past of when I gave up and tell my younger self to retry again – reliving the time when I let go, and me guiding a game with my past. As I found out playing now, Klonoa turns out to be a platforming puzzle disguised in linear skin which is way ahead of its time.

The question is, why the lack of sequels like many other titles out there as Kirby, Sonic, Metroid, or Mario? Well, perhaps, as I review the game further, I will find out why. FYI in this review, I will be referring Klonoa: Door To Phantomile as Klonoa one and Klonoa 2: Lunatea’s Veil as Klonoa two. As I will at times compare both of them side by side as a whole package.

I must say that the revamped HD graphics look good, and pristine, especially on Klonoa’s model alongside a cleaner UI that looks modernly neat and less intrusive on the screen. However, the new 3D looks seem to have taken away some of the nuances, and bubbly sprites. Especially the last boss Ghadius’s cosmic-looking cape, fading from the universal cape to bluish-black. From a design standpoint, no NPC or enemy that I can remember is as adorable and cuddly as Klonoa himself. Despite the refined graphics and vibrantly colorful levels – at its core, the game models still appear somewhat lifeless, or flat. It’s also odd to see some strange textures of trees, floor, and water, like stainless glass art, etched on concrete walls. 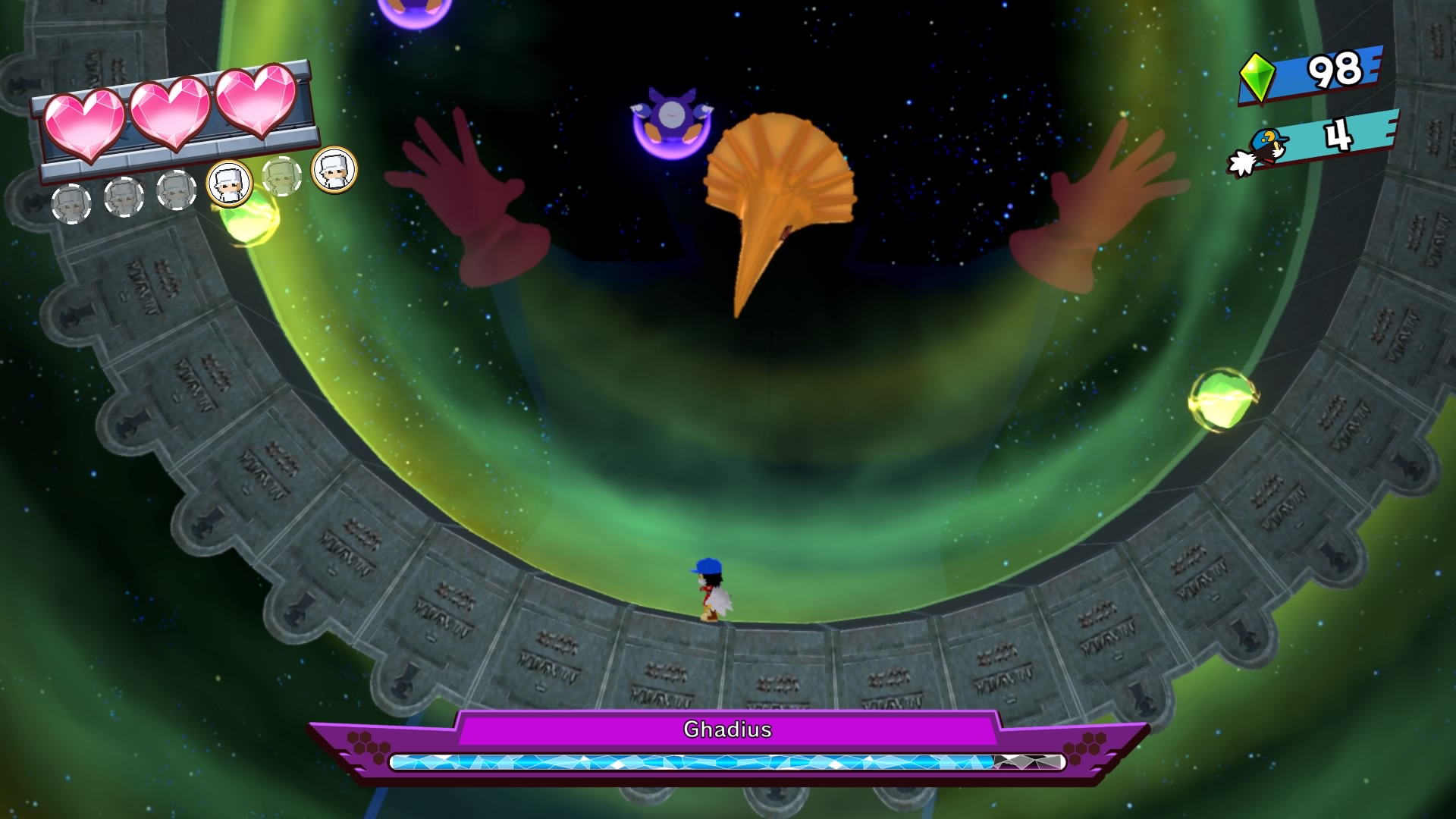 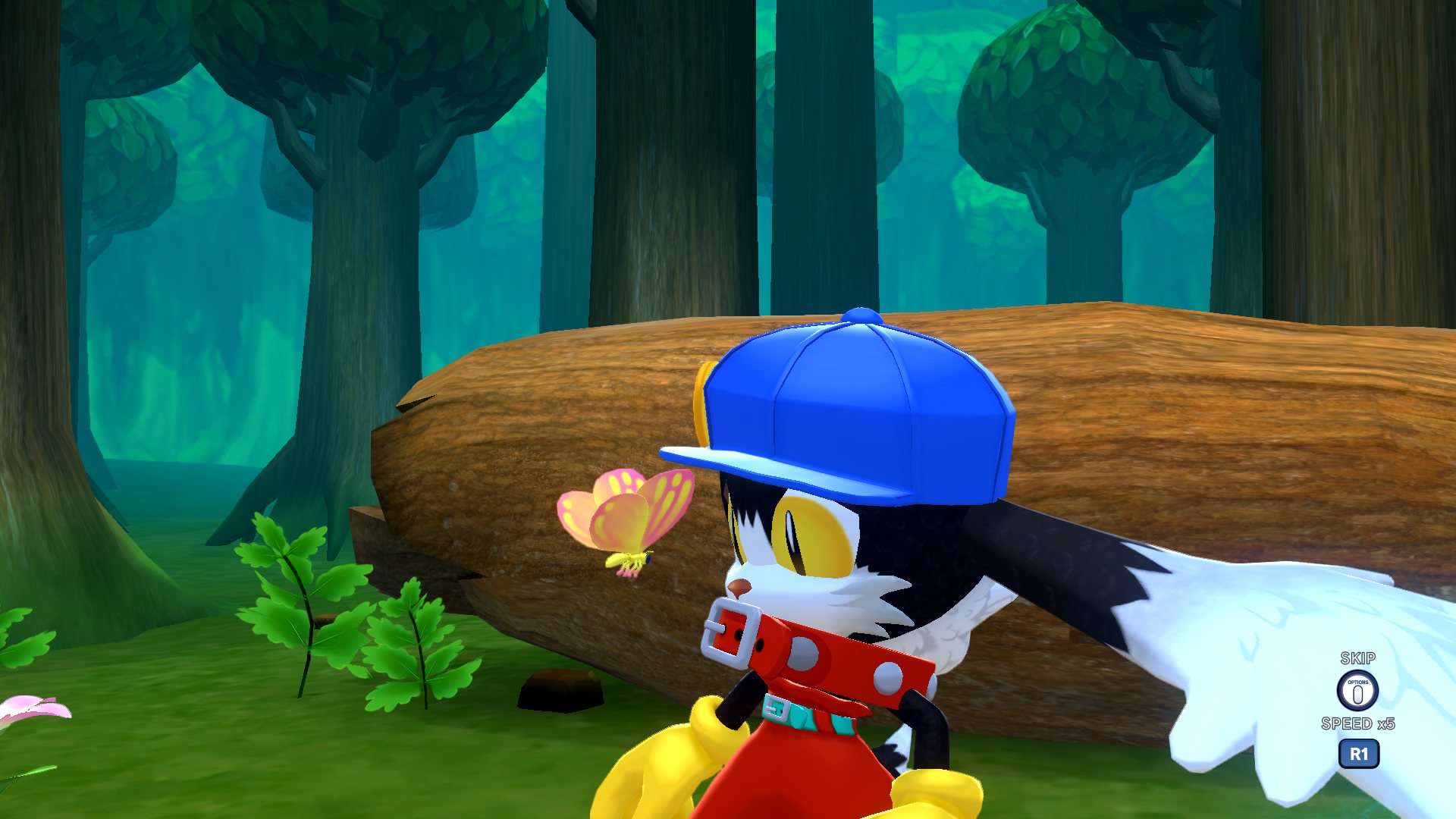 While the bright cinematography style looks like a page ripped out of a fairytale storybook; it felt boring and outdated as the character models appeared stiff, and acted in a slow-paced manner. Fortunately, the skip or fast forward button is available at any time for convenience. But on the downside, the fast forwarding diminishes the storytelling more than it can salvage as the fast-forwarding function propels off way too fast without controlling speed. 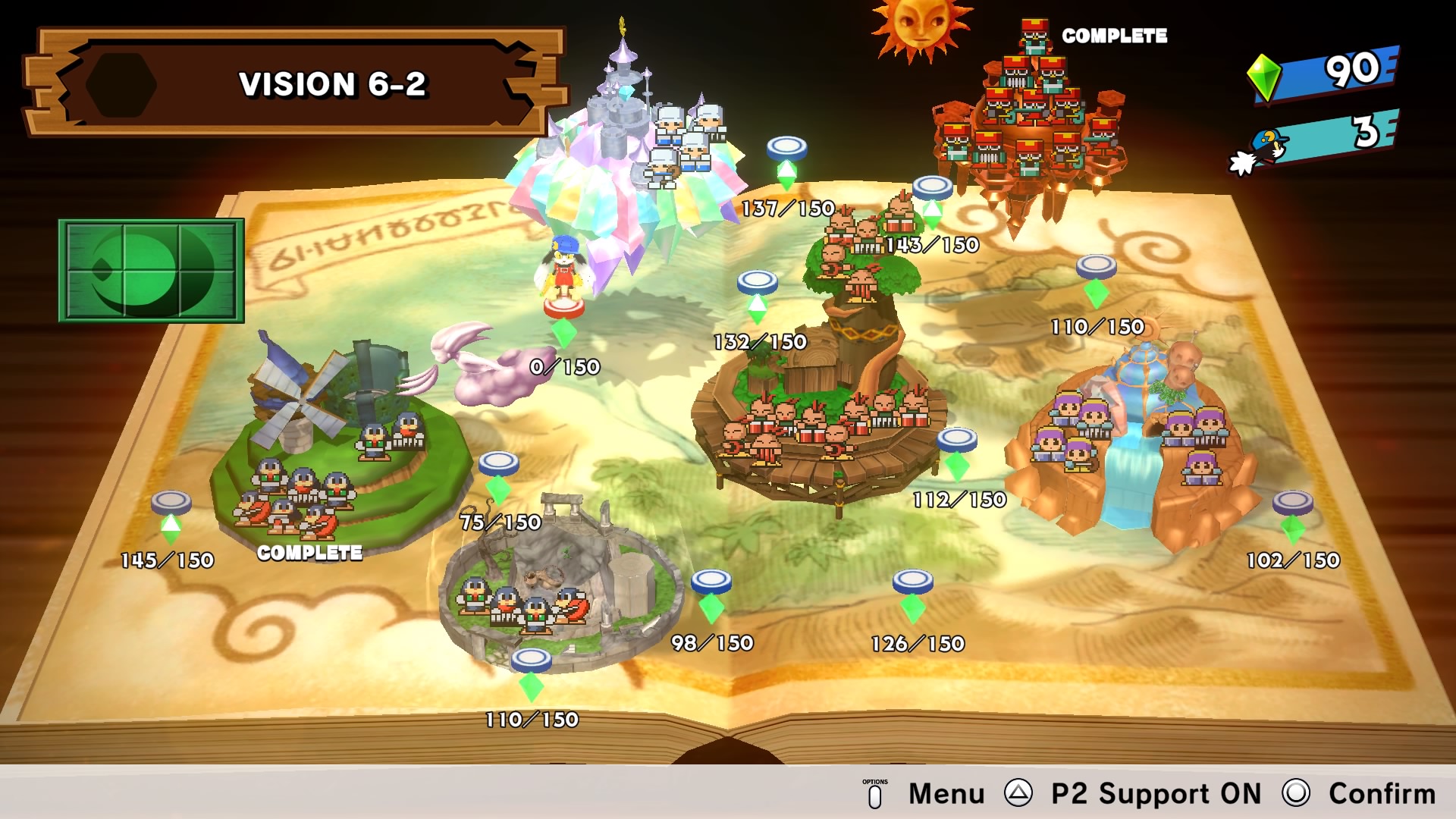 Besides that, the story in Klonoa one and two lacks a more in-depth backstory, putting Klonoa himself, and the dreamworld residents in the backseat. As they give a wild goose chase after a cinematic ice-breaking session, followed by immediately saving the princess, King, Queen, or the world. The storyline seemed repetitive, focusing mostly on the villains and their dark motivations. 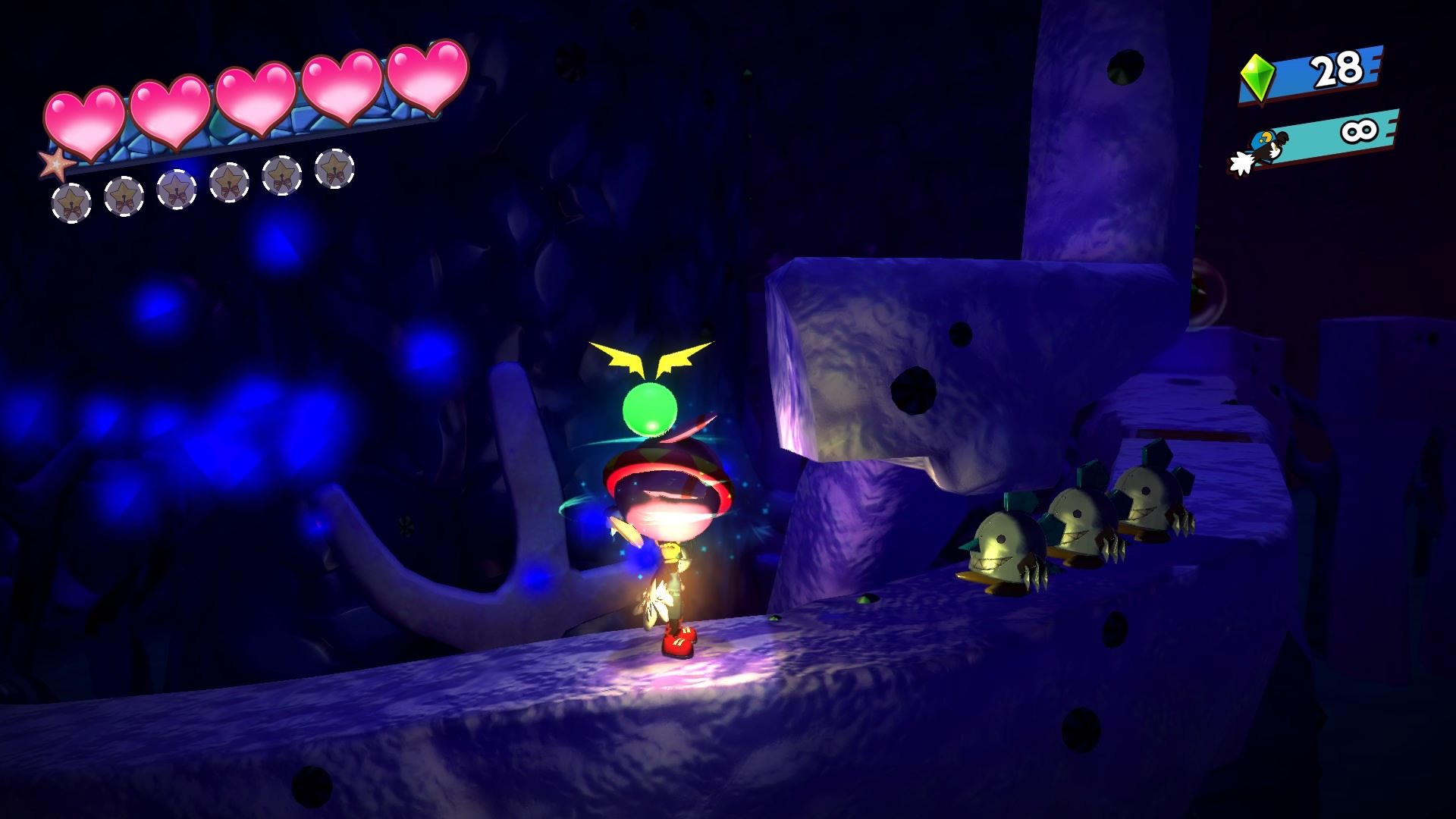 The animation and overall design of Klonoa rely on themes involving elements of a bright dreamlike charm to tell a story; however, it lacks fully realized writing, and the right sense of pace in order to deliver a satisfactory narrative. 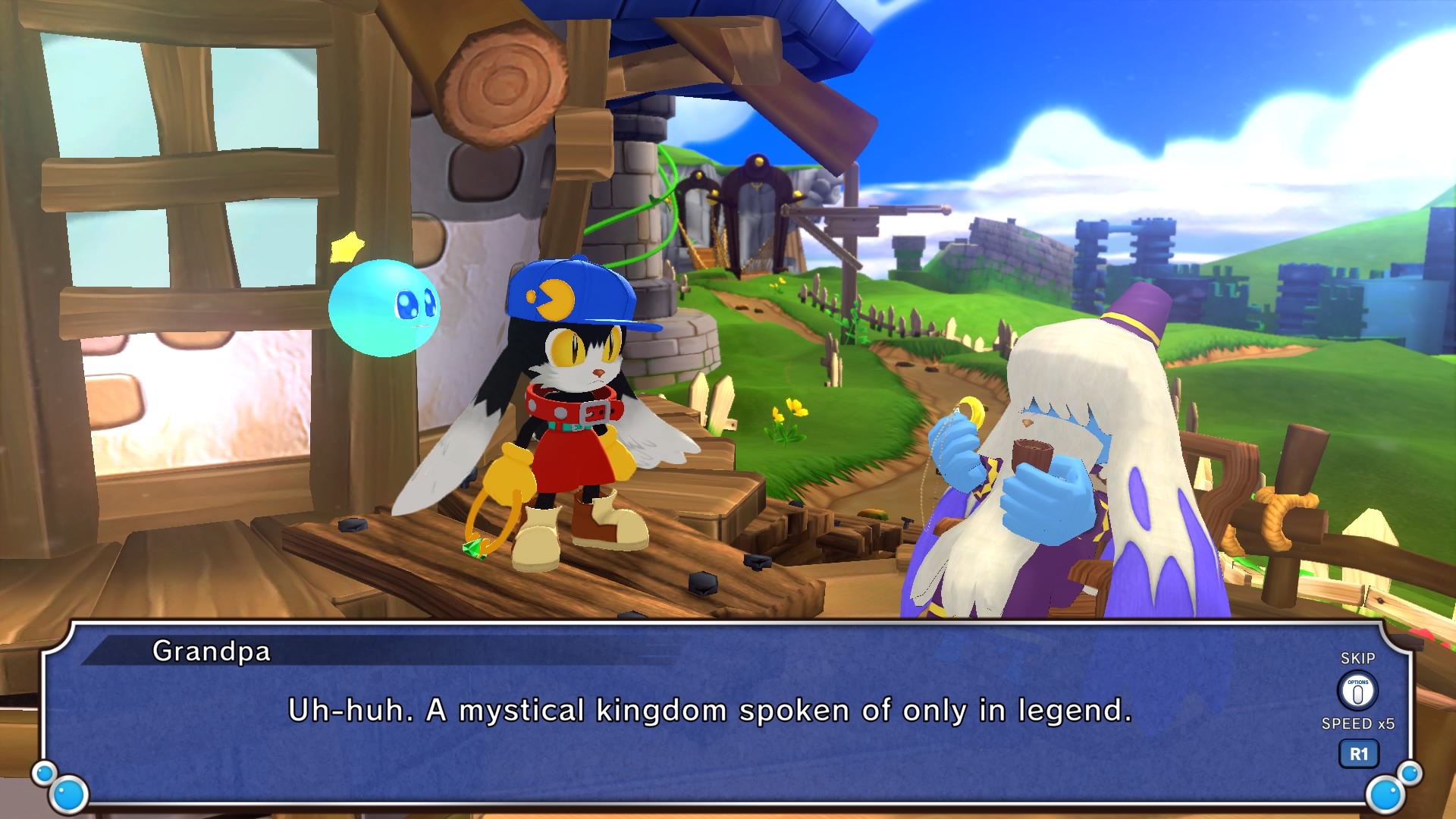 Gameplay And Game levels – Uniquely fun but too much handholding

If Mario focuses on jumps and Sonic on speed, Klonoa’s main focus would be the good camera work and good puzzle timing in executions. Unlike Megaman and Metroid series, where each boss fight adds new abilities or buffs; Klonoa relies more heavily on utilizing every ounce of his abilities and the player’s solution to solve a puzzle by capturing enemies to either throw them in any direction in order to flip a switch or use them as a double jump by throwing them to the ground while jumping to reach higher places. 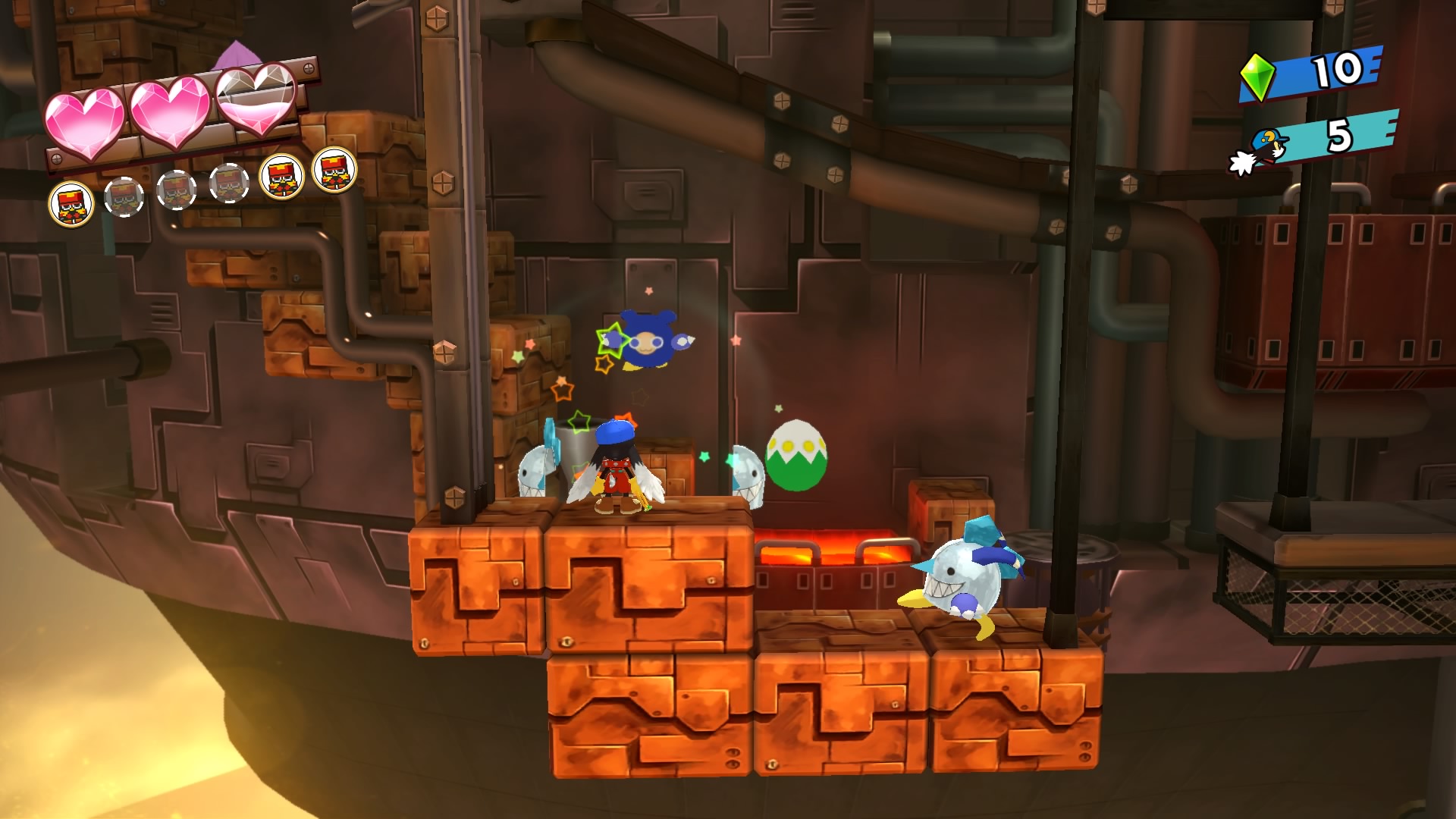 So in a way, Klonoa’s true ability using his ring to shoot then capture a monster (turning it inflated) and throw them anywhere to get from point A to point B. A secondary ability of his is basically dog paddle on air to gain some airtime to the hard-to-reach edges of a platform, which is surprisingly used very frequently. Alongside simple controls, Klonoas’ level designs are more of brain teasers that surprise you along the way with puzzles that force fully utilize every ability he has. 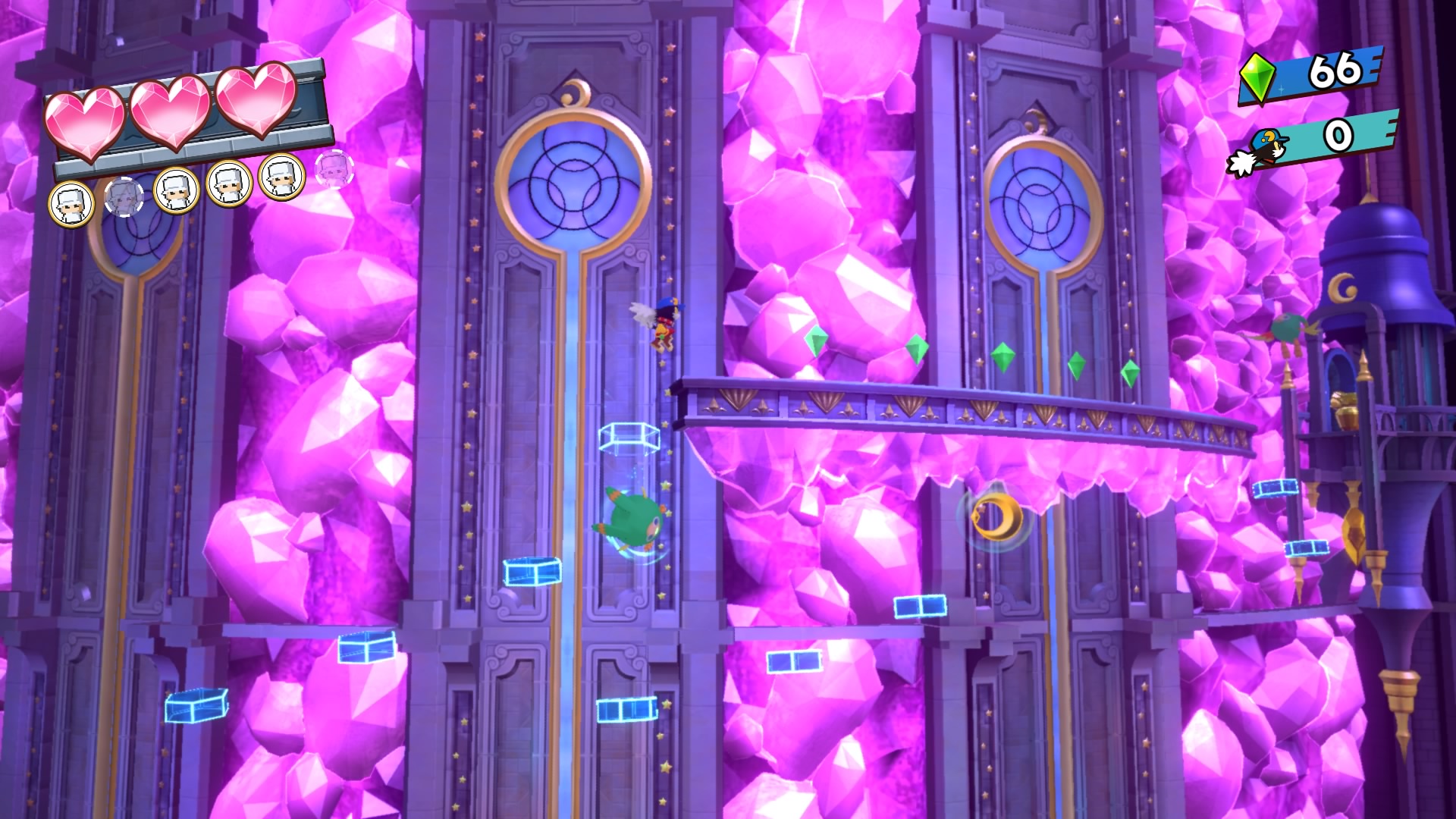 Both Klonoas share the same game design philosophy, but that also extends to enemies’ behaviors too, which in return often act as mere respawnable obstacles minding their own business rather than an actual foe trying to get to you. Making it feel more like playing a puzzle simulator than an action platformer. Similarly, Klonoa’s 1 boss fights, especially the last three levels, are far more interesting than the whole-boss fights in Klonoa 2 combined as their movements are either too slow, predictable, or often do not change up/speed up their attack patterns as their life is on red. So much so that it can waste good camera close-ups designs as it looks epic, but for something so bland. What’s worse is that every boss fight or challenging level is bombarded with tips on how to solve that said challenge during or even before the boss fight happens therefore spoiling half the fun in figuring things out on their own. 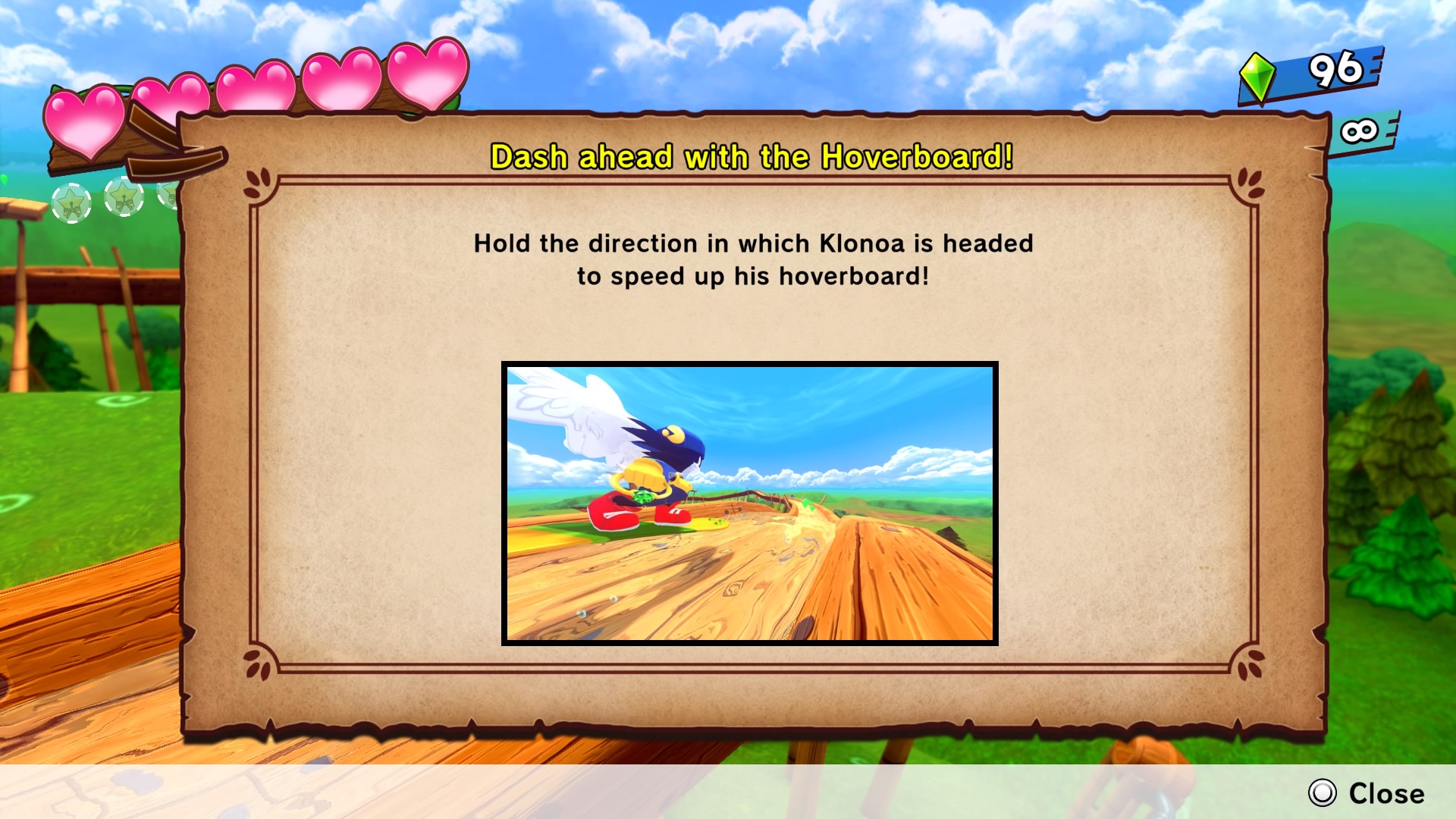 Back-to-level designs topic, while Klonoa one level designs and minigames are made shorter, it’s tightly knit, and compartmentalized. Like running around a tower with an up close and personal camera following me down spiraling downstairs. In this way, the player will feel as if they are exploring every corner of the map, giving the impression that they are inside of a 3D world as the camera follows and bends around nook and cranny. Whereas Klonoa two emphasizes more on a long linear path approach with many high-flying moments and longer minigames that look really flashy but may have overstayed their welcome. During gameplay, the close-up camera shots are great for giving you a more close-up personal moment, but this causes me to jump in blindly as I am unsure if there is even a platform below in between gaps. It would be nice if there were a right analog stick function to allow me to lower the camera for a more downward view. In spite of this, both Klonoas puzzle platforming has random difficulty spikes that can easily crank up to an eleven in an instant. For instances, you were having a breezy casual time only to be surprised to be jumping on steep platforms like landing on a needle while at the same time executing puzzle throws perfectly at the right time in order to exit. One might add that there are pacing platforming issues where players are forced to jump after learning to crawl but to me, it is a good challenge addition to keep things irritatingly fresh. 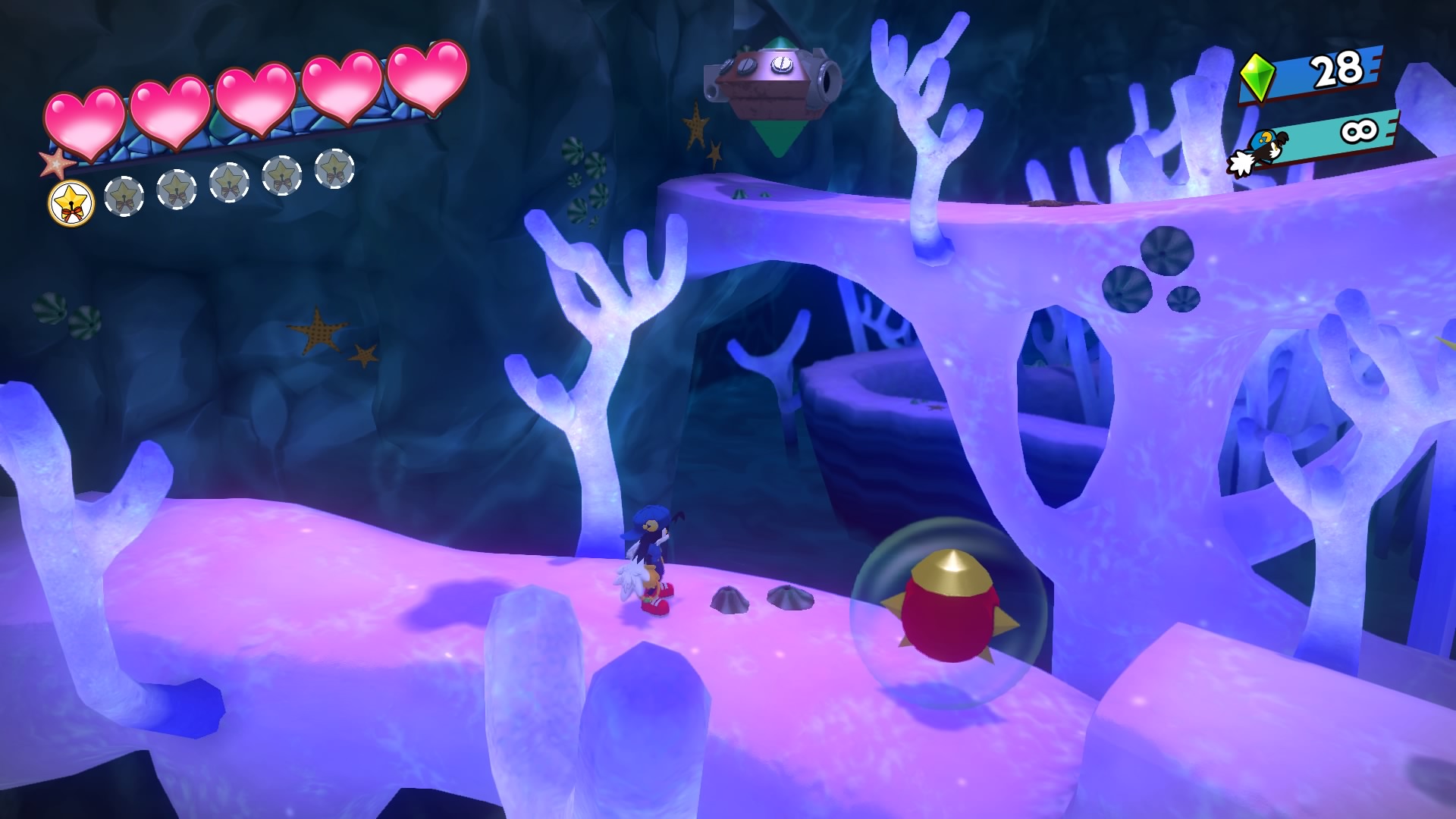 If I were to describe Klonoa’s song during gameplay, it would be walking into an unending circus interlude with carnival cheerful vibes as if I am a kid walking into a circus for the first time – giving a sense of childish dreamy adventure. While these scores are great for brightening up my Monday blues with their cheerful tunes; however, in general, they sound pretty much soothingly the same even with different instruments in the play of chimes, bells, synthesizers, and flutes, which is a mixed blessing. The music does elevate mildly in boss battles reminding me of majestic flows including a sort of Arabic tunes and other areas such as forest levels picking up tribal tunes. But it is not as deeply varied enough, rather the music tends to stick through similar themes of a distant dream, giving it a consistent tone. 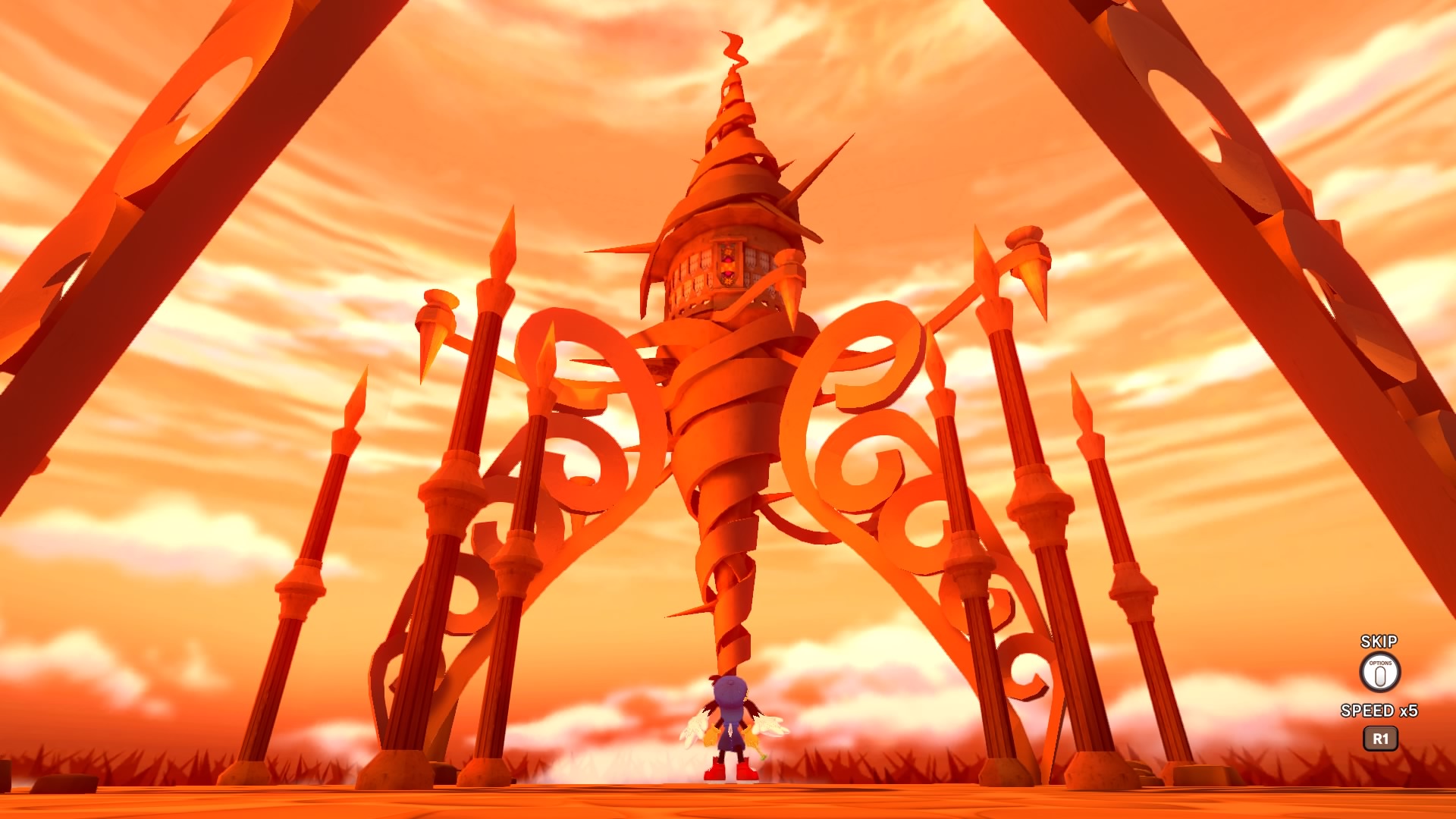 Though it does sound soothingly good, the dreamlike tone does make me feel distractingly giddy with the repeated loops. Symptoms include light-headed jumping and puzzle solving. Ironically enough, some of the piano pieces really do keep me awake since they hit hard and loud which I find to be rare. While the close-up camera shots are really great in terms of right-in-your-face kinda action, it does not follow suit with the distant sound and music. 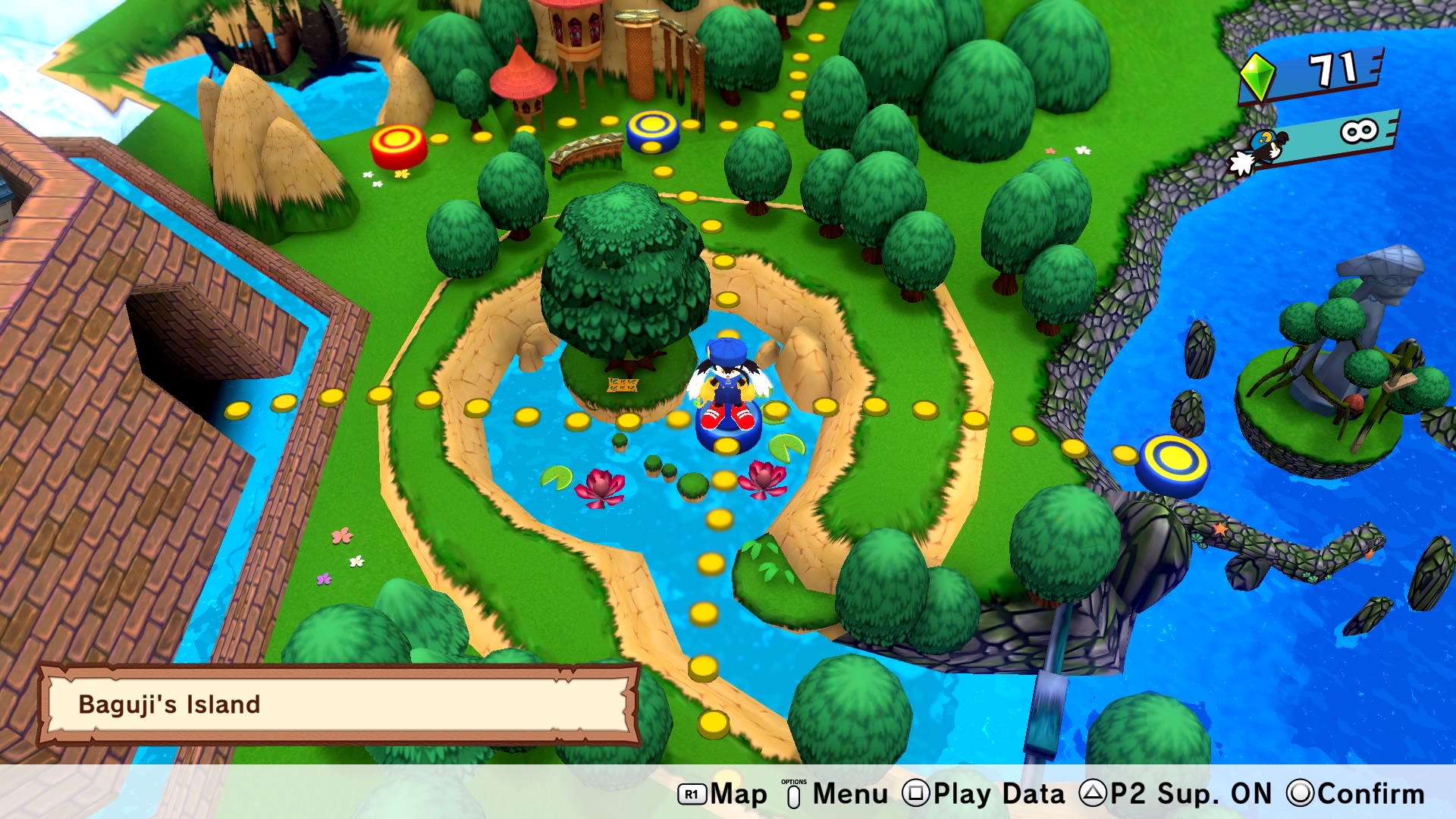 For sounds to me, besides the alarm clock checkpoint and picking up pieces of stuff; the sound department is seriously lacking in delivering more higher impactful volume needed to shake me to my ears if I were to throw something and it hits a mark including jumping, footsteps, get damaged, explode or even shoot myself out of a cannon. Some of these actions were covered by Klonoa’s adorable voice work instead with words such as ‘Haiya’ and ‘Wahoo’. In Cinematics, voice works delivered by most characters are always spoken in high-pitched gibberish, that sounded like childlike banter. Nevertheless, it has its own squeaky charm, like walking into an anime convention for the first time surrounded by cosplayers trying to act and speak cutely Japanese. 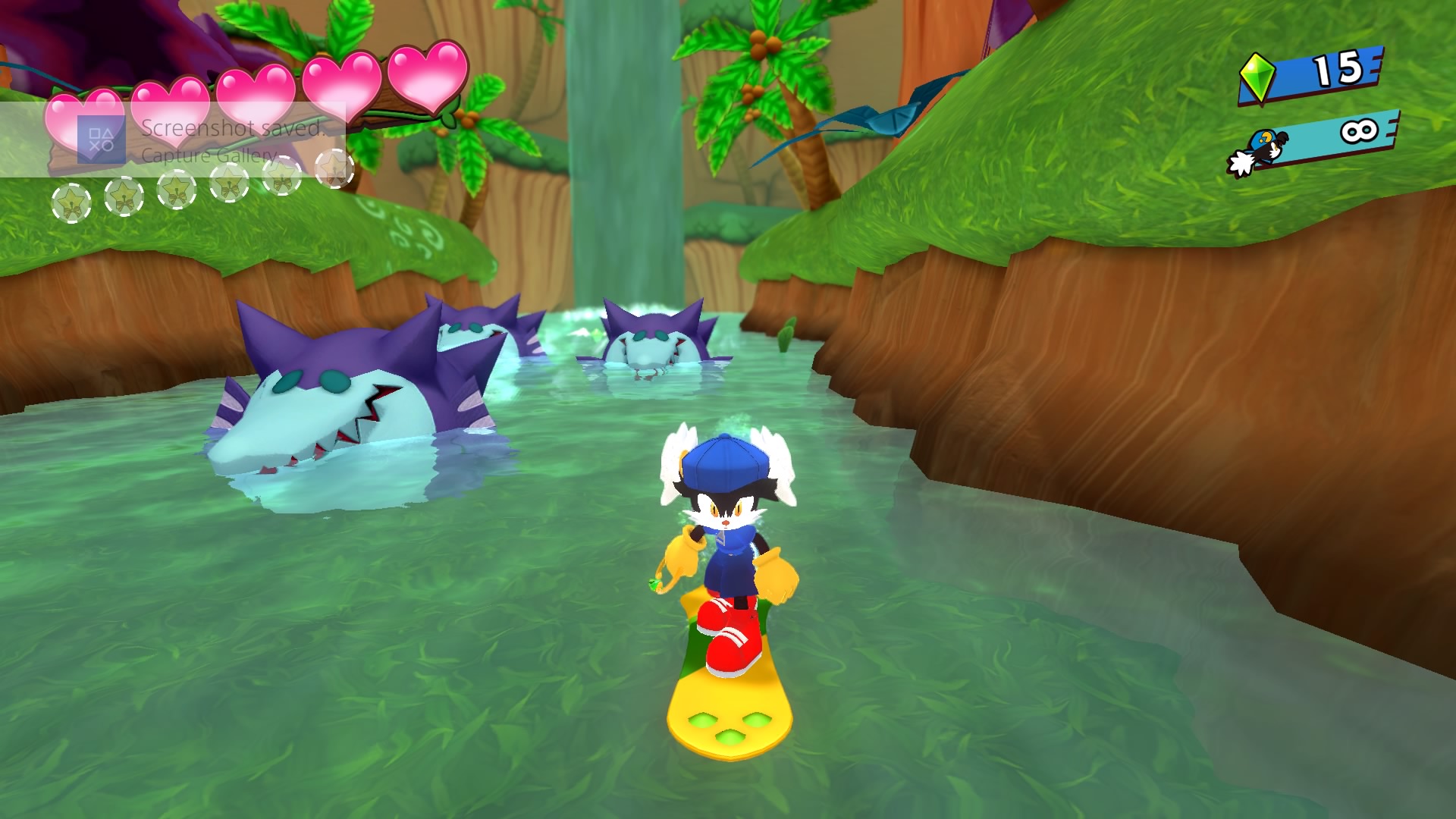 What I Liked About The KLONOA: Phantasy Reverie Series 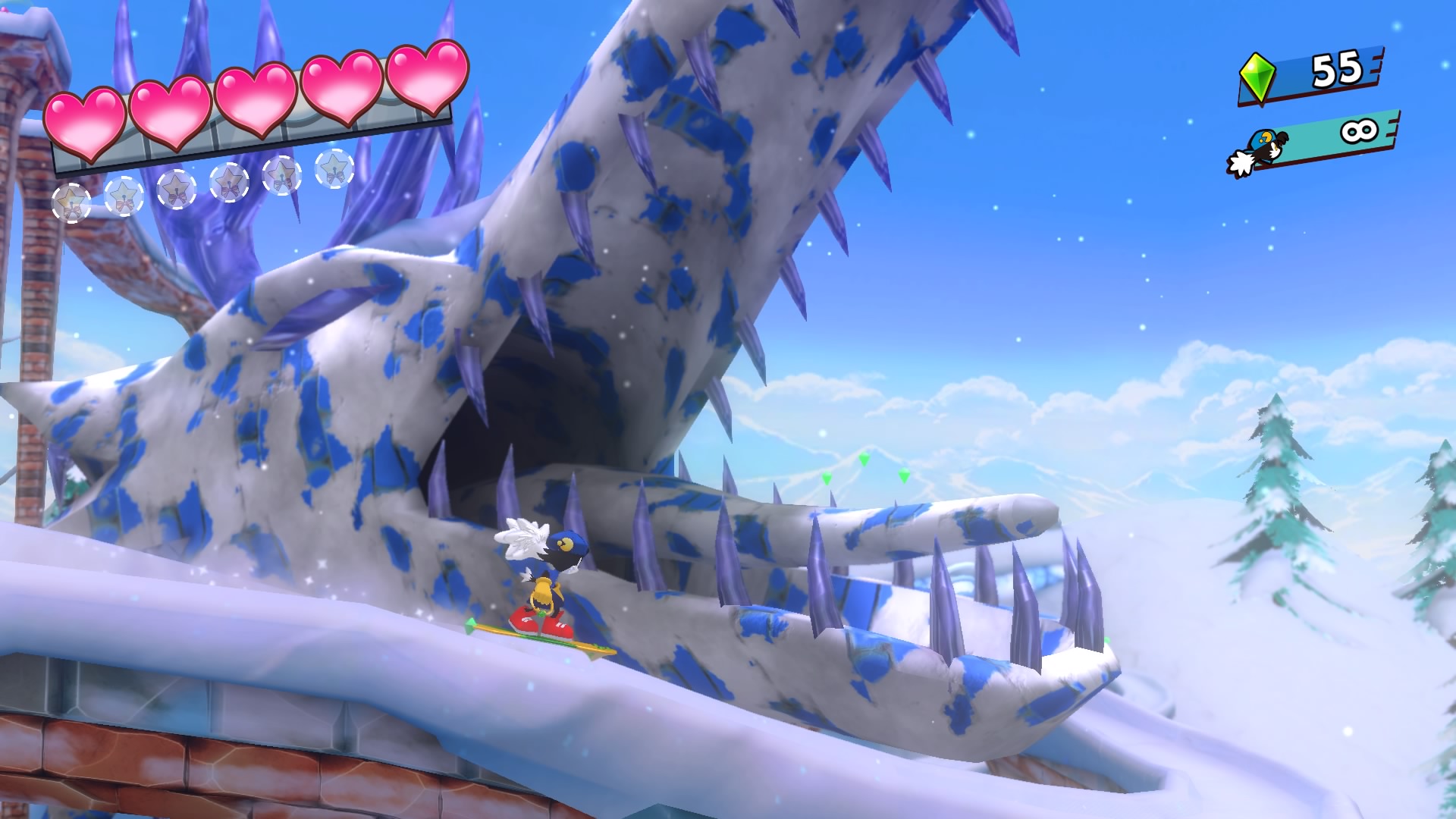 But Surely There Was A Dream…

In my preference, Klonoa one is better than Klonoa two in terms of a short burst of fun minigames, night/day cycle, and memorable last few boss fights. In general, KLONOA: Phantasy Reverie Series is a true must-have for fans of the series (for nostalgic reasons) and platformers. It is also a great accessible entry point game to introduce non-gaming friends, children, or spouses who expresses some level of interest.

While the series does exude some charms with puzzle platforming, music, remastered HD graphics, cleaner UI, and voice work. But it wasn’t enough to be wholesome, lacking in covering more ground of louder sound effects works, fast-paced cinematic, more memorable boss fights mechanics, rewarding collectibles, and other lively character designs of NPCs and enemies alike. I believe this would make the Klonoa series catch wind and stand out even better from the rest of the platforming crowds out there. Moving forward, I do wish to see more of this series after part two and more spin-offs to make more backstory of Klonoa and his family.