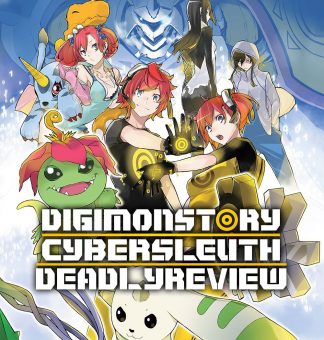 It has been years since we got a Digimon game for the Playstation. After a long wait, Bandai Namco has finally given us Digimon Story Cyber Sleuth (DSCS). DSCS was release last year in Japan with quite good reviews. Let’s see if those reviews are true and how the translation turned out.

Story
Story telling was never a major selling point of Digimon games, so I was not expecting much in this department.

You play as a Female or Male Protagonist named Ami Aiba (Female), Takumi Aiba (Male) or you can rename them if you want, who just hanging around online chatting with your online friends until you received an invitation to a cyberspace event at EDEN which is an online Web service which the users physically enters. You turned up at the event and are given hacking abilities by an unknown hacker. This allows you to ‘recruit’ creatures call Digimons to help fight off other Digimons or hackers. You will be given a starting Digimon which you have to choose between Terriermon, Palmon, or Hagurumon.

Due to a series of unfortunate events, you turn out transformed into a data version of yourself in the real world. You are saved by Kyoko Kuremi who turns out to be a running a detective agency. She agrees to investigate about your condition and also take you in as an apprentice in her agency. Hence this is why the game has Sleuth in it.

It is a very straight forward story and be spited into third plotlines with each having their chapters. Nothing big in this department but good if you like to read a lot of text since only the Japanese text was translated not the audio. So put on your reading glasses prepared your Digimon terms dictionary as there will be more text then there will be types of Digimon in this game. Also take notes that there are some grammar mistakes in the translation. There will be a conversation with the wrong character name as highlighted by some other players. PSVita version has some missing voice audio and also some buggy content which was okay in the Japanese version. So there was some mistakes made to the port and it is not perfect.

Graphics
The game runs smoothly on the PS4 and it should be since it is a PSVita port. Character models and certain environmental received a resolution upgrade but it is obvious that this game is not going to push your Playstation 4 to the limit. Certain items like blurred out textures can look out of place on the Playstation 4 but if looking at Digimons is what turns you on, then Digimon galore as all the models looks crisp and nice in this console generation.

Gameplay
Let’s begin by talking about the game itself. When you start you are given a long video which you CAN’T SKIP and then you are place in EDEN. First thing you notice is that the movement of your character is a little stiff. The movement animation is a little weird, maybe because this is a PSVita port. It not game breaking but you do feel it sometimes when walking around trying to talk to an NPC and the bubble will not pop out because of where your facing even though you are next to him. The camera angle for the game is also locked so you won’t be able to change camera angles in town or dungeons. You are then introduced to your first way to being a sleuth.

At certain time in the game, you are given a keyword. These keywords when use with NPC will trigger a different dialog which will help you find clues regarding to the keyward. The keyward can be view in the option menu which is a rotating radial menu. Speaking about the menu, it has many function from saving, receiving mails, items and etc. You are able to save the game anytime if you are able to access the menu screen. You are only given 3 slot though and also be able to cross play between your PS Vita save game file. One thing bothered me while using the menu is when I was trying to select a Digimon, the game gives anouter glow to which Digimon you are selecting but I feel the glow is to subtle and hard to see sometimes especially on Digimons which has the same color tone with the menu UI interface.

Digimons are divided into Types and Elements. There are Vaccine, Virus, Data and Neutral type Digimon which are shown as symbols beside your Digimon’s name. On top of the Digimon types, you will have elemental which are Water, Fire, Grass, Earth, Electric, Wind, Dark and Light which are shown as colors of the type symbols. The gives a rock, paper, scissors element into combat with Type dealing from 0.5x to 2.0x damage difference and Element from reflecting the attack to dealing 1.5x attack difference. In combat, your cursor will tell which attack will be more effective as the cursor will turn to red color the more effective the attack or skill will be.You Digimon will also be able to do Cross Combos depending on their camaraderie (CAM) stat. If you have 2 or more Digimon are beside each other on the turn bar, a gauge will be there. The higher the gauge, the better the chance a Cross Combo will happen which are random. This combo will increase the number of attacks, increase skill damage, increase a healing skill or increase the value of a certain buff.

At a beginning of each combat encounter, you will notice a circle with percentage number around your enemies. This means that the enemy Digimon is being scan. Scanning is a way to hatch the Digimon Eggs which can be collected or drop by enemy Digimon. After getting 100% scan data, you are able to digivolve the egg of the respective Digimon in the DigiLab. The maximum scan percentage is 200% and if you max it, you will gain extra potential on that digimon. Each Digimon can digivolve or digi-devolve at the Digilab. Evolving increases you Digimon level which unlocks more option for evolving if you reach the required stats. For me, this is the most fun part of the game, leveling your Digimon and evolving them. The evolve animation is quite cool also which follows the latest animation on Digimon Tri. Beside leveling most of your time in this game will be spend in the DigiLab looking through your Digimon collection.

At the beginning the game limits the amount of Digimon you can carry around by limiting your party memory. Each Digimon has a Memory amount and you cannot carry more than the total amount of memory given. As the game progresses the amount will increase so don’t worry. Any extra Digimon you have can be stored in the DigiBank or sent to the DigiFarm. DigiFarm is sort like a day care center for Digimon. Digimons placed in the DigiFarm will level and also gain stats depending on what training plan you assign. Assigning a DigiFarm leader from you list of Digimon is also important as it will change the training plan depending on what Digimon you selected as leader.

Your character movement in this game is a little stiff but not game breaking. The camera angle is fixed so there is no way to view the area nicely. The NPC in the game looks stiff as most of them are either sitting or standing. Areas around the real world looks like an abandon city instead like a busy network of people walking and move in real life Japan. Even some NPC are decorations and does not provide any conversation. Moving around, sometime certain areas look like it can be access but there are several invisible walls placedto prevent you from entering.

There is also a problem with map. The map is not displayed when moving around areas. You have to press R1 to bring up the map and if you do, you are going to see one of the most lazy map designs in history. Having a not dynamic map in an RPG game is big no-no. As you can see below, that is the entire map you get. I do not have an indicator of my position, where I am facing, or any NPC or quest indicators. Putting landmarks like trees and building does not help since as I already highlighted you are not going to be able to adjust your camera to even find those things. It does not get any better indoors and small areas where the maps you get are draw 2D maps which kids can draw. The only time you are getting a map is when you are in a dungeon but those areas usually are straight forward to traverse. You have more chances getting lost in town areas then dungeon in this game.

Beside Story mission, you are also given cases which you can help solve to gain items. These cases unlock certain Digimon and also unlock certain evolution tree of certain Digimons.There are also DLC cases but luckily, those are free for now. Hopefully the don’t lock a Digimon behind a paid DLC case in the future.

The only problems I have is the UI again with cases and story mission. There are no proper indicators to where you should go. Sometimes you have to read the chat with NPC to know where to go next. This for me is a problem because there is A LOT of chatting with NPC in this game. You might get lost not knowing where to go to progress sometimes if you stop playing and continue the next day since you do not remember what to do next. Luckily for cases, you are able to check it on the player menu what to do next but it is still not clear sometimes.

Online Colosseum presents as an online ranking PvP for this game. All you Digimon will set as level 50 in this battle. Nothing much to say about this mode as it is pretty straight forward. Only thing is for the PS4 version. It is impossible to fight a friend online. It will be random and if you are lucky, you will meet your friend. PSVita can battle a friend with the ad-hoc play. This might be patch and hopefully will but until then it is just random PvP for the PS4 version.

Given that this is a PSVita port, it is an okay game overall. If you are looking for an okay RPG game, we might want to give this game a look as it is not the best RPG but it is just okay. If you are looking to spend hours and hours in Digimon heaven, then this is the game for you. What make this game existing is the Digimon without the doubt. After a while I just ignore all the chit chat and story and enjoy evolving and leveling my Digimon. This game is worth it value as you will spend a lot of time on this game.

Rating Reasoning
Personally I was torn between giving this game a 6 or a 8. Taking out all the Digimon stuff, this game is just a generic RPG.