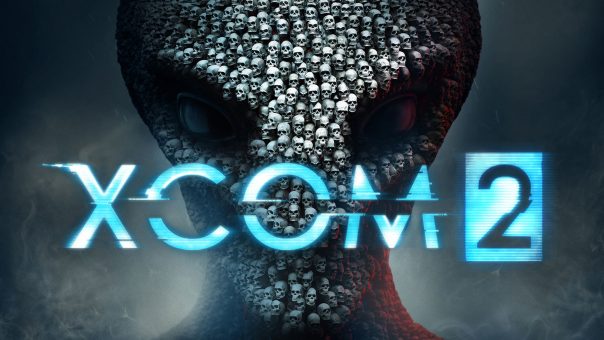 XCOM started off as a turn based strategy game by Microprose (cofounded by Sid Meier, also game designer for Civilization series) in the mid-90s running on MS-DOS. It offers in depth tactical squad based against Alien invasion. The first game was XCOM: Enemy Unknown and its sequel XCOM: Terror From the Deep (TFTD). I’ve played XCOM:TFTD extensively, but not the original XCOM in 1996. Firaxis then later rebooted XCOM: Enemy Unknown in 2012, with the lead designer no other than Sid Meier himself again. I’ve played the XCOM: Enemy Unknown 2012 reboot and its expansion Enemy Within extensively. Much of the review I’m going to express here is in comparison to the 2012 reboot.

The Story so Far

In XCOM2, the year is 2035, 20 years ahead of the event that occurred in XCOM: Enemy Unknown. Much that we thought we have won the war against the alien incursion in XCOM: EU (I’m going to use abbreviation here), but we were wrong. Aliens have taken over the world civilization and the original XCOM organization is now gone into hiding known as The Resistance. The world in 2035 now is controlled by the alien organization called the ADVENT.

The XCOM organization is revived from the original tutorial mission (I’m going to avoid spoilers) and the fight is now taken back to the aliens again, with the commander no other than you the player itself. XCOM base is now no longer underground based, but is a flying mother base from a salvaged alien mothership called the Avenger. 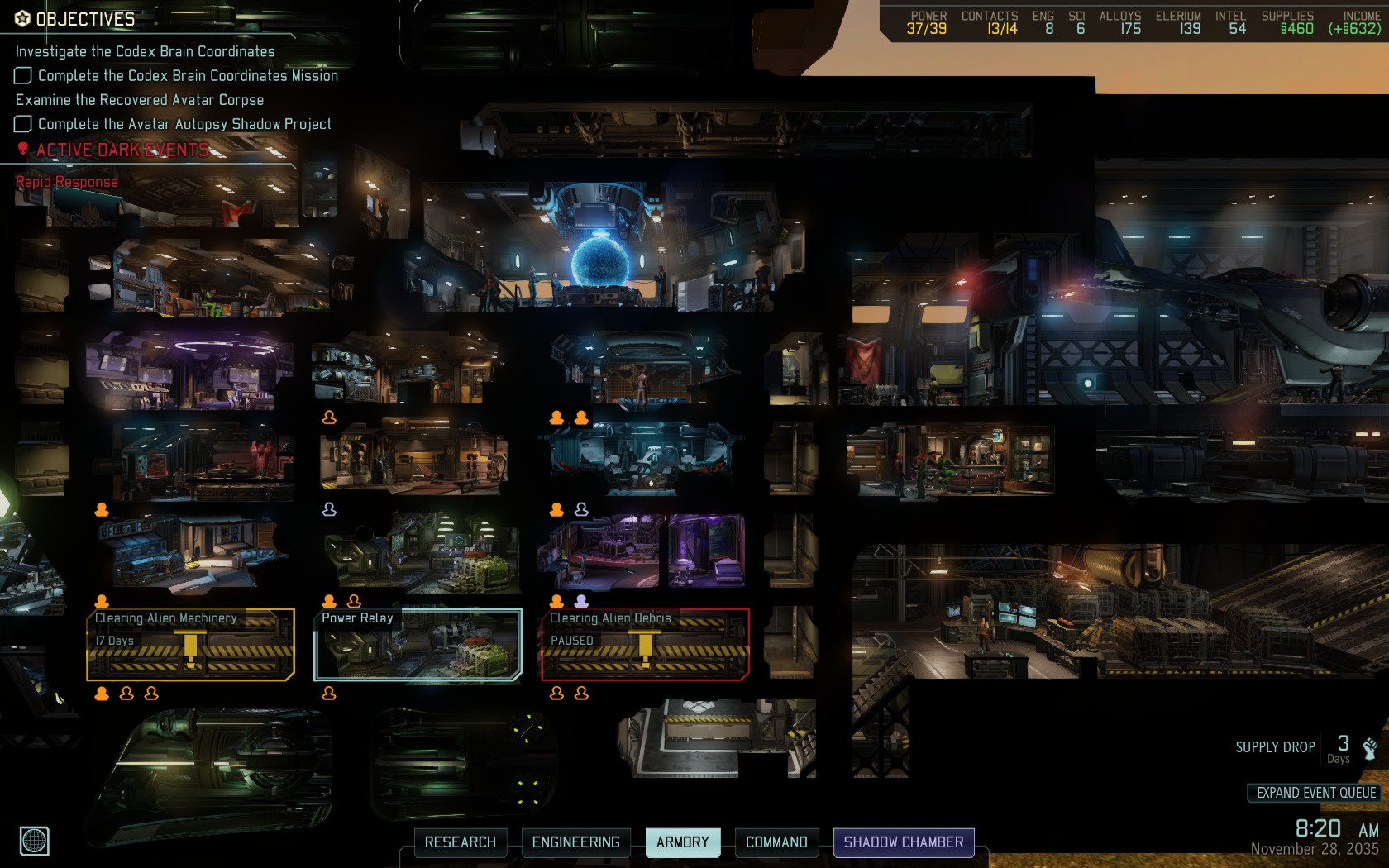 If you remember in original XCOM: EU reboot, you are always in a race against the alien to reach its ultimate goal which is to maintain the Panic level in order not to reach maximum level otherwise it is game over. In XCOM 2, the alien have a project called the Avatar Project which you the player have to manage as well so the bar would not reach its maximum level, you get the idea here.

The soldier classes in XCOM 2 has been revamped and renamed but the roles are still the same. The changes shown below summarizes the classes in the 2012 reboot and XCOM 2 (not going to compare with the Enemy Within expansion).

Each class has 2 subclasses, which you can choose from the set of perks when a soldier gains enough experience and levels up, you can even mix a set of perks from the subclass’s skills making a hybrid soldier. The Assault subclass of a Ranger focuses on melee attacks using a sword, which is something new and very interesting.

Alien’s advancement is in a form of Avatar progress, which is the doom meter you see similar to the Panic level in the reboot. During the progress of the game, random events (same like the Terror events in EU) will appear forcing you to choose from 1 out of three available mission to counter an Alien’s Dark Event which is a form of alien’s strategy to counter your tactics.

Geoscape
In comparison to XCOM 2012 reboot, the Geoscape where you plan your base and passing time is vastly improved in design. Instead of simply pressing a button to pass time, you can now fly around the world collecting random resources by passing time. The main monetary resource this time around is called Supply.

In a similar design to XCOM 2012 reboot, you will need to expand your XCOM influence and coverage across the globe by establishing Resistance network, the wider your coverage the more Supply you get each month. You do this by flying to the continent’s region and establishing a Resistance network, provided you have sufficient resources, as the number of nodes you have has a limit. 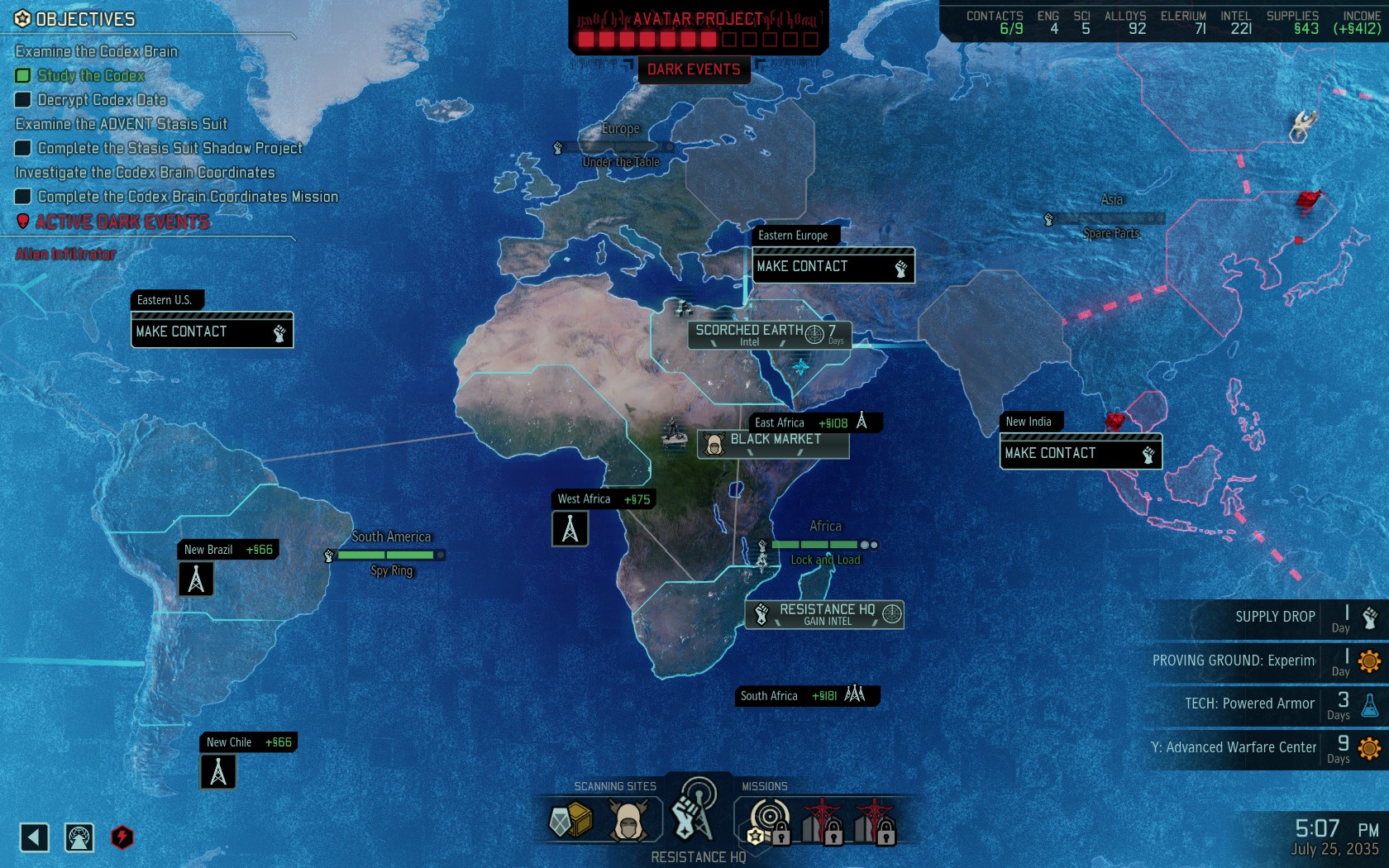 Battlescape
Battlescape is what I’ve called when your troop is deployed onto the battlefield in a turn based manner. Each side has a turn to perform actions until the battle is over either by the objective is met or all aliens is eliminated, or worse case all XCOM soldiers died or evacuated (withdrawn from batlle)

Much of the gameplay mechanics from the 2012 reboot of XCOM: EU returns, like each soldier have 2 actions to perform in turn but with a few tweaks. Instead of a soldier’s turn will end when performing certain actions like reload/heal other than moving, now a soldier’s turn will only end when firing. Timed battle is also making a comeback here, where you have a limited number of turns to meet your objective otherwise the mission is a failure.

A new mechanic is introduced in XCOM 2, which is Concealment. Your troops are concealed and hidden from enemy until you get close enough, breaking glasses or firing a shot. In the early parts of the game, it actually hinted you to setup an ambush by issuing Overwatch on your soldiers before firing your first shot, so that when Aliens noticed your presence while they’re running for cover they will get shot to oblivion from Overwatch reaction shots.

Also something new when you killed an alien, there is a chance that a loot can appear at where they died, and you have 3 turns to pick them up. This can be a weapon part upgrade, or a character buff upgrade. Weapons can be upgraded with parts looted from the battleground like scope which increases hit chance, laser sight which increases critical hit chance etc. while character buff upgrade called Personal Combat Sims (PCS) which can permanently increase your soldier’s stats like Aim/Dodge/Mobility.

Certain maps have Alien Towers, which a Specialist class can hack with a chance of success for a random tactical reward or the alien will gain tactical advantage towards you on the battlefield if you fail. In the early game, hacking a tower is too risky as the chance of success is way too low, but will be improved once your soldier has gained enough ranks or through an upgraded Gremlin, which is a flying drone device a Specialist class uses. 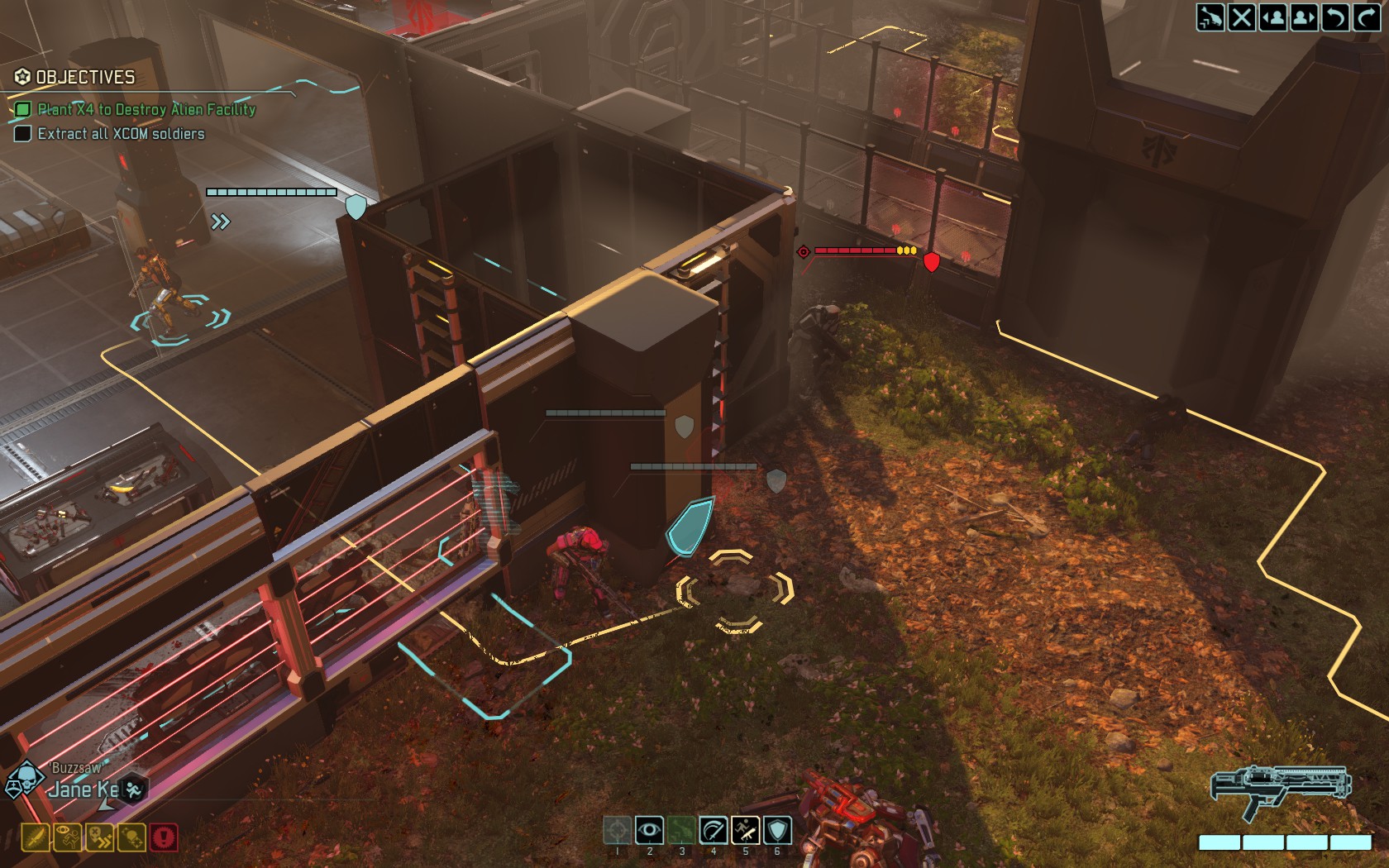 Customization
Customization is back in XCOM 2. Soldier’s appearance can be customized, including facial appearance and armor appearance. Since I’ve preordered the game, I also have access to The Resistance Warrior which gives the armor appearance of the soldier’s armor back in the reboot. This time around, you can even save a soldier’s custom appearance into Character Pool, which sort of like a template which you can easily import again when customizing a soldier in a new game. I always use a certain color on the armor for each class as this allows me to easily recognize them on the battlefield, e.g. Specialist/Medic will always be green.

Apart from the customization option offered on a soldier’s appearance, this time in XCOM 2 it can even customize weapons. You can change how your weapon looks by changing its color and applying a pattern, how cool is that ?

Outside of the game, XCOM 2 offers a wide range of tweakable gameplay options through its exposed .ini files in the game binary folder. Things you can tweak includes grenade explosion radius, ammo count per clip for different guns etc. This offers an opportunity for the modding community to come up with a mod for a unique gameplay experience. 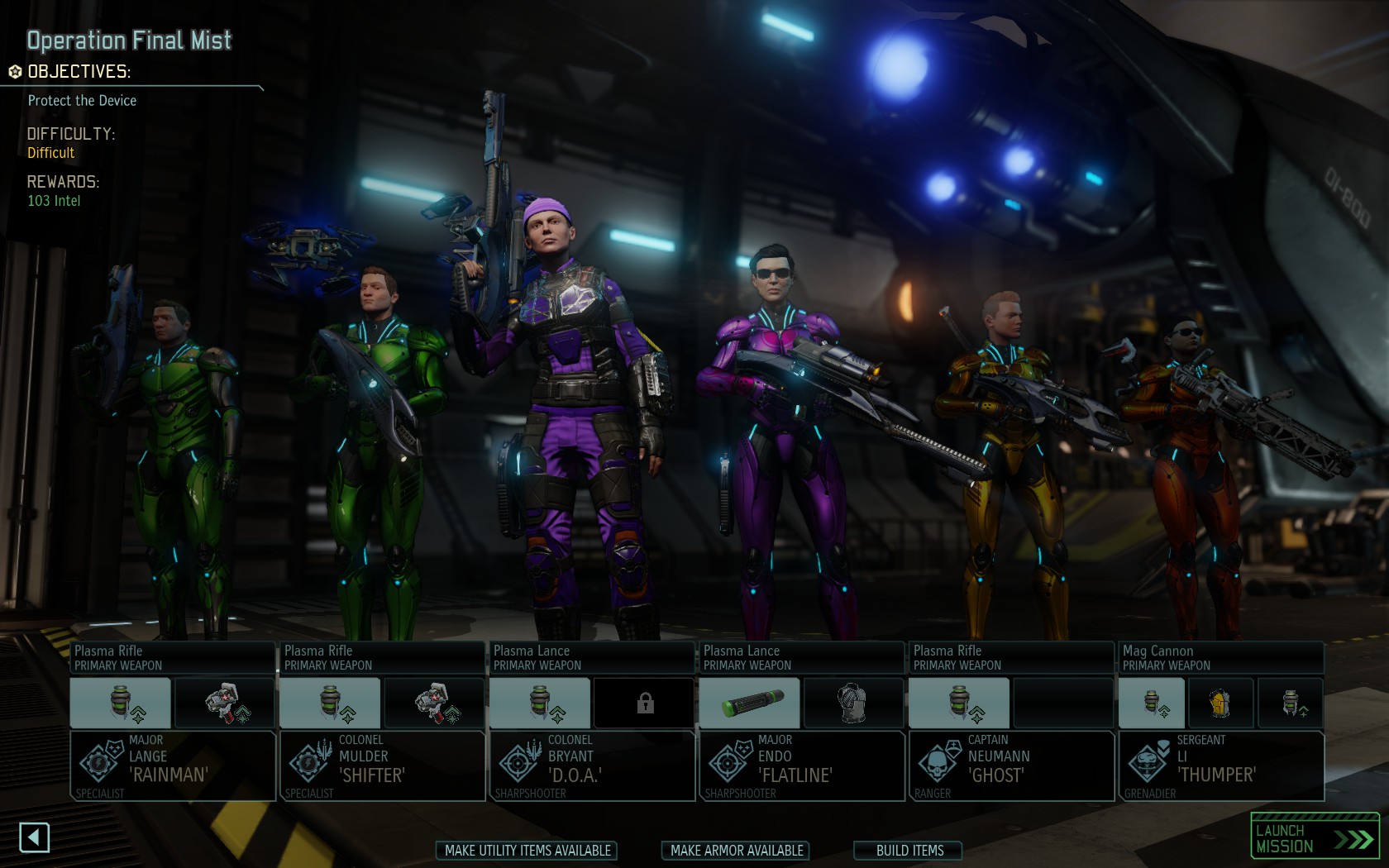 Overall impression ? XCOM 2 is certainly a step ahead of the original’s reboot in 2012, offering an even deeper variety of tactical gameplay. As I’m writing this while almost completing my first playthrough in Veteran difficulty (Normal), I can say with my experience from the original’s reboot, XCOM 2 is going to be very punishing for every wrong tactical move you are going to pay for it, with your soldier’s live.

One thing I particularly like about XCOM 2 is the music ! When I play a game, I pay attention to the music as well and will find out who the composer is and follow his/her works. XCOM 2’s composer is Tim Wynn, which I found out is the same composer for Red Alert 3. There is this music that plays every time you’re at the soldier selection screen before going to a battle that is so uplifting and really sets up the mood before going to the battlefield, and you’re going to hear this many times in a single play through. As I’ve preordered the game, I also have access to XCOM 2 Original Soundtrack. The track I mentioned here is called “Squad Loadout”, which is somewhat sounded different from the one in game, which is the same but better, I don’t know how to describe.

Apart from all the good things mentioned, XCOM 2 is plague with serious performance issue on day one release. The framerate is very erratic sometimes dipping below 15 fps for no reason. One of the reason I found out is that this game uses up to 6GB of memory when I inspected the process in Windows Task Manager. As I only have 8GB of system memory, this causes framerate stuttering due to hard disk memory paging. I hope these issues will be addressed in coming patches.

There are also some noticeable bugs through my first game place. The game has crashed to desktop once, soldier animation when firing suddenly gone missing and when salvaging resource in Geoscape the timer suddenly become -1 Day and breaks the game that I have to load a previous Autosave.

My scoring may be biased because I liked XCOM since I’m young, apart from the technical issues which I believe can be addressed in future, I’m going to give XCOM 2 a score of 9 out of 10. 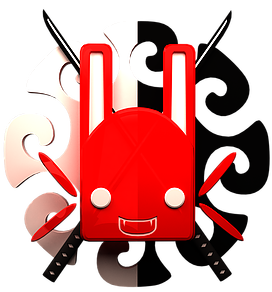