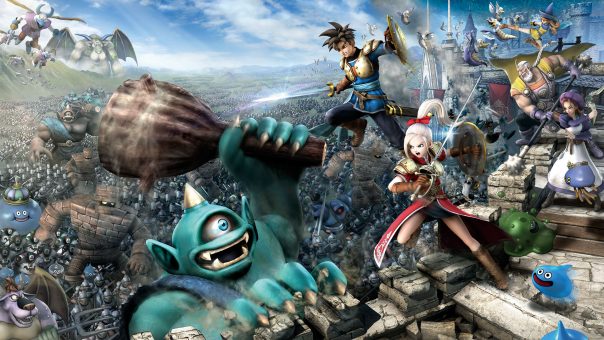 Review : Dragon Quest Heroes : The World Tree’s Woe and the Blight Below

I am new to this franchise, so I didn’t know what to expect and I can’t compare it to the older Dragon Quest series of titles. So anything I am about to share, would be purely from a newbie’s point of view and of what captured me and what did not.

Akira Toriyama as the Character Designer was enough of a reason for me to buy this game and certainly , it did not disappoint. I shall elaborate further on this later on. So my first Impression on the game was, well it looked amazing. The colours, environment, mobs, characters, buildings were all well done. Though Graphic wise one may say it did not properly represent itself as a mesmerizing new gen console game, but still it looks cheerfully pleasant in the eye. Some may say this game is like half of what Dynasty Warrior games are like but let me give you a more accurate comparisson. If you have played Ragnarok Odyssey Ace before on the PS3 or PS Vita, then Dragon Quest Heroes is 80% like that. Combos are made by combining a series of taps between the Square and Triangle button and skills are launched via R1 and Square,Triangle,Circle buttons mixture. Seriously, its a simple fighting mechanic. Let it be clear though, that even when I said its a simple fighting mechanic, I meant no where near that the fighting part isn’t fun. 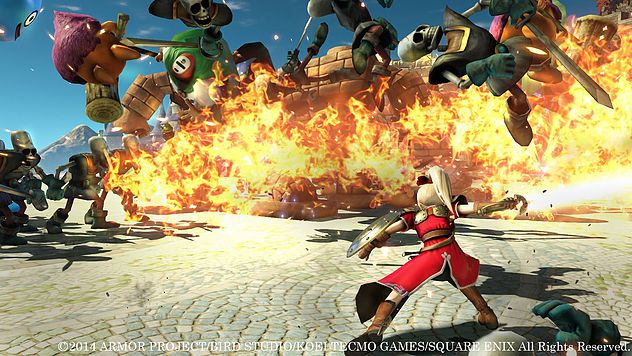 Coming into fighting, I must say this game has one of the most exciting fighting phases I’ve ever seen. The fact that you have more than 10 characters in which you can choose 3 to party along side your main character while questing is simply exciting! All the characters have different skill sets and could affect the gameplay differently, so it is safe to say you could mix and match whichever characters into your party that would suit your game style best. Also worth noting is that you can switch between characters while in battle, making sure you can utilize each member’s potential at its fullest. Other than your own character and party members, you can also make use of Monster Medals you pickup in the game to help you out! There is a chance of Monster Medals dropping as you kill the mobs, you may use these medals to summon them to fight along your party. Yes, you may also play this game tower defense style by placing these monsters at strategic points.

Quest objectives in this game are rarely boring, most of the time you are required to defend an objective while fighting furiously against swarming wave of mobs. Though I did say graphic wise this game did not properly represent a new gen console game, in terms of A.I though I think they made a good job. Mobs swarm in by the hundreds and from different location at once. All these elements combined and you get a classic hack and slash style RPG paired with a modern level of intense gameplay!

Combos are easy to execute and easily understood, however it still gave me a good sense of satisfaction when launching skills. Nuff said about the battles, its all fun, just fun.

For the Fans of Akira Toriyama’s work, well you will not be disappointed. Some of the Characters would Immediately remind you of his famous work, Dragon Balls. Even some of the character’s fighting style and skill effects! Sometimes little bits like these is what made me smile from time to time. Check this screen shot below…. Ka…Me…..Ha….Me..just kidding HA-ha ! 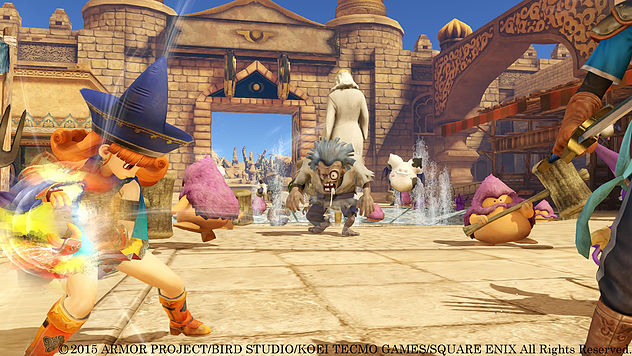 On the down side,

Weapon and Gear system in Dragon Quest Heroes is very very primitive. There is no upgrade system and no card /gem system available, you only get better gears from buying it form the NPC. A.I does not drop gears, they onlydrop recipes which you can use to craft accessories. I felt utterly useless in terms of gears customization.

Among other things that made me wish the developers would reconsider in their next project of Dragon QuestHeroes 2 are the fact that the NPC can be too long winded at times. When selling items especially, they should havean option where you can easily sell your items without having to click through the entire conversation box. It can beannoying when you just wanna jump back into action.

There are also no multiplayer mode available, not even split screen co-op. Its actually a shame, a game like this would be so much more fun if it has multiplayer co-op or competitive pvp modes. Dayuumm.

Replay Value : 2/10 – There is no difficulty setting when you start the game. Basically you can just platinum this game in one sitting. I’ve read it takes 50-60 hours to platinum this game, but I am sure it can be done faster.

Pros : Pleasant Graphics, good Voice Over all over, Simple yet fun fighting mechanics, plenty of characters to playand experiment with, Players may re-visit previous areas by visiting the free mode and hack and slash and smash andslam all you want as the mobs spawn non stops. Monster Medal is a creative addition to the fighting mode and theskill tree is easily understandable. Overall the game is fun to play and there is a good storyline to enjoy.

Cons : Primitive weapon system. No upgrades, no refine, no gems, no cards. NPC too long winded and difficult toquickly navigate through the dialogue when you want to sell/buy an item. BGM sounds dull . No Multiplayer elements at all. Not even a leaderboard.

Evil West Review – Nothing Stays Dead In The West