First person shooters are abundant in gaming world right now. With games from casual shooter Overwatch, to MMORPG shooters like Destiny, where does Call of Duty stand in its once pioneer genre?

Over last 2 weeks, Call of Duty: Infinite Warfare Multiplayer Beta was release for PS4 and I took the opportunity to try the game and see how it stacks up with games. Being a veteran Call of Duty player since Call of Duty 1, I was eager to find out is the the game which pull me back after I skipped Black Ops 3. Note that this is a Multiplayer Beta only Review and not the single player campaign. 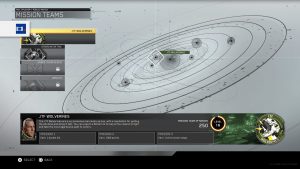 When you first boot up you are treated with a lot of video tutorials which you are unable to skip which makes no sense or meaning as far as I can tell. Then you are place in a Mission Team. The Mission Team feels something like Planetside factions but it was not fully explain for what in the beta. Once you got control back, you are off the Multiplayer.

Let’s talk first about the avatar itself. Let me say this beta shown one of the weakness character customization. Before that, let me introduce the new Combat Rigs which are essentially the same as Specialist class is in Black Ops 3. The customization is limited like in Black Ops 3 in this game because of Combat Rigs, so you only able to make slight changes to the color of your rigs. 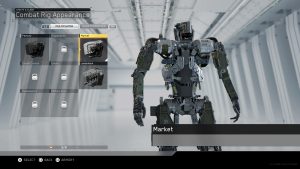 After a while everybody is gonna look to same unlike how Advance Warfare where people can create own logos and art. Even worst now is that since your character will be in full suit, there is no facial expression which somehow make the models look generic and cheap. This make connecting with your own avatar a little difficult. 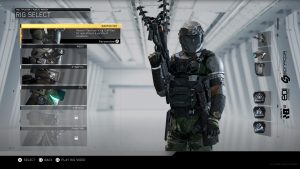 Combat Rigs as stated are the same as Specialist in Black Ops 3. The difference is now you will basically have a passive and active ability together. Each rig comes with its own load out for 3 passive(Traits) and 3 active skills(Payload). 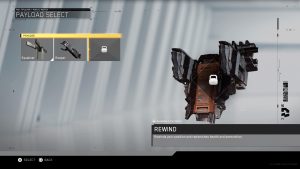 Payload selection. 3 types to choose from.

For example a Warfighter can have a Claw active skill which is gun which has a fast fire rate and the bullets will ricochet or the Combat Focus active skill which allows you to receive double killstreak scores. On the passive side, Warfighter has Ping which reveals enemy location around the person you just killed or Persistence which basically stop reseting the killstreak score but the score needed for the killstreak is increase. 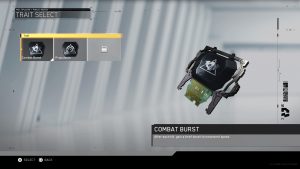 Which combination of active and passive skill is up to you, and since there are 6 rigs in the beta, there is basically 18 unique payloads and 18 unique traits. Each rig will have 36 combination which is a lot to be honest but there is a big drawback which is the balancing of Payload and Traits. Some of them are obviously overtune and brings big benefits to you and your team. This means there will be only certain combinations which will be use instead the fun mix and match. It wont be too long for people to find the best Payload and Trait for each class and will stick with that. 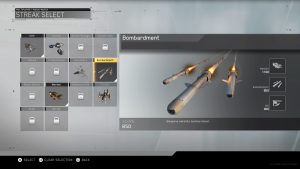 After fiddling with Rigs, we now go to the normal loadout customization. It uses back the point system so it is all too familiar and players from previous games would not get lost in it.

Weapon Variants are back. Each weapons has up to two build in perks which does not require any loadout points. The some of the perks on weapons are mind blowing from creating a anti-UAV field around you when you kill a person to having maximum range. If you are a Destiny player, some of these perks will sound familiar. 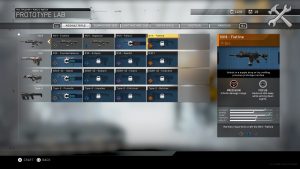 Weapon Variant Crafting Menu. You need a total of 5540 salvage points to unlock a tree. THAT IS A LOT OF POINTS

Earning this weapons are no easy task either. The first way is by crafting using salvage points. These points are given each time you level up your Mission Team, from supply drops or dismantling duplicated items you receive form supply drops. After that you need to craft the weapon variants following a tier list from Common, Rare, Legendary, and Epic. So for example you want the Epic variant, you have to craft the Common, Rare and Legendary before crafting the Epic which in the end will cost you 5540 salvage points per tree. 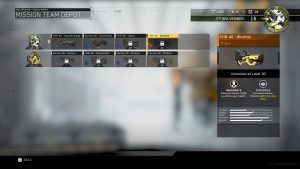 Mission Teams also has weapons variants and it unlocks each time you reach a certain level on the team. 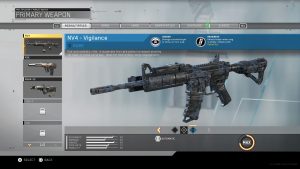 No drawbacks baby. Why would I use the regular one?

The problem with the system this time around is the weapon perks has no disadvantage. During Advance Warfare, if the gun has for example higher fire rate, it usually have a stability penalty or something like that. This time around weapon variants are just better weapons. This causes a lot of issue for balancing also. Also the weapon variants is not noticeable during gameplay so there is no chance to counter or avoid the player with better Weapon Variant.

So supply drop is back and not in a good way this time. Earning the customization stuff is great non the less, but where this system fails is how you earn a supply drop. Last time in Advance Warfare, you earn supply drop base on time played not performance. True you can buy them but at least no matter how bad you are, you will still get a supply drop. 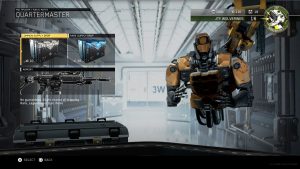 All bout them keys 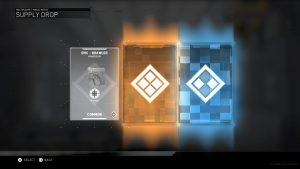 RnG Goodness. Do not let the colorful light fool you.

Now what makes this worst this time around is the items in the supply drop, they included calling cards and emblems which makes your chances even lower to earn what matter the most which are weapon variants. I open 3 rare chest and only got a 1 rare weapon variant and an epic calling card. So this brings me to the next issue. 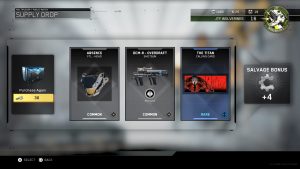 Yup that is a rare calling card for 30 keys. Keys and time farming worth spent.

It is a worry trend how Infinite Warfare is handling its Supply Drops. Seeing how powerful Weapon Variants are and how the only way to earn them is from Salvage Points or Supply Drops. This creates a Pay to Win eco-system which will give paying players an advantage over non paying players. True the Weapons Variants can be earn by grinding but now that the amount of salvage points and keys are tied to your performance, and playing with better gear players will hinder the performance so it will be a long grind. This creates a huge game balancing problem where a players with better gear will always beat a player with worst gear if placed in a same situation.

After all 2 weeks, it is hard to see Call of Duty: Infinite Warfare multiplayer as the pinnacle of PvP shooters. No innovation has been made to the gameplay compared to Black Ops 3. The pay to win and Weapon Variant makes balancing a issue. I know this game is broken into Single Player Campaign, Zombie Mode and Multiplayer but if you are looking to buy this game for the Multiplayer, I would suggest just sticking to Black Ops 3 or trying out the remastered Modern Warfare Multiplayer.

I hope the other modes brings this game value up and maybe save what may be one of the worst multiplayer in Call of Duty ever.

PS – The full retail version will be review by our BunnyTeam member Arqrez when it launches.