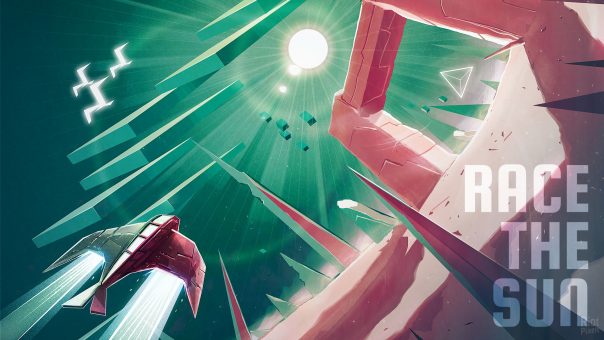 Race the Sun on PSVR

In case you have no idea what kind of game “Race the Sun” is, well its a “Racing” game where you race against.. the Sun…. hence Race the Sun.. it literally means just that. You take control of a solar powered aircraft and have fly as far and fast into the horizon as you can, just so that the sun remains visible (hence powering your aircraft). If you are too slow the sun will set and well, game over. To keep you in the race, you will need to pick up “Power Ups” that are scattered around and they give you “Speed Boost” among a few, that helps throttle you forward and that keeps the sun over your head.

Here is an Imba guy playing Race the Sun. Not me.

You need to imagine a little really, you may start with imagining the Earth is Sphere shaped (duhhhh!) and as you keep flying forward at a great speed, the sun will literally not set because you keep chasing up to its setting point. Earth is flat believers will not enjoy this game. Nuff said.

And oh, In Race the Sun, there are plenty of obstacles, some of them stands still and some of them moves. So yes, if you crash, its a game over. You start all over again from the beginning, no checkpoints. Sounds easy? Wait till you play it. The game is already difficult as it is but the developers went the extra mile to make it extra “Exciting!” for all of us by giving the game a VR Mode.

And here is a noob playing no PSVR who never got passed Stage 4. Now this is me.

So how did it feel on VR? I gave it a go last night and to my surprise it actually feels kinda nice. Don’t get me wrong, its still scary once you reach a certain stage but the First Person view on VR actually helps alot because you can estimate the distance better. And with that estimation, you can react properly to avoid or jump over the obstacles. Its alot of fun really.

If you played Race the Sun before, you’d remember this flying bird that poop crystals. On VR Mode, you can actually look to your left or right to see if the bird is on that side of the map and navigate your aircraft to that side and wait for it to poop. This is definitely a nice addition on something you are able to do on VR. It is also one of the main reason why I crashed most of the time. Don’t judge me!

One of the major difference between the Normal and VR Mode is definitely the distant perception. On the normal mode it was more difficult for me to decide when exactly to execute a turn or if I could make that tight gap. On the VR Mode however, it gave me more confidence in decision making (especially when i have to decide in less than 1 second before impact). Playing on VR Mode also brings a new level of adrenaline rush!

So did VR Mode adds on to the gaming experience in Race the Sun? Definitely. Best thing is, you don’t even have to pay extra for the VR Mode if you already owned the game.

Here is another guy playing on Apocalypse mode. Not for those with a weak heart.