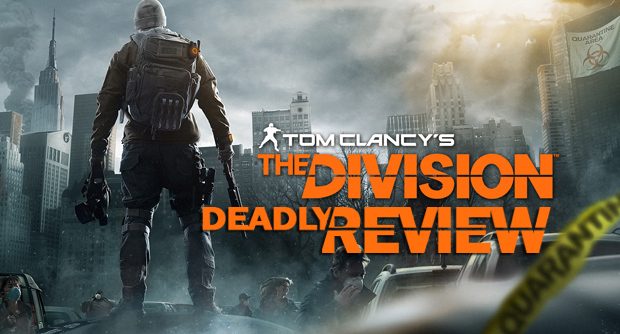 The Division: Closed Beta So about 12 hours into The Division Beta, here is my opinion about this game. I will divide (no pun intended) the game into few sections and please note that all things reviewed might already be fixed in the final product (and hopefully they do) 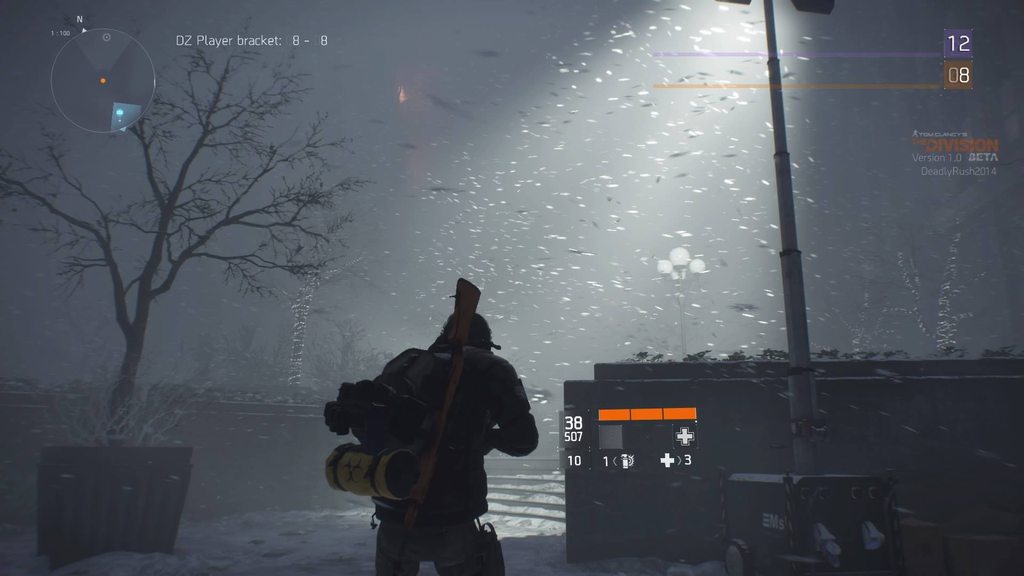 Let’s start with the graphics for this game on the PS4. After watching Ubisoft Downgrade the graphics for Watchdogs, it is not surprise that The Division also gets the same treatment. Make no mistake, it looks nice, but it is no E3 level. It is more surprising also that the game runs on 30fps and has some input lag on the controls. If you look for next gen graphics in a third person shooter, this is not the game you should put your hopes in. 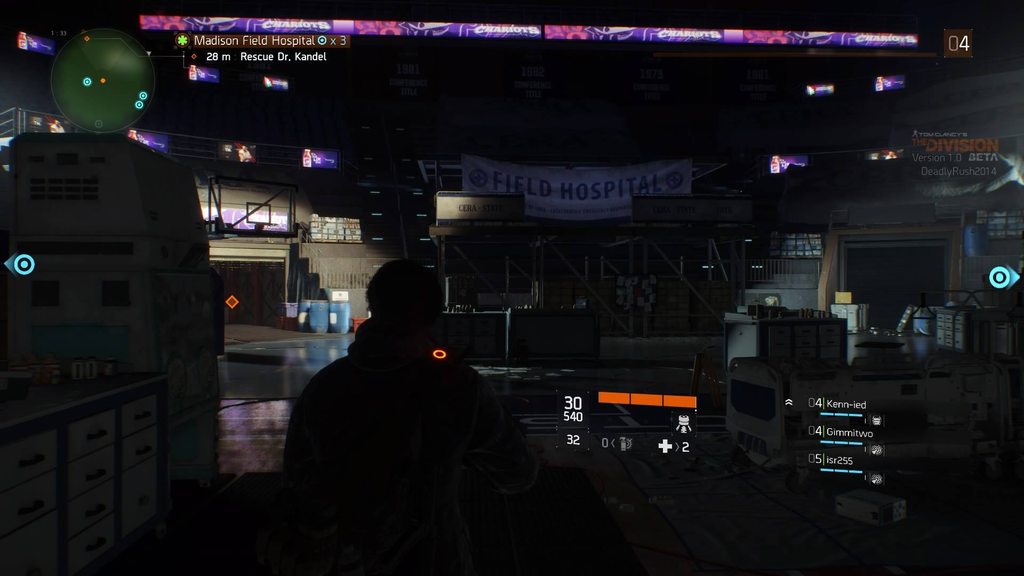 Who is going to clean up this mess in the hospital? Wait why is there a basketball court in a hospital ?

The story in beta does not tell much about the story-line but they do show how it might work. The only story mission in beta upgrades your base by 10% out of 300% (Three base aspects), but there is a side mission that was a little more interesting. This side mission uses the ECHO ability to solve a mystery or to help find a person. This for me was a more interesting than the main mission of upgrading your base. Hopefully we see more of the ECHO use to expand the story 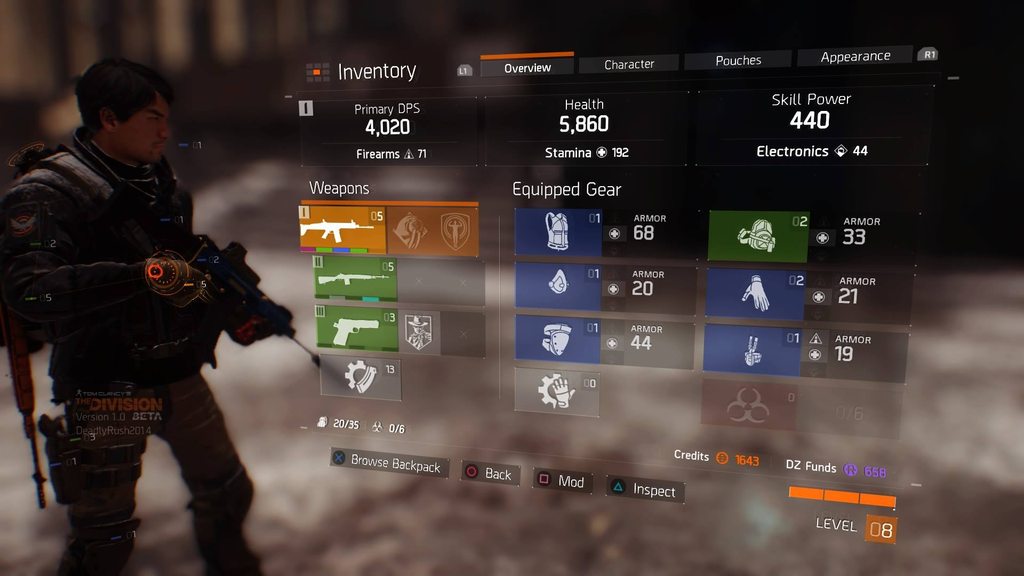 These stats will go up when you level up and can also be increase by equipment’s. Each non weapon equipment also has armour stats which reduces the amount of damage you receive. There are also other stats modifiers like critical damage, critical chance, headshot damage and etc

There are 3 talent trees in this game,

In the beta, we get to use 2 Medical skill, 1 Tech kill and, 1 Security.
Each tree feels unique so far and looks interesting in character development.

Gameplay
Now to the gameplay, seeing three person shooters are nothing new, The Division takes the best of the game mechanics and improve on them. The cover system is one of the best so far. Moving from cover to cover is smooth by just selecting you next cover point and holding ‘x’to change cover. In combat, you are allowed to hold up to 3 skills (1 skill slot was locked in the beta), using them are as easy as pressing R1 and L1. Tapping the button will self cast but holding the button will allow you to aim to a location if the skill has range.

How you manage your main stats will affect you and your team. Having more firepower allows you to be a glass cannon, dealing massive damage but you will be taken down faster than anyone on your team. Increasing your health will make you a tank that soaks damage but you will be lacking some firepower. Skill power will affect your abilities from your sticky bomb damage to the amount of healing you do. Each main stat affect your gameplay and makes the team dynamic unique. 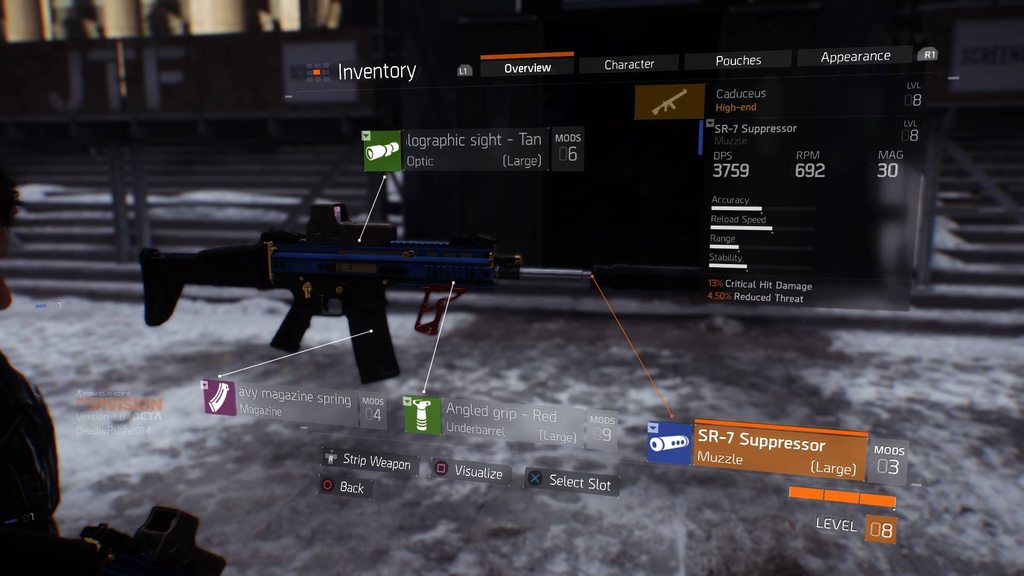 Weapon Mods
Guns in this games feel different… not unique, just different. All guns are real life guns so there is no WOW factor to the appearance but each has it charms. Each gun can have up to 5 mods. You can mod, the color, Scope, magazine, grip and muzzle. Scope changes your first person view. Without a scope you cannot zoom in (L3). Take note that changing your scope does not change your third person crosshair though, only your first person views. Magazines has modifiers for your magazine size to reducing reload time. Grip helps with stability and muzzle reduces threat (No info on this sorry. Just some stat) to increasing critical damage. 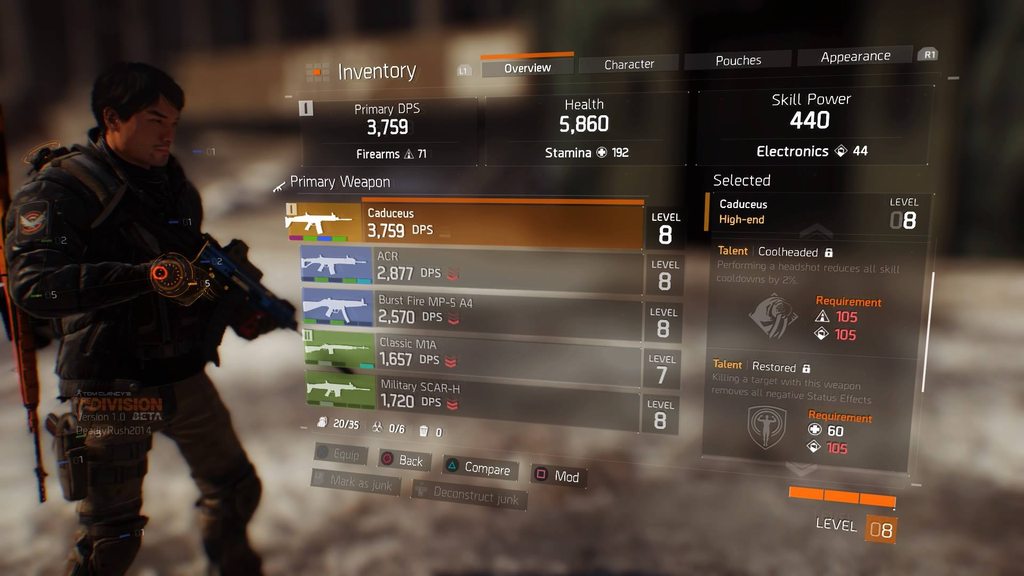 Each equipment including your weapons and mods has a rarity. There is common (grey), uncommon (green), Rare (Blue), Epic (Purple), and legendary (Orange). The only thing that is important are rare and above where these equipment will have a talent or extra modifier. Rare will have 1 talent, Epic will have 2 talents and Legendary will have 3. The talent on each equipment will only unlock if your main stats matches the requirements of the talent. The variety of talents can be from healing when you get the kill or reducing your skills cooldown, etc. 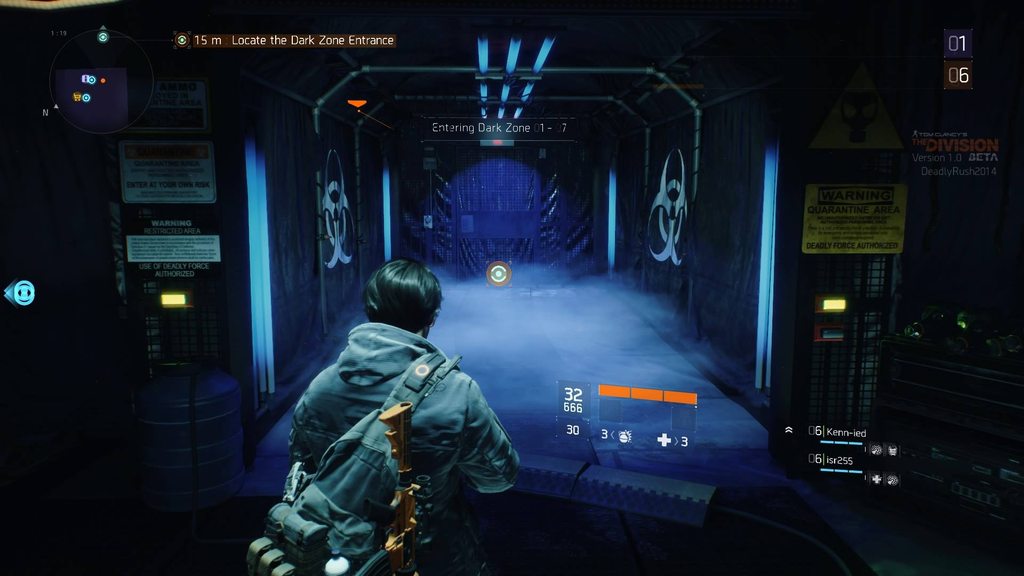 Welcome to The Darkzone

The darkzone is where the fun begins. It is basically an open world PvP. This zone has a different experience bar, currency and rules. Dying in this zone make you lose darkzone experience, darkzone currency and any loot you have not extracted. Extracting a loot is what make the darkzone dangerous. Having a lot of people not knowing who will steal their stuff before you manage to place them on the helicopter is scary. I play the darkzone solo for 6 hours and defending the zone from rogue agents was one of the best things in the game. It is a big disadvantage playing solo obviously but it is fun nonetheless.

You can hear voice chatter if other players are using the ingame voice chat and team up with them if they are on a different party. Small touches like this makes the game feel slightly more alive. Shooting an innocent agent will turn you into a rogue. The longer you shooter the longer you have a rogue timer. If you manage to hide or run until the timer runs out, you will be able to keep any loot you steal from other players, but be warn, you will have a handsome bounty on your head which will cause people to hunt you down. One thing is I found out is that people can force you into rogue status. While you are engaging with in fire fight with the enemy, if a person walks into your line of fire constantly, you will turn into a rogue. I hope this system will not be abuse to steal loot form people in the future. 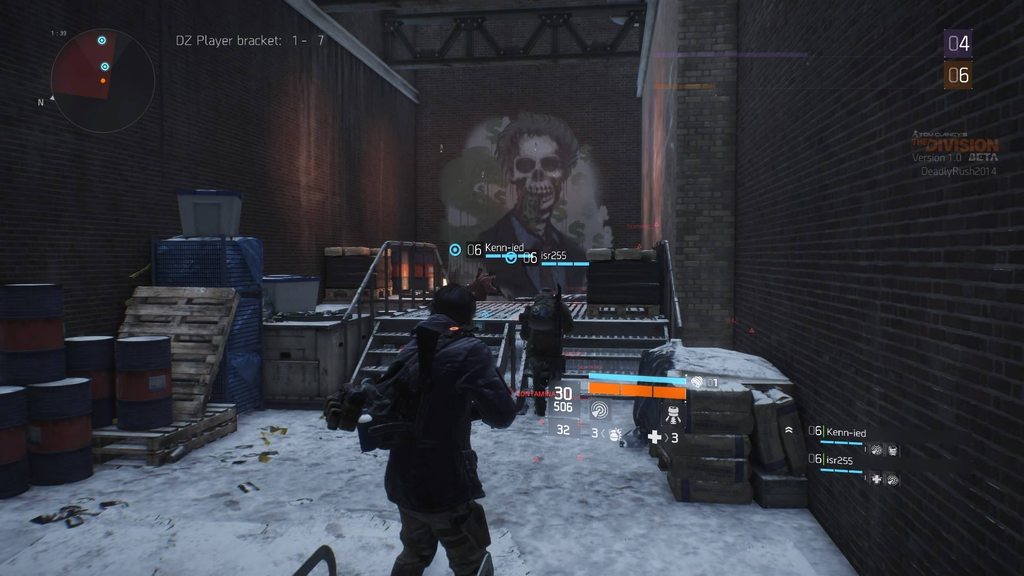 The Division has one solid game mechanic going for them. The graphics are okay but they put a little effort by adding weather changes from rain, to snow or day to night. For me personally what makes this game special is how they handle the character progression and may be the only thing that will make or break the game. Many people will be comparing this to Destiny but this game should be view on its own. If you like a third person shooter with RPG elements, this might be the game for you. Hopefully what I’ve seen in the beta has been improved before the game releases.