Kena: Bridge of Spirits is Ember Lab’s first child as a game developer and the team did a good job in bringing their past experience as an animation studio to give them an edge. That said edge then resulted in one of the most beautiful and colourful game worlds I’ve seen, but since this is a video games review, I’ll be exploring more than just the eye candy bits 😉

My wife and daughter were beside me when I fired the game up the first time. They had insisted that I get the game since they both fell in love with it the first time they saw its reveal trailer. They both love the main character Kena’s appearance and of course, those tiny adorable critters from the trailer. It didn’t take long for the game’s art direction to completely win us over, in fact, it was a short as just 15 minutes.

The lush green forestry and grass that feels like they came straight out of a Dreamworks or Pixal production was relaxing to look at and even more wonderful to explore in. It didn’t take long before we found and befriend our first adorable friend, or Rots as they are known in this game. My 5-year-old daughter went absolutely mental as she watch that first Rot following Kena around. Then we found the second one minutes later, and their numbers kept growing as I played on. Wherever our character goes, our army of Rots faithfully follows. It was great.

Our Spirit Guide had just arrived at what was evidently a very beautiful village once upon a time. But the land is now corrupted by a mysterious cause and it resulted in many areas being blockaded by the effects of the corruption. The village and its surrounding area are plagued with enemies that manifested from the bad energy. Kena is soon met with what looked like a pair of siblings and upon receiving a request from them, sets out on a chain of quests to purify the land as well as guide the spirits she meets along the way to the other side.

Throughout the game, I’d explore the beautiful world Ember Lab created – following the main quest to unlock one area after another, scale from the edge of a cliff onto another, and solving puzzles that seems brilliant at first but quickly feel overused after a while. Spirits could be bound to the living realm for many different reasons. Some find themselves unable to move on due to grief too great to let go. Some, a regret too much to forget. And there are those who find themselves unable to depart because their other half couldn’t. Kena could help them move on by exploring the past of these spirits and help them depart using the most ironic method – literally beating them up until they come to their senses.

Kena has 3 main weapons at her disposal. A melee staff where she serves Light and Heavy attacks, a bow that unlocks later on in the game, and a spirit bomb that comes even later. The melee attacks consist of Light and Heavy attacks movesets that oddly feel similar to the basic attack moves in The Legend of Zelda, Breath of the Wild. The bow play feels like Ember Lab ripped a page right out of Guerilla Cambridge’s Horizon Zero Dawn and the Spirit Bomb that again reminds me of BOTW’s Remote Bomb. To spice things up a little on the combat front is a skill tree where I could purchase powerful attack moves, or an extra arrow or two for my quiver.

The game also integrates Rots into combat and I could order them to do certain tide-changing actions, provided I’ve accumulated enough energy to do so. Energy is accumulated upon every successful hit after which I can get my army of cute companions to disrupt an enemy, or to infuse them into my attacks to deal high damages. Combat-wise, the game is easy to understand because there isn’t much for us to do anyway, it’s just a repetition of a limited moveset until the opponent dies. Kena could deploy an energy barrier to shield herself, and deploying it right would parry an oncoming attack and allows Kena to retaliate with a counter. But the dumb thing is, the shield doesn’t always deploy successfully. It feels like there’s an animation lag stopping it from coming out whenever I want it to and this usually leads to my death. Rolling away became my staple move when escaping. Boss fights can be very challenging for both good and bad reasons in my experience. The good thing is, as much as fighting normal enemies reminds me of Breath of the Wild and Horizon Zero Dawn, Ember Lab decided to be creative when it comes to boss fights – by making it seems like Dark Souls. It isn’t as hard as Dark Souls per se, but it does feel like that. Bosses have ridiculously wide hitboxes, unforgiving speed, and deal very painful damages. They are not impossible, but it did several tries for me to down each of them. On every restart after dying unceremoniously to a boss comes a new problem. For some reason, the game decided to replay all the pre-fight cutscenes. Yes, they can be skipped by holding down a button (thank god!) but still, it’s very annoying when you are on your 9th attempt. I wish skipping was just a tap away instead of holding the button down.

For me, the game is conceptually refreshing. Bridge of Spirits is a tale told in the fabric of humanity’s oldest religious practice, Shamanism, an area rarely explored today. The game carries a message that we ought to know when to let go and move on, and how being overly obsessive over the past results in more harm than good. But even when it could, the game doesn’t bore me by overly preaching any philosophies nor teachings. I quite appreciate how Kena’s journey and action in the game revolve around the bigger and deeper theme and yet it doesn’t feel forced.

Most of the dialogues exchanged in the game are done in short and straight-to-the-point communication, rarely wasting any time. But while I appreciate the short banter, I did hope the studio would take more time in sharing the lore and background of the beautiful world they’ve worked so hard to create. Because other than the dialogues in the game which I’ve said is short and has some cutscenes, the game doesn’t share anything else. Not in the form of readable collectibles nor any digestible content. I’ve found myself asking so many times “What happened here?”, “who used to live here?”, “what was life like when there was a life?” and got no answers. I’ve played and finished the game but it still feels so distant and unrelatable

When I’m not fighting enemies, I was busy exploring the beautiful game world while enjoying the nice background music. The game has some of the nicest music I’ve heard in a game but the selections are too few in my opinion. Its soothing mostly percussion-based instrument blends into the game’s environment and theme perfectly and really set the mood. I only wish there was more. While the landscape is breathtaking, exploring it didn’t yield as much satisfaction as I thought it would. The only two activities available are hunting for treasure chests that grant a certain currency we could use to buy hats for our Rots (purely cosmetic) and mostly hunting for more Rots to grow my army of adorables.

What I Wish Was Better 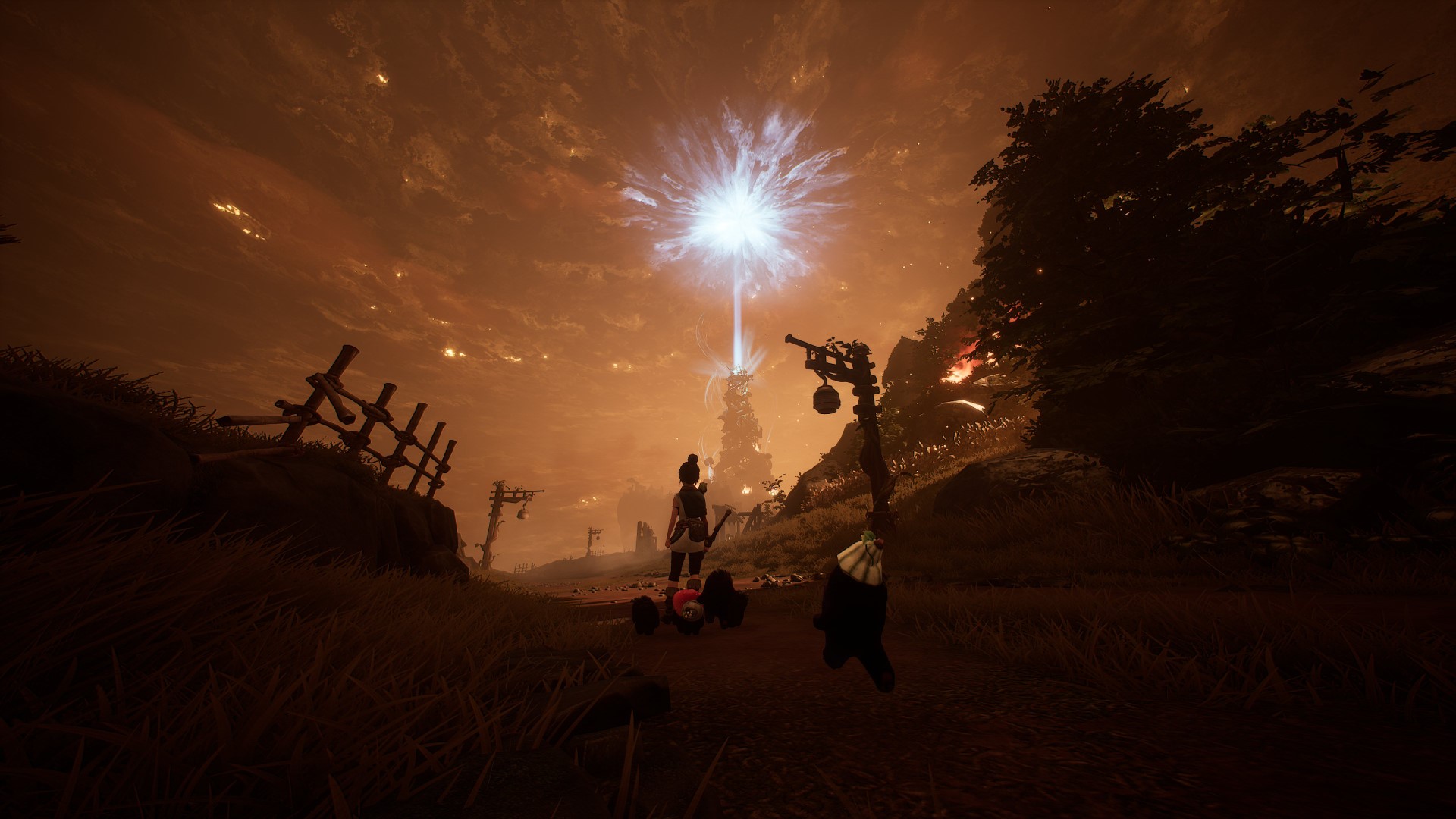 Ember Lab’s Kena: Bridge of Spirits has all the flair and flamboyance of a Hollywood production that is beautiful to look at and explore, but that’s about it. The title sometimes feels more like a movie with minimal gameplay features that just barely qualifies it as a game. The combat is fun and easy to understand but they are also dumbed-down versions of mechanism that we’ve seen before and although still quite fun to play, the game doesn’t have anything that stands out uniquely combat and gameplay-wise. But taking into account this is a debut game by a studio with no prior game-making experience, I would say the foundation they set here is solid enough to set them on an upward trajectory for their next project.