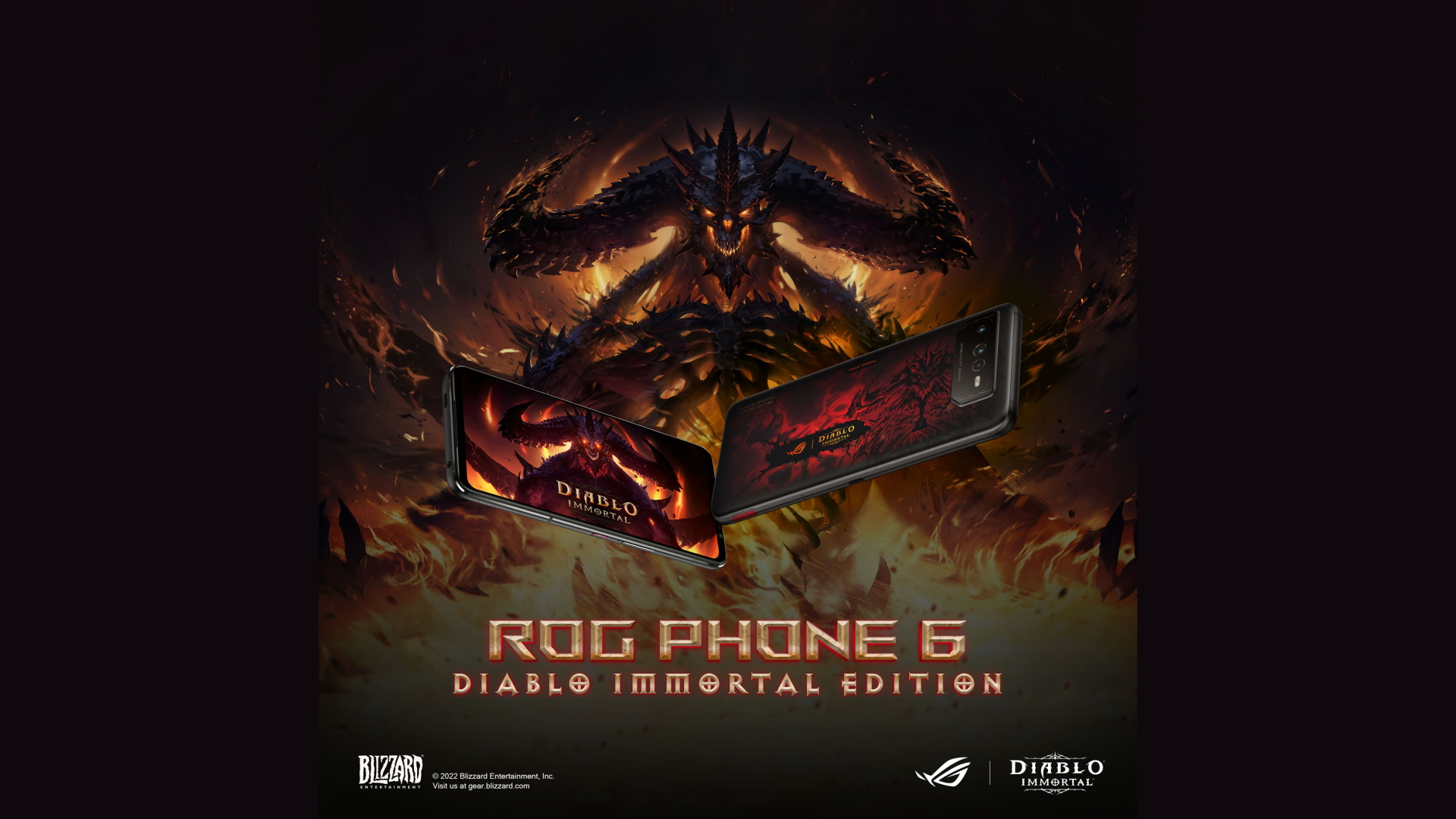 Republic of Gamers (ROG) and Blizzard Entertainment has announced the ROG Phone 6 Diablo Immortal Edition, an exclusive limited-edition version of the new ROG Phone 6 gaming smartphone. With its unique Diablo-themed design and a treasure trove of themed accessories, this unique phone is a must-have item for serious fans of the Diablo universe.

The ROG Phone 6 Diablo Immortal Edition features details that echo the long-running Diablo combat quest, with its nightmarish menagerie of demons and monsters. The phone has a special flame-effect finish that varies the luminance of the red flames as the viewing angle changes. The custom Aura RGB illuminated logo is an outline image of the mobile game’s title, and the Diablo Immortal theme continues in the custom user interface, with its exclusive themed live wallpapers, icon styles, animations, sound effects and more.

Fans will appreciate the unique matching themed accessories, which are based on legendary items found in the game. These include the Shield Blessing Aero Case and a map of Sanctuary, both featuring hidden marks in invisible ink that can be revealed using the Fahir’s Light torch. There’s also a uniquely crafted Immortality Ejector Pin that’s fashioned after the game’s logo.

The ROG Phone 6 Diablo Immortal Edition has been completely redesigned to evoke the nightmarish world of Sanctuary, which is under siege by the demonic hordes of Diablo, the Lord of Terror.

The special finish of the ROG Phone 6 Diablo Immortal Edition features graphics that echo the iconic combat quest with its terrifying menagerie of demons and monsters.
The phone also gives fans a special user experience and a custom user interface with the exclusive Diablo Immortal animated theme pack. This features live Diablo wallpaper and a redesigned app icon frame, and when the phone is being charged there’s an exclusive sound and animation that includes Diablo-themed elements.

The extensive themed accessory set is the jewel in the crown of the ROG Phone 6 Diablo Immortal Edition. The exclusive carton design is inspired by the famous Horadric Cube, a valuable in-game item that can transform anything placed inside it. The phone itself is stored safely in a box modeled on the legendary Worldstone. And a map scroll depicting the world of Sanctuary features hidden marks in invisible ink that can be revealed using the bundled Fahir’s Light torch.

The Shield Blessing Aero Case is a protective bumper case featuring a geometric relief of the teleport, with a unique effect that shines when illuminated by Fahir’s Light. The hidden inner part of the case is printed with a special ‘easter egg’ in the form of an image inspired by the Lord of Terror himself.

Even the SIM removal tool gets the full Diablo treatment: with its Diablo emblem design, the Immortality Ejector Pin is a fitting addition to the outstandingly designed accessory collection.

The ROG Phone 6 Diablo Immortal Edition is based on the highly-acclaimed ROG Phone 6 series, featuring the same technical specifications to deliver extreme mobile gaming performance. It’s powered by the Snapdragon 8+ Gen 1 Mobile Platform. With 16 GB of LPDDR5 memory for smooth app switching; a high-tech cooling system; a powerful battery for effortless marathon gameplay; and unrivaled AirTrigger 6 controls for a console-like gaming experience, the ROG Phone 6 Diablo Immortal Edition is ready to battle the forces of terror! 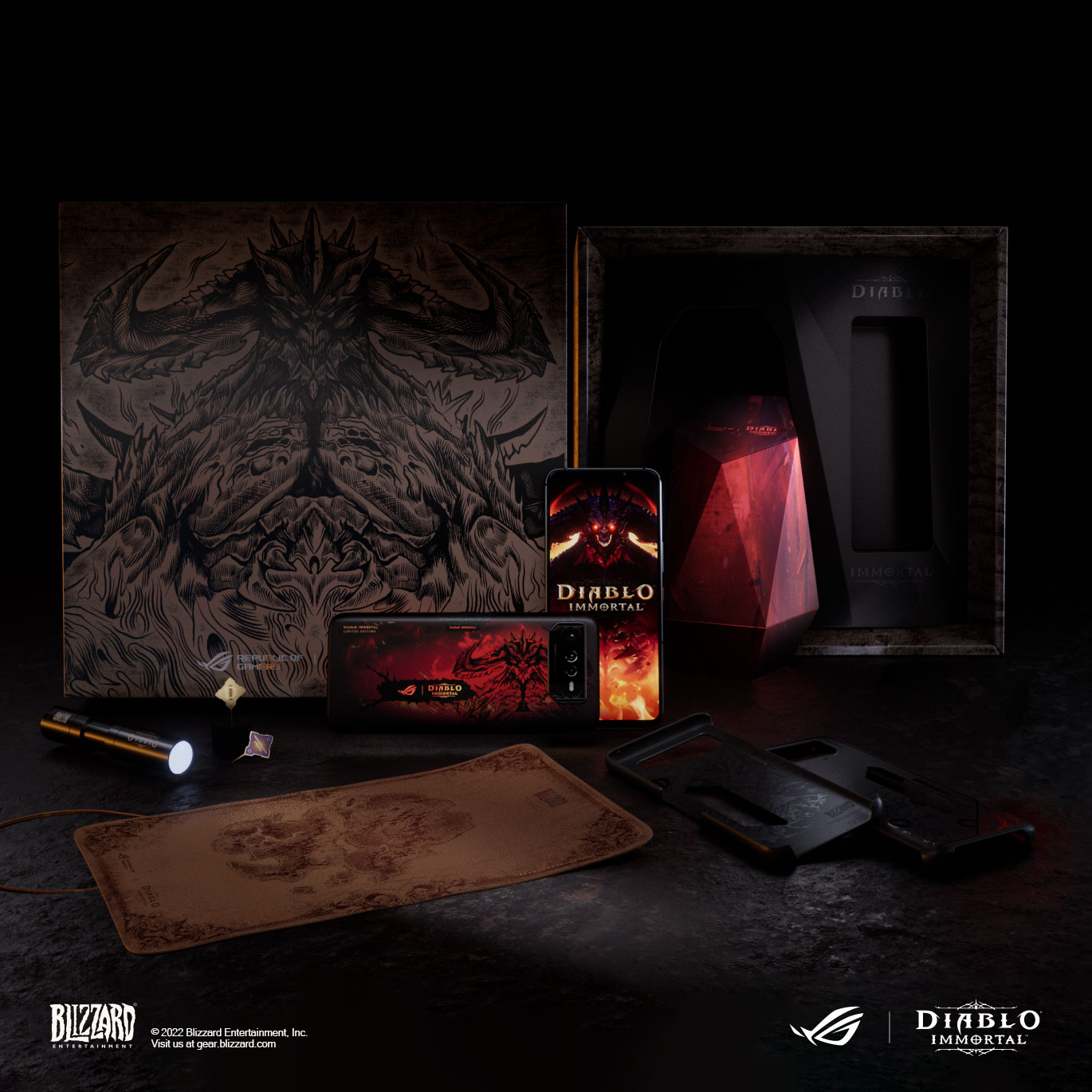