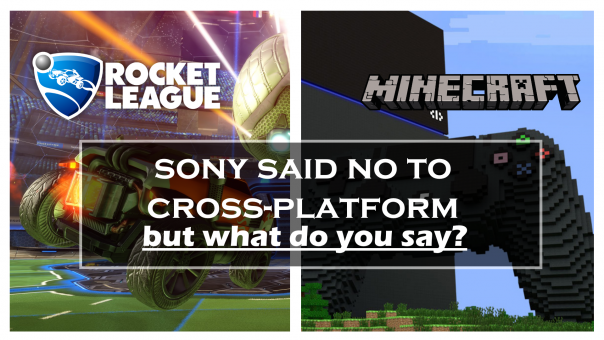 Apart from some exciting announcement on current in-development games and upcoming releases, it seems like this year’s E3 also triggered an interesting topic of discussion or rather, a debate. In their E3 briefing, Microsoft announced their popular game Minecraft will be cross-platform playable. Players on the Xbox One, Nintendo Switch, Mobile and VR will all be able to play together. Thereafter, Nintendo announced that Rocket League, developed by Psyonix will be coming to the Nintendo Switch. Psyonix later confirmed that the game will also be cross-platform between its Xbox One, Switch and Steam players.

So the question here is, “Why isn’t Sony’s PlayStation included?“.

The decision to exclude the PlayStation from the cross-platform playpen actually came from Sony alone, in fact Microsoft is openly encouraging Sony to give the go-ahead for cross-platform play, Minecraft’s spokeperson Aubrey Norris took the persuasion further on Twitter.

On the Rocket League side, Jeremy Dunham, VP of Publishing at Psyonix told Polygon that they could get the entire cross-platform system (PlayStation) included “Up and running in less than an hour all over the world”. However, when asked about the gravity that’s keeping this idea from launching, Jeremy said “The honest answer is PlayStation has not yet granted us permission”.

So WHY is Sony keeping their PlayStation players from the rest? Here is where it gets interesting.

In one of the questions asked by EuroGamer regarding “Upset PlayStation owners” who wants to play those two games with the rest of the world yet not knowing why they can’t, Jim Ryan, the Head of PlayStation Global Sales and Marketing replied.

“Jim Ryan: Yeah. We’ve got to be mindful of our responsibility to our install base. Minecraft – the demographic playing that, you know as well as I do, it’s all ages but it’s also very young. We have a contract with the people who go online with us, that we look after them and they are within the PlayStation curated universe. Exposing what in many cases are children to external influences we have no ability to manage or look after, it’s something we have to think about very carefully.”

So, apparently people are upset with Sony’s decision to stay away from cross-platform gaming at the moment. But what do YOU (PlayStation owners) actually want ? Did Sony really spoke your mind when they said NO? Or do you actually welcome the opportunity to connect with more people?