Stepping into the 10th anniversary milestone since the first inception of Mate series in 2012, HUAWEI Malaysia has officially announced the launch of its latest member in addition to the flagship Mate product line, HUAWEI Mate 50 Series, priced starting at RM 3,699 onwards. Available in three variants, HUAWEI Mate50, HUAWEI Mate50 Pro and HUAWEI Mate50 Pro Orange Vegan Leather, the flagship phones are the latest performance-driven smartphones which include breakthrough technology and innovations that are more powerful than ever.

The HUAWEI Mate 50 Series represents a major step forward in smartphone aesthetics, thanks to the symmetrical Space Ring Design and an intricate design. The Mate 50 Series phones pack an Ultra Aperture XMAGE Camera, which boasts the first-ever 10-scale adjustable physical aperture and most versatile photography capabilities ever seen on a Mate smartphone. Thanks to the rock-solid “Kunlun Glass”, it boosts the phone’s drop resistance by 10 times .

These robust features are further enhanced by the EMUI 13 operating system, which debuts on the Mate 50 Series and offers a broad array of seamless smart services. The SuperHub feature, for instance, facilitates effortless data and file transfer between apps and devices, breaking through long standing barriers that had separated different platforms from each other.

“Over the past decade, the Mate Series has consistently pushed the envelope to make ground-breaking innovations broadly accessible. Each new generation of Mate smartphones has brought together a whole host of state-of-the-art HUAWEI technologies. The HUAWEI Mate 50 Series continues this proud legacy, pioneering ongoing innovations and providing a breath of fresh air.”

In addition to the signature Mate Series design language of iconic symmetry and Space Ring Design, the HUAWEI Mate 50 Series also makes use of the elegant Clous de Paris step-patterned embossing design for the first time ever, showcasing a new kind of ordered beauty that’s crafted down to the last detail.

HUAWEI Mate 50 Series phones come with two different types of rear cover, glass and vegan leather. The glass cover is available in two colours, Silver and Black, which give the phone a distinct, elegant finish. The vegan leather version comes in Orange, inspired by radiant orange rays of the sun.

The HUAWEI “Kunlun Glass “consists of 10 quadrillion-level nanocrystals, the result of composite ion strengthening, which make it more resilient and drop resistant, as verified by the five-star glass drop resistance certification from Switzerland’s SGS. This makes Mate 50 Series models the first phones to ever achieve this certification. HUAWEI Mate 50 Series phones also support IP68-rated water resistance of up to 6 metres underwater , allowing them to easily handle wet and dusty environments. 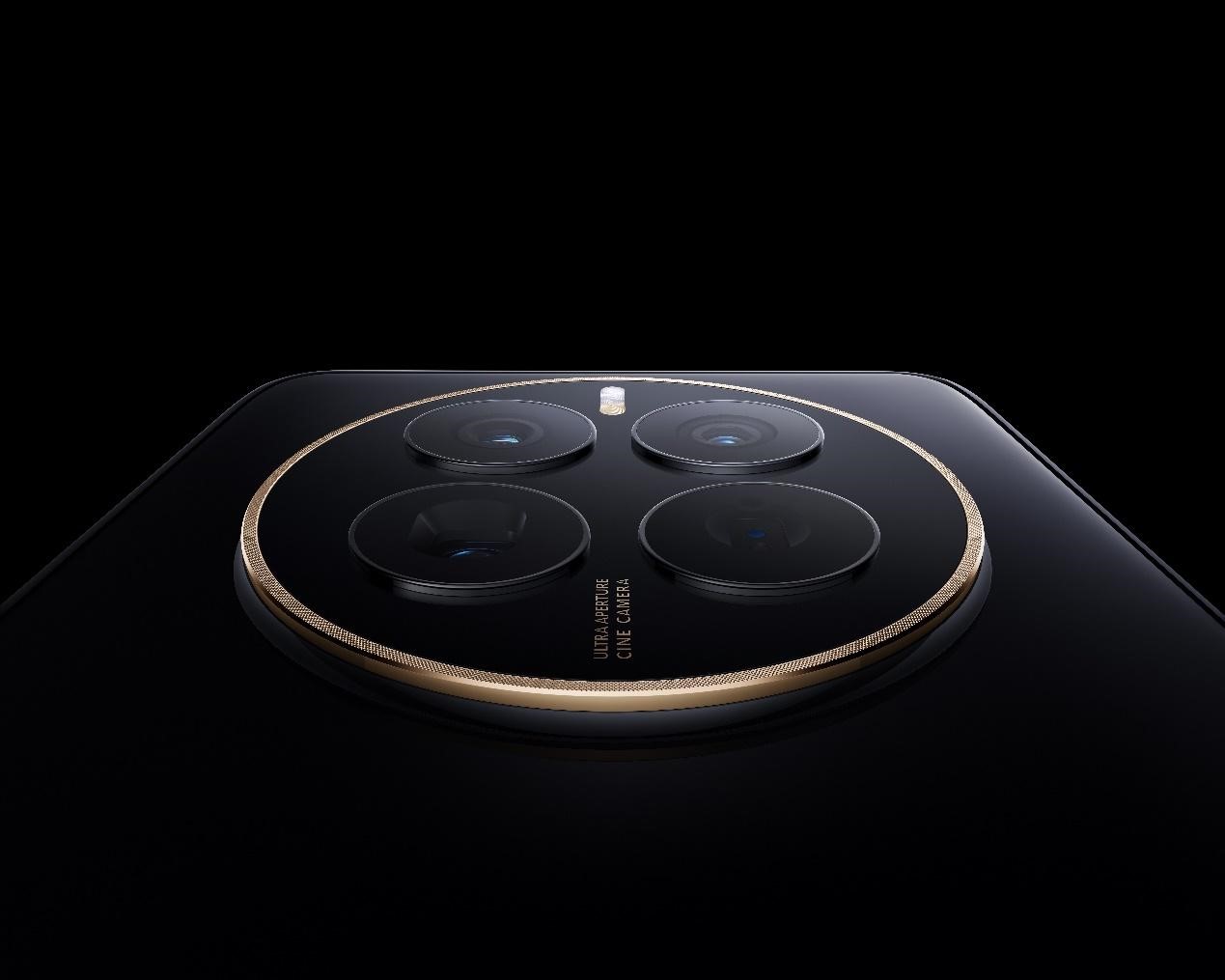 HUAWEI launched its very own mobile imaging brand “XMAGE” in July 2022, with the goal of offering consumers a new shooting paradigm that fuses science with culture, and aesthetics with technology in terms of imaging style and shooting experience.

The HUAWEI Mate 50 Series features a cutting-edge Ultra Aperture XMAGE Camera with a 10-size adjustable physical aperture, which incorporates key advances to the optical system, mechanical structure, imaging technology, and image processing. The smart aperture adjusts to match the aperture size with the scene and shooting scenario identified in Auto mode. Switching to Professional mode allows you to manually adjust the depth of field and degree of blur.

Advanced hardware and algorithms are deeply embedded to enhance static image shooting. The Ultra Aperture Camera comes equipped with an F1.4 large aperture, working with the XD Fusion Pro image engine and high light intake, to set the image brightness, light and shadow details, as well as cold and warm comparisons to perfection. Night mode captures photos with highly distinct bright and dark regions, even in dimly lit environments. Portrait mode applies natural background blurring to make the subject stand out from their surroundings. The periscope telephoto camera supports a zoom range of up to 200x, bringing scenes from the great beyond right in front of your eyes. 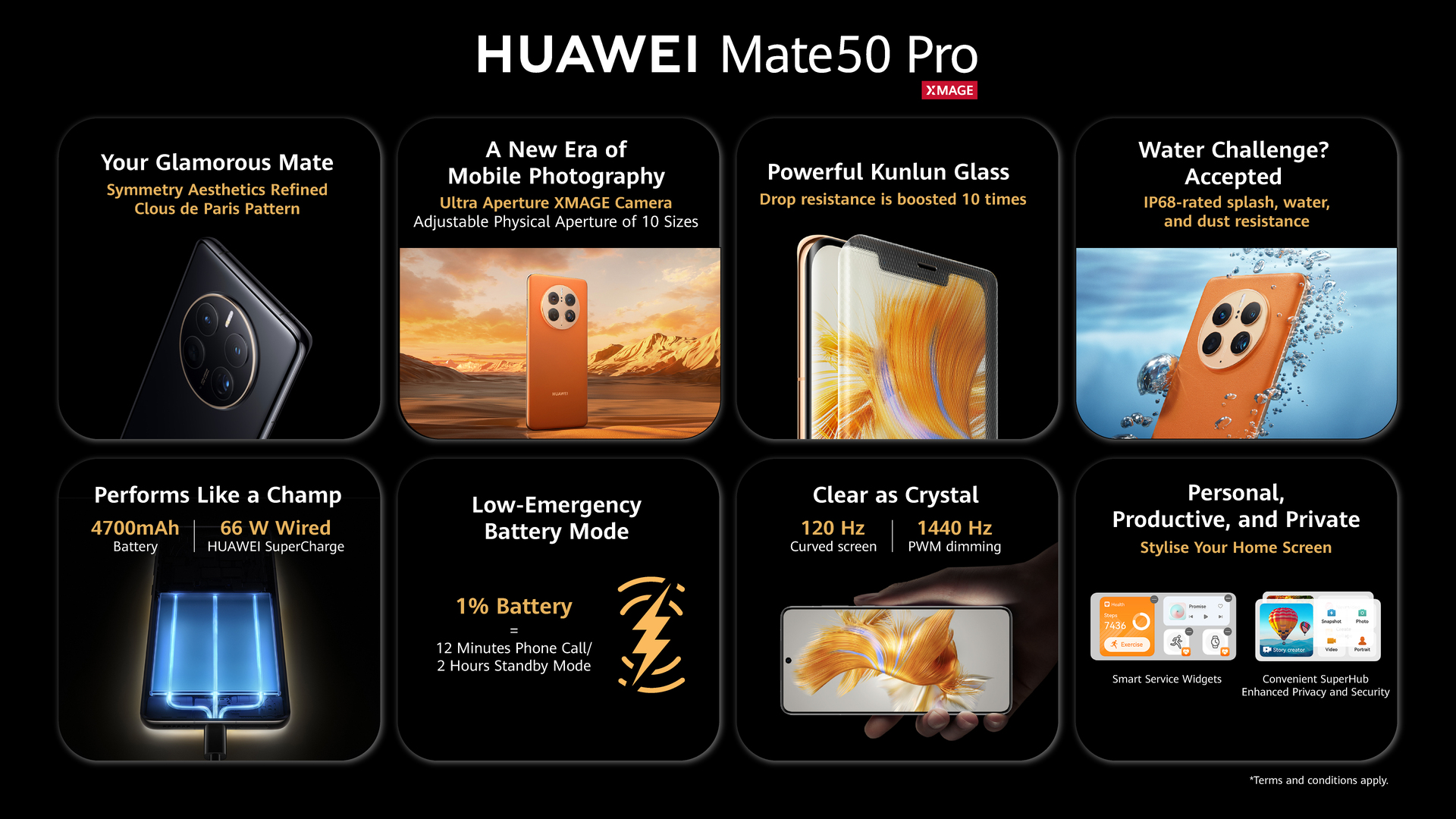 The HUAWEI Mate 50 Series is the first to run on EMUI 13, which streamlines daily interactions with effortless one-touch navigation.

SuperStorage removes duplicate files in an imperceptible way and compresses rarely-used apps. This preserves up to 20 GB space (on a phone with 256 GB of ROM) – leaving more room for the abundance of photos and videos that today’s users capture. SuperHub allows users to temporarily store images, documents and text, while sharing them in batches with free and easy transfers between apps and devices.

The HUAWEI Mate 50 Series packs cutting-edge technology that substantially boosts performance. An innovative Low-battery Emergency Mode will be activated once the battery level falls to 1%; whereby the SuperEnergy Boosting will enable HUAWEI Mate 50 series to extend standby time by three hours, or 12 minutes of call time .

Comprehensive privacy features allow ultimate peace of mind. The HUAWEI Mate 50 Series also supports Image Privacy Protection, which means that the phone will automatically erase sensitive information such as location and time whenever the users share images among others.

Innovation never ceases. The HUAWEI Mate 50 Series is a fitting tribute to a decade of Mate innovation, with its stunning design, powerful communications, imaging technology, and nimble smart interactions.

Getting the HUAWEI Mate50 Series is easy if you are a Maxis Postpaid subscriber as you can own it for as low as RM65/month on Zerolution with instalments up to 36 months. On top of the free gift, Maxis also offers free 3-month phone theft & damage protection worth up to RM129.

Unleash Your Creativity With Huawei MatePad Pro 11 And Huawei AppGallery