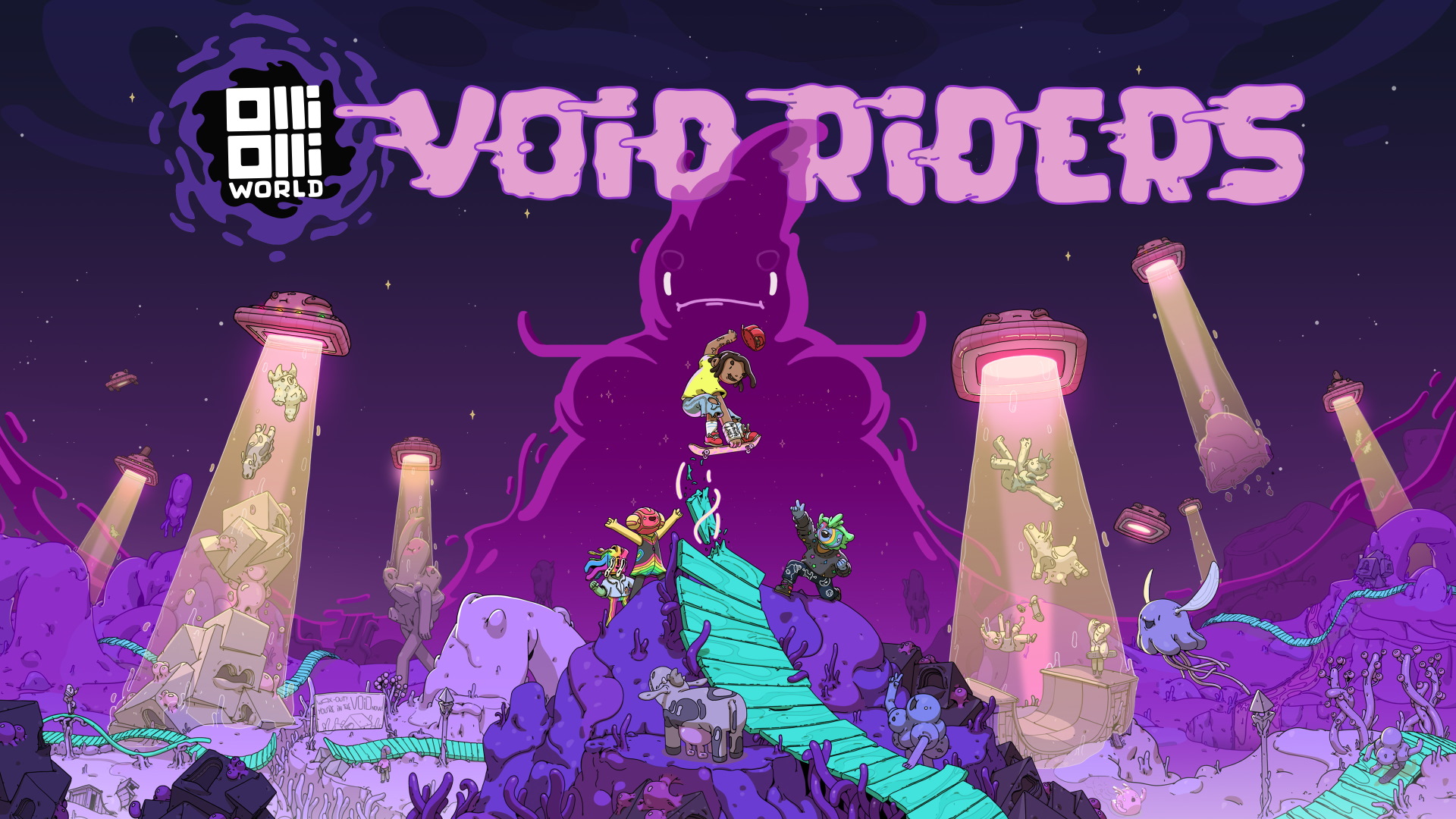 Four months after our initial reviewer game OlliOlli World gave it a high score of nine. Well, this must be great, I thought to myself. In all honesty, I haven’t actually tried the series out myself yet since I have had real-life experience learning skateboarding. Subsequently, I’m not a big fan of skateboards or perhaps it’s because of a cruddy huge board that I bought myself when I was a wee kid. As a result, I don’t really enjoy thinking about skateboarding as much because it reminded me of an enclosed space where I fell and tumbled a lot.

Years after to date, my life changed as having touched OlliOlli World: VOID Riders for the very first time. It filled my mind with an easing sense of euphoria surprising me with how vast, free, and easy the level playing field can be. Reacting to every obstacle mindlessly and at the same time mindfully threading through certain tricky paths beforehand. The experience reminds me of the sense of how I learned my first bicycle, rollerblading, and ice skating for the very first time. Everything just flows, clicks, and glides freely through the environment seamlessly, and that is in itself a reward. Like a feeling of a sparrow sharply gliding through the wind, that’s what makes OlliOlli really truly special. Don’t get me wrong, I do fall and stumble a lot into ragdoll continuously but none of that will actually stop me from retrying for the fun of it. Till the point that I played finished both the base game and the DLC contents within the timeframe of six to eight hours. So I ask myself, does OlliOlli World: VOID Riders actually give more to the base game? let’s find out.

While the base game plays out solidly like a brakeless Sonic on wheels, pushing the right directional buttons to grind the rails, skate the stairs, and jump through gaps with reflexes in a stylish manner. OlliOlli World: VOID Riders ramps up the volume of uniqueness and challenging aspects to the grind with over eighteen new levels to play with. The levels are placed separately as part of the base game maps, starting from Sunshine Valley and ending in Burntrock, with the alien invasion event taking place once the player completes Route 666. 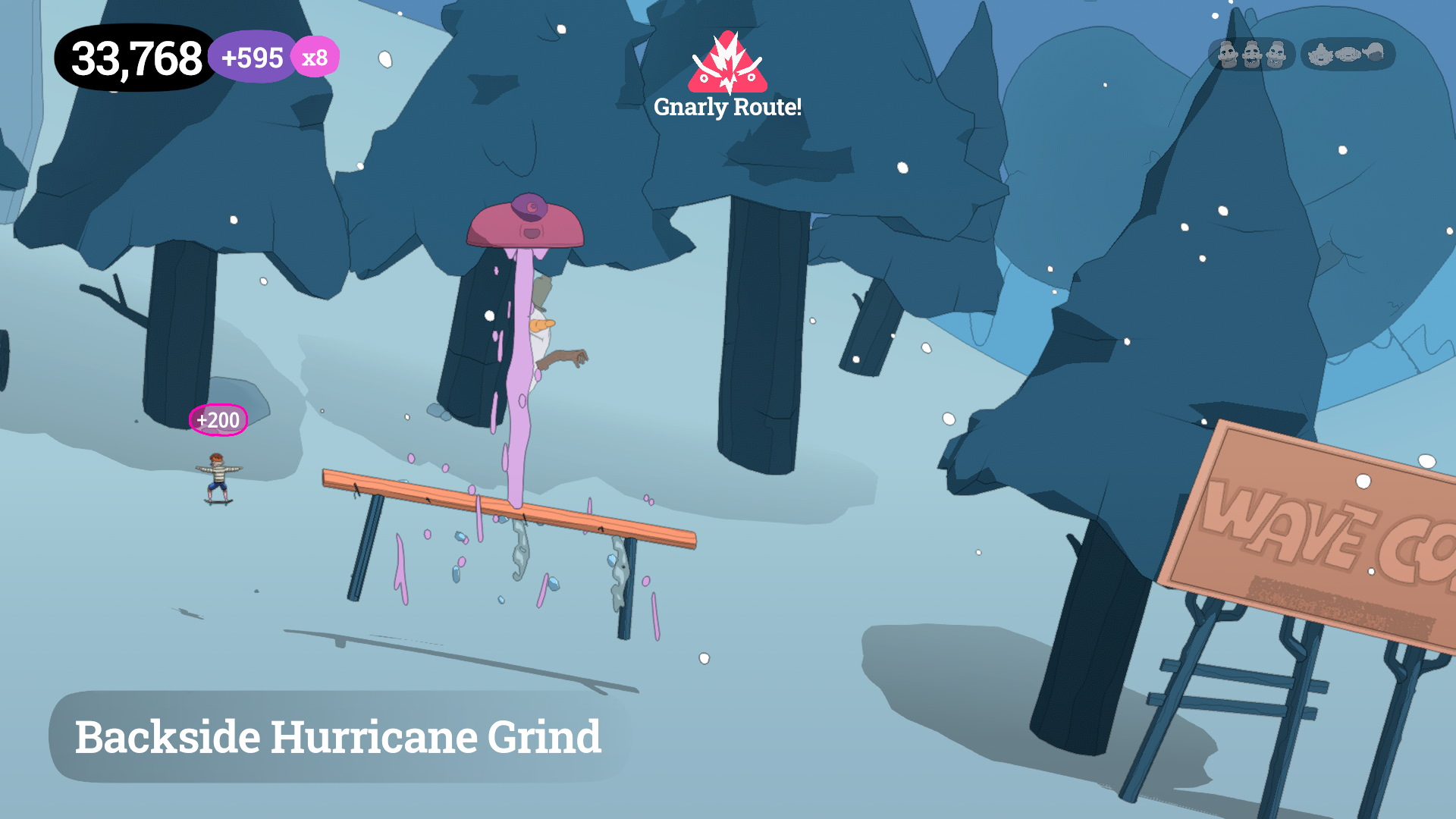 Level designs in OllieOlli World: VOID Riders are practically dark mode of the base game maps, and they are more designed to be dynamic. Since Alien UFO ships can be seen in the background pulling off rails and debris with their tractor beams on an upward trajectory. Despite being able to use that to my advantage and grab the tractor beams to give me a lift. The bad news is the new level of design gives me lesser time to react, even fewer rails, smaller sign boards, and even shorter ground time to compose myself. That also means larger gaps to jump over in a bigger air time via zoom-out camera fashion. The good news is that there are no staircases to be mindful of. 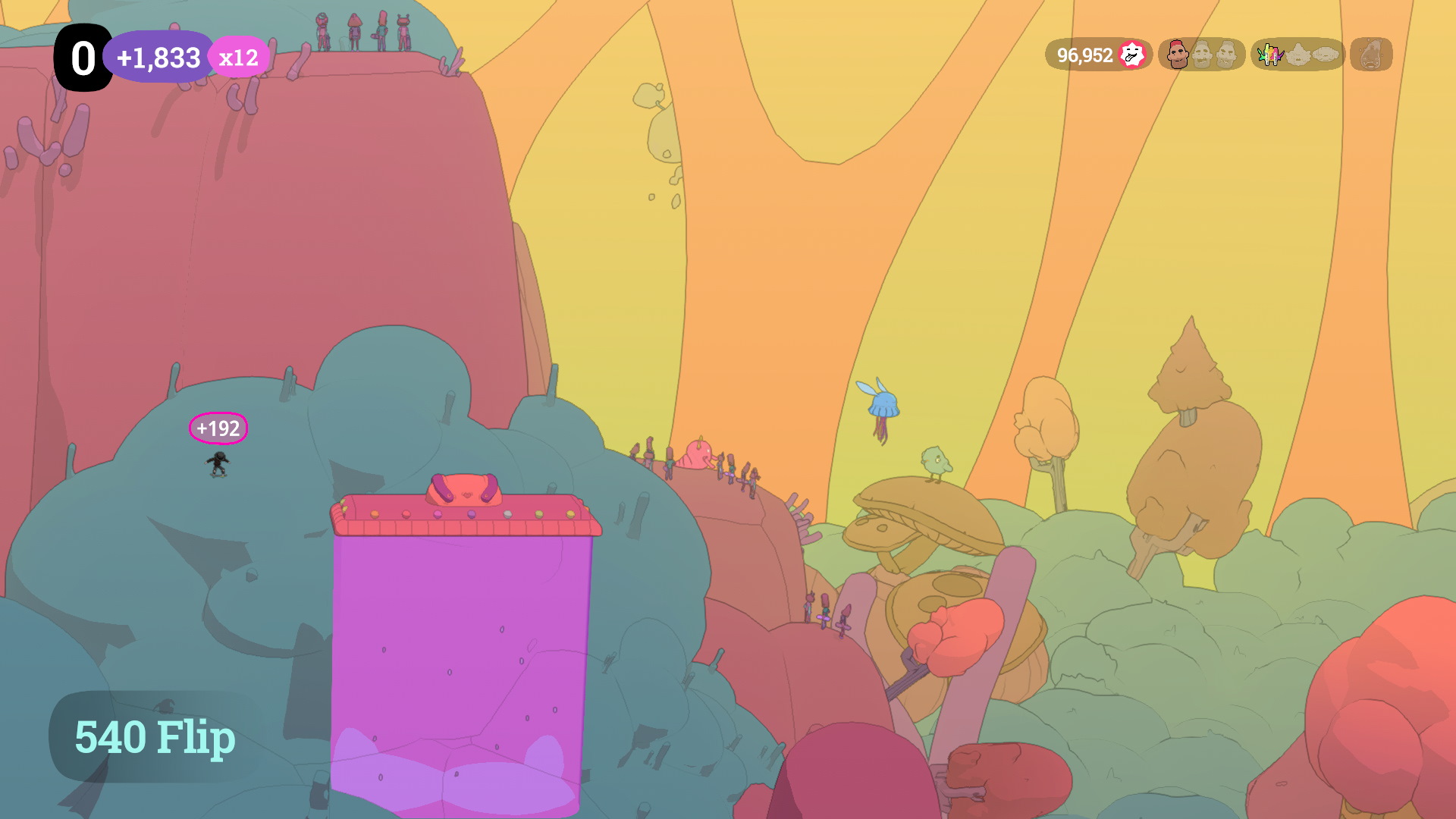 The gameplay will be straightforwardly quick and frantic in glides with some tighter execution timing and at the same time gaining the right momentum needed to land across safely.

Adding on to the cherry on top, some levels do not have Chiffon checkpoint to revive you, so be prepared to be frustrated before earning that long stretch of sweet success. Because of that, there are some noticeable issues of either lag input or just simply not pulling off the right moves needed even though I swear that I’m pushing the right buttons at that point in time.

Moreover, I initially did miss out on Nebulord’s last level since the void is inscribed semi-transparently on the bottom left side of the map, so it does not appear noticeably to me.

Artstyle – A KickFlip To A Right Direction

The three aliens’ that goes by the name of Sair’Rah, Khehvyn, and Pftangxi. All their designs are colorfully radical like biker teens wearing a boxy space-age Halloween costume. Their designs are pretty rad compared to the usual hippie residents in the game. My favorite is their boss called Nebulord looks as if Patrick from Spongebob Squarepants traveled from outer space in a purple goo-like skin. 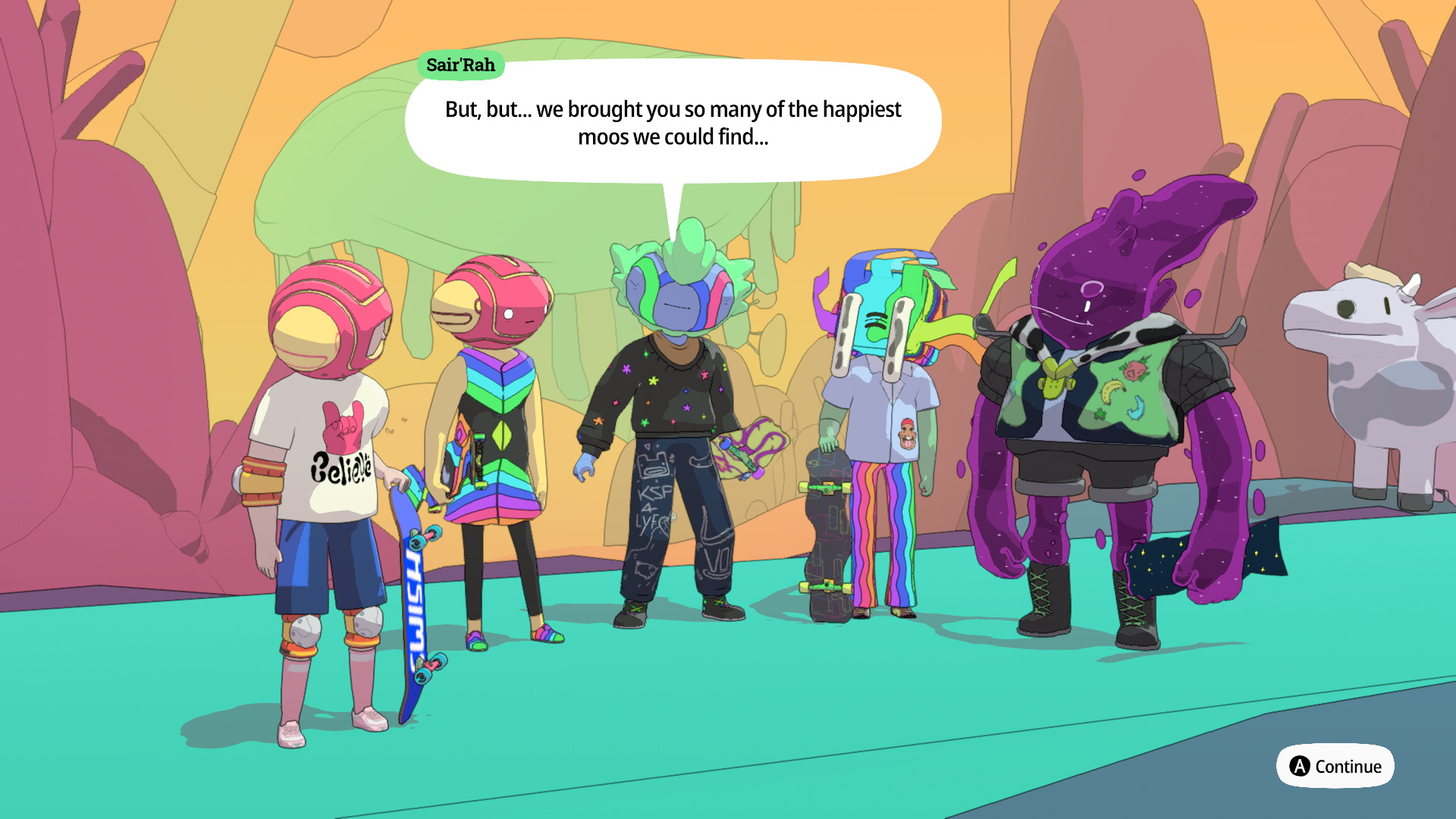 As I reached the last six levels of OllieOlli World: VOID Riders, my first impression was that it was like skating through a dried-up polluted ocean, surrounded by oversized corals, floating debris, and flying jellyfish with bird wings. Sounds odd but it is the game’s depiction of outer space after all. 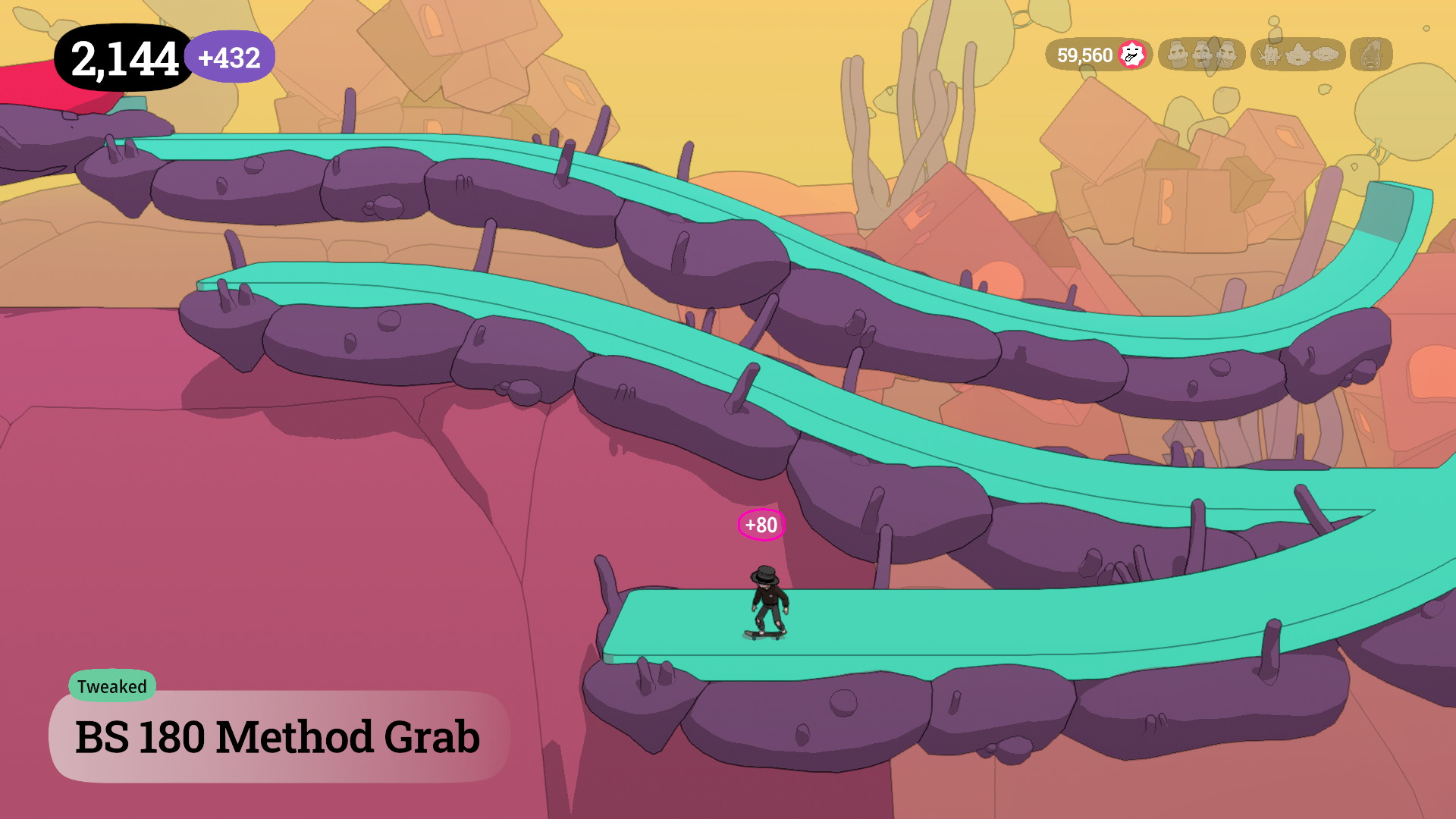 Though somewhat different yet at the same time, the level and character designs of OlliOlli World: VOID Riders still retain the pastel-like cartoony Adventure Time colors. Keeping it as pleasantly consistent throughout.

In contrast to the striking otherwordly designs, in terms of personality, unlike the local residents, the aliens lack the flavorful vibe to make them stand out even more. Perhaps that is intended as all three aliens seem to be focused on being soldier ants. All the aliens talk about constantly are things or someone they want to take, capture, or find for their Nebulord, which may or may not overstay their welcome.

Unlike the hippie residents who actually talk about the place, vibes, and stuff with their own flavorful gibberish grunts. The alien’s voice sounds more attune to a DJ scratching through the radio making sounds of a Clickity Clackity as they speak but not as flavorful as the local residents in the base game. In terms of music, to me there are no noticeable radio stations that represent alien vibes and music in my opinion.

No complaints there as the usual soundtracks are low-tempo yet electronically therapeutic. Adding on alien tunes or invading the radio may disrupt the flow needed to immerse me into the game which I imagine can be pretty risky. 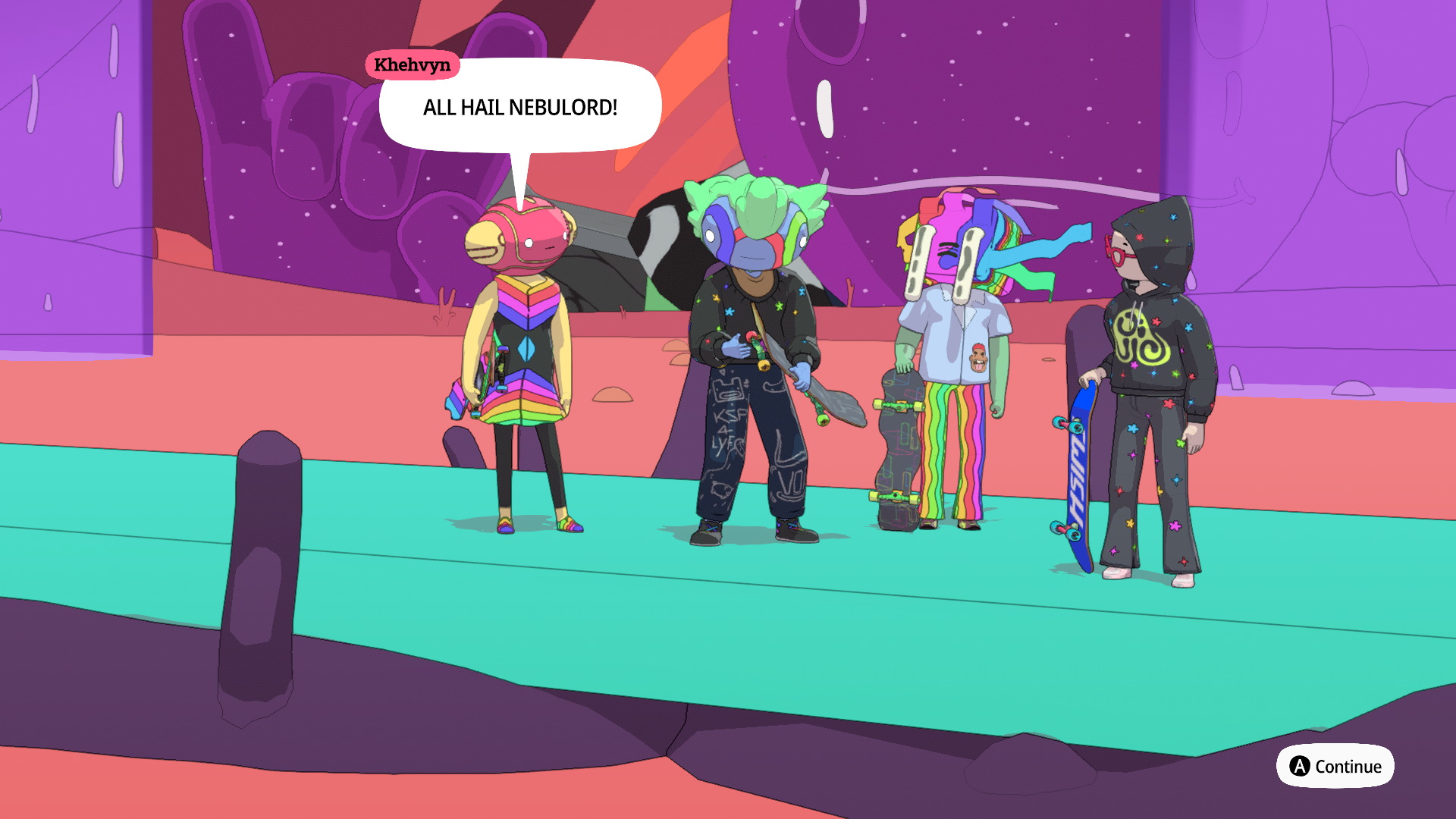 While I boast about the local residents in the base game talking flavorfully about stuff but they don’t actually do a lot of stuff in the background or on the field to show off their moves. They are more akin to social skateboarders who stand around and hang out by the side of the rink, holding their boards throughout. But in OlliOlli World: VOID Riders, most of the aliens, bosses, and Nebulord actually do something in the background – be it racing you and cheering you on in the background, which is a good thing. Though treated as separate levels, I do wish both the aliens and my local friends in Radlandia would actually interact with one another to spark any interesting memorable banter. 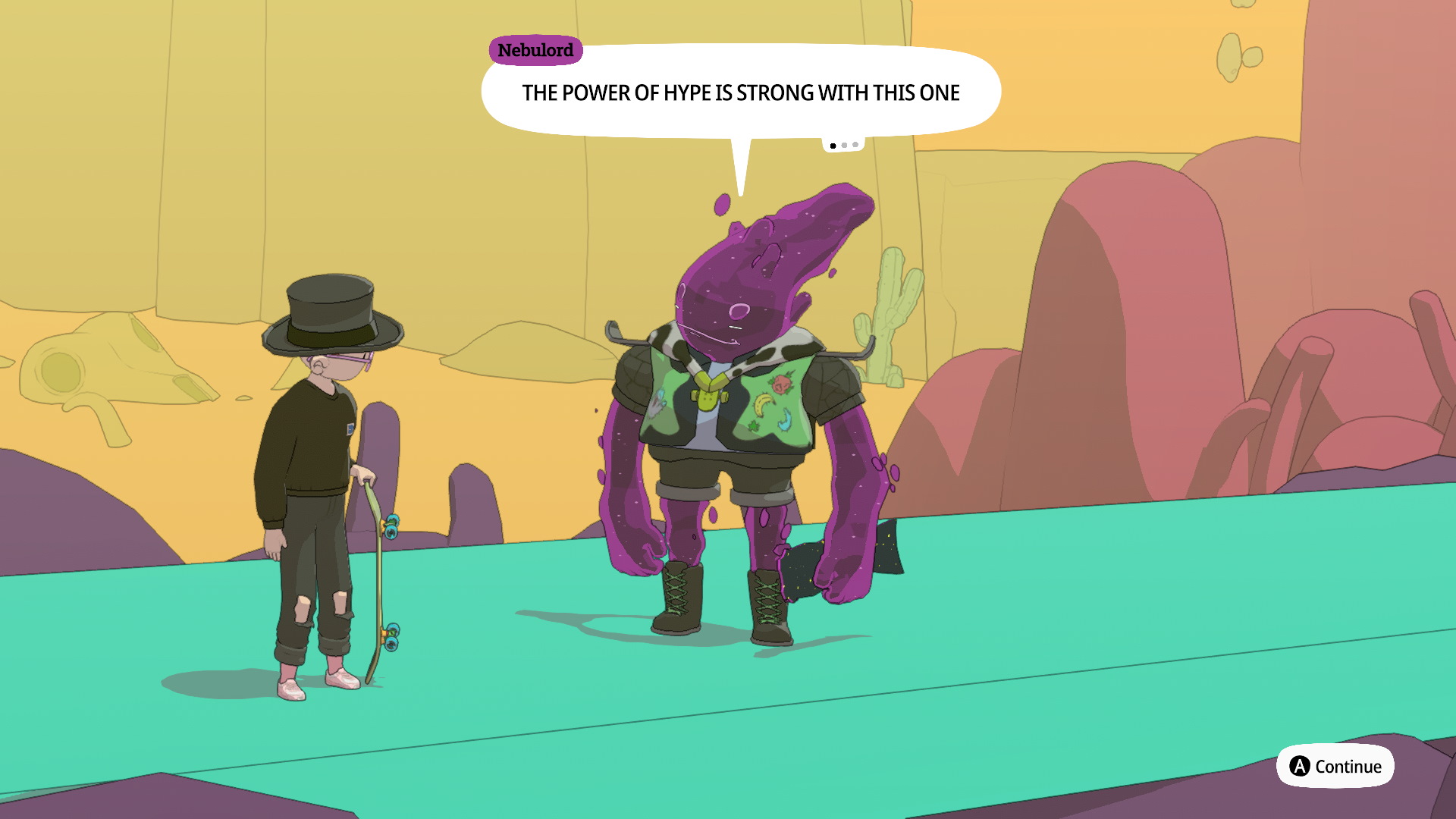 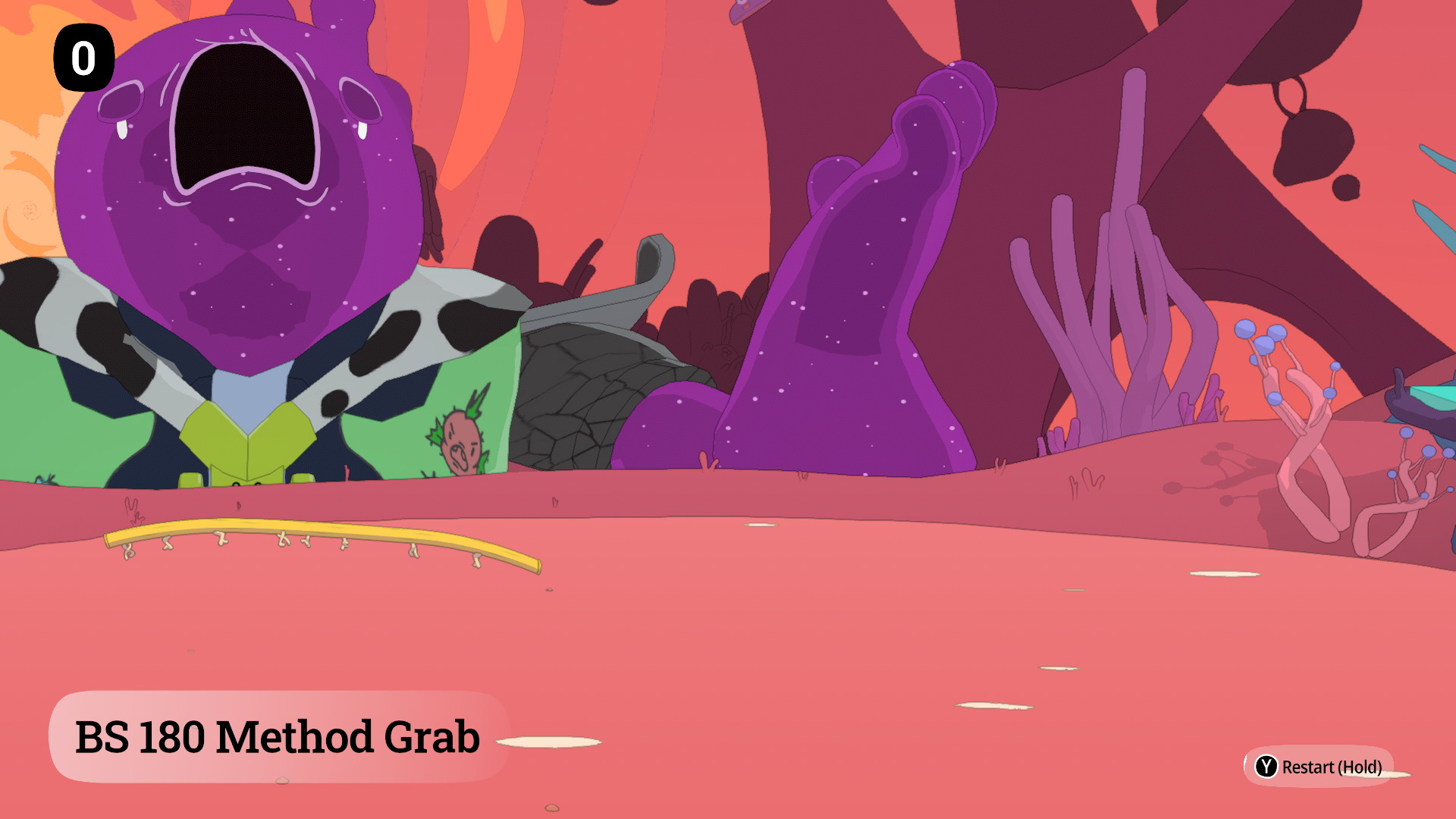 What I Wish Can Be Better

This Is the Real Deal

At first, I am not interested in doing the challenges and customizations but the overall gameplay developed my interest to gradually become involved in those areas as well, and I’m sure many others felt the same way. If you haven’t tried the OlliOlli World base game, do give it a whirl as I am highly recommending it. If you do end up loving it; get OlliOlli World: VOID Riders to add that extra layer of fun. To me, OlliOlli World is a mindless escape and timeless piece that could be played whenever wherever especially if I ever have no games to play with or in my spare time. For this, I will be tapping my board on the ground as the experience throughout is pretty rad and far out.