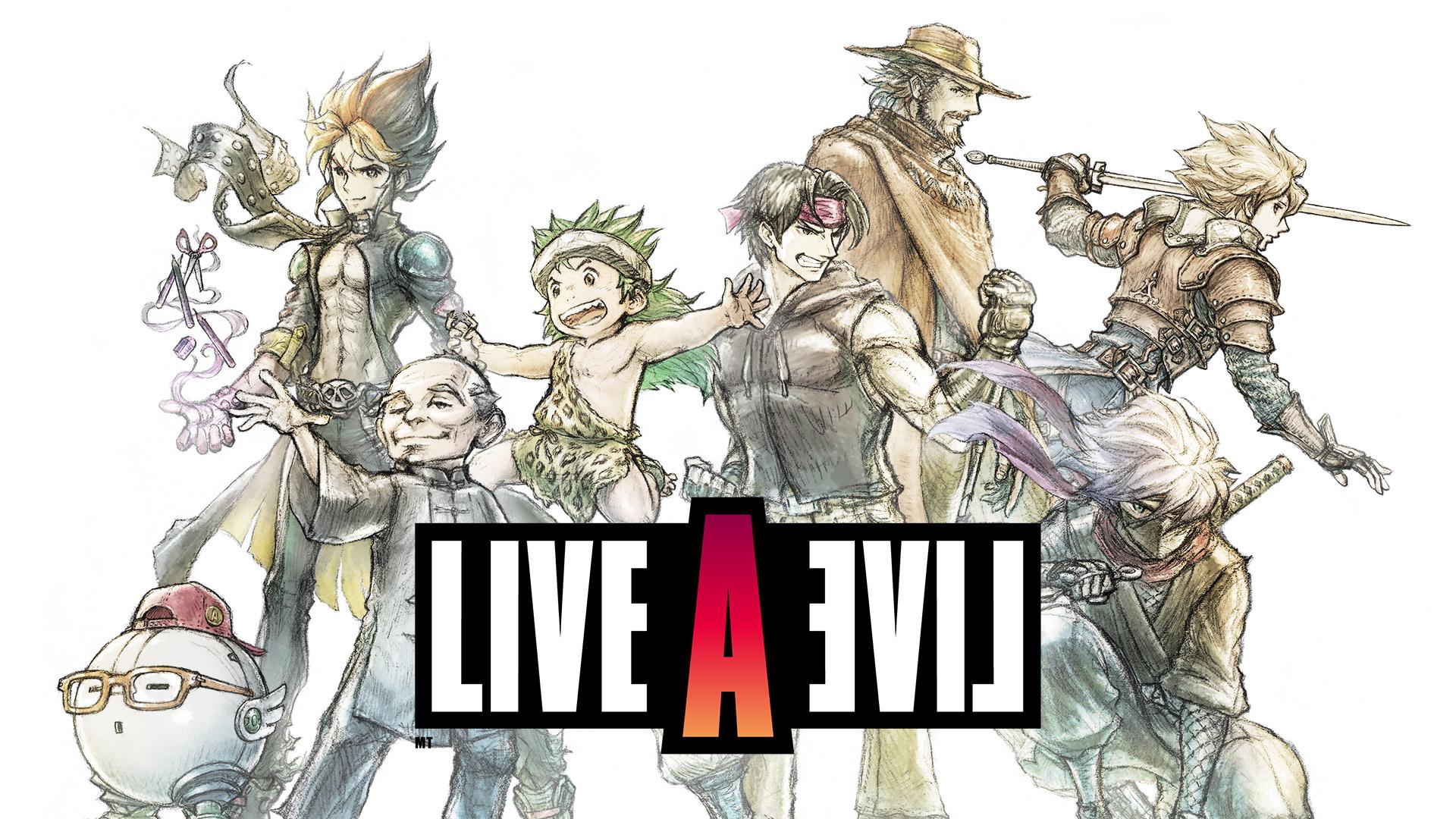 Having watched the first trailer for Live A Live for the first time, I looked it up on Google. I was greeted by song lyrics and means of being alive when I googled ‘Live A Life’, which made me chuckle at first because in some ways Mr. Google had just advised me to leave gaming behind and live a life. As I watched more of Live A Live, I was pretty excited, as I missed the touch of Saga Frontier series. It gives me the same vibe as an Octopath traveler and Chrono Trigger as well with its full pixelated atmosphere galore.

The thing I always find interesting is to find out if ever the characters from different backgrounds would eventually bump into each other at some point or are totally separated in different space and time – only to meet up with each other at the very end of the game. Furthermore, I wonder whether old classics can really keep things fresh and interesting over the long haul as even I couldn’t stand looking at the old FF 7 graphics after completing the remake.

Alas, after playing for some time, Live A live is a completely different form of RPG (perhaps even harder) which startled me at first that not only takes a different approach to leveling but also takes a semi-tactical approach to combat and progression across various characters from different walks of life. So here’s my review of ‘Live A Life’

Storytelling – As diverse as it gets

Storytelling in Live A Live comprises with seven different short stories for each character selected but some stories are shorter or more interesting than the rest of the crowd. The backgrounds, timelines, and ways of storytelling will vary, whether it is text-based with voice acting or full-on emoticons. As each of the character’s chapters tells a different story, by adapting typical Hollywood troupes such as Aliens, Back To The Future, or even your typical cowboy movie, so be prepared for cheesy dad jokes and cringe-worthy lines such as ‘Great Scott!’. But behind the brightly sprites are some of the darker tones of storytelling the game directors wanted to take such as civilian killing, sacrifice, and human experiments. Think of it like Tarantino behind the wheels where some things may turn ugly in split second. That being said, the last ninth chapter is one of the most extremely long windy opened-up dungeons, storytelling, and ending. In my opinion, there needs to be more side content spread out evenly across chapters with more side stories instead of merely throwing it all out in the last chapter. Since some short stories are far too short to allow some characters to have more development. Surprisingly as well, the last chapter is the strongest and at the same time the weakest chapter of all by bringing every character (Yay!) into the same timeline but without further explanation on how it was done (What?!) – be it time paradox, dark powers or just downright rejection depression. Unlike the Saga Frontier series where everyone eventually meets each other slowly, every character in Live A Live just pops out into thin air into the same timeline and is just as confused as I am. 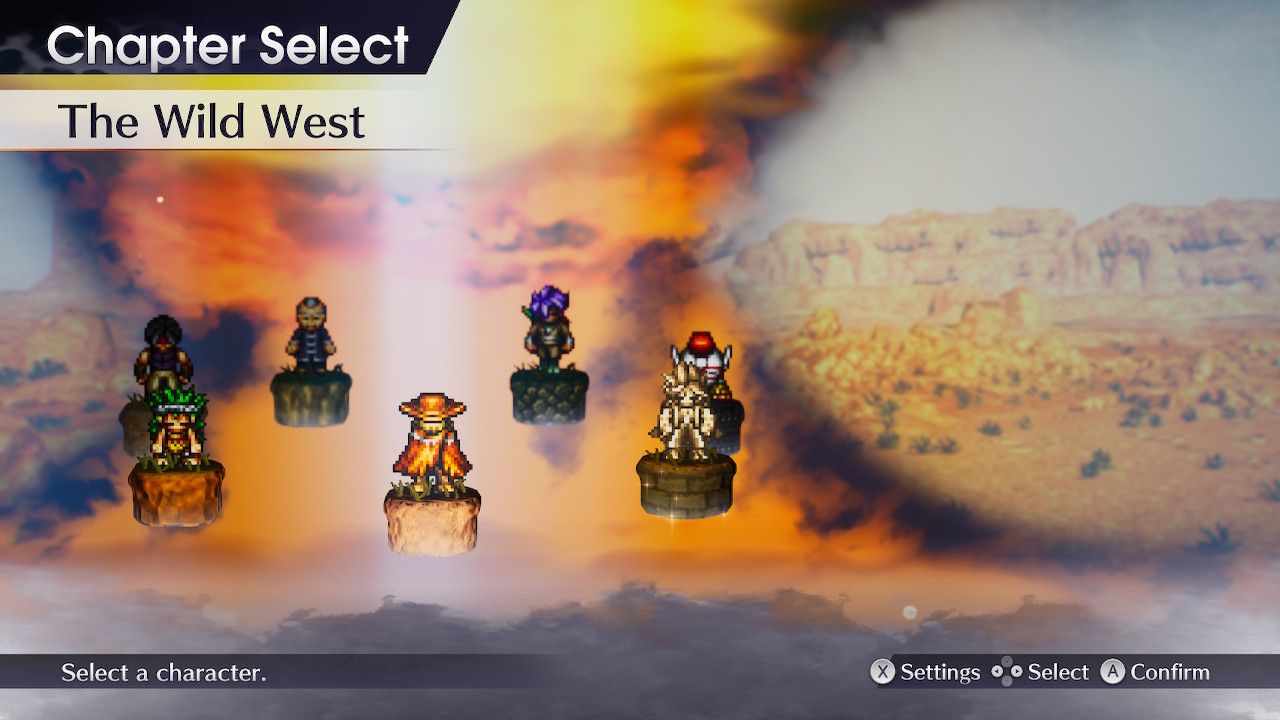 It’s also an interesting philosophical take to touch upon the fact that anyone, including the heroes themselves, can be turned evil too, like the logo itself where the inverted live turns to evil visually. That being said, the whole story is pretty hard to swallow since I’m not sure whether the hero was influenced by a dark force or decided to be evil by his/her own free will of choice – leaving it open for interpretation. As a result, I concluded that the storytelling, while touching on some aspects of good emotions and philosophy, felt short-lived and does not feel fully converge well together.

Gameplay – Could Be So Much More

The gameplay is seriously pretty innovative in terms of tactical combat with seven*six grid floors while some bosses type of opponents occupies more space than the rest. As any enemies have their charge meter filled up, they are able to move to a single unoccupied field. After my charges are filled up, each movement I make on the other hand is cheatingly infinite that will fill up my enemies’ charges at the same time. Which in turn will give them the opportunity to act even before I take an action. Therefore, reading everyone’s charge meter while moving in combat is essential. Hitting enemies with attacks or skills on an enemy will charge up their meter drastically as well and depending on the distance sometimes trigger their counterattacks. In a way, this could drag on combat if I am bombarded by tons of enemies around the board, each with their own counterattack and attack animations. Like the options in cinematic, I do wish there is a button to skip or fast forward attack animations. Aside from that, some attacks do break the charge meters of others, which was not obviously explained well, and integrated fully as part of the gameplay experience. So in a way, where you stand matters if certain enemy attacks are able to reach you or not after their meter charges or react via counterattacks. Therefore I was adept at moving away from the enemies before their charge fills up so they ended up missing their attack early on. And then preemptively moving in for an attack on them after or from afar. The gameplay of Live A Live is something I’ve been looking for in terms of mixed action with a semi-tactical approach with certain attacks hitting hard if enemies are vulnerable or resistant, which becomes clear by placing the attacks cursor on them with a pop-up at the top of their head.

One of the most interesting approaches is there is no MP/AP system in place so everyone can lash out their magic/special/super attacks anytime and anywhere they want. Just bear in mind the steps as some attacks from anyone do cause status changes to the grids that you are standing on that deal damage over time. In spite of all this, the tactical aspects of combat are seriously lacking since other than the fact that the special attacks can be spammed, the moves can’t be used to swap/change locations with allies or enemies in the fields for extra challenge or fun. As I recall moving back and forth, steering clear of bosses or enemy attacks and spamming special attacks to wear them thin; eventually turning all flashy moves into cheap spamming dry cosmic relief. Additionally, the last chapter’s boss fight is the most exciting against the new boss but also the draggiest fight I ever played where I am forced to refight every past chapter’s boss fight again without any new twist or even leveled up bosses to the gameplay. 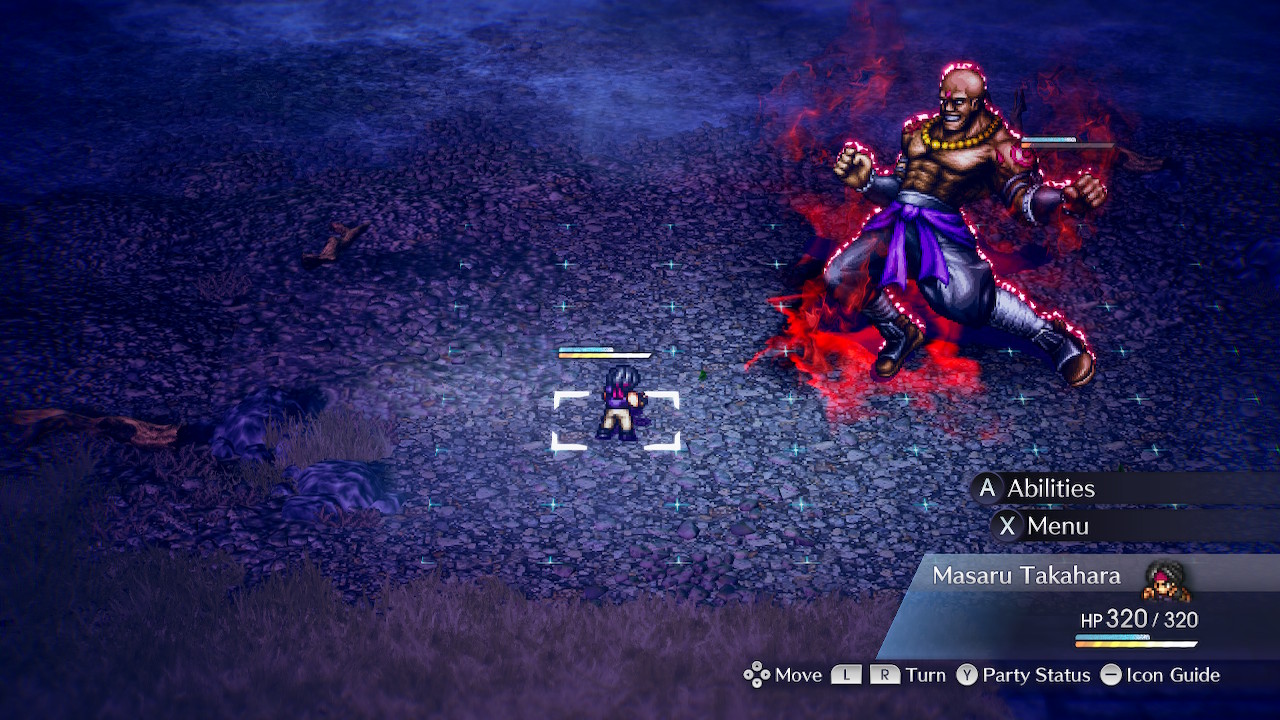 Speaking of leveling up, not all characters level up the same way via combat, as some rely on items gathered from exploration or learning the skills of enemies. Even more so, some characters have their RPG elements cut short with little to no combat, merchants, nor items to pick up at all. Overall it gives a rather unique experience from what normal RPG players are fully accustomed to. In addition, you can also explore differently depending on which character you choose, as some have the capacity to read minds, sniff out secrets, and hide and hunt, but not all of them are as fun and creative. But they do share that awful radar design in the game, that points to a location needed to reach without indicating the walls, gaps, or path, which can be detrimental if the level design of that said chapter is much more complex. 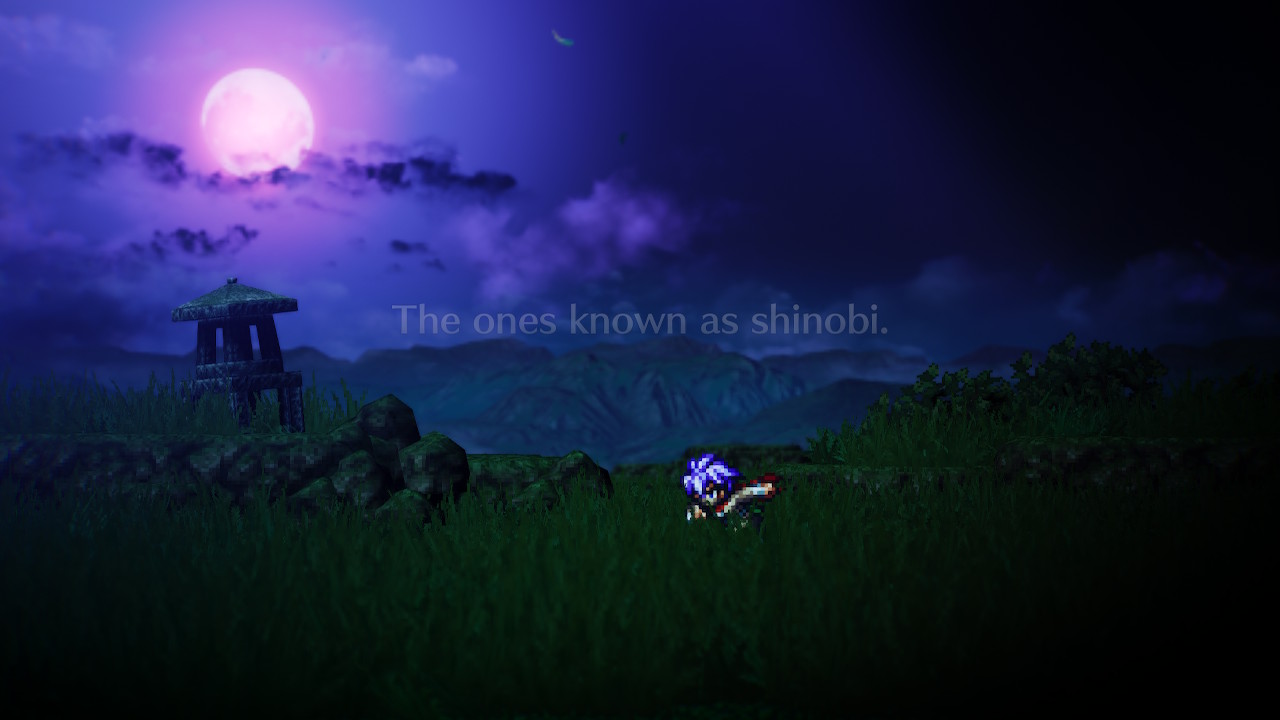 Animation, Music, and Voice Acting- Smooth on the edges

If I were to recommend ‘how to’ remake a classic, Live A Life is a primary example of how to make old stuff new again with smoothening out pixelated edges, full-on flashy attack animations, and added Octopath Traveller atmospheric lighting. While the character’s pixelated animation actions and reactions are somewhat limited, overall it covers enough grounds of expressions needed for specific scenes. Certainly, the animation alone exudes enough charm like Chrono Trigger or Grandia to make whole characters genuinely comical, wacky, or even pure evil enough to carry the whole series. Adding on the plus point is that cinematic scenes do come with accessibility features such as skip buttons and autoplay options. 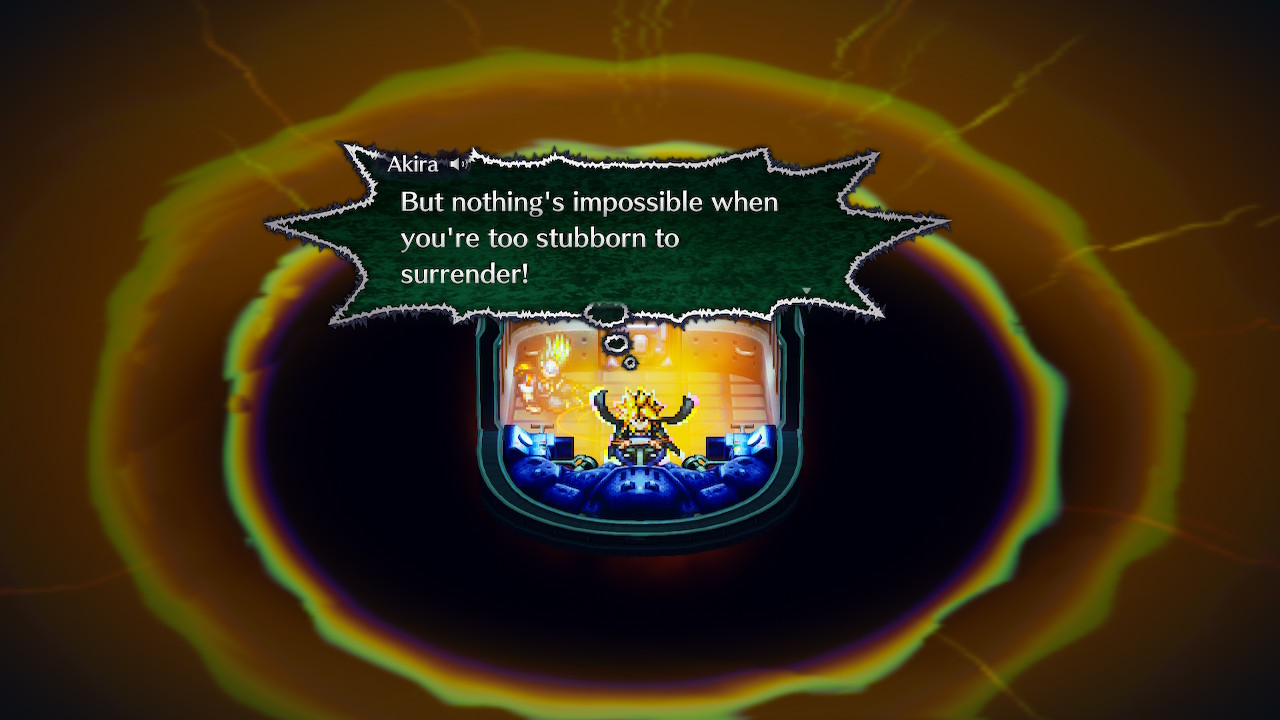 Like the animations, the music as well does not falter and is decently played with a modern twist to the old retro synth-wave music. As far as what I would feel described as multifaceted undertone lively soundtracks spanning across different eras with some heart-pumping tunes, rowdy jazz, adventurously flamboyant, tribal, pretty catchy, and eastern touches that suit not only the time period but also the tone delivery of storytelling. Even more so the full voice acting of most characters matches with the tone needed to express the right time period and places as well – while there are still some odd bits of British accents thrown in sometimes; overall the voice works are pretty solid too. 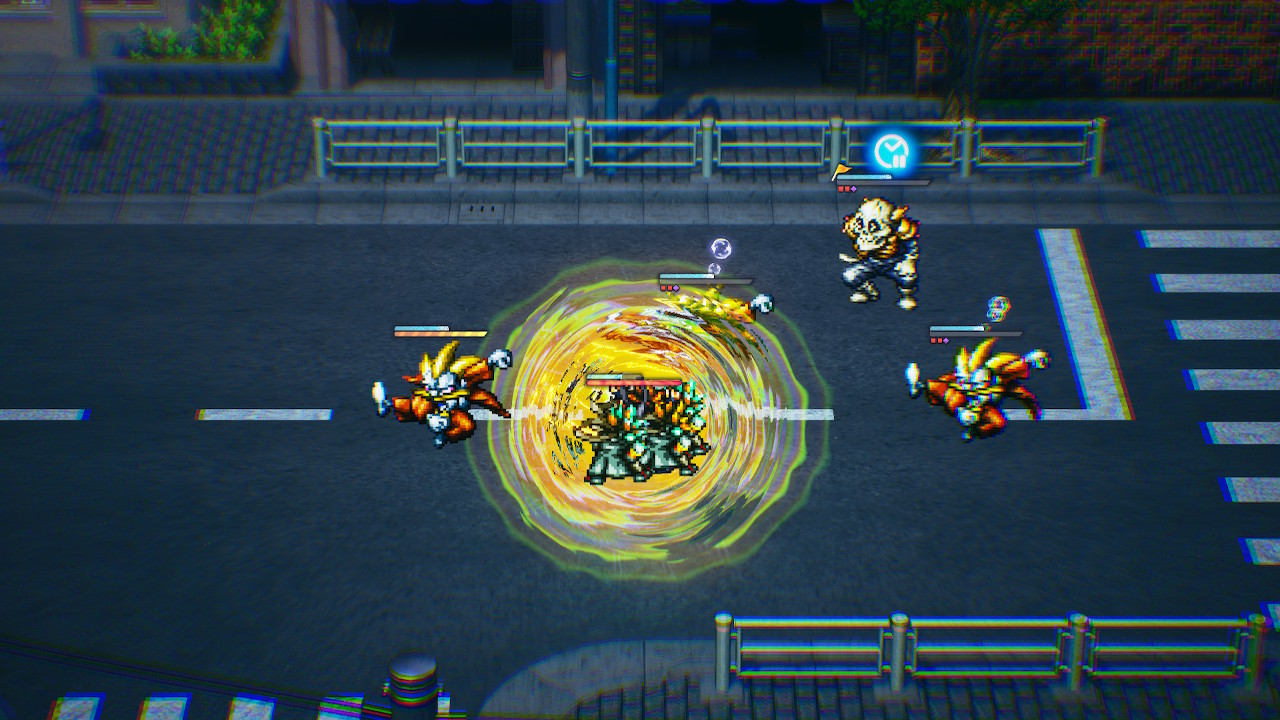 What I Liked About LIVE A LIVE A Gem, Yet Lacks Sharpening

Overall my time with Live A Live is well spent in storytelling, music, and combat. While that being said, there are certainly a few key areas of improvement and tweaks that could elevate my playing experience even more as mentioned above. Yet at its core, to me, Live A Life is pretty well worth a try for any JRPG enthusiast out there wanting to have a uniquely different experience and it doesn’t feel dated. In its own way, Live A Live portrays a mix of cultural charm, from tribal, medieval, and robotics all the way to cowboys, just lacking a few more such as pirates, Vikings, and a pilot to round it all up.

Nonetheless, if I were to wish for more remakes of nostalgic classics like Chrono Trigger, Lunar: Silver Star Story, Grandia, and even Suikoden, I would hope more developers take notes and follow with Live A Live’s suit in tone and delivery, making it anew, even more, a worthwhile memorable experience.