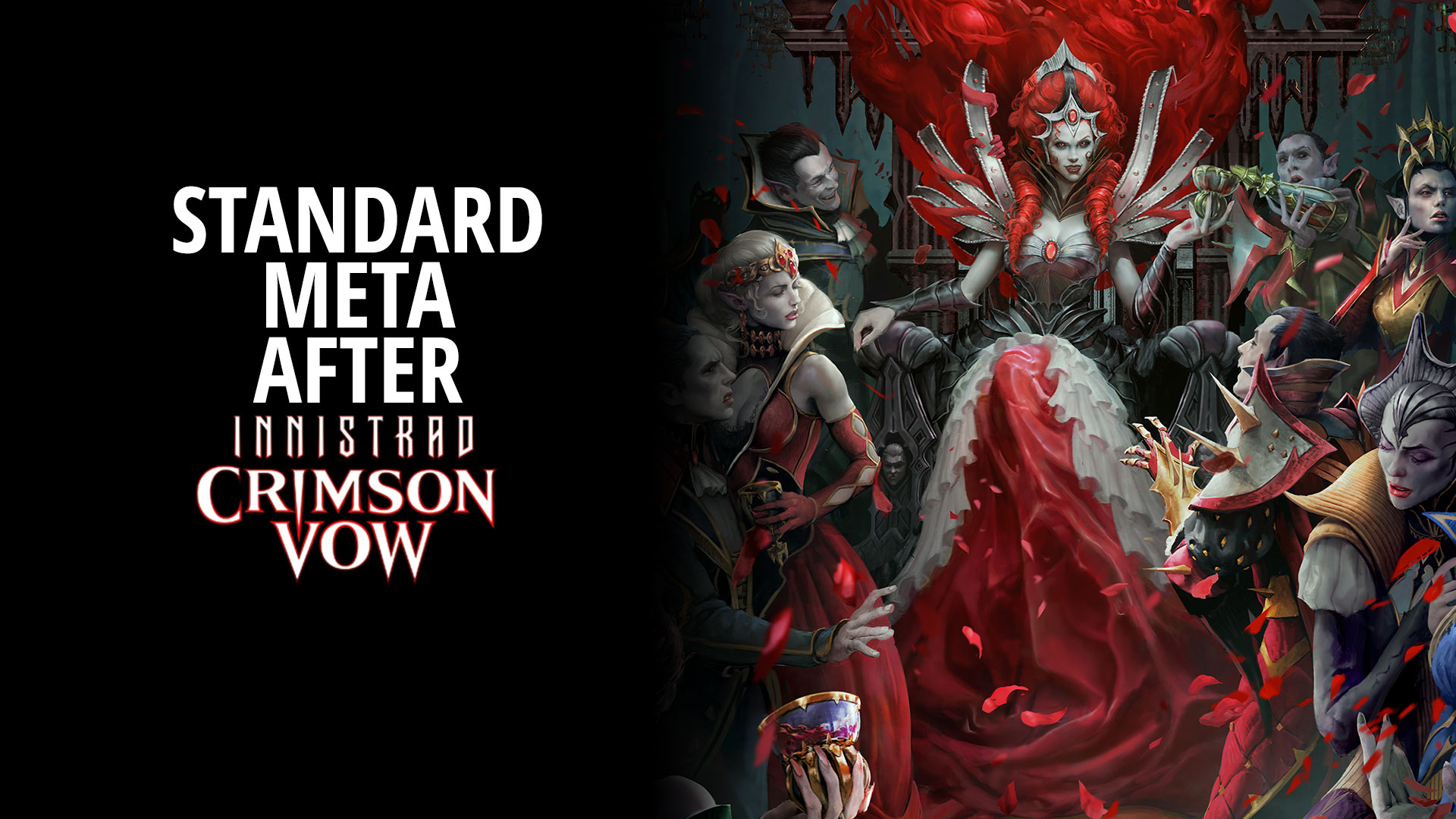 Officially launched on the 19th of November, Crimson Vow has brought some major changes to the meta for both the Modern and Standard format, even more so in the BO1 Standard format in MTG Arena. While most sets take a while to make an impression in the format, but this is not the case with Crimson Vow. The standard format was quick to adapt the new spells in Crimson Vow, and this is likely due to its synergy with the previous set – Midnight Hunt.

As of today, there’s a balanced spread when it comes to standard. Experimental builds aside, the most seen decks in the current meta are Mono-Black Control, Mono-White Aggro, Mono-Green Aggro, Izzet Turns/Dragon Combination, Orzhov Control and Grixis Control. Dimir Control used to have a bigger presence in the standard meta but losing popularity as of late due to the growth of other Control decks. 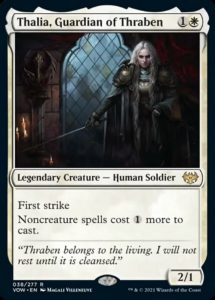 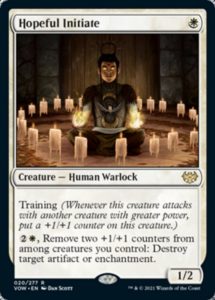 The first standard deck to establish its dominance after the launch of Crimson Vow was none other than Mono-White Aggro. It was a no brainer after the reprint of Thalia, Guardian of Thraben was revealed. While Thalia may not be a game-breaker by itself, Mono-White Aggro was already present at that point in time. With Brutal Cathar and Adeline, Resplendent Cathar leading the charge for Mono White, the addition of Thalia gave it the extra turn needed to survive against mass removals. 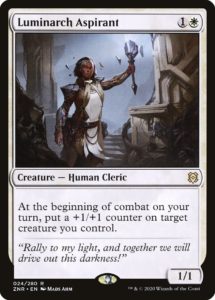 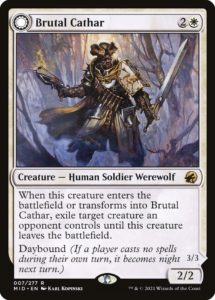 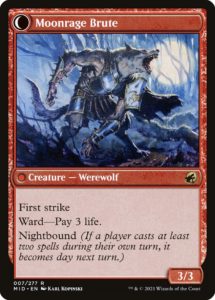 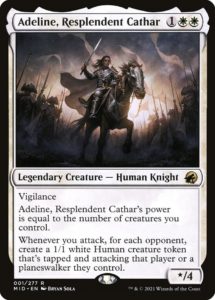 The most recent addition to the deck is Hopeful Initiate. Pairing it with Luminarch Aspirant provides it with the much-needed Counters to pull off the removal ability. While it may not be an all-rounder removal on a stick, its presence helps to manage pesky artifacts such as Esika’s Chariot and Ranger Class. 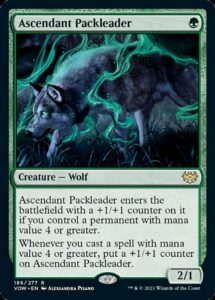 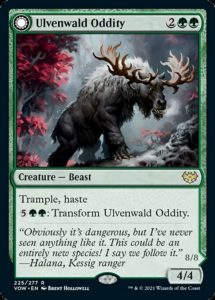 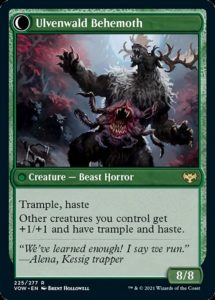 Like Mono-White Aggro, Crimson Vow’s presence in Mono-Green Aggro provided the deck with two staple upgrades. While it has managed to establish itself from the previous sets, Midnight Hunt did not play a major role in upgrading the deck at all. Fans and pilots of this deck were somewhat unsatisfied with the options available, and we’re considering moving on Gruul Aggro instead.

The first spell to make the cut was Ascendant Packleader. There’s only one word that can be used to describe 2/1 body with the ability to power up with easy to meet conditions – awesome! While most Mono-Green Aggros do not carry many 4 CMC spells to trigger its passive ability, it’s still a great body as a 1 CMC drop that powers up as you go.

Ulvenwald Oddity was the second card to be added into Mono-Green Aggro. On top being one of the spells to trigger Ascendent Packleader’s ability, Ulvenwald Oddity by itself is a crazy threat to table. Its vanilla version is not your everyday 4CMC 4/4 creature with 1 ability. It comes with both Trample, Haste and its able to transform if the opponent lets it live long enough. Once transformed, it can be safely categorized as a disaster class creature, an 8/8 Trample Haste that buffs its allies with additional +1/+1 counters and Trample – and Haste. 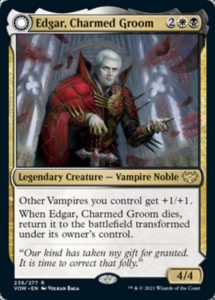 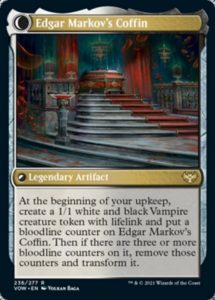 Orzhov Control is one of the commonly found standard decks that come in various combinations. There are only two cards in Crimson Vow that makes a shared appearance in most decklist and they are Edgar, Charmed Groom and Wedding Announcement.

Edgar, Charmed Groom is one of those pesky board presences which requires specific removals. In its vanilla form, the opponent will require an exile spell to remove it successfully. And it gets worse when the 2nd copy of it is cast. Due to the legend rule, when a second copy is played, the first copy dies and returns as its transformed version, while the 2nd copy remains in play. With both versions in play, the Legendary Artifact churns out a brand new 2/2 lifelink vampire on every upkeep – which is the perfect board setup for every control deck. 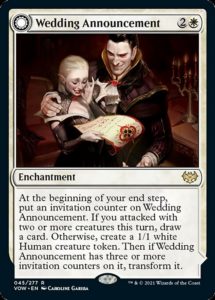 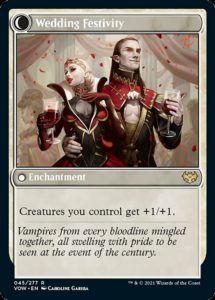 Ironically, and thematically, Wedding Announcement is the 2nd most played card in Orzhov Control. While most Orzhov Controls can handle aggro decks, it still requires a bit of effort to handle control matchups as this deck relies on tokens as win conditions. Hence the inclusion of the Wedding Announcement. In its untransformed state, it’s just a 1/1 token churner for the cost of 3 CMC. The main usage of this enchantment is the transformed version of it – Wedding Festivity. With Edgar, Charmed Groom and Lolth, Spider Queen providing most of the tokens, Wedding Festivity give it the necessary power up to end games faster. 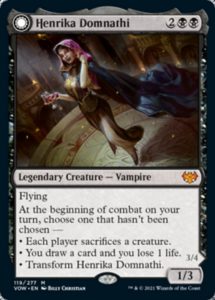 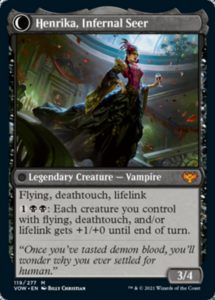 Some versions of this deck play Henrik Domnathi, a single-use creature remover and draw engine which flies. While the abilities are handy, but it serves more purpose in its transformed version – Henrika, Infernal Seer. The Infernal Seer version is a decent creature with Flying Deathtouch Lifelink which is able to power up all creatures which share the same abilities. 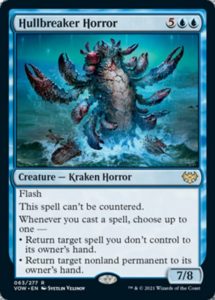 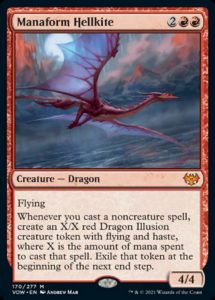 Izzet Turns is your typical cookie-cutter control deck with a splash of winged serpent while Grixis Control is the less scaly version of it with a splash of black in the sideboard. Probably the most hated deck in standard as well due to their templated gameplay. Crimson Vow barely made its presence in this deck as this deck has already reached its maturity in design. The only two cards which have an occasional appearance in Izzet Turns are Manaform Hellkite and Hullbreaker Horror. And both cards are at most played with 1 copy in the deck – and sideboarded most of the time.

Hullbreaker Horror by itself is actually a very good card to be included in most control decks, but it just doesn’t synergize well with Izzet Turns. The casting cost for Hullbreaker Horror is too high for this deck. One may argue that Goldspan Dragon will provide the necessary fuel for Hullbreaker, but if the game has evolved to that point – Hullbreaker Horror’s presence may not be necessary anymore. While it may not have a strong presence in Izzet Turns, it’s one of the staples in the Grixis Control version. This is because Grixis Control is designed to carry more non-creature spells and focuses on Lier, Disciple of the Drowned to provide flashback. With more Lier in play, Hullbreaker Horror’s presence provides more interaction. 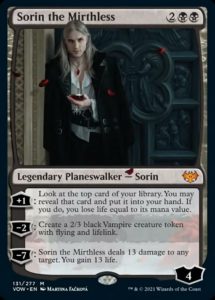 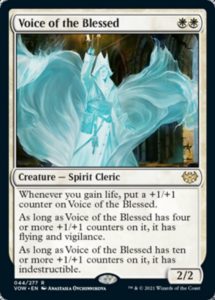 Although Sorin the Mirthless have yet to fit into the meta now, it has made its presence in some versions of Orzhov Aggro and Rakdos Vampire Decks. Sorin by itself is not bad as a planeswalker – the second ability protects itself while the first ability provides you with the necessary card draw advantage. With a proper setup, Sorin’s third ability can be used for lethal, or as a last-minute life gain if required.

Crimson Vow by itself is insufficient to cause a paradigm shift in the current meta. While some of the spells have made their way into commonly played decks, the power level of these cards has very little impact. The current meta is still overpowered by the previous sets. Staples from Zendikar Rising, Kaldheim, Strixhaven and Dungeons & Dragons have secured their position, and they’re here to stay until September 2022. Crimson Vow will probably get their chance to shine by then. But one question remains, will Kamigawa: Neon Dynasty overpowers the rest and change the meta when it arrives next February?

Reinvent The Past And Retake The Future In The Brothers’ War

Fight For The Fate Of The Multiverse In Dominaria United

Twice The Power And Fun With Double Masters 2022!