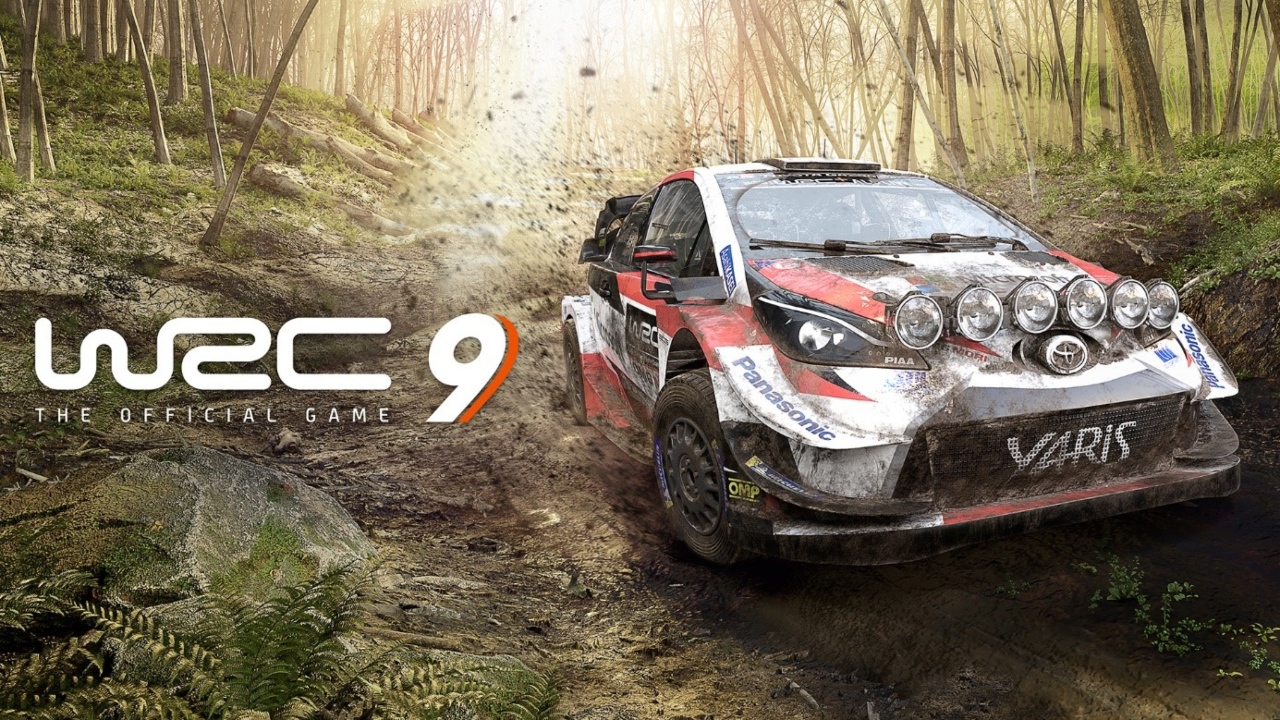 WRC 9 is an officially licensed FIA World Rally Championship game, just as F1 2020 is for the world of Formula 1 racing. Featuring 13 Rally events, each with 8 Special Stages, and this year includes new events held in Kenya, New Zealand, and Japan. Fun fact, Japan is 100% asphalt with lots of hairpin turns, and Kenya has one of the longest stretches where u can pedal to the metal and hit your car’s top speed – long story short, it’s fun! For the uninitiated, Rally races are mainly point-to-point time trial events, where the fastest car with the shortest total time throughout all 8 stages winning the event. This also means that you will rarely even see the other cars you are racing with, although this year adds the occasional times where you do see your competitors’ broken down vehicle stranded on the side of the track. This is a racing game that’s just you fully concentrated on the track and your vehicle.

As the driver, you’d be aided by your co-driver who will be reading the track notes for the upcoming two turns – calling out “Left 3 100, into Right 6”, namely, the direction and how severe is the turn (6 is almost straight, 1 is almost 90°), while 100 denotes the yards away from the turn and “into” means a very close next turn. You will need to know these terms to be able to achieve the best times, as there are very little track signages. This year’s WRC also welcomed a new feature in the form of co-op play, where your friend can be the co-driver, and is up to him to properly guide you (or hilariously not) to the finish line (or off the cliff, into a tree, or whichever comes first)

Being an officially licensed game means that the cars, drivers, and teams are based on reality. The locations are official too but they are not exactly replicated, as compared to the accurate representation of F1 tracks in F1 2020.

P.s Malaysians will find a small treat in one of the bonus cars being our very own Proton Iriz RS, so proud! 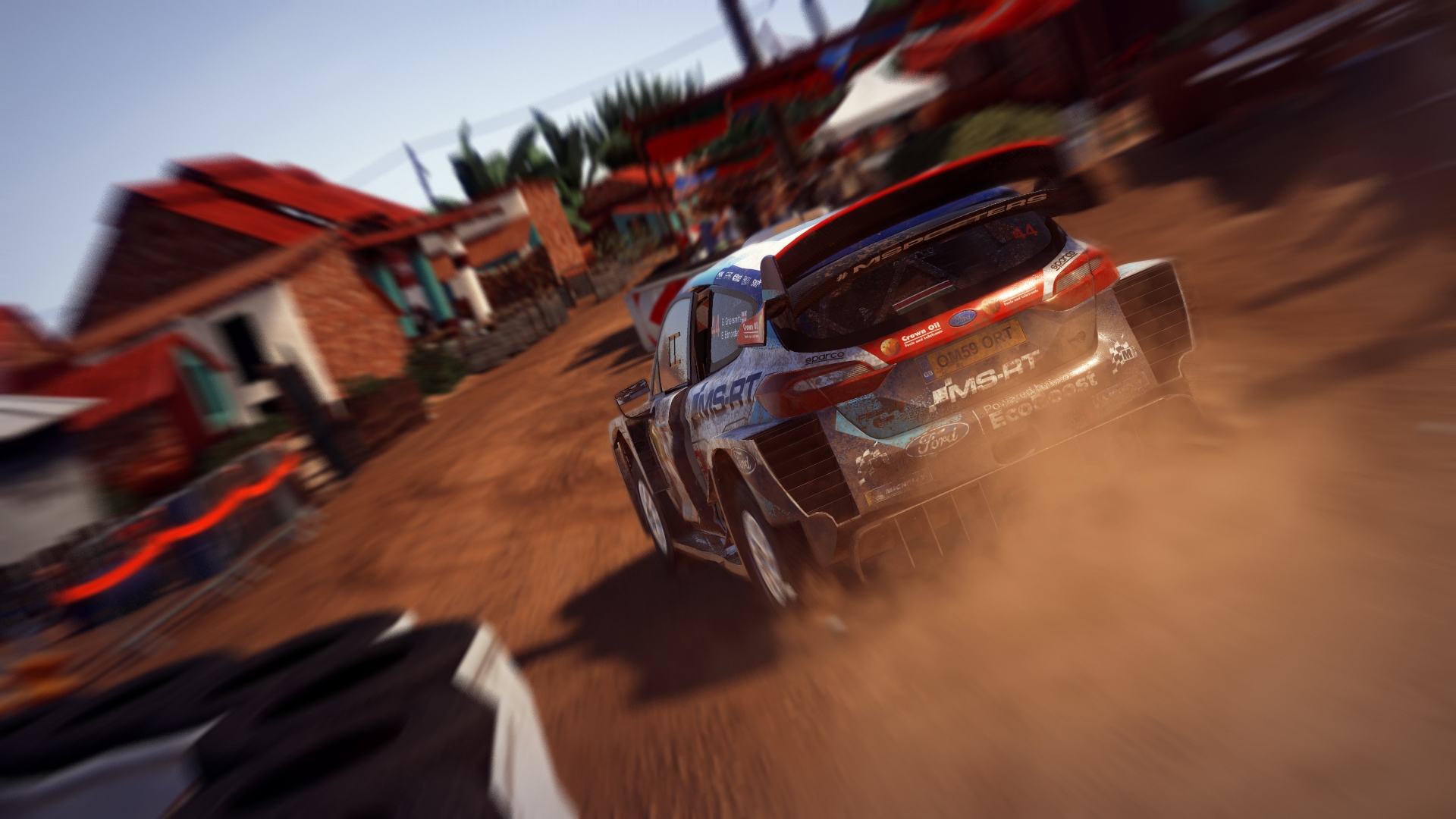 Off the beaten track we go…

The meat of the game is in the Career mode, where you are both the driver and the manager, and this is unchanged from WRC 8. You start out from either Junior WRC or WRC 3, moving your way up to WRC. If you are not who cares about handling the mundane tasks of handling finances, recruitments, and other crew management matters, just head into Season, which is just racing the whole WRC events without the team management part. Or jump into Quick Play, Training, Test Area (to drive on open tracks to test your cars settings), Challenges (special events with special cars, tracks, and extreme weather conditions), or head online to test it driving times against other drivers, and in online events. Standard stuff that was identical in WRC 8.

New this year to WRC 9 is Clubs, an online DIY mode, where you can freely create events by choosing the location, stages, weather, times, and types of cars. You can then invite friends to your Club, or open it to anyone wanting to join the event created by you. Alternatively, you can simply hop into other Clubs and just enjoy their selection. This one addition opens up the longevity of the game, although KT Racing is not the first to implement it, Codemasters did it in last year’s Dirt Rally 2.0.

Understandably as this is yet another numbered yearly release, the changes will are minimally incremental. This year KT Racing has concentrated on the cars, on the handing, and the physics, resulting in the official cars being more well behaved, properly weighted with excellent feedback. Pulling the handbrakes to swivel at a hairpin turn is really fun and usable this year. Running a 380HP RWD car on Kenyan gravel feels significantly different from driving it on the icy roads of Sweden. Graphically the game looks very good with lots of details. There are lesser details at the sides of the track and there are some minor screen tearing, but these issues are not that noticeable when you are driving. However, there is one huge glaring omission, their game is not in HDR. This makes the colors and track visuals kinda bland with less pop, and that’s not a good thing for a racing game that has very little track signage and apex road markers.

Oh, and as on par course for all modern racing games, a photo mode is finally included in this year’s game. Unfortunately, this will be added later in an update. 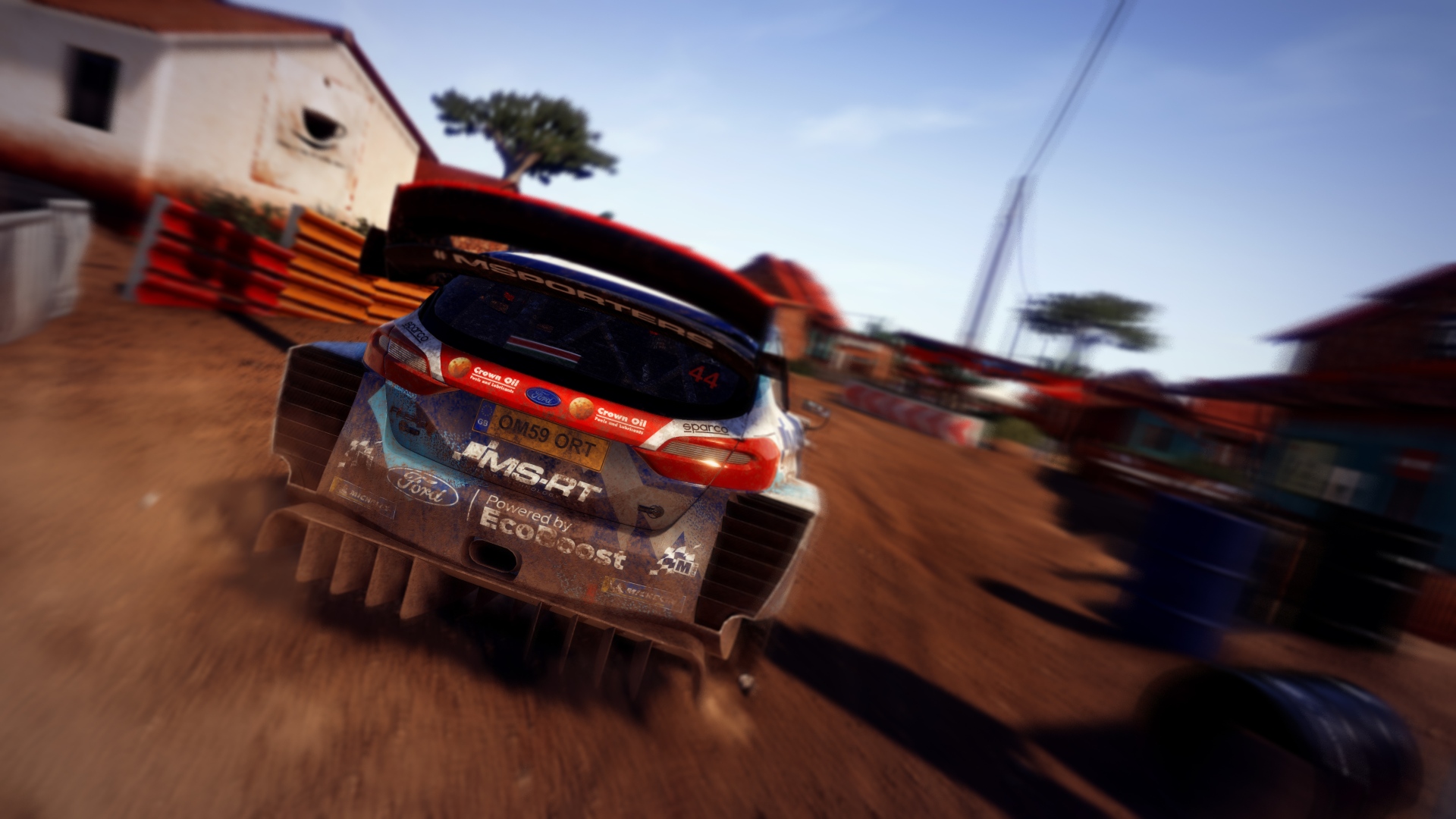 Getting stuck in mud at times…

There are some not so great stuff along for the ride too, some are real head-scratchers, including the lack of HDR as mentioned above.

Competitor AI times can be pretty baffling, and it’s the same across the different difficulties settings. You could be having an almost perfect stage run and loses many seconds to the leader, and yet you could veer off track, flip and reset but end up way ahead of the pack. There is no way for me to verify the AI racing performances, so that’s that.

Vehicle engine notes do sound flat and tiny, and as this is very much one car on track type of race, it does sound like a whiny bike rather than a 380HP race car.

While the official cars of WRC handles well and proper, the same can’t be said for the Bonus and even historical cars. Seeing that our very own Proton Iriz RS is in the game, it was the very first car I took for a spin, in Kenya. The car handles like a joke, it’s floaty and flips with very little provocation. I had even managed to flip it on “3” turns, and I am sure I had not made contact with any boulders or track sides. The same happens with the Porsche GT3, and the legendary Lancia Delta where I struggled to properly steer it out of the corners. Very very strange.

I raced using the Dualshock4 controller and a Logitech steering wheel (the game automatically detected the wheel and defaulted to it). However, the game pauses when the DS4 is disconnected and even as I am able to move the cursor with the D-pad on the wheel, I couldn’t continue on until the DS4 is reconnected.

Another bug I encountered, is at end of the stage in Quick Play, the game wouldn’t upload my times to the server, with an error stating I am no signed into PSN, but I am. I am getting my trophies synced to my PSN fine in the same game session. What I Wish Was Better 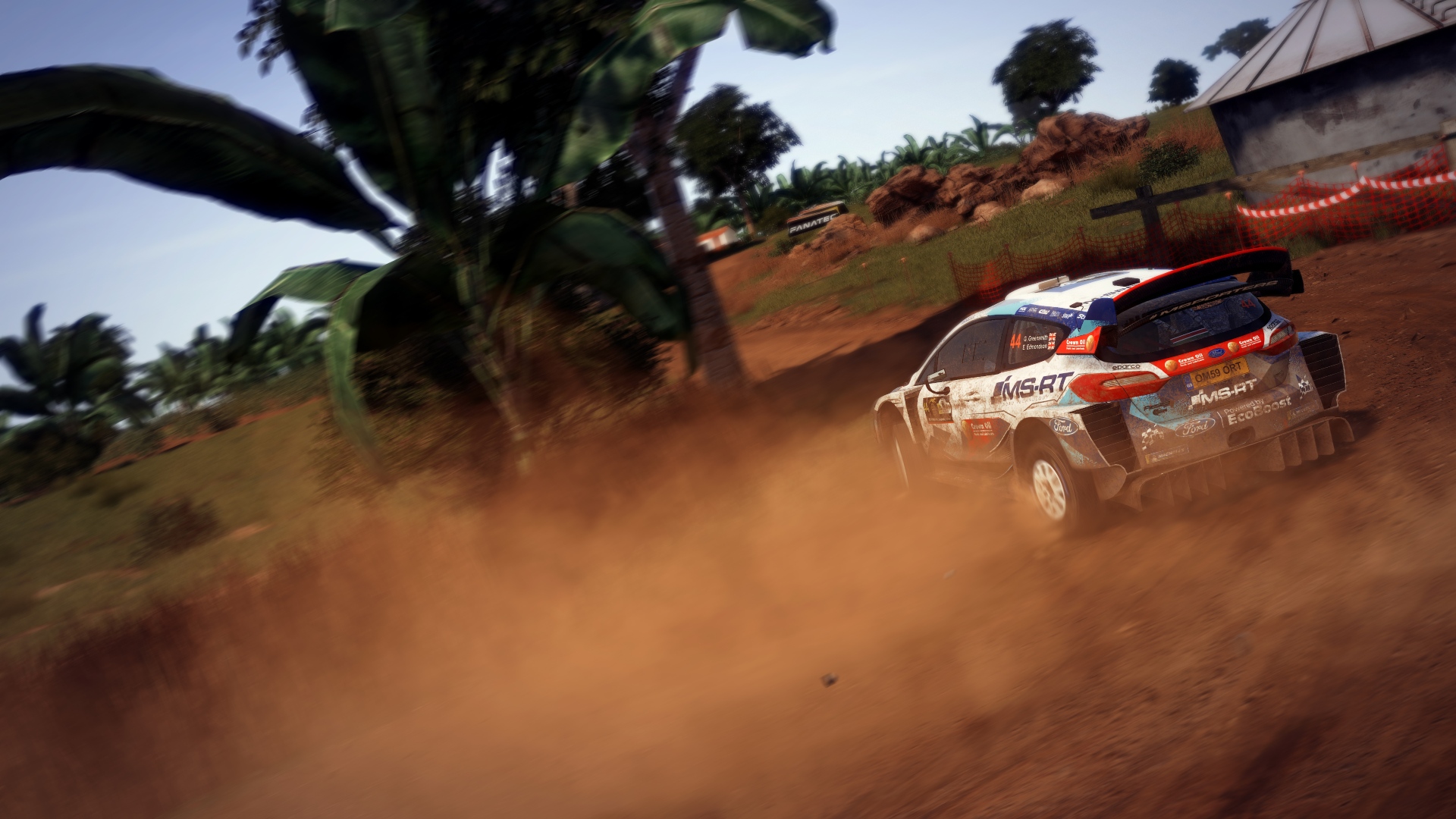 Despite the bugs and quirks mentioned above, WRC 9 is a good Rally driving game. With the very nature of rally racing being precision driving rather than being fast around corners, rally lovers will love the official tracks, cars, and teams while those new to rally games will have to put in more effort into learning the art of drifting an RWD hot hatches on gravel tracks and icy asphalt roads.

WRC 9 is great for rally racing fans, as it’s the only serious rally racing game this year, with Codemasters not releasing Dirt Rally 3.0 but the more arcade-y Dirt 5. 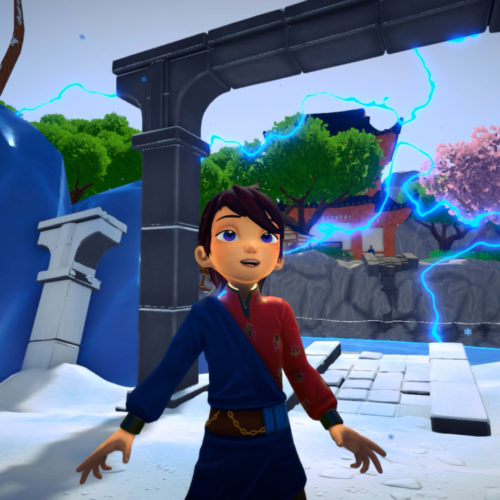 Steven HSK
HSK... Humble, Smart, Kind... Three words that don't at all describe him, and yet it's his online identity that most knows him by. A hoarder, mainly due to him being impoverished, in the past and currently. Loves to collect, keep, but doesn't start nor finish most of the games he collects.

WRC 9 available on PlayStation 5 at launch!