OlliOlli World Hands On Preview – Something Special Is on The Horizon

The year 2021 was full of surprises for us here at BunnyGaming and one of the sweetest ones was when our wonderful friends at Private Division and Roll7 sent us an invite to be a part of an exclusive digital event to play OlliOlli World. As soon as we got the invite it felt like a no-brainer to me and I was just happy to confirm my interest in being a part of this important event.

I’m a straight shooter so I usually speak my mind almost too literal to a fault (most times to my own detriment) and the reason why I share that is because when it comes to the genre of games that OlliOlli World is clearly in, my interest level is close to none. That usually is because I’m not particularly gifted when it comes to sports (real or virtual) but I do have fond memories from my childhood where there was the predictable skater phase and my brother used to watch the X-Games a lot with me right there with him. I didn’t fully understand back then why I was so enamoured by it but just watching the skaters taking big risks or just going through an almost perfect run was unexplainably beautiful. 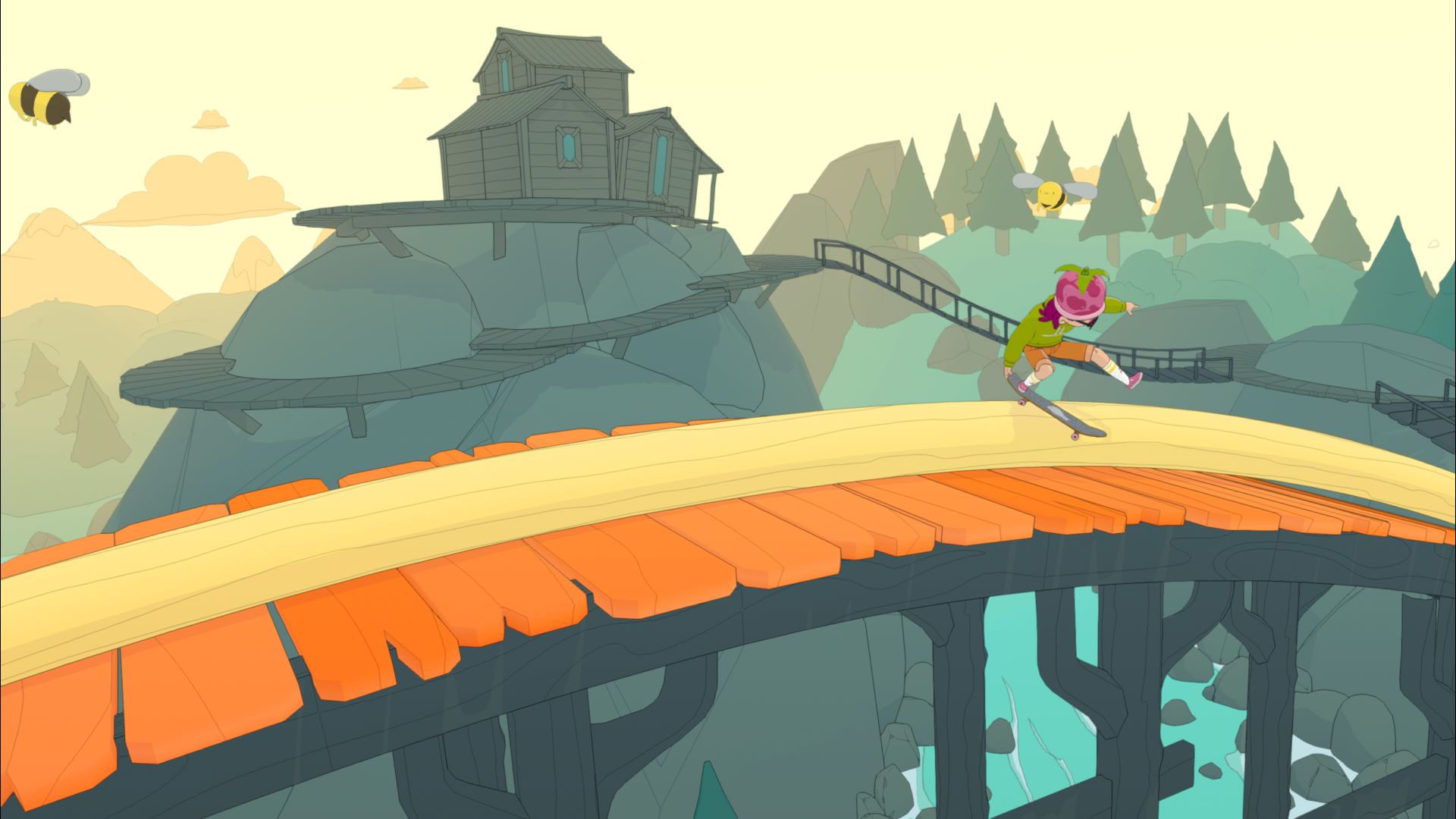 After spending the better part of this past week grinding, doing tricks, spinning, doing manuals, and skating my way across Radlandia I feel like the team has so far done an amazing job of creating an easy game to get into that can be hard to master with a ceiling only as high as the skill level that players will no doubt be pushing and I for one really cannot wait to see the poetry in motion the community for OlliOlli World will come up with. 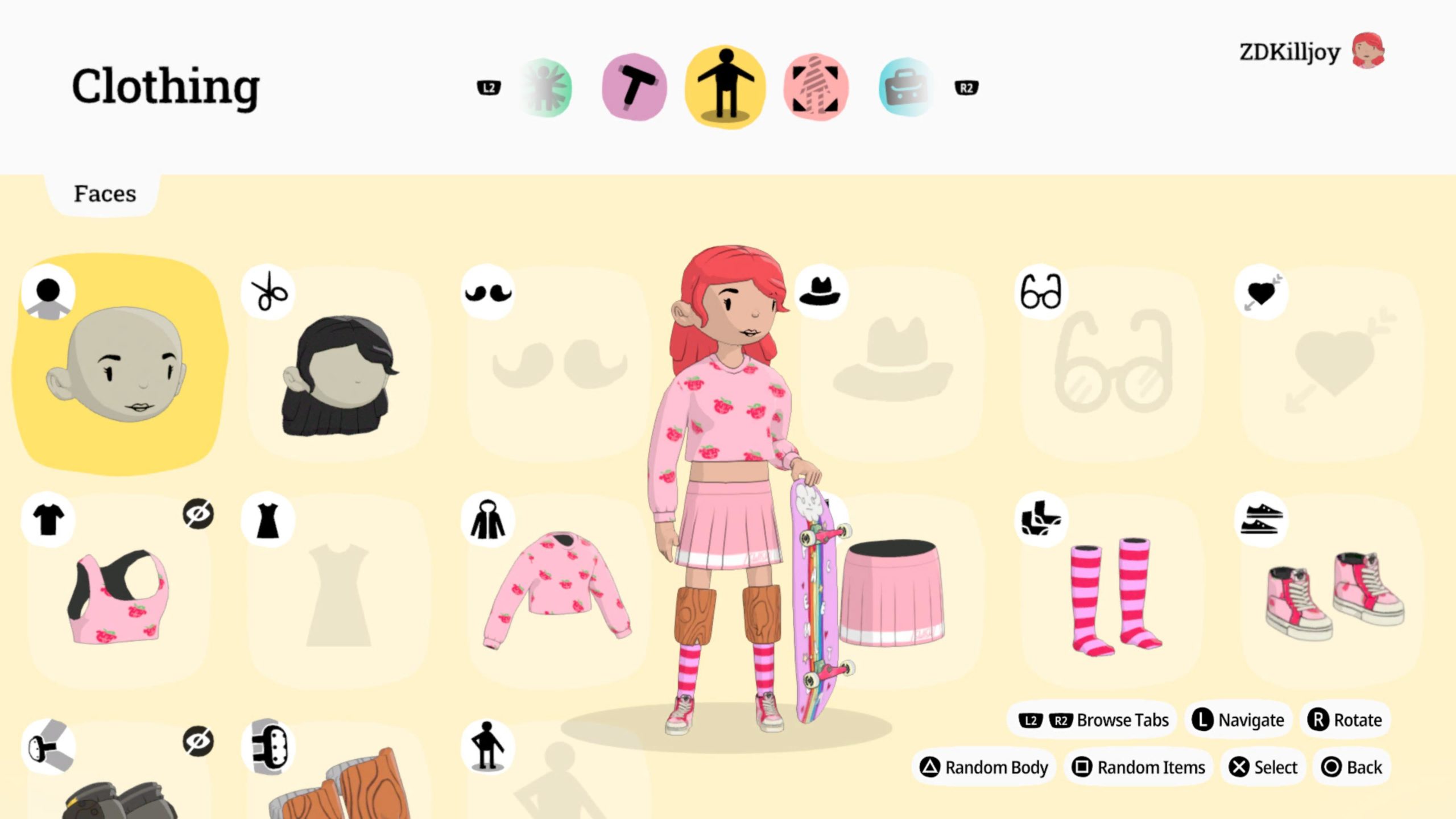 One of the very first things players would have to do is create the look of their skater and I really liked how although there was an option to just randomize a look and set off but there was also quite a few tabs of customization afforded to players. In total there are five customization tabs that include clothing options, body types, grab types, poses for certain situations, and even setting up the look of your board. I wouldn’t call it the most extensive character creator but it definitely was not something that is throwaway. The level of personalization option is a lot to start with and opens more just by playing the game. 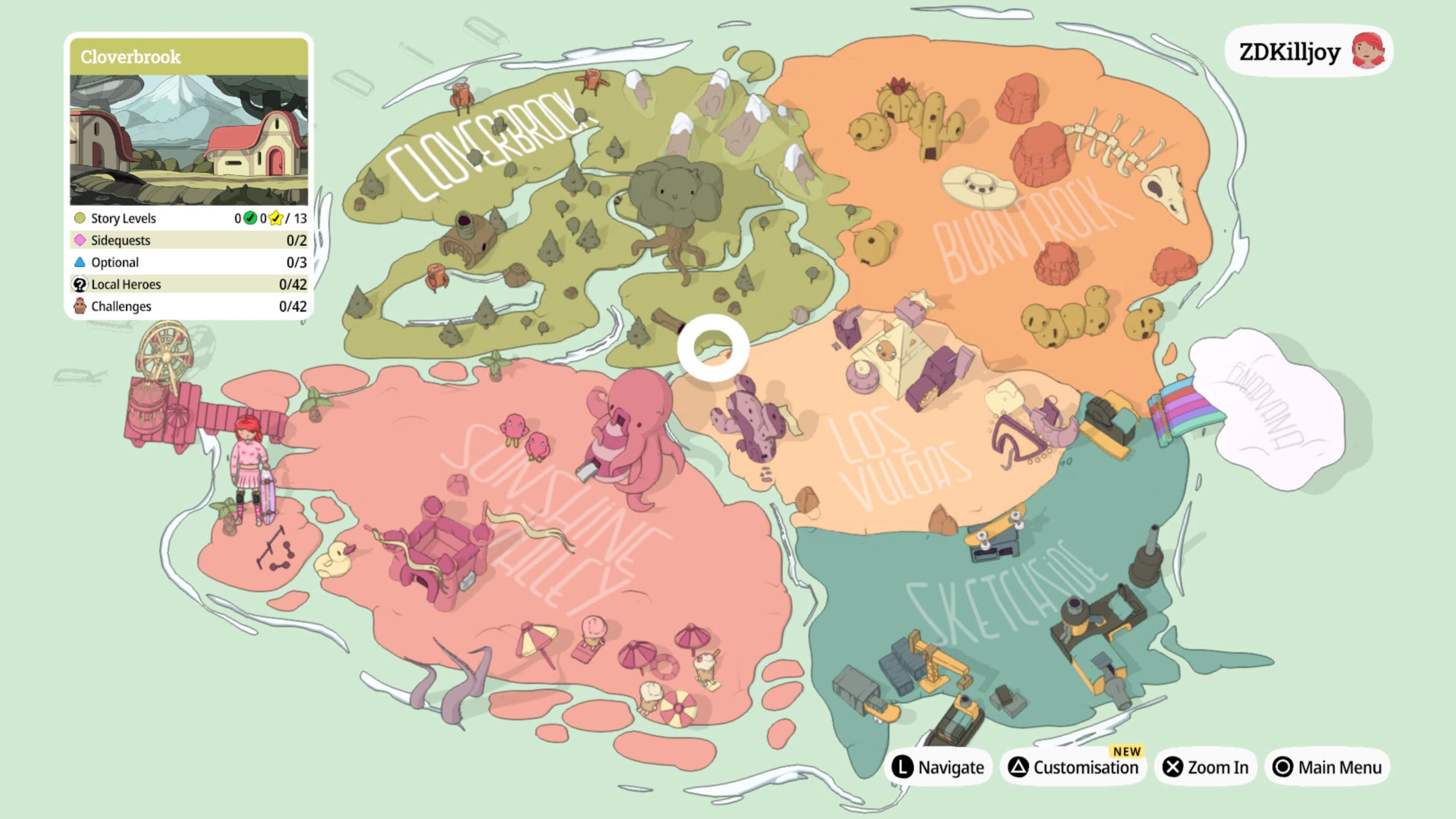 After players are done creating their ideal skater they will soon be dropped right into the charming world of Radlandia. The basis for your journey in Radlandia is when Chiffon a skate wizard who travels the land with her crew identifies the player as a worthy successor. I liked how the set-up was simple and the team itself were very likeable from Suze who functions as the camera crew documenting your journey, Mike the hype master who also throws out extra challenges for the player to do, and Dad (who isn’t anyone’s real dad) responsible for styling the player. The player then travels across Radlandia to meet each of the skate gods on their way to Gnarvana. I found myself enjoying the story much more than I thought I would as some of these types of games tend to just put out something quite forgettable. Each of the characters has their moments to shine and I appreciated that. 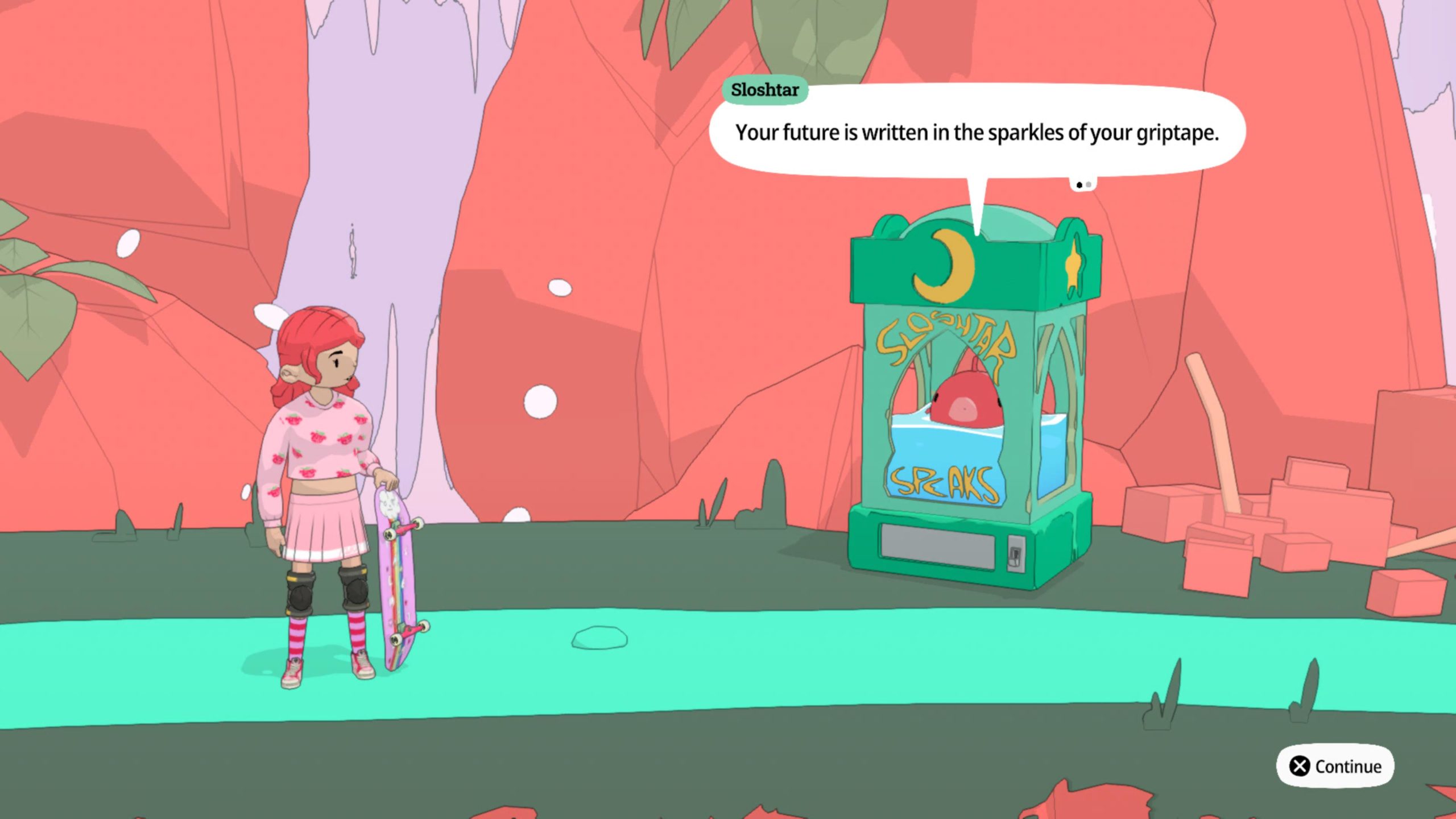 I played this build on the PS5 and I must say it ran really well except for a few parts that I’m not too sure if it’s something intentional or not but can feel slightly jarring. The cartoonish aesthetics for OlliOlli World absolutely works and the zones players go into are varied and interesting but when it came to the cutscenes the jarring aspect I mentioned earlier was how the animations for the characters are sort of presented in a stop-motion way which at times feel intentional but other times feel like it’s something that isn’t working correctly. The reason why it feels jarring is because I can totally buy into the stop-motion aspect of it (again only if it’s intentional) but what makes it jarring is how animations that pass through in the background just move so smoothly so it feels off. Otherwise, the game looks and plays great.

One of the biggest things that truly surprised me was how the soundtrack for OlliOlli World is (my own personal opinion) absolutely amazing. I know the argument can be made how games of this type always have soundtracks of this nature, but I just found myself repeatedly taking a moment to appreciate how the music in this game feels truly like one of the best ever because of how well it fits with every single aspect of the game. Even while pulling difficult grinds, tricks and airs it felt like I was truly on a spiritual skating journey that I can just enjoy even if I wasn’t performing as well as I wanted to. 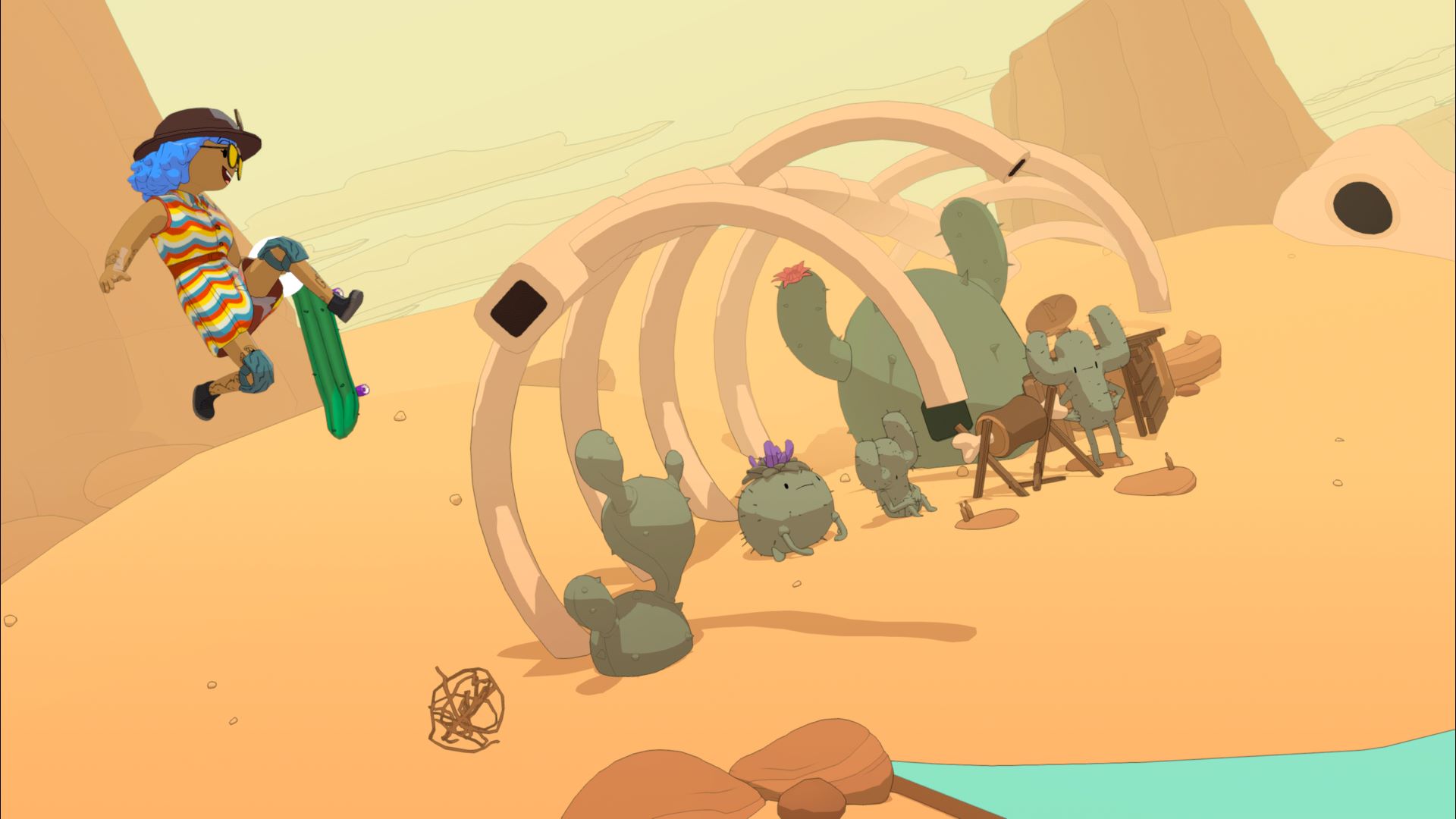 Sure it looks and sounds great but how is the actually skating in this game? I found it to be really well-tuned. I never once felt like I was out of my depth as it was easy to get into but it truly is a game that is built for players who if they choose to can shoot for the moon in how skilled their runs can be. Part of why it worked so well for me is how the game slowly unfolds different skating tutorials at various parts of the game without front-loading everything like how most games typically do. It afforded me the space and time to go through my journey without the added pressure of needing to know what the hell I was doing and to do it impressively. Admittedly some of the later areas did ramp up the difficulty especially if you plan to complete all the side quests and challenges.

There are certain missions that players can do to unlock side quests that provide specific targets to achieve. Most of the standard missions require players to just be able to get to the finish line to move to the next one but for those who are competitive, the developers have also wisely included added layers of challenges for specific parameters to be met during the run and score targets. After completing the run first time as well players are also introduced to a rival score that they can choose to try and beat by replaying that mission.

I appreciated how the developers have created a progression system that is as competitive as the player would want it to be but never locks them out of completing and moving on. There is even the Gnarvana league that resets every 24 hours that players can choose to enter and based on how well they do allow them to pit themselves against better and high scoring players to climb the ranks. The Gnarvana Portal is another addition where players can generate a unique level that can be tuned by difficulty for a direct means of competing against friends to see who can get the better score. 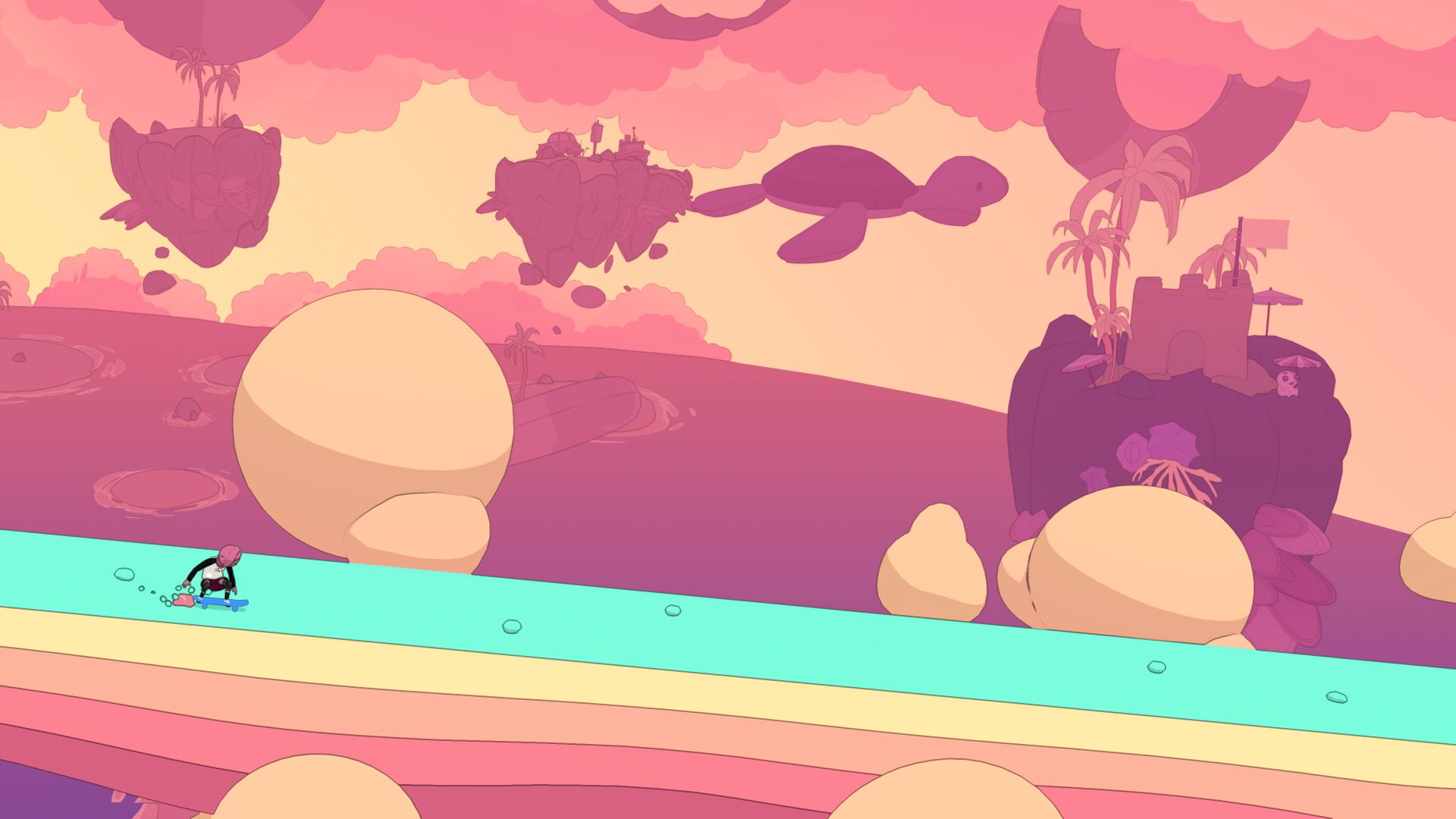 I have a sneaking suspicion that OlliOlli World is going to be an underrated game of the year contender and I certainly hope not because based on this build that I got to play I really hope that more and more people pay attention to this game because I truly do feel that it is something special. I am very thankful I had the chance to play this near-final build and when the final release does come I really think this is going to be my go-to game to de-stress and just enjoy a run or two whenever I can. I really can’t wait to play the full game when it comes out.

Rollerdrome Review – Are You Not Entertained?