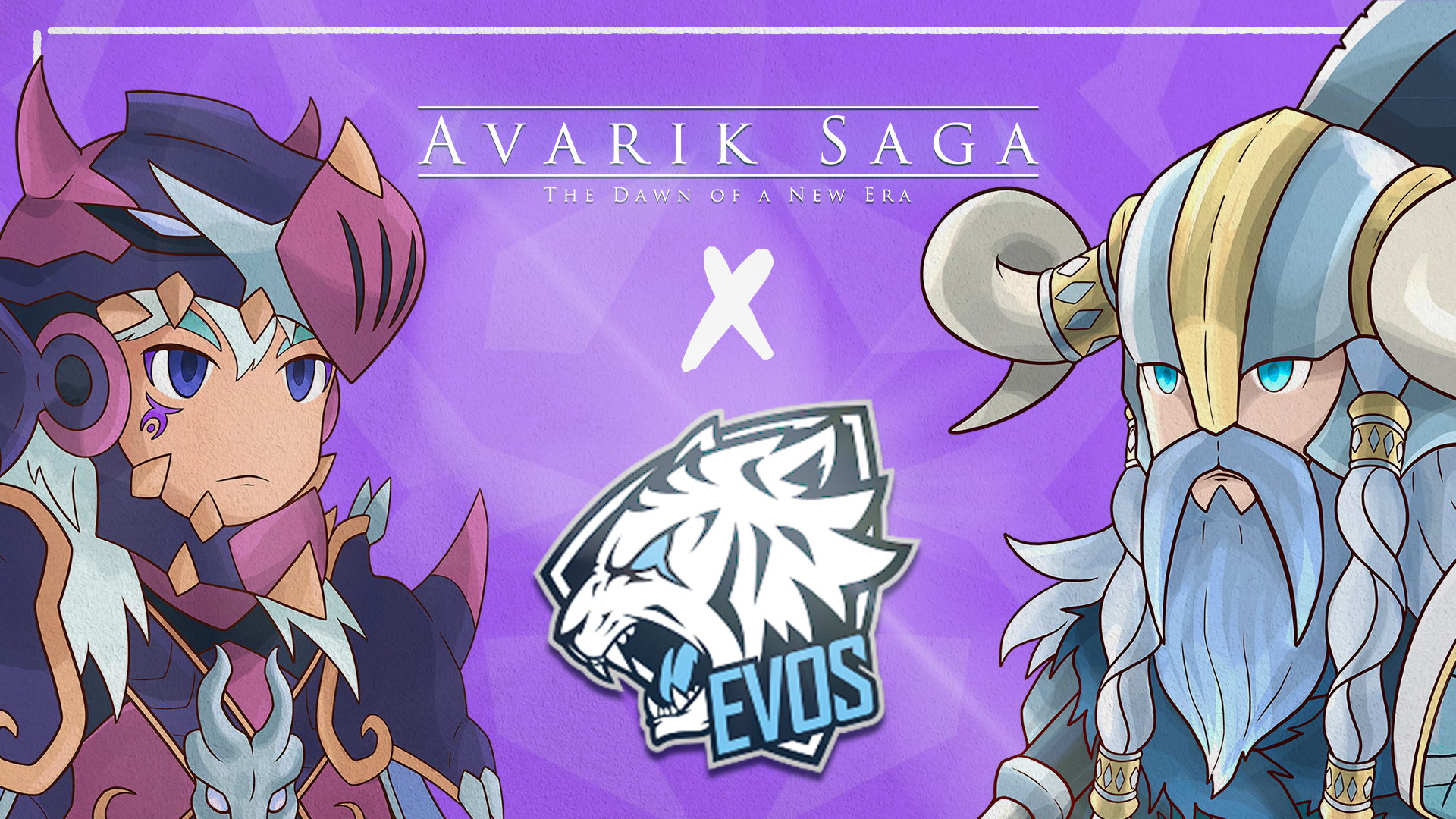 In efforts to expand its arsenal of games, EVOS has been relentlessly focused on adopting blockchain-based games as blockchain technology is exponentially growing in Indonesia and the rest of SEA. To kickstart this expansion, EVOS has exclusively chosen Avarik Saga as its first NFT(Non-Fungible-Token) P2E (Play-to-Earn) Metaverse game based in Indonesia. Avarik Saga is a strategic team-building game under the Japanese RPG genre that is committed to bringing the modern game experience into the NFT Metaverse space.

The first phase of the game will be a PvE (Player versus Environment) dungeon crawler, where the player can strategically combine three heroes (NFTs) with different factions, classes, weapons, skills, and other details to conquer dungeons, similar to Summoners War. The player will be able to collect resources, craft materials, and level up characters, skills, weapons, and armor, giving them a full role-playing experience in the Avarik Saga metaverse.

In September 2021, Avarik Saga released its first playable NFT character collection of 8,888 genesis NFTs, which were sold out in less than an hour. Currently, this genesis collection is available for trading in a secondary NFT marketplace called OpenSea. Holders and future players can wait for the official launch of the game in Q3 2022.

“We want to bring fun into the NFT P2E Metaverse gaming space. In the end, the core of the game itself has to be enjoyable. A strong lore that entices the user to the Avarik Saga Universe, a clear game mechanic that is engaging, and content that makes the player want to come back is key – P2E is a mechanism that can only be a worthwhile venture if the game drives excitement and value to the community.”

While leveraging the enticement of RPG gameplays, Avarik Saga itself has the long-term goal to use its play-2-earn (P2E) format to help accelerate the mass-market adoption of NFT gaming in SEA countries.

“Indonesia specifically, as the world’s 4th most populous country, has 111 million gamers. So we want to develop an attractive game that appeals to the masses, even ojek drivers and warung (small shop) owners, so they can earn real money while experiencing a digital world,”

The partnership between EVOS and Avarik Saga aims to introduce blockchain technology to potentially untapped audiences in Indonesia and other SEA countries. For example, people who have not previously engaged with NFTs or games in general.

Aelia The Fire Sorceress 🔥
Behind her amazing power, there's a dark secret that never revealed. Curious to know?

Come join us in the Avarik Saga Universe and understand where it all started.

EVOS believes NFT P2E Metaverse games like Avarik Saga can empower fans and communities, and that a local partnership such as this is the right step to advancing their organization’s roadmap as the first blockchain game company in Indonesia.

Avarik Saga is the first NFT P2E Metaverse game in Indonesia and the first JRPG NFT P2E Metaverse game globally. Backed by various crypto native investors, guilds, and esports teams, Avarik Saga aims to be the leading NFT Metaverse creator in Indonesia, opening the doors to a P2E (play-to-earn) game for its diverse community, revolutionizing the current gaming industry. Focusing on the Japanese RPG genre, Avarik Saga is committed to driving the modern game experience into the NFT space.

The game is set in Avarik, a unified kingdom of four territories under four factions (Glaica, Ignis, Terra, Tenebris) in a secret conflict to win the kingdom’s heart. With heroes ranging from knights, marksmen, and wizards, players aim to battle, recruit(breed), collect, raise, and conquer land to prove their strength.

The metaverse has a player-owned economy where players can truly own, buy, sell and trade heroes, weapons, armour, and the land they earn in the game through skilled gameplay and contributions to the ecosystem. Avarik Saga is committed to going beyond a game for blockchain players to the peak of a modern game that will introduce blockchain to millions of players.

Proud to announce our official partnership with @evosesports to be their first official NFT P2E Game in the ESPORTS market. Welcome aboard, ROAR🐯!
#AVRK #EVOS #ESPORTS #NFT #CRYPTO #Ethereum pic.twitter.com/MS3rCn53Pi