Kingdomtopia: The Idle King is an idle management game by Joyseed Gametribe about rebuilding a kingdom of animals, officially launched on Google Play and the App Store today.

Play as Prince Snow, a clumsy leader who is tasked to rebuild the once great and prosperous Kingdomtopia. Having slept through an epic war, Snow became the new king of his homeland after his father sacrificed himself to protect the kingdom from an unknown attacker. Now, it is up to Snow to fulfill his destiny as the one true Idle King and restore Kingdomtopia to glory. 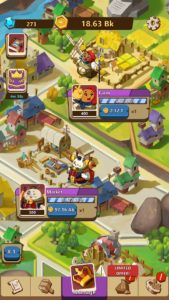 In Kingdomtopia: The Idle King, you’ll manage a variety of colorful districts that make up the core of your kingdom. Renovate a farm district, repair a seaport and various other wacky districts to start collecting coins and amass your wealth!

As your kingdom flourishes, you’ll be able to hire fun mayors to help you manage each district and collect taxes even when you’re away.

Kingdomtopia is full of interesting characters to meet and interact with, such as Pugg, your loyal yet sassy advisor, or Helga, an ex-pirate who now works as the mayor of your port district. You’ll also be able to communicate with your late father King Siff, who will offer words of wisdom and uncover royal heirlooms you can collect to bring Kingdomtopia to greatness and further prosperity!

Kingdomtopia: The Idle King is now available worldwide on Google Play and the App Store. Amass your wealth and show the world that the “Idle King” title is not earned by simply doing nothing… but by successfully managing the kingdom itself. Your kingdom is just one tap away, my king!

NieR Re[in]carnation, Pre-registration is Now Opened for The West!