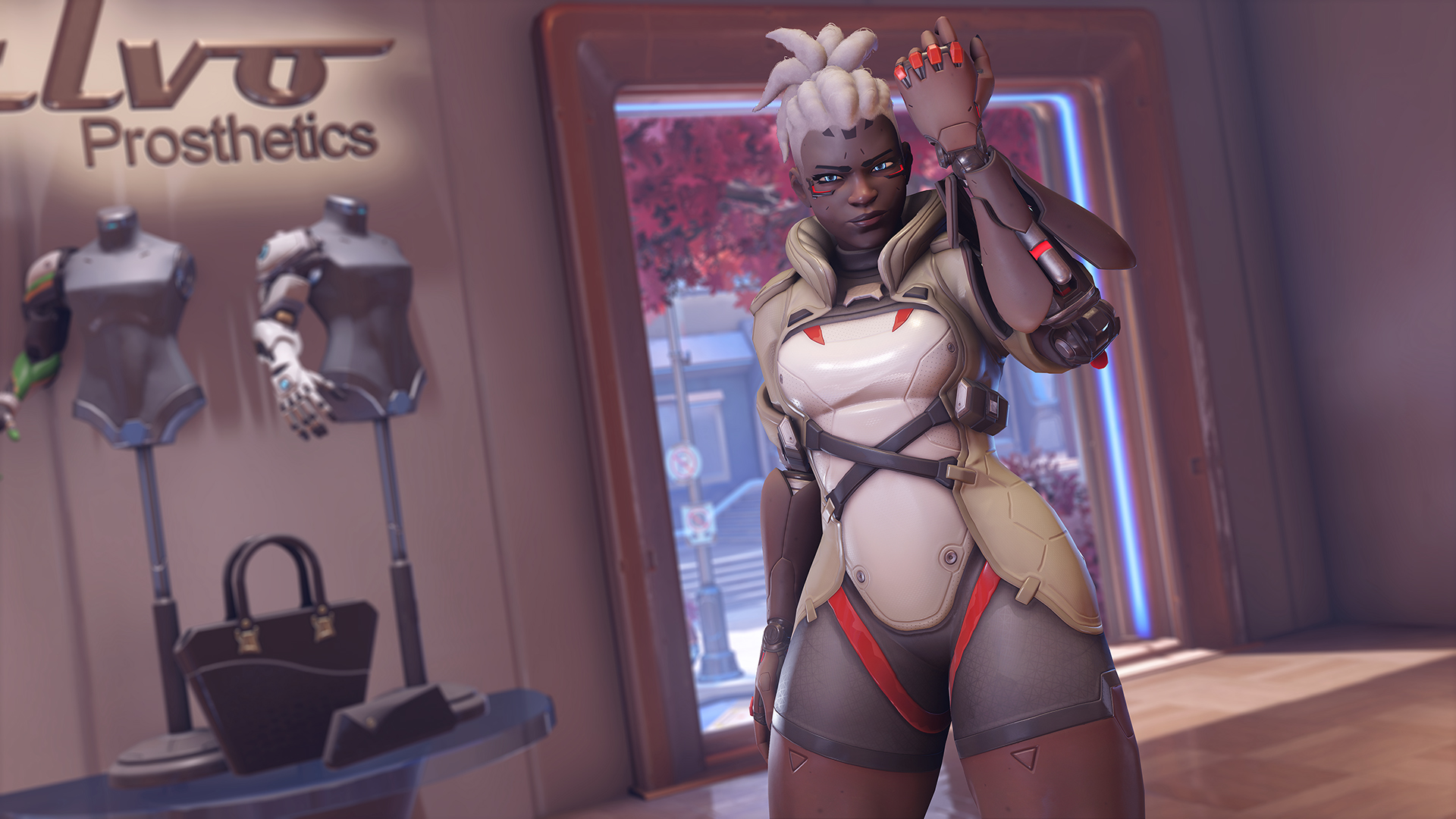 Sojourn is now ready to deploy. As the former Overwatch Captian, Sojourn’s field abilities are designed to plan, lead, and execute strikes on her opponents.

Sojourn is the 33rd Hero in the Overwatch roster and she brings a unique mid-range gameplay experience and a lot packed with some incredible mobility and artillery. Senior Hero Designer Josh Noh has been leading the charge on her gameplay development, while Narrative Designer Miranda Moyer wrote many of Sojourn’s in-game voice lines. They’re both here to give us insight into her conceptualization and play style.

The Railgun’s primary fire is a rapid projectile that generates energy on hit. The energy Sojourn generates from her primary charges up her secondary, which is a high-impact shot that consumes the stored energy. “The Railgun is where Sojourn started,” says Noh. “We wanted to make a mid-range hero that rewards accuracy, but still make it fun for varying levels of skill and gameplay.” Sojourn can be a difficult hero to play—the more accurate your aim, the more effective you’re going to be with her Railgun, resulting in a high skill ceiling with a lot of power weighted in her Railgun’s secondary fire.

Her playstyle highlights her character and personality. “Sojourn’s someone who is super detail-oriented and thorough, which I think leans into her kit being accuracy-heavy. She is a brilliant tactician and definitely a ‘measure twice, cut once’ kind of person,” says Moyer.

Disruptor Shot is an AOE ability that will snare enemies and eat away at their health. Sojourn can use this to increase the effectiveness of her Railgun. Early prototypes of this ability did massive damage to barriers, but the ability was finalized to complement her secondary fire. “Disrupter Shot evolved from shredding barriers to slowing enemies down with a snare that allows Sojourn to get an easier shot with her secondary fire.” 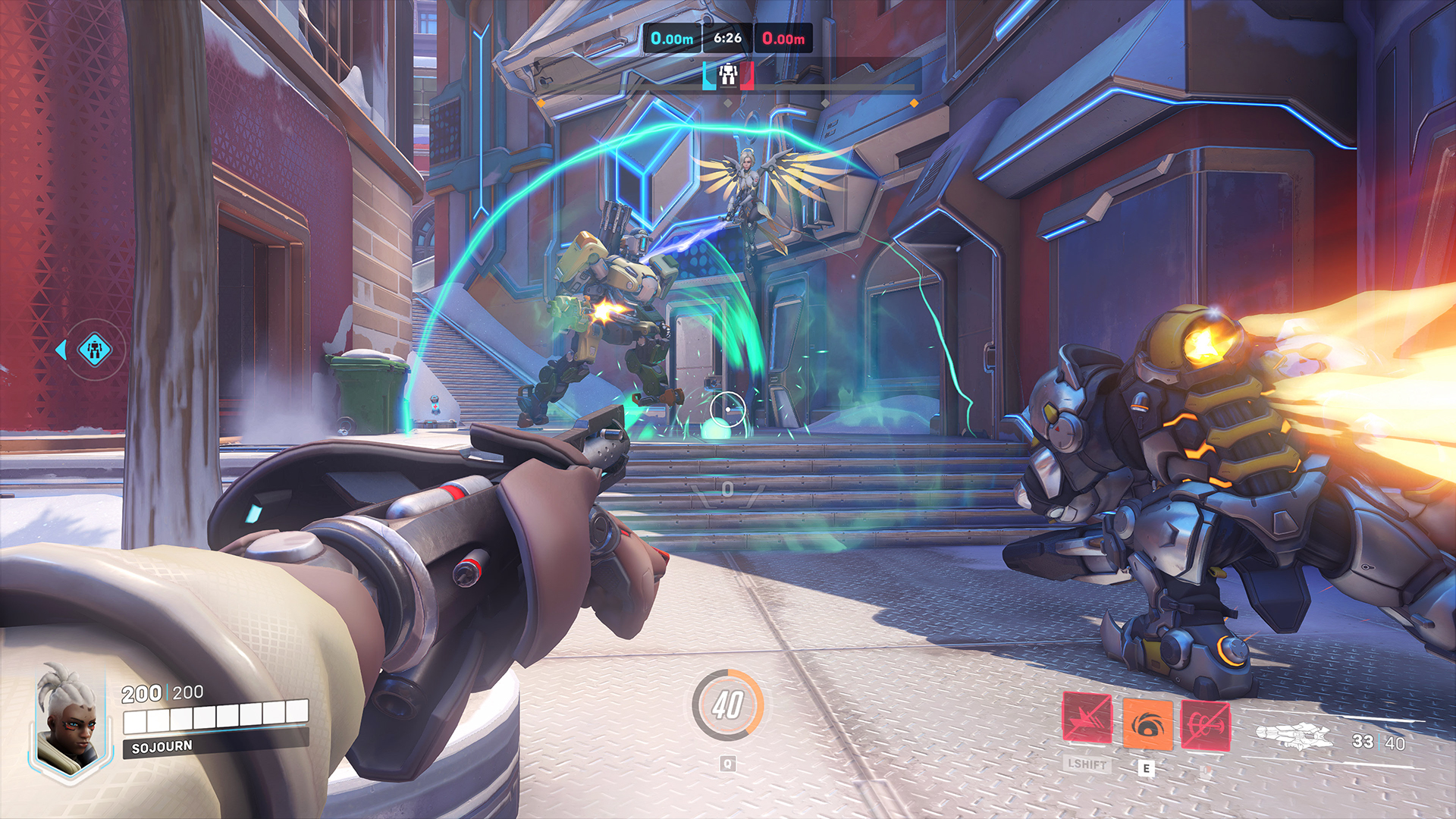 It’s best to keep your eyes on Sojourn; if you get caught in her Disruptor Shot, there’s a good chance she has you in her sights. “Sojourn’s cybernetic abilities help her eliminate variables,” explains Moyer, “The disruptor shot has a slow that improves her odds and makes her more accurate, minimizing any chance for mistakes.”

Sojourn’s Power Slide adds remarkable mobility to her kit. It’s a rocket-powered slide that can be cancelled into a high leap at any time by jumping. Utilize this ability correctly and you’ll be able to quickly reposition Sojourn. “We wanted to add a vertical element to her kit to enable her to quickly access high-ground vantage points and help solidify her role as a mobile damage hero,” says Noh. 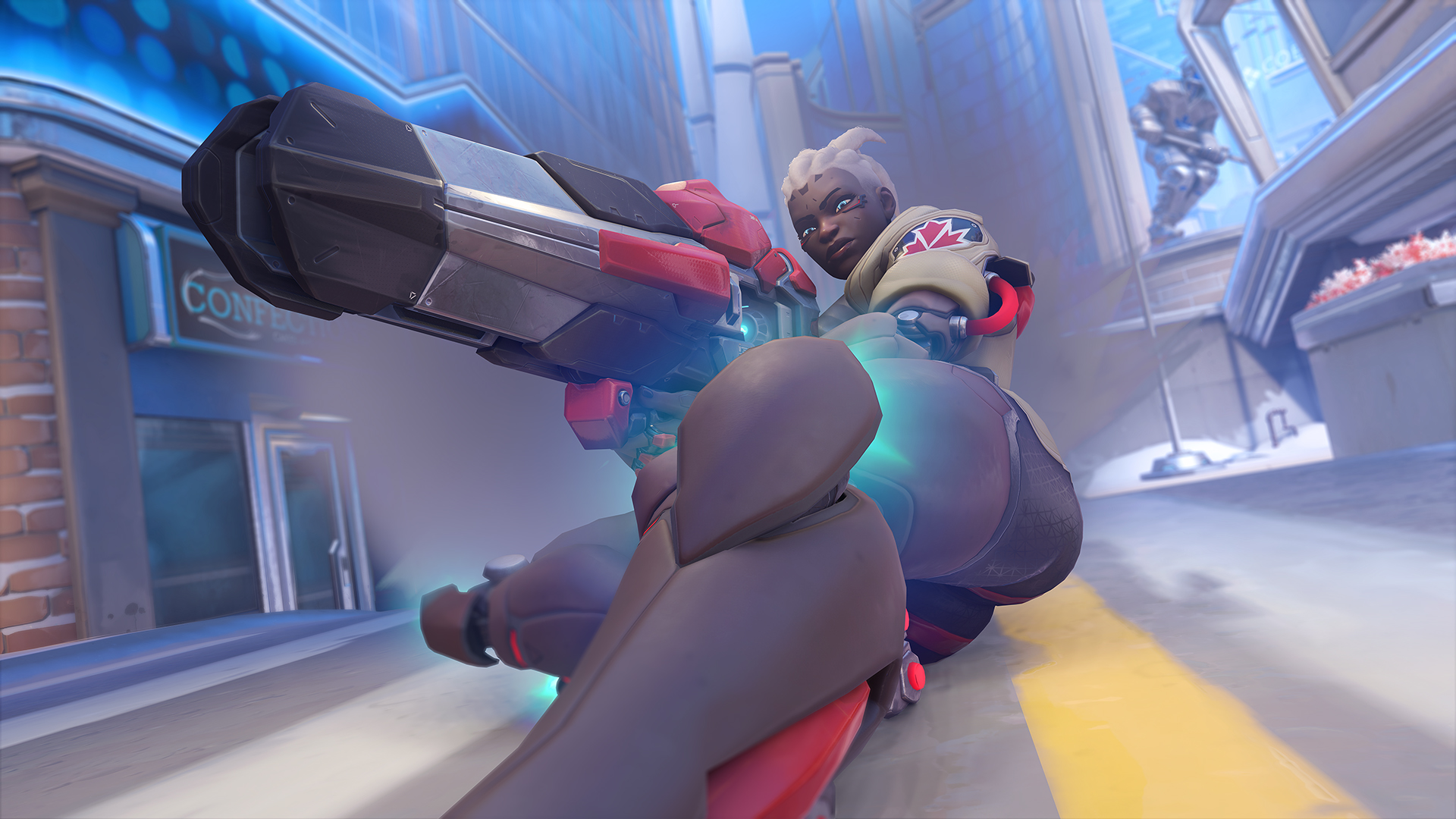 “Her abilities are baked into her cybernetic body that allows her to execute her objectives,” explains Moyer. “Sojourn has had a lot of cybernetic upgrades in her life, starting out of necessity in her childhood. Eventually, she started opting-in for cybernetic upgrades when she was in the military.”

Sojourn chose these abilities to become the most effective fighter she could be— a stark contrast to her fellow Hero, Genji, who was forced to take his cybernetic body. Her cybernetic body and abilities are a means to an end, but only her objective matters.

Sojourn’s Ultimate ability automatically charges her Railgun’s energy for a short duration and allows her shots to pierce enemies. 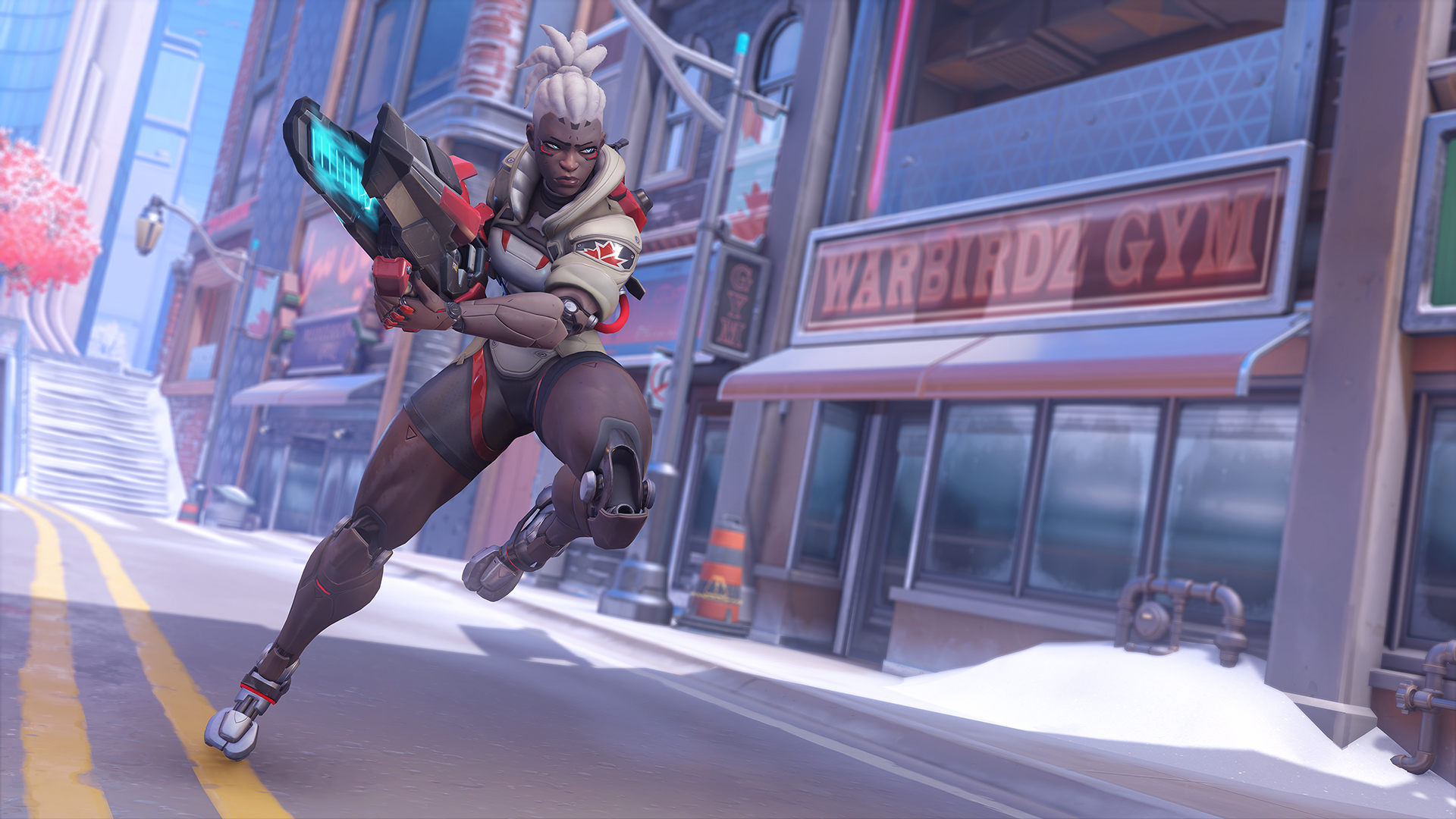 Overclock is another example of how mechanical skill and accuracy is greatly rewarded with Sojourn’s kit. When she activates her ultimate, her Railgun’s secondary fire will enable her to quickly eliminate enemies with high-powered shots. “We wanted it to feel almost like the hitscan version of a Genji Dragon Blade,” says Noh. “You will have a limited time to make a big play… or you could miss all your shots.” 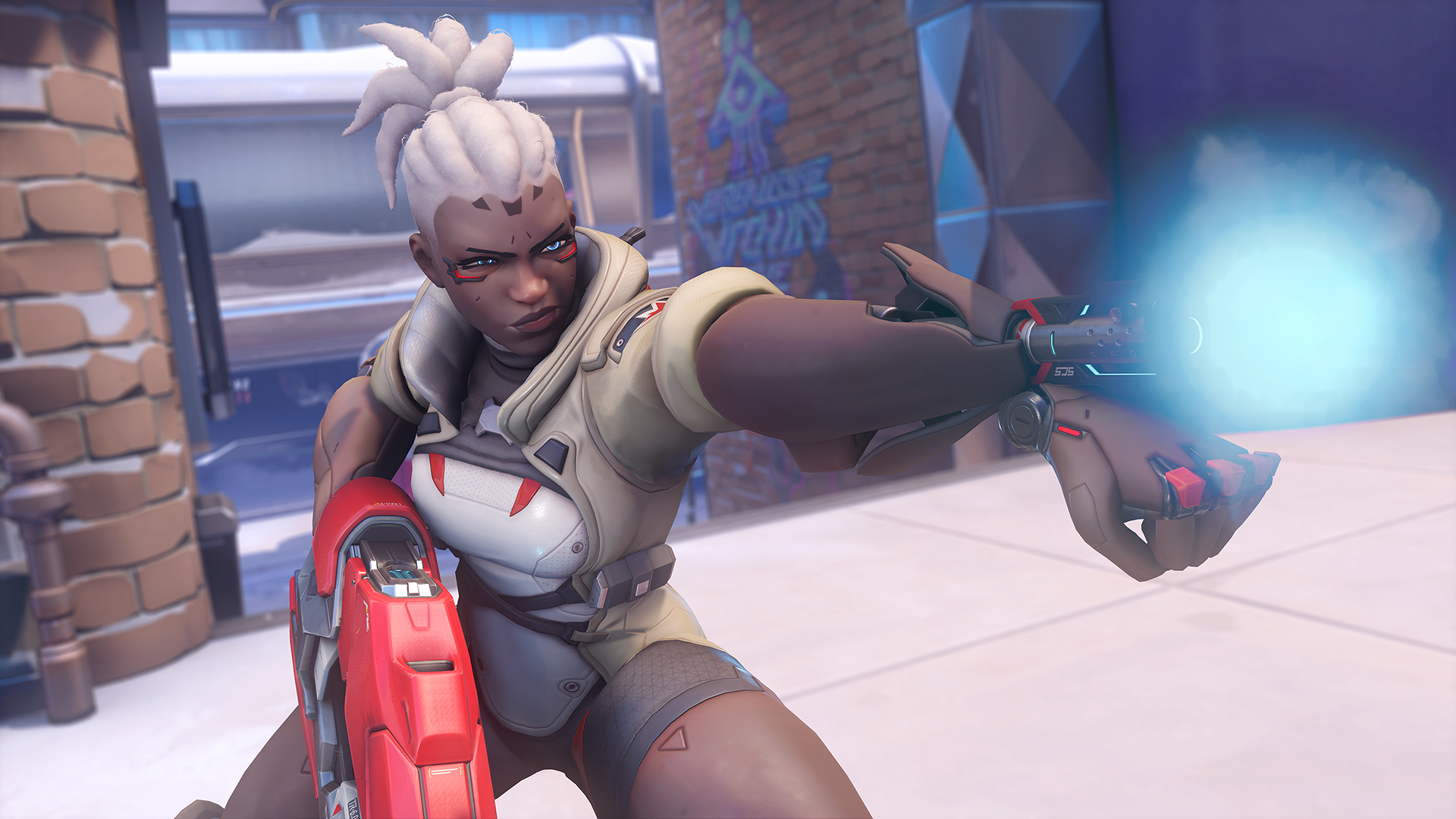 We’re anticipating her gameplay to evolve, but we have noticed trends throughout testing up to this point. “She’s probably not going to be a hard flanker, but it’s easier for teams to spread out in a 5v5 world. You can poke from wider angles, and that’s where Sojourn’s mobility becomes important.” Power Slide enables Sojourn to skirmish with enemies and then retreat to her team when she needs help. “We’re looking forward to seeing how people play Sojourn in the upcoming April 26th beta! We know she has a high skill ceiling,” Noh says, “so the team will be looking at how she performs at different skill levels to make her feel good for everyone.”

This is an important moment for the Overwatch team because they feel Sojourn represents what makes Overwatch special, both as a game and an idea. The world could always use more heroes, and the choice is yours to answer the call.