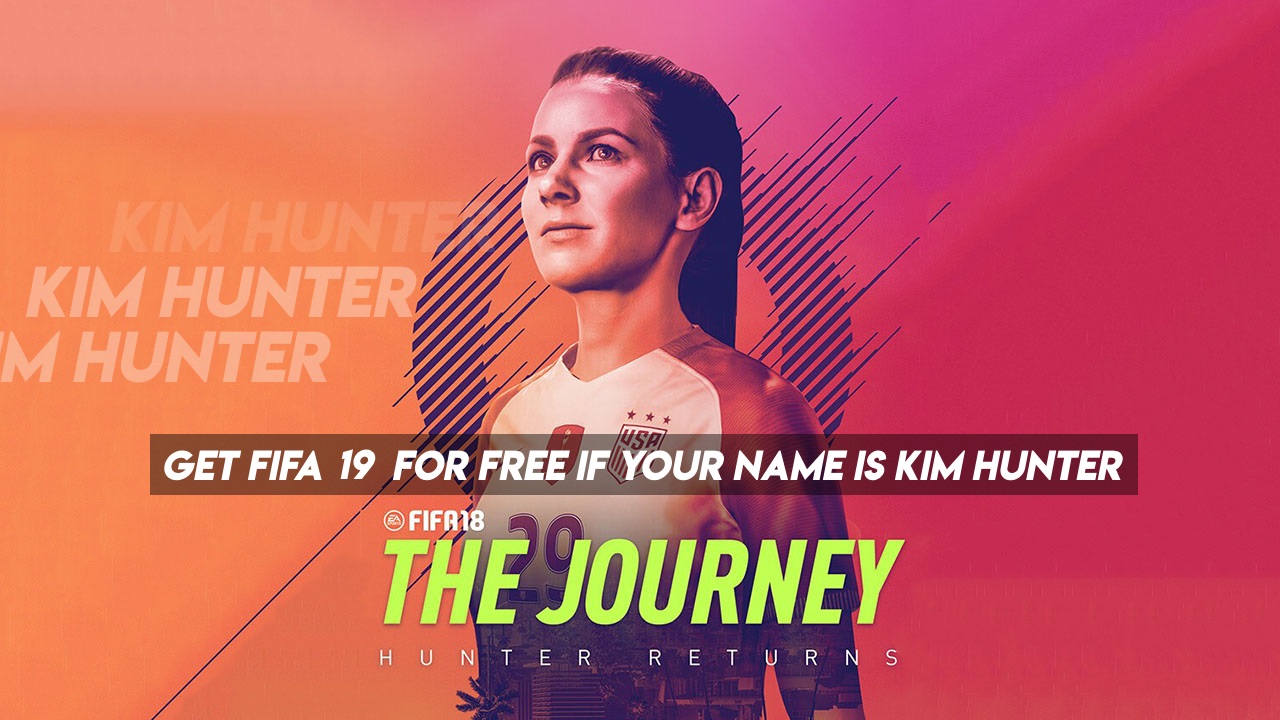 Free FIFA 19 for you if your name is Kim Hunter and if you live in the UK. Not the Ulu Klang UK. The United Kingdom UK.

GAME celebrates the launch of FIFA 19 by giving away free copies of the game to fans named Kim Hunter!
Walaoweh! GAME, (a game store based in the UK) is giving away free copies of the new FIFA 19 if your name is ‘Kim Hunter’. Chances are, most of us if not all of us in Asia won’t qualify for this deal. If they say ‘Kim Jong-Un’, then can lah, there is one brother there in North Korea who can claim. For those of you who don’t have a clue on who Kim (Hunter, not Jong-Un) is, Kim Hunter is a new addition to the FIFA series and the first ever female player. Kim is ready to take her career to the next level in The Journey: Champions with a call-up for the Women’s World Cup. Kim is also the half-sister of Alex Hunter, the main character in the previous two FIFA games series.

The deal.
Anyway, if your name is Kim Hunter and you happen to live in the UK, then this is for you. The rules are simple – just be one of the first 20 Kim Hunter customers in 10 selected stores across the country between 10 am to 2 pm on Friday 28th September and you’ll receive a free copy for either the PlayStation 4 or Xbox One. Note that copies of FIFA 19 on PC, Nintendo Switch, Xbox 360 and PlayStation 3 are not available through this promotion.

The chosen stores are:

You are an “Eligible Customer” if:
• Your given name is “Kim” or the first three letters of your given name are “K”, “I” and “M” in that order; and
• Your surname is “Hunter”; and
• You have and can show our staff, a government-issued photographic ID (e.g. driver’s license or passport) that shows that your name fulfills the above criteria.

You aren’t an “Eligible Customer” if:
• You are known as “Kim”, but your ID doesn’t show that name (other than where the first three letters of your given name are “K”, “I” and “M” in that order);
• Your given name is pronounced the same as “Kim”, but is spelled differently;
• Your surname is pronounced the same as “Hunter”, but is spelled differently;
• Your middle name or surname is “Kim”;
• Your given or middle name is “Hunter”;
• Your given name isn’t “Kim” or your surname isn’t “Hunter”; or
• You don’t have appropriate photographic ID with you when you go to a Participating Store. Our decision as to eligibility to receive a free copy of FIFA 19 is final.

For fans that aren’t blessed with the Kim Hunter name then GAME have an exclusive offer by giving away free Ultimate Team Points when you trade in for FIFA 19 across all stores. (Also for those in the UK only)

EA SPORTS FIFA 19 teams up with Bundesliga to give fans a chance to vote for the Bundesliga Player of the Month.