The new graphics cards are built on the AMD RDNA 3 architecture, the world’s first gaming GPU to feature an advanced AMD chiplet design. The breakthrough architecture delivers up to 54% more performance per watt than AMD RDNA 2 architecture and features the worlds fastest interconnect linking the graphics and memory system chiplets at up to 5.3 TB/s. It also offers up to 96 new unified compute units and second-generation AMD Infinity Cache technology. It also includes increased AI throughput that delivers up to 2.7X higher AI performance, and second-generation raytracing technology that provides up to 1.8X higher raytracing architectural performance in select titles versus a graphics card built with AMD RDNA 2 architecture.

The TUF Gaming Radeon RX 7900 XTX is reinforced with durable materials which provide it with a strong structure which also protects the PCB from sagging. It starts with a rigid die-cast frame to which a sturdy backplate and shroud are melded, both made of aluminium. ASUS also included a graphics card holder in the box to keep this graphics card perfectly aligned over time. 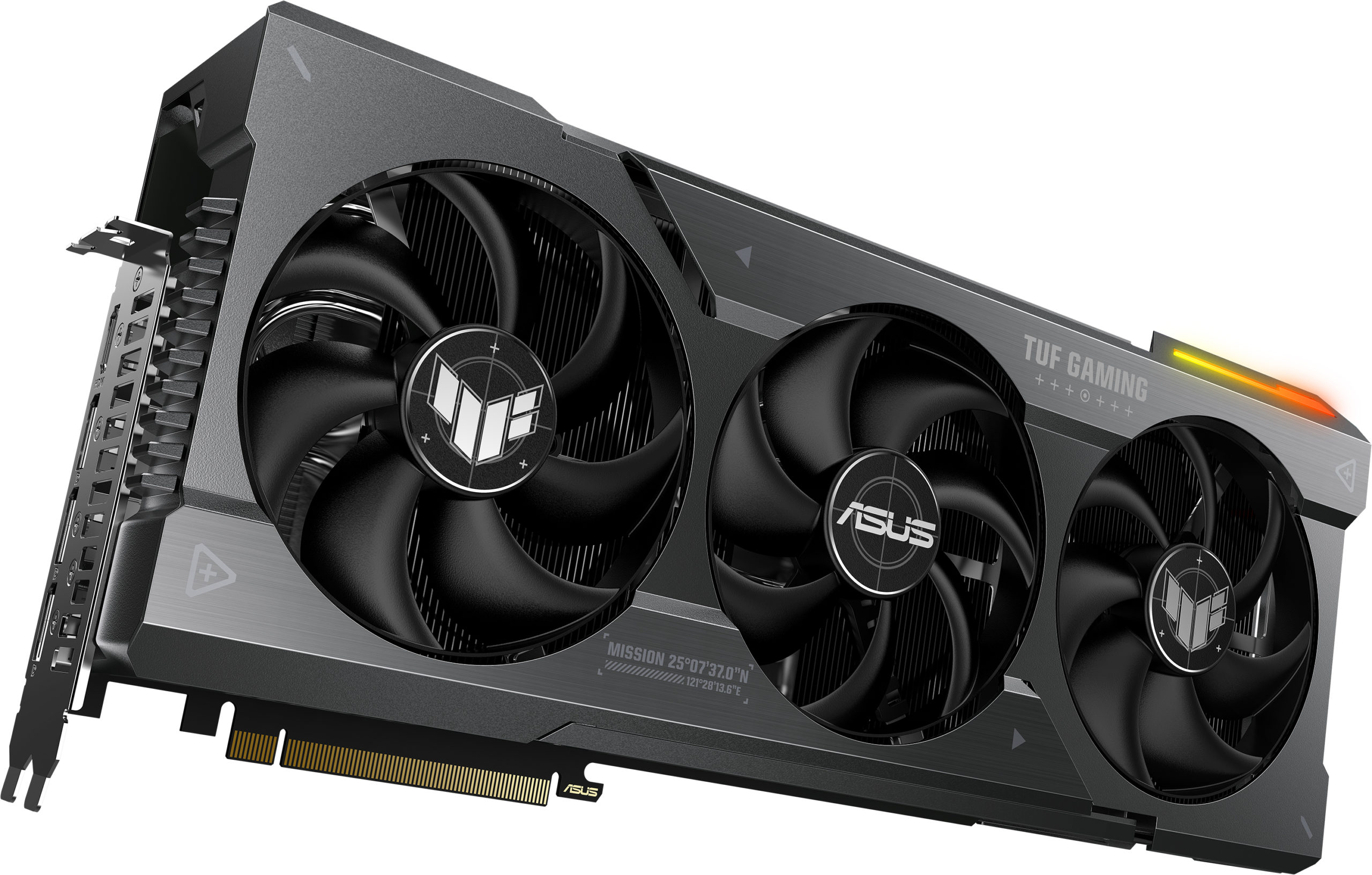 A new cooling design empowers the GPU to run at full throttle. A wider vent on the backplate opens up even more room for airflow. Plus, the total heat dissipation area has been increased by a full 22.8%, and an expanded opening along the edge of the backplate allows even more air to flow through the fins from the Axial-tech fans.

The fans are both larger and more effective for this generation. They provide 13.8% more airflow and 8% more static pressure compared to the last generation, all while spinning at lower RPMs and producing a similarly low amount of noise. A Dual BIOS switch lets users choose between performance and quiet modes, or they can get to manual tweaking with ASUS GPU Tweak III software. 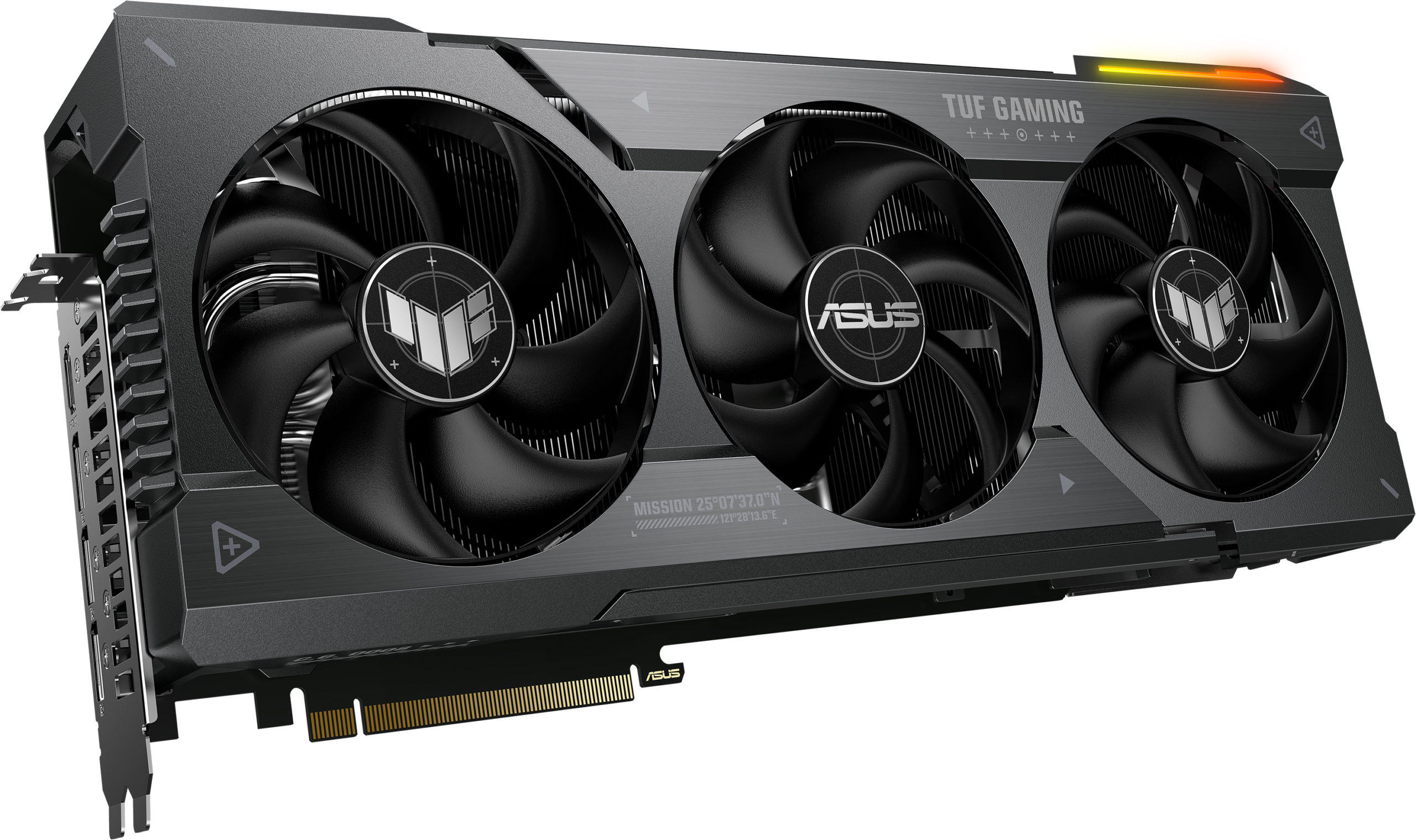 Advanced connectivity lets users reap the advantages of the latest gaming monitors on the market. They will find an HDMI 2.1 port on the TUF Gaming Radeon RX 7900 XTX and a trio of DisplayPort 2.1 ports.

To provide the necessary power, the TUF Gaming Radeon RX 7900 XTX graphics card uses three 8-pin power connectors. This supplies a robust power delivery system featuring 20K-rated capacitors and a spread of high-current power stages arranged in a 17+4 configuration. In addition, the ASUS Auto-Extreme manufacturing process offers robust longevity that lives up to the TUF name, so users can be confident that their top-tier card will power through games for years to come.

The TUF Gaming Radeon RX 7900 XT offers key upgrades over the last-generation Radeon RX 6900 XT graphics card, including a larger 20 GB pool of GDDR6 RAM, 5,376 stream processors, and a wider 320-bit memory interface. Its supporting cast includes many of the same design elements as the TUF Gaming Radeon RX 7900 XTX graphics card. From the die-cast frame, the aluminium shroud and backplate and the 3.63-slot design, to the updated 3D acrylic TUF logo with ARGB lighting on the edge of the shroud, this graphics card features a complete set of the latest ASUS innovations.

Power up PCs with the right PSU 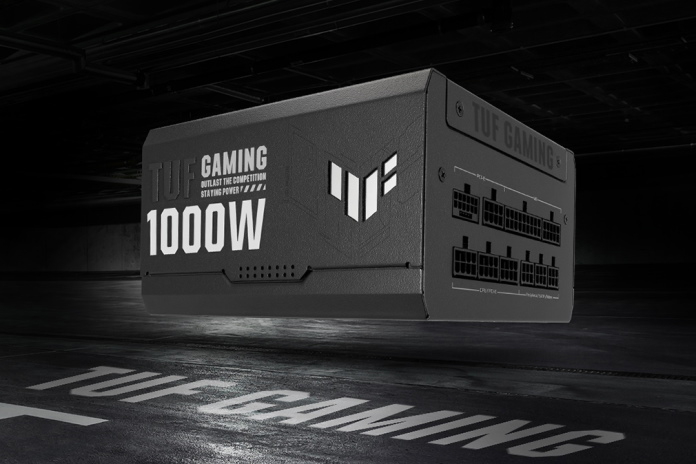