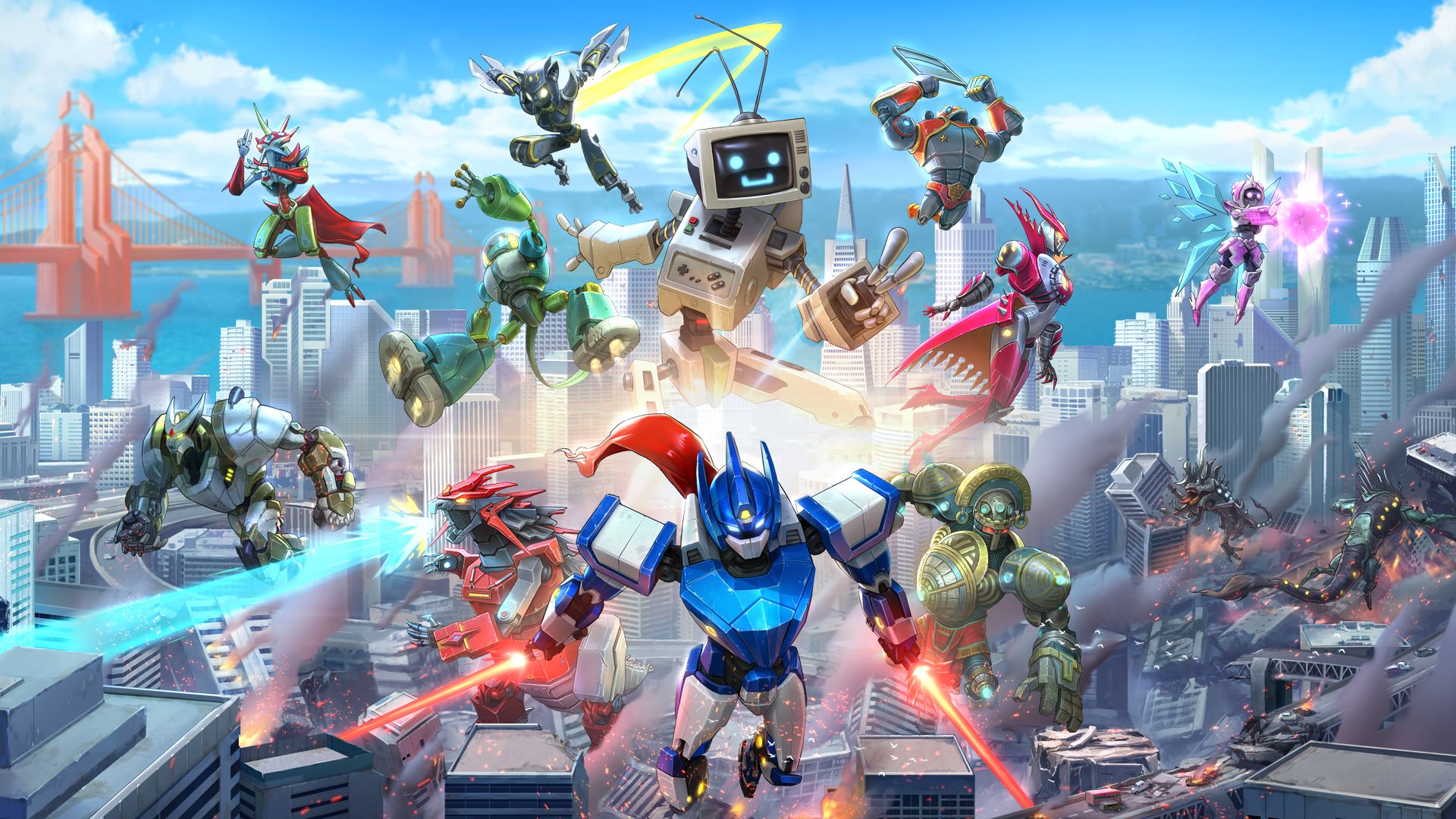 Developed By: The Balance Inc

Override: Mech City Brawl is a 3D mech brawler which take inspirations from games such as SEGA‘s old school Virtual On or Gundam Versus. The game supports up to 4 players in a single match and even a shared-mech pilot controlling.

Gameplay is pretty simple, you destroy your opponents before they destroy you. You get to pick from 12 different mechs each with its own unique look. What makes Override: Mech City Brawl fun are the controls. Each trigger buttons corresponds to an arm or leg. It gets some getting used too but having the ability to string attacks simultaneously has a great feel to it. Each mech will have their own unique moveset and power which you can unleash when you had a bar in your power meter. There is also an Ultimate Attack which you can activate when your health is low to turn the tides of battles.

One of the interesting things in the game is the introduction of shared-mech. This allows 2 to 4 players to share control of a single mech. This made for some weird fun moments while trying to defeat your opponents like Power Rangers. Sadly there is no local versus mode so the only way to play with friends on the couch is using shared-mech.

There are a variety of locations available in the game but they somehow feel all the same. Only 2 or 3 has some obstacles like in Egypt where there is an underground tomb. During battle items like guns and swords can drop down and be picked up. Some items are good and some are useless (like the shields). My favourite is obviously the lightsaber where you can duel blade it.

Completing a match local or online will unlock a customization item which can be a mech skin or an accessory. This helps to let you customize the look of your mech to stand out. There is no microtransaction and all items have to be unlocked by playing the game.

Was it fun while it lasted?

Surprisingly, this game has a story mode and quite a good one at that. You play as a mech pilot who is recruited to help defeat aliens known as Xenotypes. Yes, it is as cliché as it gets with pilot rivalries and boss battles but what happens off battles is what make this story interesting. After the first mission, you have to ability to choose what mission you want to take. The choice you make will determine how you want to upgrade your Mech while going through the story.

The story runs some sort like an XCOM game where after a certain number of days, a story mission will appear to move forward the story. The missions do get repetitive from your regular defeating monster waves to protecting a drill but slowly upgrading your mech feels like a great reward. Sadly, just when you are about to enjoy the story mode, it all abruptly ends before you know it. After defeating the final boss, there is no way to continue upgrading your mech since the savegame loops you back before the final battle. Thus, there is no way to fully unlock and upgrade your mech anymore. What is even more baffling is that there is only one savegame slot. This means you have to delete all your progress to play the story again with another mech. I can confirm that each mech has a different pilot background story but having to delete your progress everytime seems counterproductive.

I believe this is one of Override: Mech City Brawl’s strongest points. The online multiplayer is smooth and exciting. Playing 1 vs 1 with another person online gets your heart pumping at times while you trade blows. The gameplay is smooth with little to no lag even when it showed that my opponent and I had only 2 out of 4 network bars. The online comes with 3 modes which are Rank, 1 vs 1, and free for all. Rank is where you will meet some good players that execute nice combos. It might take a while to find a game (longest I had to wait is like 10 minutes) but it is worth it. If you want to have more fun you can try the 1 versus 1 or Free-For-All modes.

Sadly as stated above, there is no 4 player local versus so the only thing you have is fighting the AI. The AI will provide some challenge for you to practice but nothing beats fighting with another person. Also, take note that there is no way to upgrade your mech outside of story mode so there won’t be any unintended balance issues.

What Can Be Improved

Override: Mech City Brawl is a good game at its core. With no microtransactions and a ton of customization, it was fun to play. The Story Mode had all the potential but sadly it fell short (literally ending too soon) before then fun begun. Online Mode is one of the best I ever had needing you to outplay your opponent like any other fighting game. Honestly, for a half-price game at $29.90 (125.43 MYR), the game is considered good. I hope that the developers patch the Story Mode and added more stuff into the game in the future.

Override: Mech City Brawl is ready to throw the first punch this December