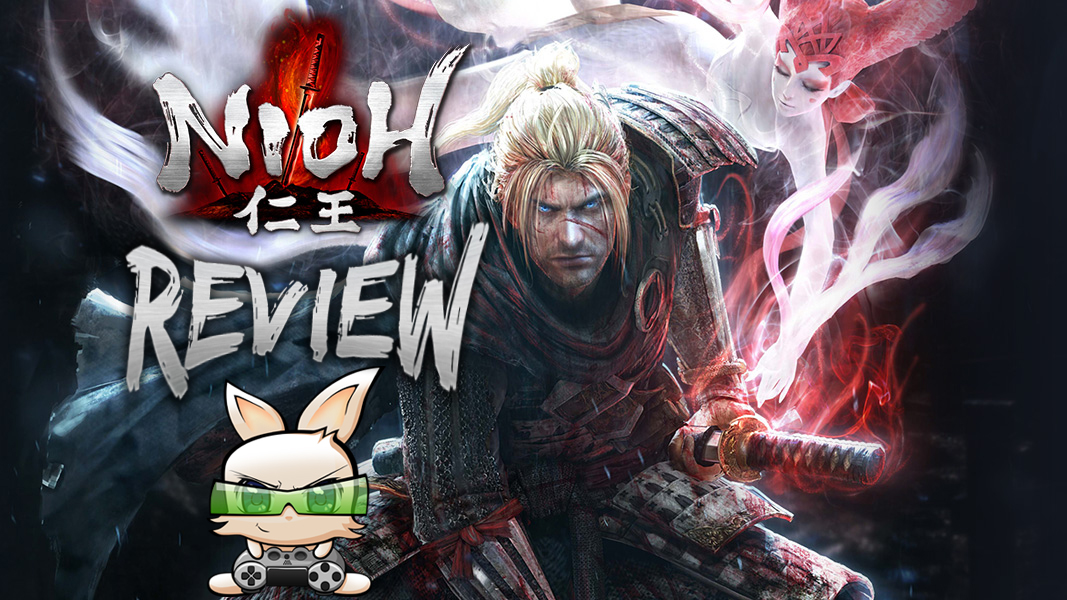 Oni, was a game first announced back in E3 2005. 10 years later, a new trailer was release on TGS 2015 Sony Conference and its was renamed to Nioh as a PlayStation 4 exclusive.

The story of Nioh is set in a fictionalised dark fantasy of the Sengoku period during the year 1600 which was the heading to the famous event “Battle of Sekigahara”.

Nioh is an action RPG game, the fighting base is Hack and Slash similar to the Souls games, Bloodborne and Omnimusha. In where Nioh stands out is the mechanics are more technical compare to a Souls game as Nioh has 3 stances; High, Mid and Low stance. 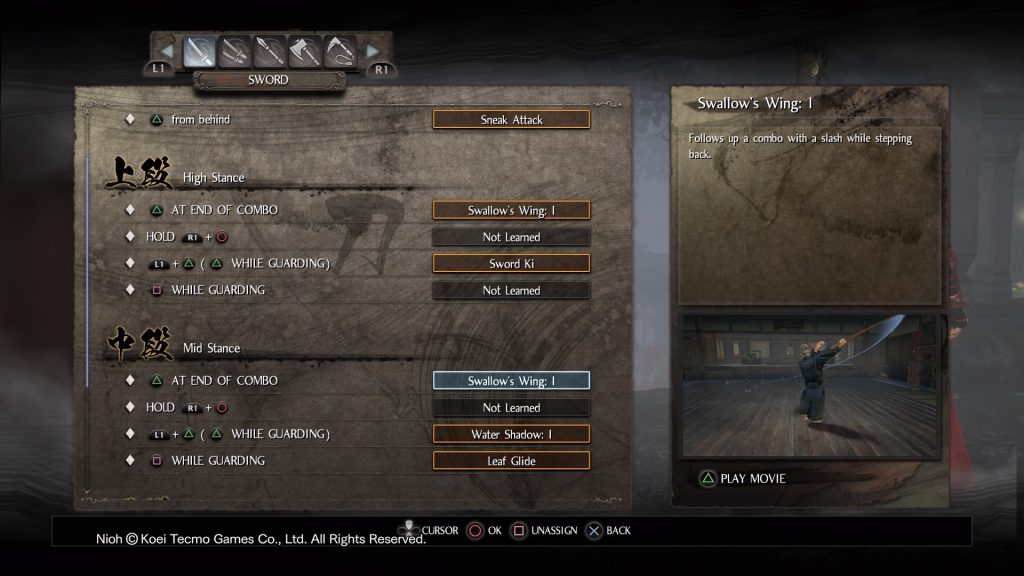 Each stance has a different movesets and combo finishers which can be customized depending on which weapon the player equips or the finishers the player selects.

Each stance requires different amount of KI aka Stamina Bar when executing a Combo Attack. KI also depletes with you guard against attacks. When your KI is depleted, you are left open to be attacked by enemy but there is a way to replenish KI quickly.

After every action set, a small white circle will appear around your character. By pressing R1 when your stamina bar is white with white particles around you, it will replenish the stamina you just use. This is call KI Pulse, one of the vital mechanic in Nioh and can be a crucial in deciding a battle outcome. 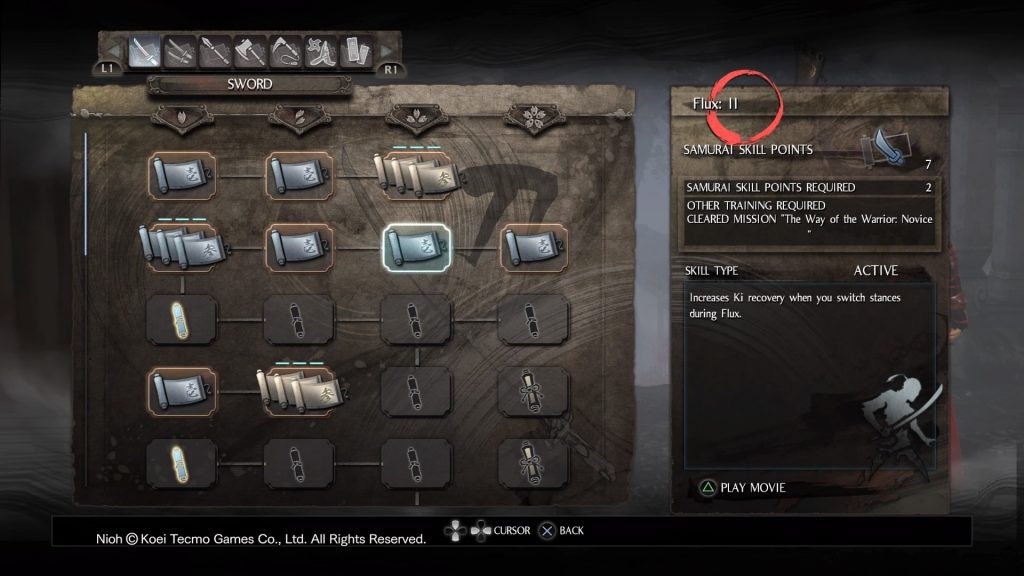 Learn Skill Menu
Each skill was well explain and they even include movie to show what is the skill move are for player to watch and decide to learn.

Guardian Spirit are obtainable throughout the game. They provide players with certain passive benefits like increase damage, defence, reduce cooldown. They also protect a player’s Amitra which is the game experience points, when you die.

When guardian spirit meter is full, you can summon them and they become your Living Weapon, your Health and Ki gauge will become Living Weapon Gauge. As long as the gauge is active, you can deliver continues attack combo on enemy but take note that getting hit will deplete the gauge. Once the gauge is depleted the effect wear off. 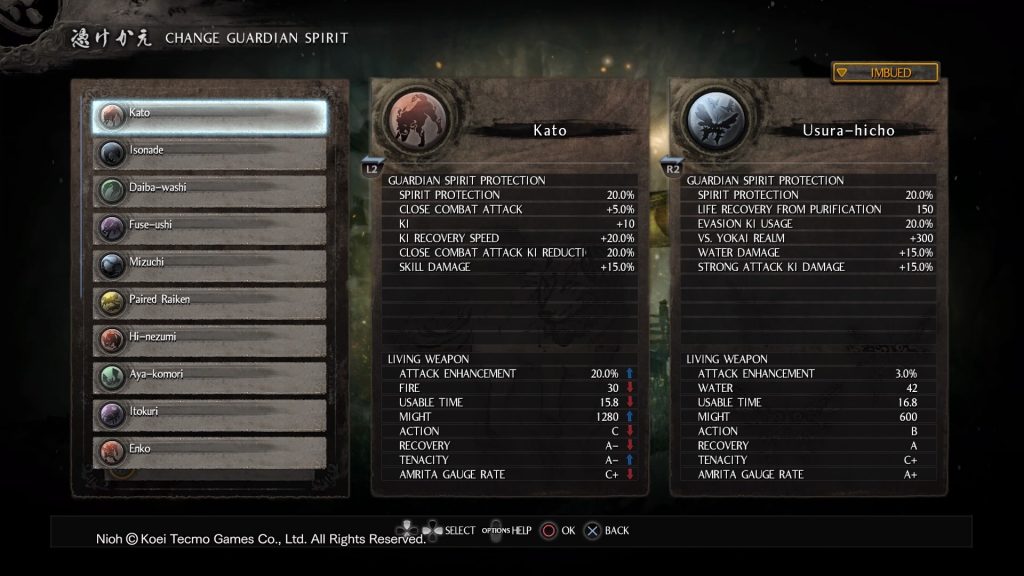 List of Guardian Spirit, each spirit give players different stat and bonus.

Shrines, which are scattered around the world act as a checkpoint for the player. Shrines also lets you level up and customize your character by changing gurdians, making offerings, receiving Kodama blessings and jutsu.

Main Story is the progression of mission which tell the story of the game protagonist William as he journeys to Japan to rescue the Guardian Spirit which has been captured.

Sub Mission are optional missions which can be completed to gain experience or items like gold, weapon, armour, or consumables. In this mode, you can fight against the bosses alone or fight alongside NPCs to complete the mission. 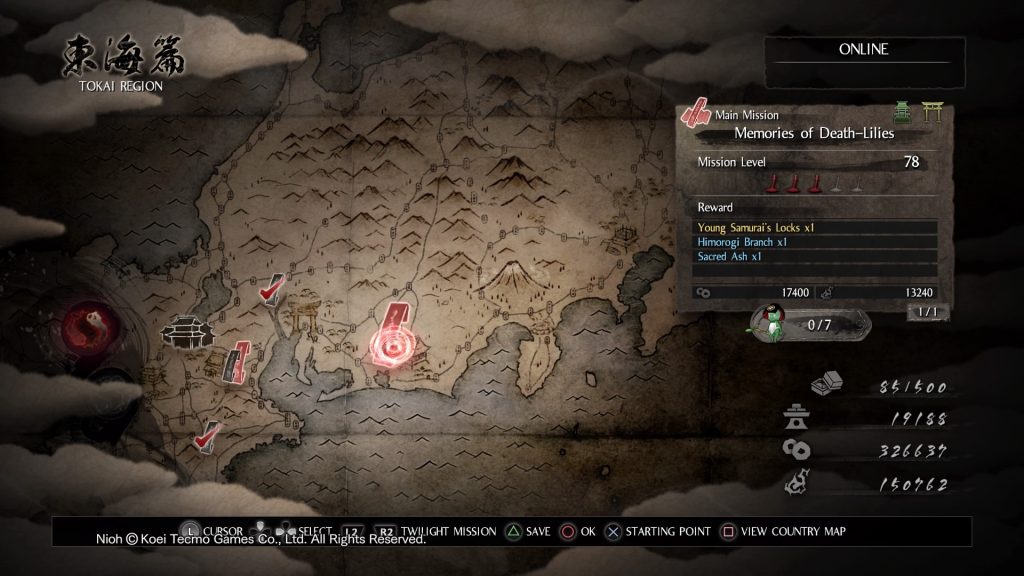 Visually, Nioh gives you the Option to choose between two modes. Action Mode and Movie Mode.

In Action Mode, Team Ninja downgrades the visual for a smoother frame rate. This downgrade is notable on some environment and character model which look pixelated. The snow, rain and mist are not effected and look good while able to maintain a steady framerate while killing demons/samurais. There is one time the game suffered a drop in frame rate even in Action Mode and that is when I was trying to kill a demon surrounded by lots of objects in The Defiled Castle Mission which had a lot of animation happening at the same time.

In Movie Mode, the framerate is set at 30 fps, this allows the visual to have details and not pixelated compared to Action Mode. For my play through, personally I used Action Mode over Movie Mode for fluid action and faster framerate.

Overall, Nioh could take hours to complete if you fully explore each and every level. Bosses are challenging, and full of personality. Each boss battle usually has a second phase which makes battles less of a rinse and repeat battle. These can range from changing their attack pattern, combo and attack. 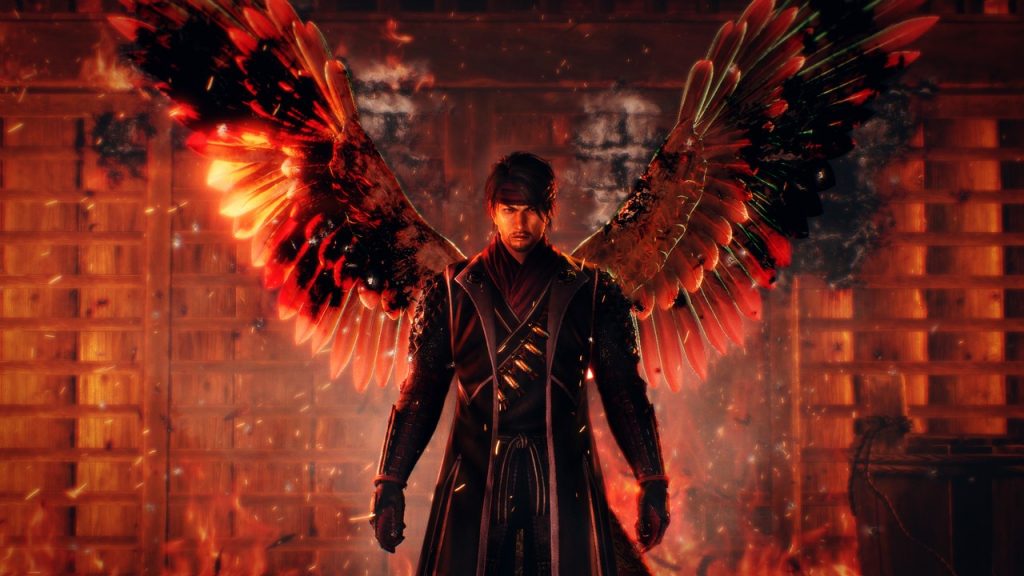 Saika Magoichi one of the bosses players must face in Nioh, do remind me of One Winged Angel from FF7

The level environment is well design to make exploration fun and enjoyable. Traps like boulders and ambushes are laid out throughout the mission and may get you if you are not caution while searching for the cute kodama which give players blessing. 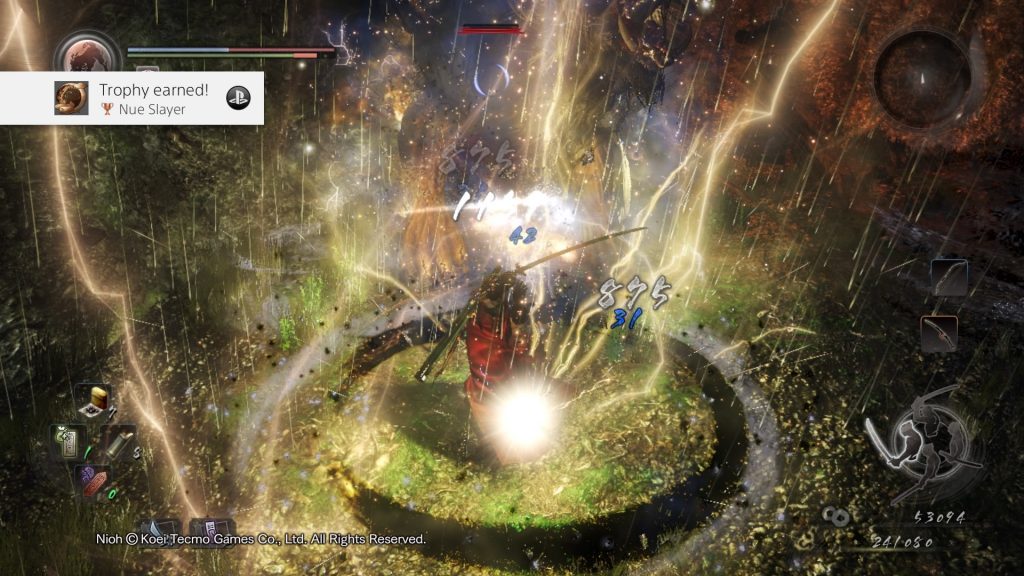 Controls in this game feels good as it does not require any special combination button to execute a combo attack or any finishing move just a simple button mashing, but it can be hard if you learn advance moves like parrying which requires a perfect timing to execute.

The Graphic were nicely made especially in the mist where your vision is limited, some placed like when you venture into a cave where it will turn darker, the moon light reflection on water, water splashing, rain/snow effect. Only downside is some environmental and character models looks a little pixelated. 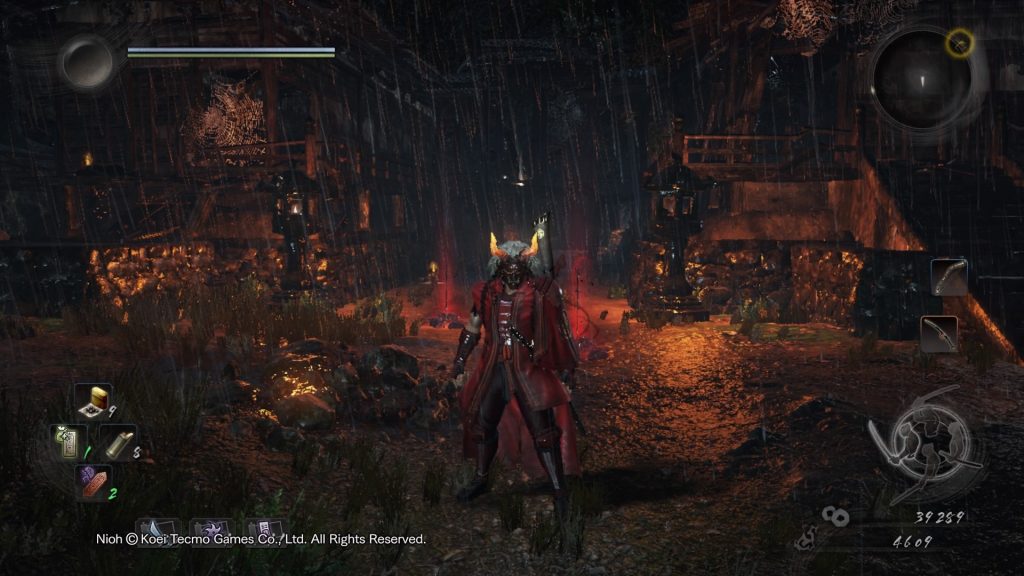 Rain Weather Effect in the village, the graphic bit of pixels

Sound effect is nicely done especially in the rain as I notice when I was in first person view aiming with a bow/rifle the rain hitting the shoulder of your character can be hear, when back to third person the rain sound would focus back to the surrounding area. The sound effects of water flowing around and fire were also nicely done. (By the way I used a headseat lol)

Matchmaking Multiplayer for Nioh is good as there was options to either play with random people or with friends. It was easy to setup and didn’t provide any problems.

Difficulty of this game is different compared to last 3 Beta released. It is much easier than the beta. When playing the first Nioh beta it was really difficult and quite similar to Dark Souls 3, but after listening to the feedback from players, they decided to reduce the difficulty and implement on New Game+ and future DLC for those who enjoy the challenge. 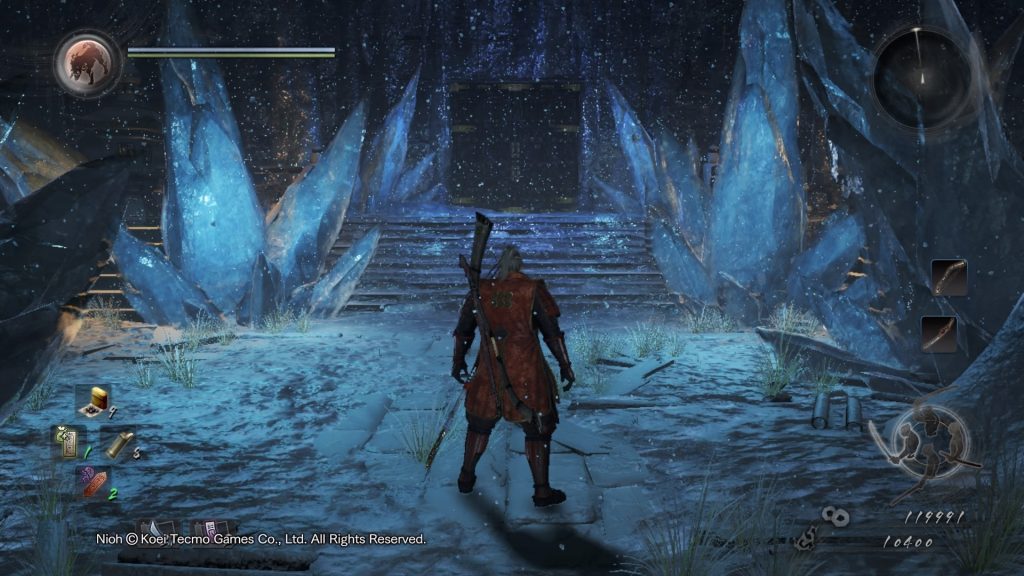 For those players that love Souls games, Bloodborne or Omnimusha, Nioh is a one of those games that will satisfy the hack and slash craving in you. It is a must buy game for the year 2017.