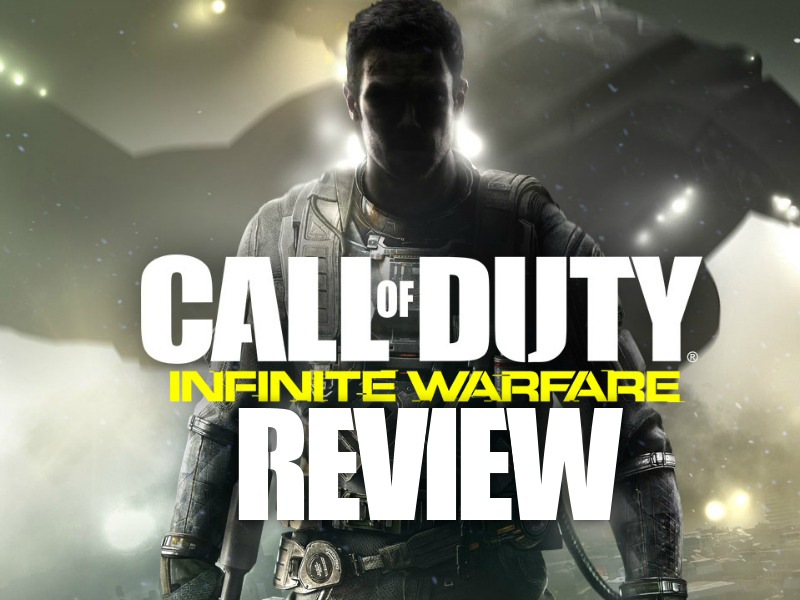 -Available for PS4, Xbox One, and PC
-Reviewed on PS4 Taking off from the trenches of World-war II to our present Warfares, Call of Duty: Infinite Warfare takes a new spin in its newest game and brings the warfare all the way up to space. The promise was high and it was almost fulfilled. Almost being the key word here. The game was great, It has all the abilities to hook the player and take us with itself to another world. The game is divided into 3 modes, Single Player, Multiplayer (Which consists of PvP and unfortunately there is no co-op mission modes this time) and Zombie Mode.

Single player follows a protagonist on his quest to lead the story of a successful Soldier Nick Reyes, with a sharp wit and bright future ahead. During an attack, the previous Captain is shot to death, and Nick has his world turn upside down when he is the one burdened with the care of the whole ship and also with new challenges of the political inter-solar world. It is one roller coaster ride, in the mad-dash for survival and at the same time making his ship thrive. This story provides a touching emotional journey of a protagonist we feel like cheering and rooting for. The story campaign for Infinite Warfare is arguably the one of the best in the series.

Time To Kill (TKK) is slower than it used to be due to the addition of mini-boss fights that has added a new flavor to the game. They require instant decisions and provide a fast-paced thrill. Gone are the days of Call of duty when the whole campaign was about corridor shooting, this newer addition has changed that and suits the gamers of this franchise’s needs perfectly. Another strong point is deeper POV experience. We don’t see head-hopping to other characters over the fly. Instead, a single main protagonist remains throughout. This provides a better experience and a deeper connection with the protagonist. Previous games had lacked that connection of the character with the player, making them less attached.

You can explore your ship more and get a breather after each main-quest. The addition side-missions have made this game less restricting than the previous ones has been. The player also gets to go on side missions to earn upgrades for his ship, soldier or weapons which help with your main quest. These things add more depth to the next mission and the overall gaming experience. Weapon balance in multiplayer is shaky at best. It used to be well-balanced in previous games, but this time around you can easily craft an overpowered weapon which puts new players at a great disadvantage. The game would be better off if it stuck to the previous generation game (Black Ops 3) in which if you were given a rate of fire upgrade, it would take stability away to balance out the weapons. Instead, this time around you can easily get an ultra-stable gun on top of that you can equip a grip to make it even more accurate. The character customization is still great, you are given 10 points to choose which add-ons you would like to get and you have a choice to sacrifice secondary weapons or equipment to add more attachments to your weapon or choose secondary perks. There is still a lot of ways to customize your soldiers and profile, and lots of fun maps like Throwback with its Happy Days vibes, or Mayday, which feels more like Destiny than traditional Call of Duty.

One of the most impressive elements of Call of Duty: Infinite Warfare’s multiplayer at this point is the number of modes. There are lots of varied playlists to keep you busy, and supply drops unlock regularly with new cosmetic items, gestures or weapons.

The Combat Riggs system is pretty interesting and fun, which is a lot like the Specialist system on Black Ops 3. A lot of the maps are small quarters this time and provides really great use of close quarter combat experience. Games are slightly slower paced compared to Black Ops 3 used to be. This actually is a good thing since the game needed to slow down a little.

The multiplayer portion of the game somehow feels like it focused solely on the hardcore Call of Duty gamers and tried to provide them with a memorable experience, but may also cause new players in this series to feel left out if they do not understand certain mechanics of the game.

In the end, the exciting campaign, fun yet traditional multiplayer, and a whole new zombies experience makes it a great addition to the Call of Duty franchise.