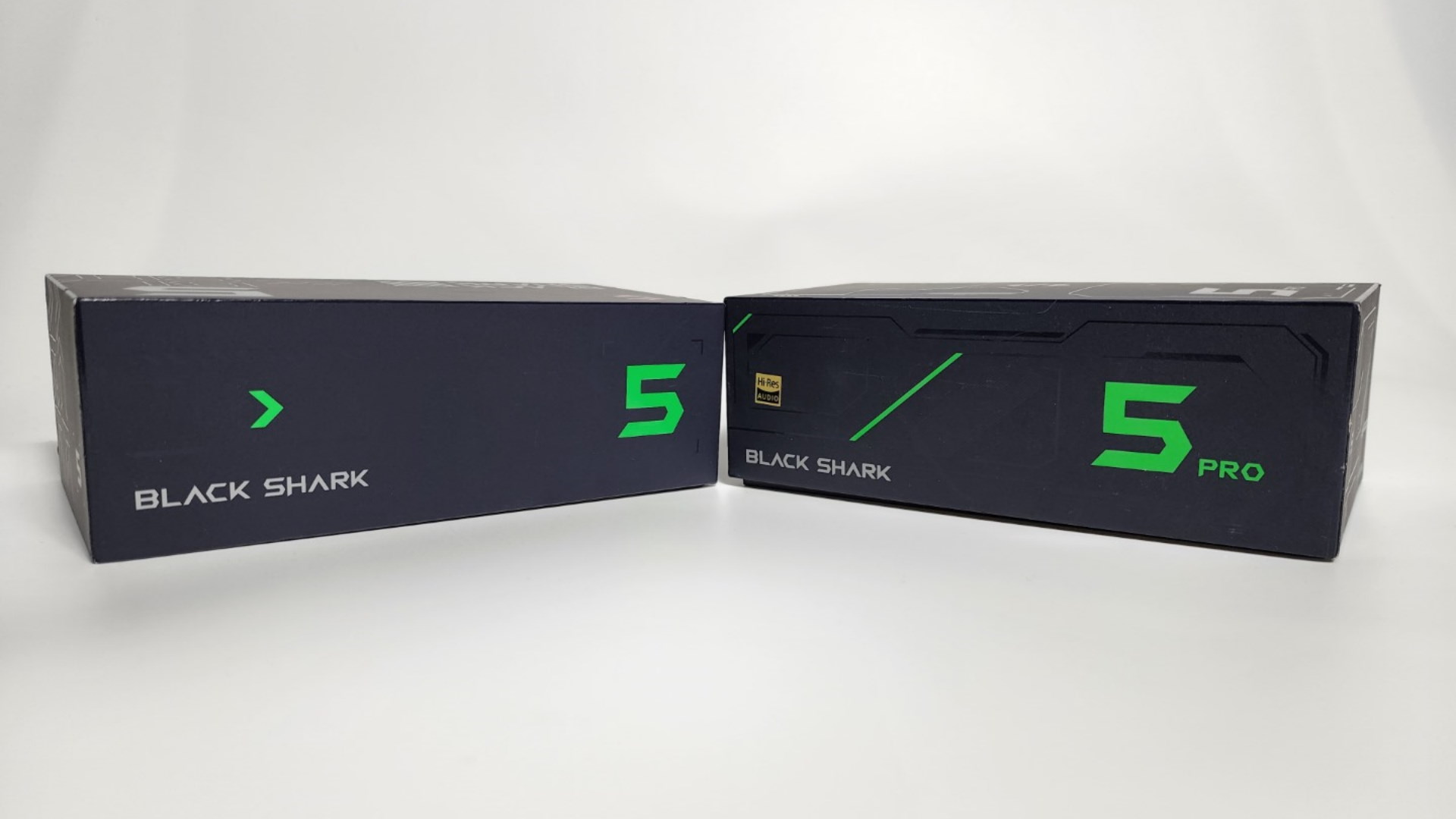 Black Shark 5 vs 5 Pro – Which One Should You Get

No doubt, most of you seeking a Black Shark phone do so for its prowess in performance and gaming capabilities but ultimately, which is the better phone for you depends squarely on 2 factors – What level of users are you? And how much are you willing to spend for the extra juice?

Here’s a breakdown of how the two phones compare and which one you should get.

When it comes to design, I’ll be honest with you – It is hard to tell them apart. Both the Black Shark 5 and its beefier bro are almost identical in weight and dimension. Weight-wise, the 5 Pro is only 2g heavier than its sibling and is only larger by a margin lesser than 1mm in dimension. This isn’t one of those models where one stood out in terms of height or thickness so if you are thinking to get either one, just focus on their specs and what you plan to use it for.


They are easier to tell apart once you turn them around. The standard Black Shark 5 has a glossy rear panel that obviously needs effort in regularly wiping fingerprints off, whereas the Black Shark 5 Pro has a matte surface that spares you from that problem. The 5 Pro also has a bit more style and pattern to its body that distinguishes it from its standard brother. In terms of slots and points, both have a single USB-C 2.0 charging point, DualSim ready, no memory card slot, and no headphone jacks.

The pricing point is where their differences really show. The standard Black Shark 5 starts from RM 2,299 for the 8GB/128GB variant, capping at RM 2,699 for the 12GB/256 type. If you are thinking about getting this mode, we recommend going for the 12GB/256 one because that extra room in storage and 50% more RAM will simply last you longer.

Funnily, the Black Shark 5 has an advantage here in visual quality thanks to its AMOLED panel running on 144Hz and up to 1300 nits peak. The contrast and colours are simply amazing be it for gaming or watching something.

However, that isn’t to say the Black Shark 5 Pro pales much in comparison because media and games still look decent here on its OLED screen running on 144Hz and HDR10+. You’d have to lay both phones side by side to notice the advantage the AMOLED screen has over OLED. Colours are also not as vivid on the 5 Pro, but if you just want a smooth and stutter-free screen for everyday use and gaming, its 144Hz will get your back just right.

Both phones have a screen size of 6.67 inches but the Black Shark 5 have a slight edge over its Pro sibling in having an 85.9% screen-to-body ratio, compared to the Pro’s 85.7%. On the naked eye, the advantage is honestly negligible. Resolution-wise, both show up to 1080×2400 pixels with 395 DPI at a 20:9 ratio as well as having an always-on display.

Armed with an SM8450 Snapdragon 8 Gen 1 (4nm) chipset, the 5 Pro is ready for any modern-day challenges you can throw at it (for a mobile phone). Not only is the SD 8 Gen 1 at least 20% faster than the older SD 888, but we are now comparing it to an even older SD 870 that the Black Shark 5 carries. This is not to say SD 870 is rubbish, the chipset is still a mighty foe worthy of respect but there’s simply no fair fight here.

Black Shark phones are meant for gaming and so, this is the department where the phone shines over its peers in the market. But as much as the 5 Pro has an advantage over the standard Black Shark 5 in terms of hardware on paper, one element continues to plague gaming phones carrying the 8 Gen 1 chipset, that is these phones are extremely prone to heating up and it can get very hot.

This is probably why Black Shark has released their own Cooler devices to be used with the Black Shark phones. The latest of such cooler device is the Fun Cooler 3 Pro that’s designed to bring down temperatures by an impressive 30 degrees Celcius and yes, you are going to need it if you are serious about getting a Black Shark 5 Pro. The SD 870 on the Black Shark 5 still heats up but not as bad but then again, it is also not as powerful.

Both phones handle games with extreme ease on high settings although the advantage goes to the 5 Pro for a quicker loading time and smoother frames. The 5 Pro, especially, was designed to take on any hits games in the market could throw at it, but as I said earlier, it comes at the cost of your phone heating up. So, are you a gamer who insists on playing games on their highest settings? Or will lower settings be enough to please you? Your answer here will help in deciding which phone you should get.

Both phones come with pop-up gaming triggers that act as the R1 and L1 buttons for those of you on the PlayStation console, or L and R buttons if you’re on Nintendo. The triggers can be popped up or hidden at will and are useful if you really want that competitive edge and more screen room. It took me a while to get used to them but once I did, they became an element I sorely miss when I switch to other phones. The triggers also serve as a camera shutter button which is super convenient if taking a shot in landscape view and you don’t want to move your thumb up to the on-screen button.

Again, the Black Shark 5 and 5 Pro are both designed and marketed as gaming phones. As such, no one should really expect wonderful camera packages that Lifestyle-oriented phones enjoy. This is not to say the Black Shark 5s cannot take good photos because they can, but you just need to manage your expectations.

Both phones do not come with a telephoto lens so you can kiss any intention or ambition to take ranged shots goodbye, and look for another phone that can do that if that’s a function you’ll miss. I am also puzzled by the 5 Pro’s lack of 8K recording capabilities despite the phone being equipped with a chipset that’s capable of doing that.

At the right distance and under the right light condition, you can still take some meaningful and memorable shots with these two phones, especially the Black Shark 5 Pro. In terms of Selfie Cameras, both of them are identical but the main camera is where one of them outshines the other. The 5 Pro is armed with a 108MP camera that promises more detail and attention to textures, whereas the standard Black Shark 5 only has a 64MP camera.

The 5 Pro definitely has a stronger camera and will win any side-by-side comparison but it is worth noting that although the difference sounded big on paper, photo qualities look more or less the same in reality when you’re just judging them with your eyes. The Black Shark 5’s AMOLED screen also plays a role in showing off those beautiful colours and making use of its infinite contrast capabilities compared to the 5 Pro’s OLED. So while it has a weaker camera, its display can sometimes compensate for the difference.

Auto Mode night photography on both phones is doable but good results can only be obtained via Pro Mode. So some tweaking and effort are needed here if you want darker elements to stay dark instead of forcefully illuminated by the AI introducing more lights to your photos.

The Black Shark 5 phones, especially the 5 Pro mode, consume battery like a thirsty fellow stranded in a desert. This is unsurprising considering their nature as a gaming phone, more so when the 5 Pro is running on the 8 Gen 1 chipset.

They both have the same battery size of 4,650mAh, which is just disappointing considering the current market trend is 5,000mAh. But even with the additional 350mAh amount of battery, I doubt it’ll be adequate to satisfy considering how quickly they drain. This battery size can barely last a standard lifestyle phone let alone a gaming phone such as the Black Shark 5s. Gaming on the 5 Pro, especially, would burn through the battery even faster which can be annoying.

But thankfully, as quickly as the phone loses battery, it gets them back even faster. Both Black Shark 5 and 5 Pro uses 120W charging which is nuts. So, if you’re running on fumes, all it needs is just 15 decent minutes to fully charge again. And if you’re really short on time, a good 5 minutes charge is decent enough to get you 33% which is both reliable and convenient.

Both phones are great in their own right and are aimed at people with different levels of need and, of course, budgets. So, which one should you get?

Get the Black Shark 5 if;

Get the Black Shark 5 Pro if;