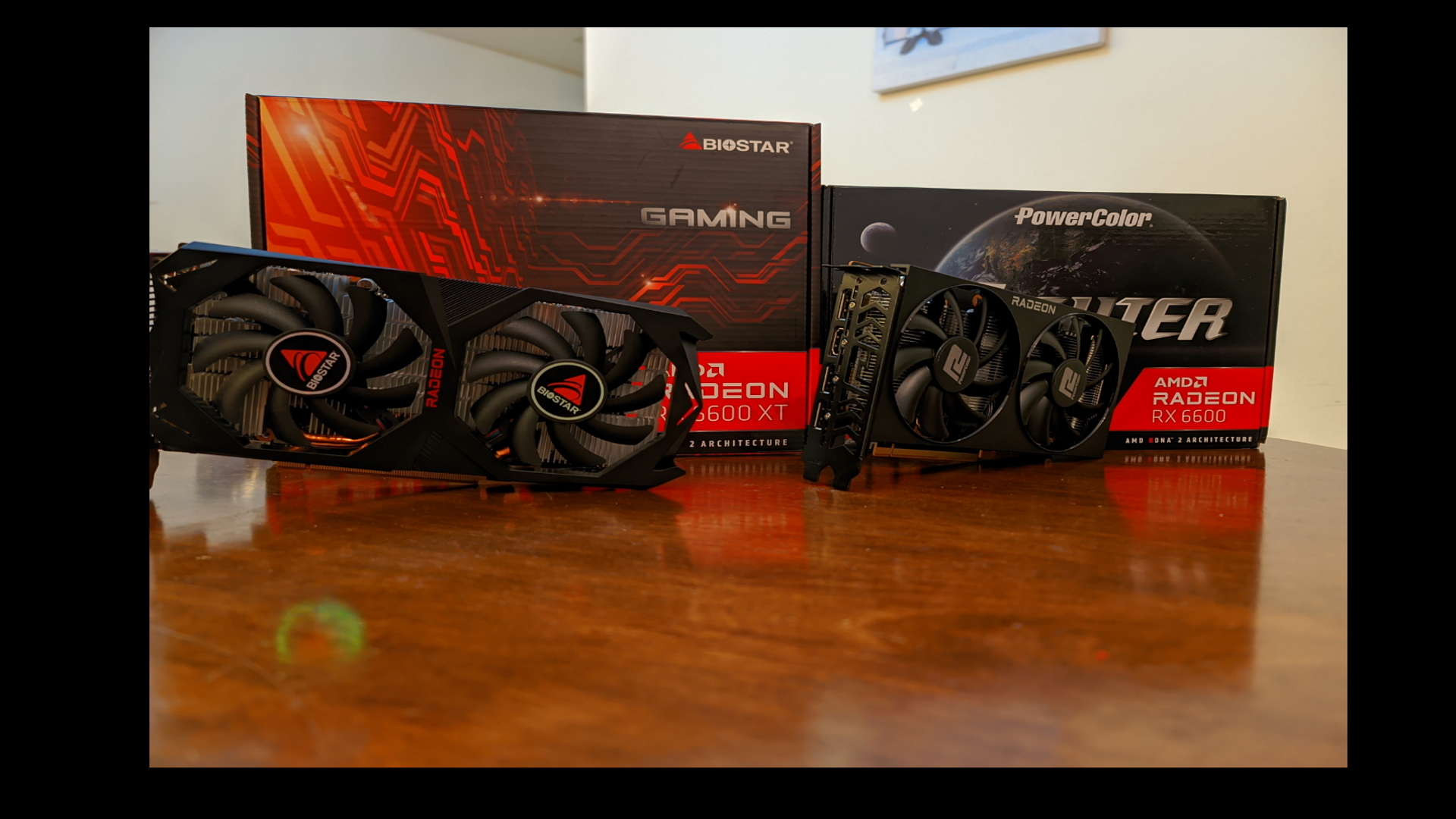 The GPU scene around the world still seems to be in a spiral of madness for the past 1 to 2 years. Prices are all over the place, stocks are always very scarce and the value of 2nd hand GPU’s have shot up tremendously. For an up-and-coming gamer in 2021/2022, it’s no surprise that they possibly will not get a GPU for their rig seeing how stocks are usually low, and even if they did, they would have to fork out such a premium for what once sold at the fraction of its price.

NVIDIA and AMD have been duking it out when it comes to pushing the boundaries of what a GPU is capable of doing. With many of their higher-end GPU’s making 4K gaming on triple-A titles very possible without the GPU’s breaking a sweat, it’ll be fun for those who can afford such cards. Thankfully, AMD has stepped up and introduced their mid-tier, 1080p cards, the RX 6600 and the RX 6600 XT. 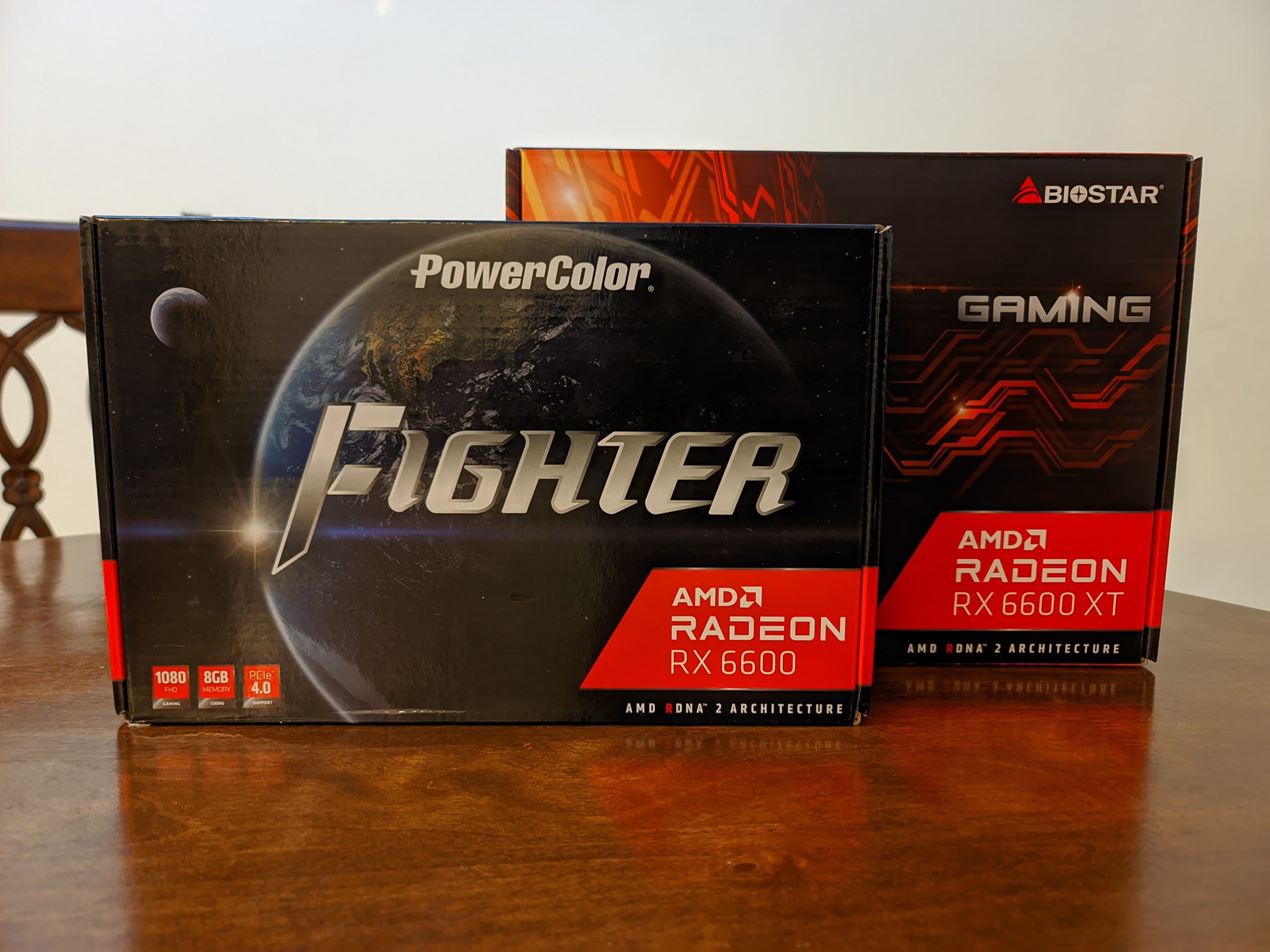 Built upon the same architecture, both the cards sport the same amount of VRAM and bus width, with changes in the clock speeds and memory bandwidth between them. Aimed at being the go-to 1080p cards, it’s a little confusing having both these two cards on the table, as you wonder which one would suit you best. Tech specs-wise, the numbers are looking pretty similar, as we take a look at the chart below: 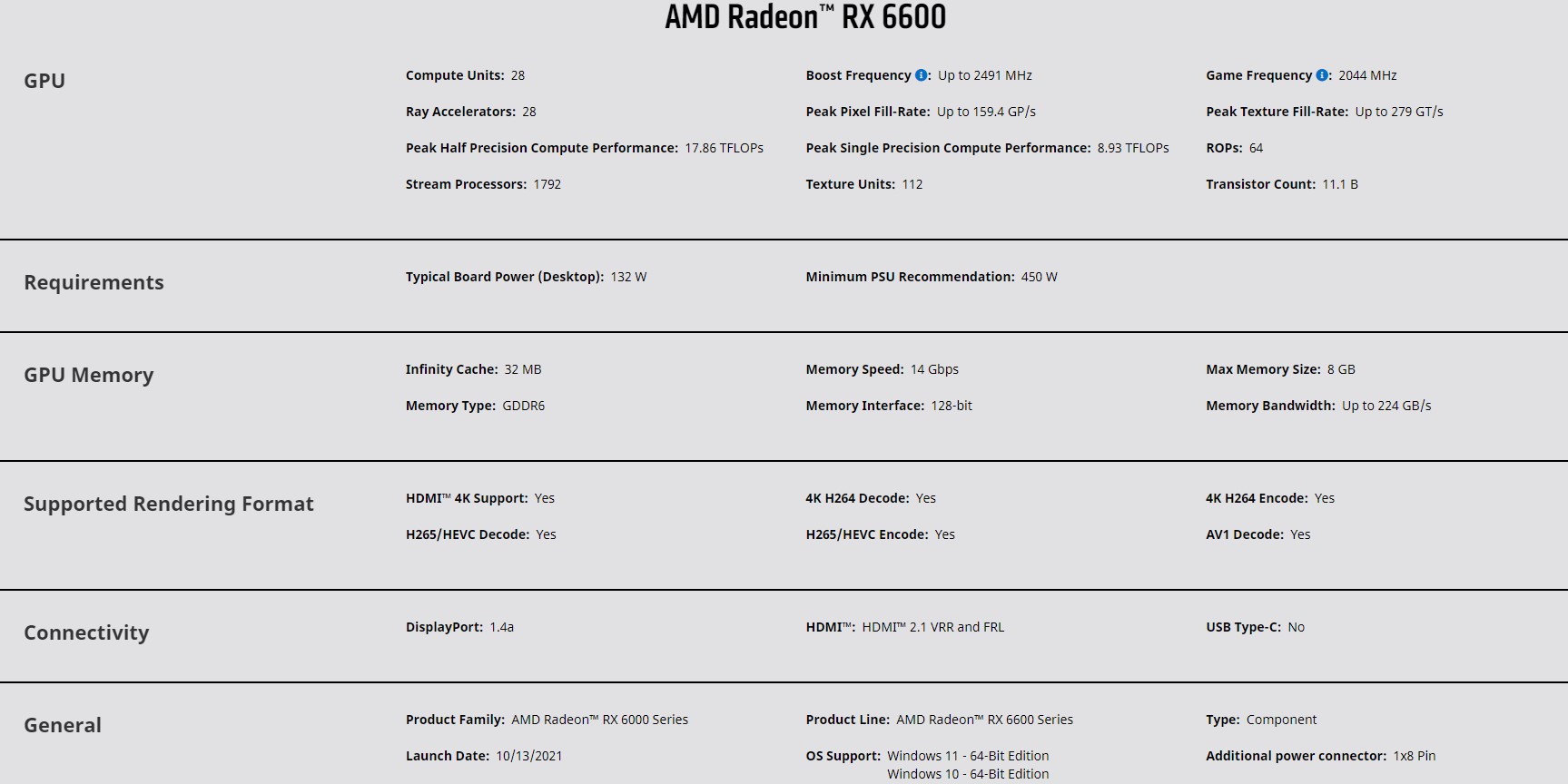 Cut From The Same Cloth

The RX 6600 and the 6600 XT sit in the low to mid-tier card hierarchy within the AMD family. The two cards are aimed at gaming enthusiasts looking to game perfectly in 1080p and indulge in the occasional 1440p without breaking the bank. But as we all know, the market price for a GPU nowadays is still uncertain and getting them at MSRP is close to impossible. Realistically, the RX 6600 will start at RM2200 (specifically the PowerColor brand) whereas the RX 6600 XT will start at around RM2800 depending on the brand. Prices would differ between manufacturers as some GPU’s would come stock with different sets of cooling capabilities etc.

AMD possibly decided to release the RX 6600 to meet demands around the world for a more affordable 1080p card as we saw a decline in stocks for many of the XT cards out there (both the 5000 series and 6000 series). 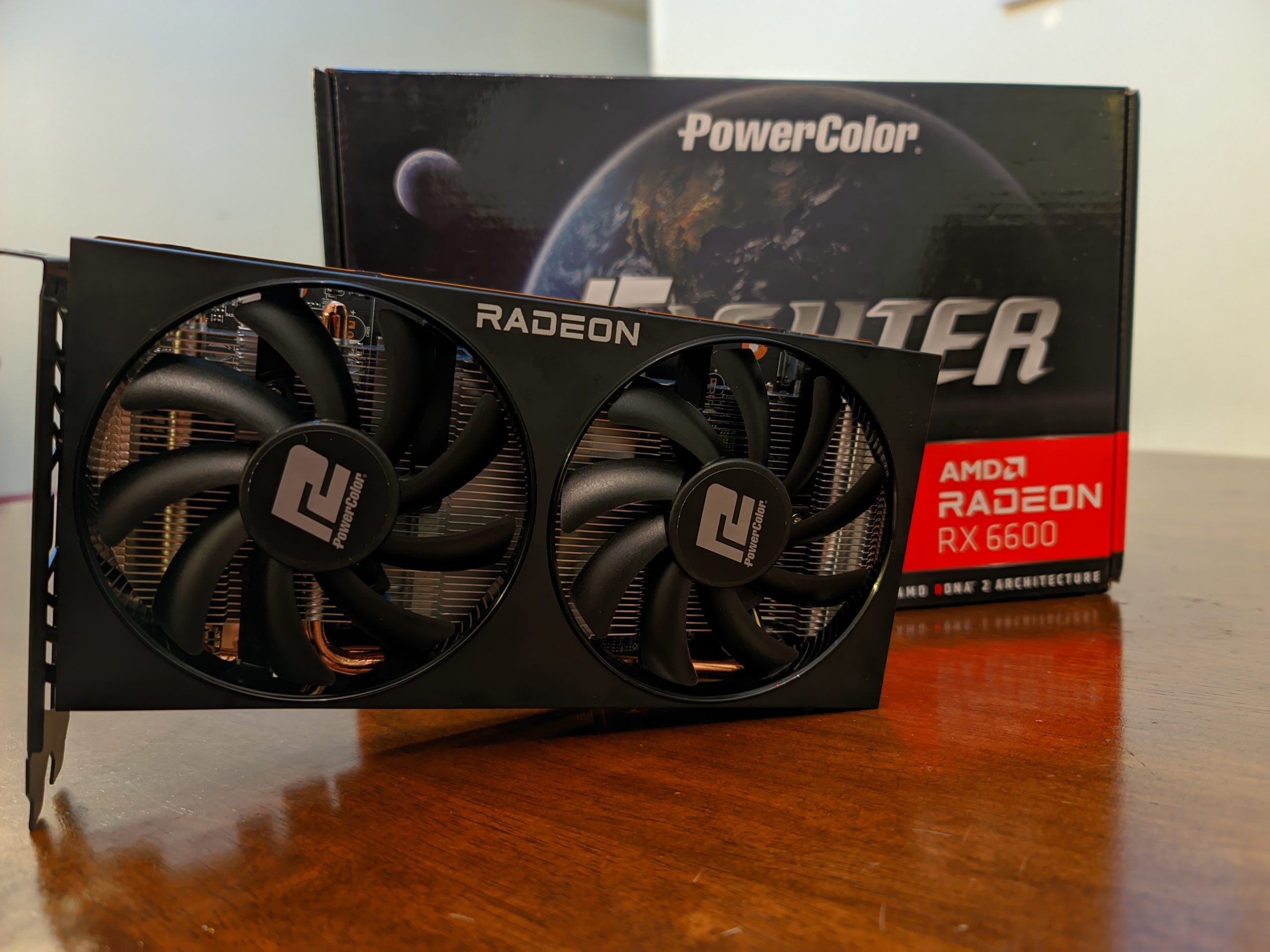 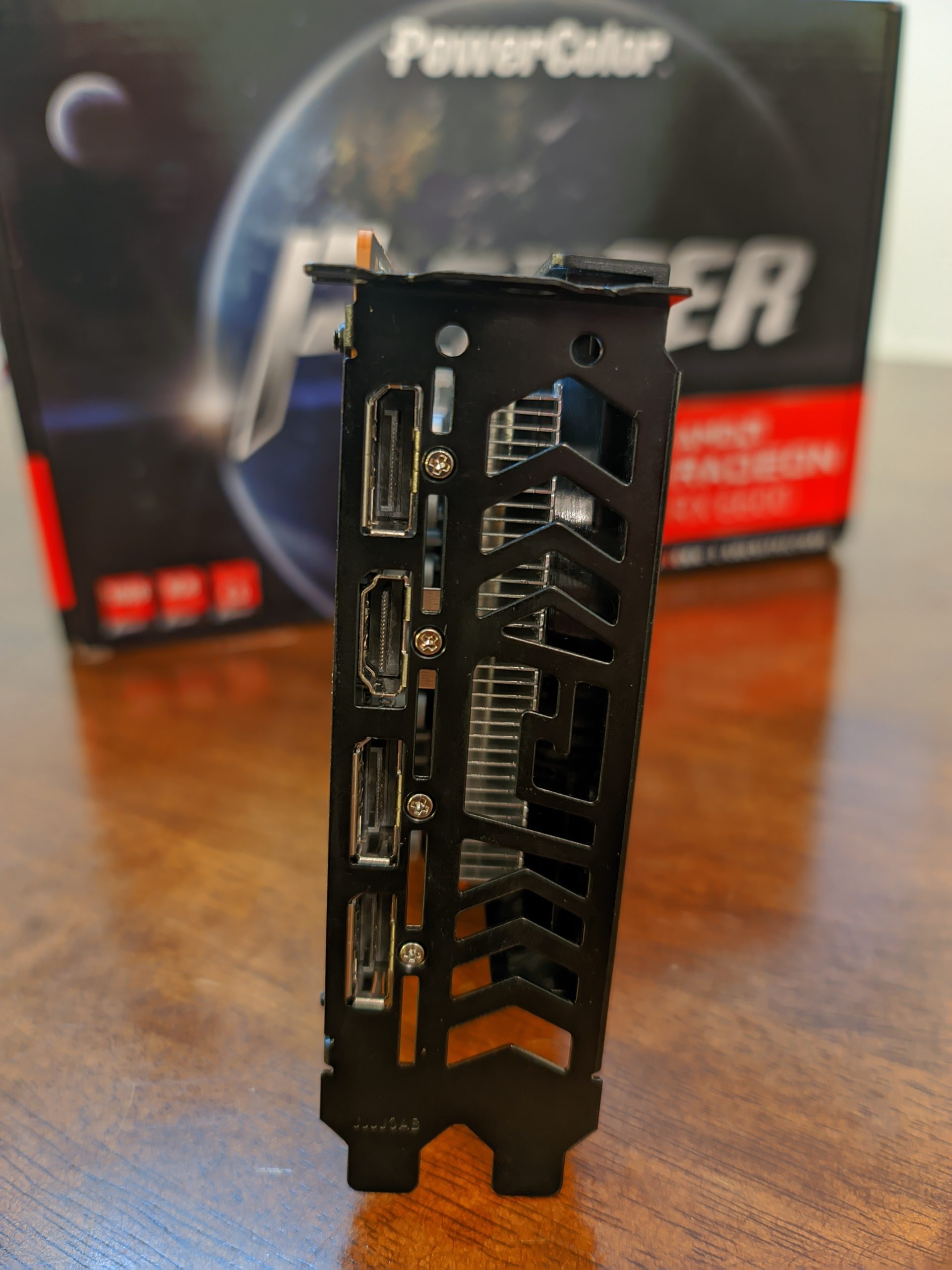 Taking the PowerColor RX 6600 out of the box, we are greeted with the standard 2-fan cooling system, with copper pipes leading towards the air fins. Output options are 3x Display Ports and a single HDMI port, so users have choices to hook up multiple monitors if need be. Unlike the higher-end GPU’s requiring a highway of power connectors, the single 8-pin power connector on both these cards leads to believe that the power supply recommendation for this GPU wouldn’t cost too much and would be an easier fit for someone coming from their previous system that isn’t really keen on upgrading the power supply. Though, having an overhead would certainly be ideal if enthusiasts are looking to overclock and so on. 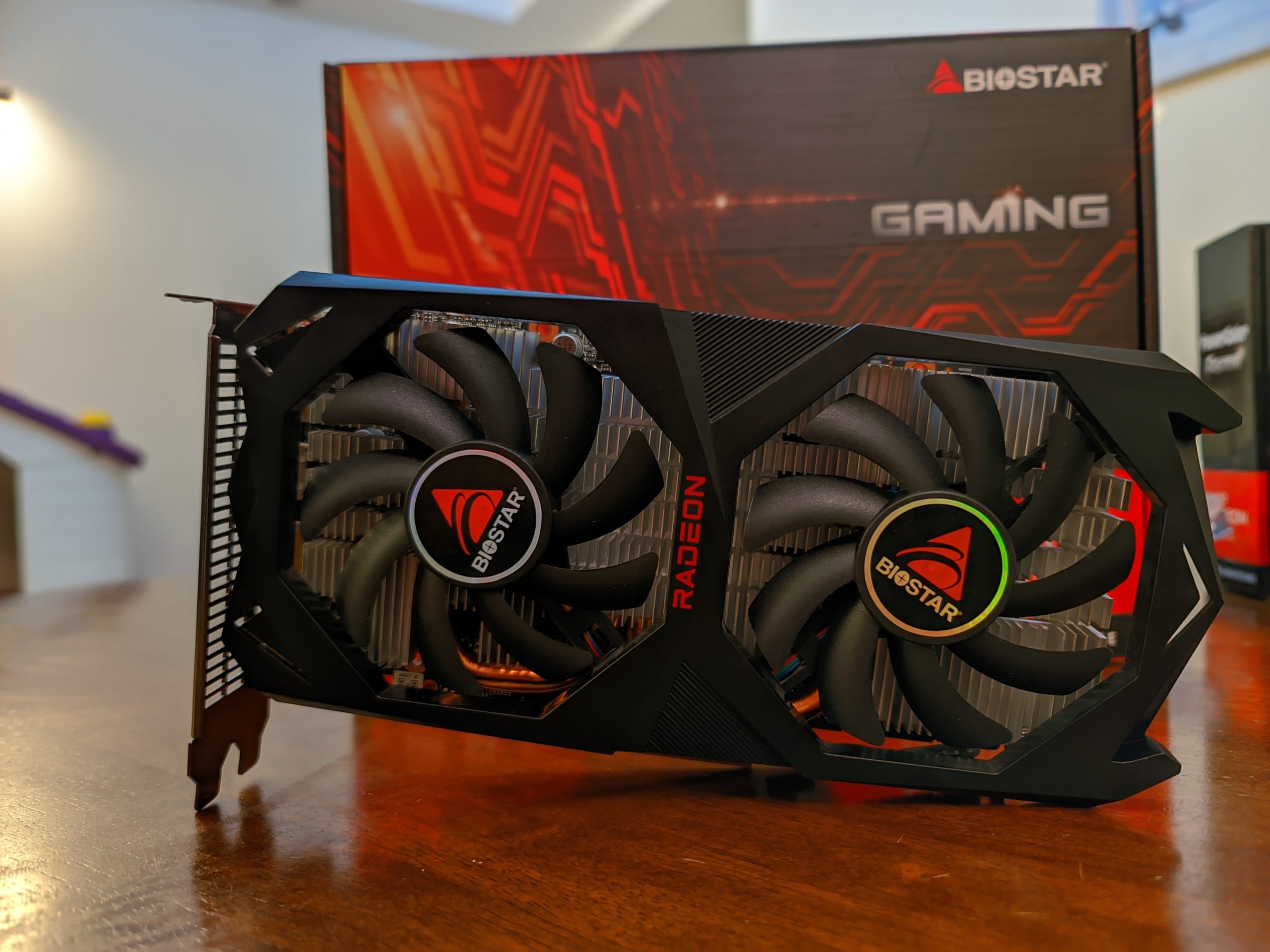 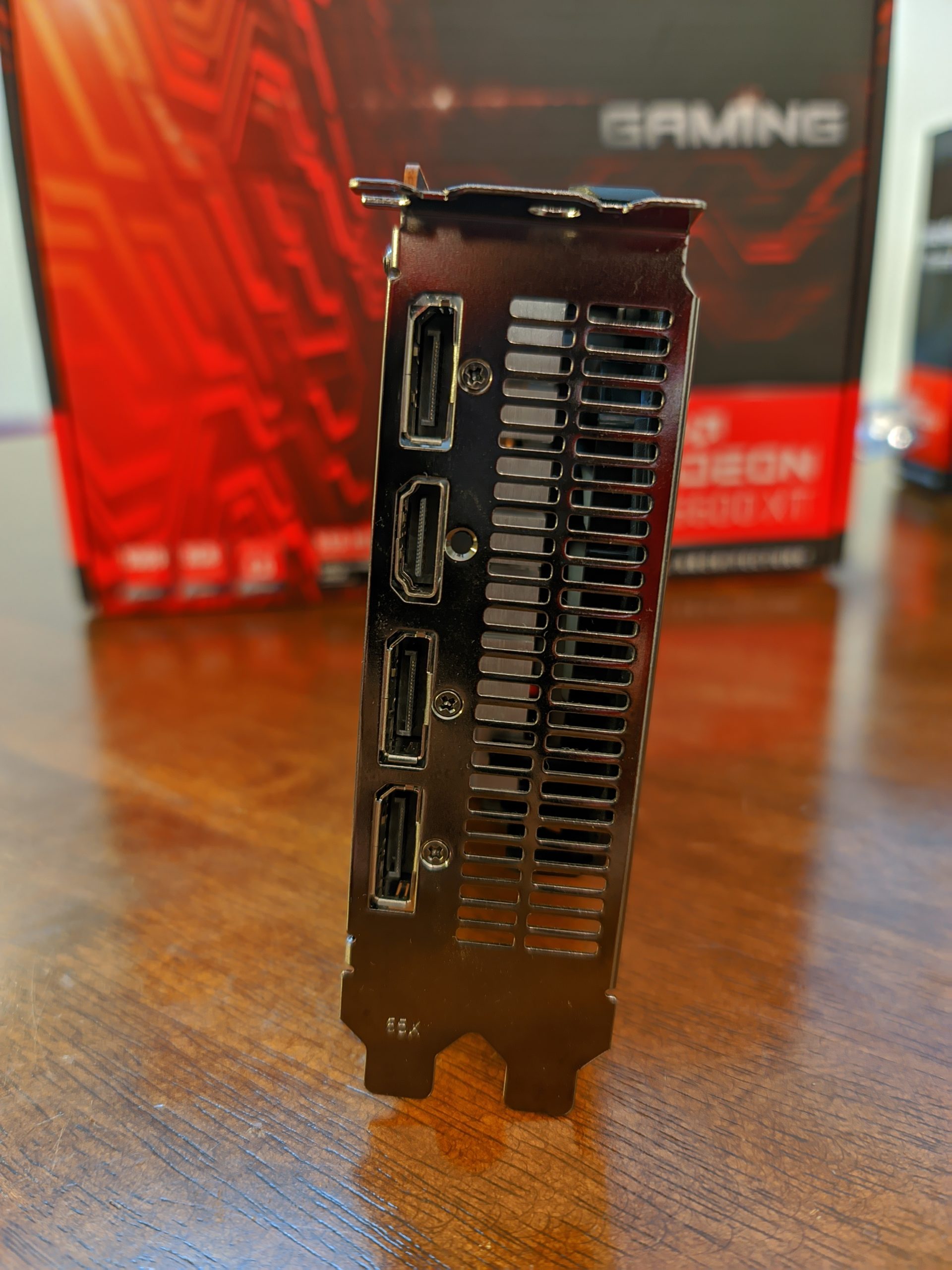 Let’s see those numbers from the diagram above be put to the test, as we benchmark these two cards against each other and see how they perform in these 3 aspects:

Below is the specification of the test bench the cards will be tested on: 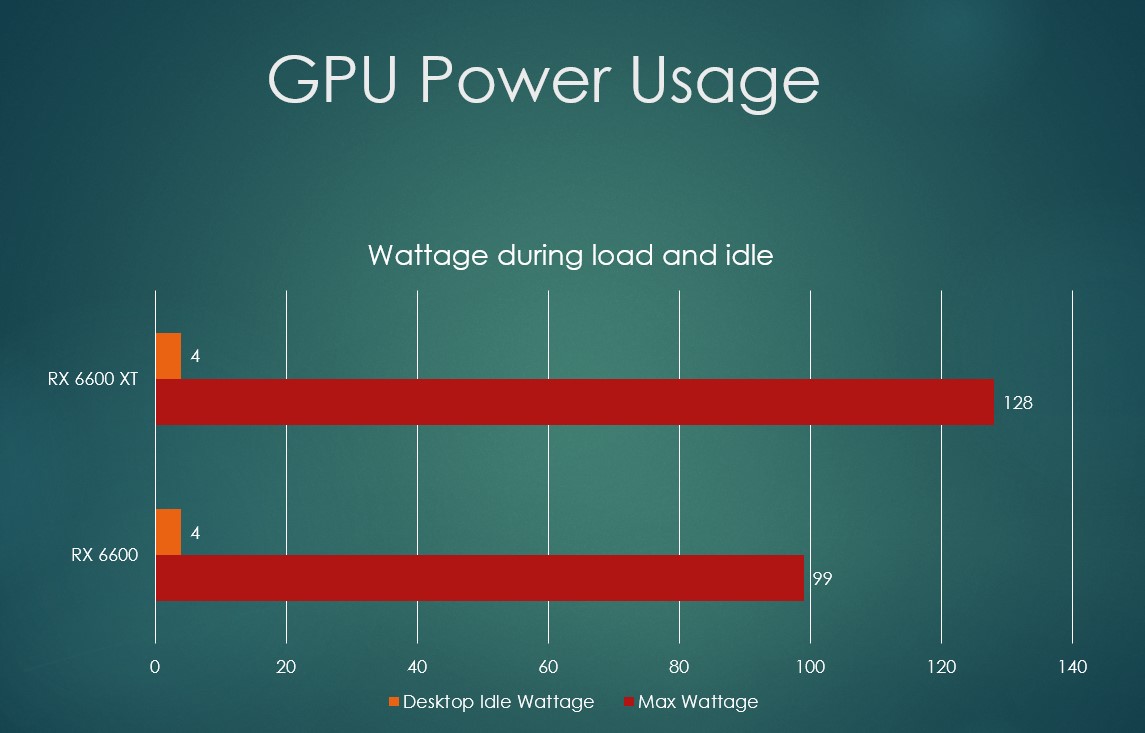 As power usages go, both the RX 6600 and 6600 XT run pretty efficiently for what they deliver. Idle power usages were taken on the desktop with Chrome running in the background, while the load power usage was taken when a game is running and GPU utilization is at 99%, There have been instances where power draw can be reduced or increased based on the scenario by tinkering the power limit on the Radeon Software, thou this is done at the user’s discrepancy. 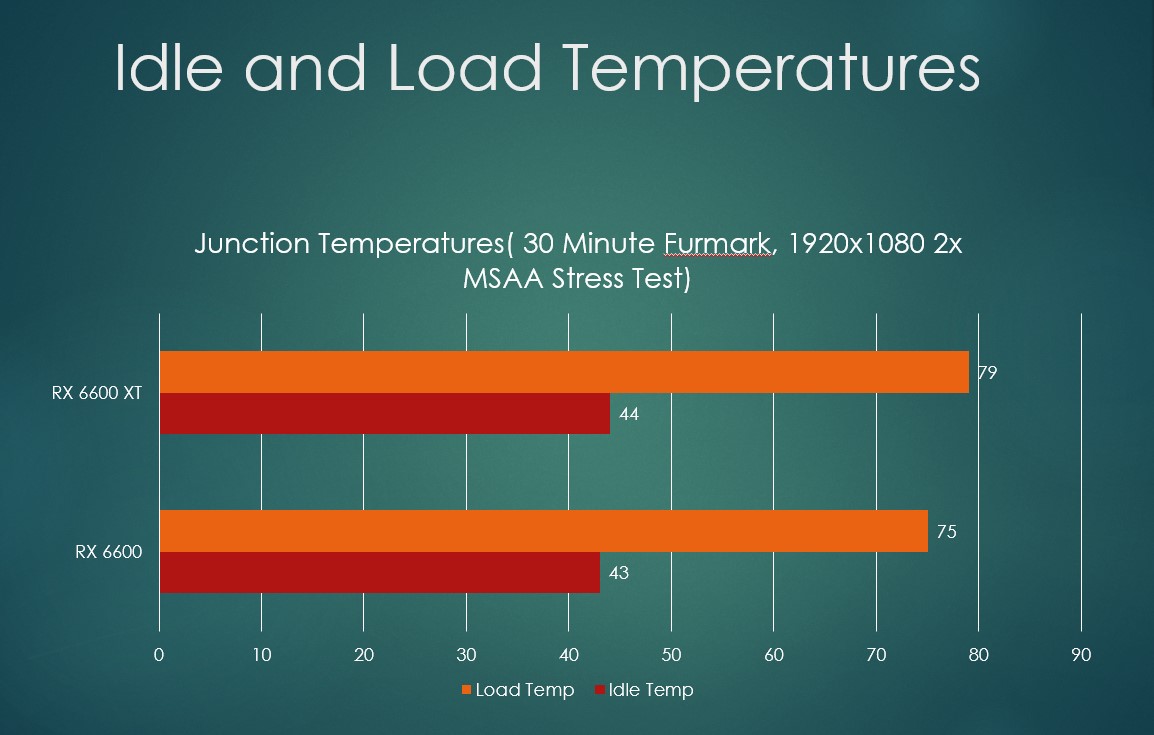 Temperatures on these cards also seem fairly normal, even under synthetic load. The 30-minute Furmark test only stresses the GPU to its max, making the junction temperatures reach a certain temperature after a period of time. These temperatures may differ from different scenarios such as gaming, as both CPU and GPU will be working and causing heat to build up in the PC making peak temperatures spike slightly higher. But overall, junction temperatures on both cards are adequate and no thermal throttling at the above-indicated temperatures. The 6600 XT does run a little hotter under load due to it pulling more power in. Also, the fan designs do play a big role in cooling the cards. I did notice the fans on the 6600 XT were a bit noisier compared to the RX 6600’s fans when maxed out. 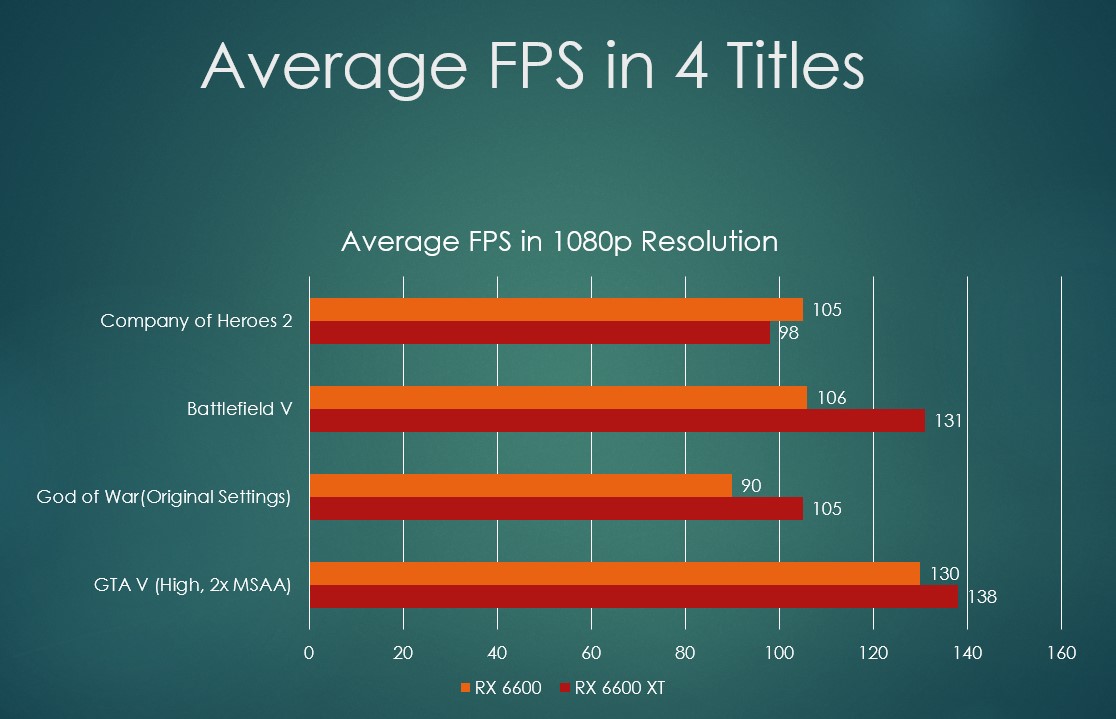 Finally, we come to the gaming benchmarks for these two cards and I have to say, I am impressed with the performance we get out of these two, but also a little confused as to why the non-XT rendition of a card exists. Performance gains were around the 10% average mark jumping from the RX 6600 to the RX 6600 XT, with Company of Heroes 2 being the only exception for some reason.

Battlefield V saw the biggest margin in terms of average FPS between the two cards. This is possibly due to the game using up the extra bandwidth the 6600 XT seems to offer. DX12 ran very well on the two cards, giving an edge on average FPS coming from DX11.

The discrepancy of performance between the two cards is due to the lower clock speeds and memory speeds of the RX 6600 and also the reduced memory bandwidth. The figures above don’t have much of a margin to them and to the average gamer, I dont think it would matter. The difference of 10fps might seem like a lot, but if most of your games seem to run above 100fps most of the time, I think that 10fps discrepancy can easily be shrugged off.

I am still a little baffled as to why the two cards were released within a short time span between them. On one hand, I get that the market right now is saturated with scalpers/miners who rake in whatever cards they see in the market for their own gains, and AMD releases these two cards in quick successions to combat the shortage of supplies to PC enthusiasts and etc. On the other hand, if the cards are performing almost similarly between each other, who’s to say which card belongs in which bracket? Time can only tell right now to see which card stands the test of time.

These two cards trade punches with the Nvidia equivalent, the RTX 3060 when it comes to performance. Putting Ray Tracing aside, the 6600 XT beats out the RTX 3060 in 90% percent of gaming benchmarks by quite a margin, while the RX 6600 either is performing slightly worst most of the time or is in a stalemate with the RTX 3060 in specific titles.

Which Should You Get?

Honestly at this point, if you are looking for a great 1080p gaming card, the RX 6600 and 6600 XT ticks many of the boxes right now, IF, they were priced as originally published. Seeing how the price of cards are fluctuating a lot right now, who’s to say which card is currently more expensive or less expensive, more so, which card is even in stock nowadays? Our advice is just to get whichever card you find in stock. You won’t be disappointed if 1080p gaming is your cup of tea and you have zero regards for Ray Tracing. If by chance you have a choice of both being in stock, stick to getting the RX 6600 XT to futureproof your desktop with a GPU that has better performance, more headroom in terms of overclocking and will most probably last you longer in the years to come.