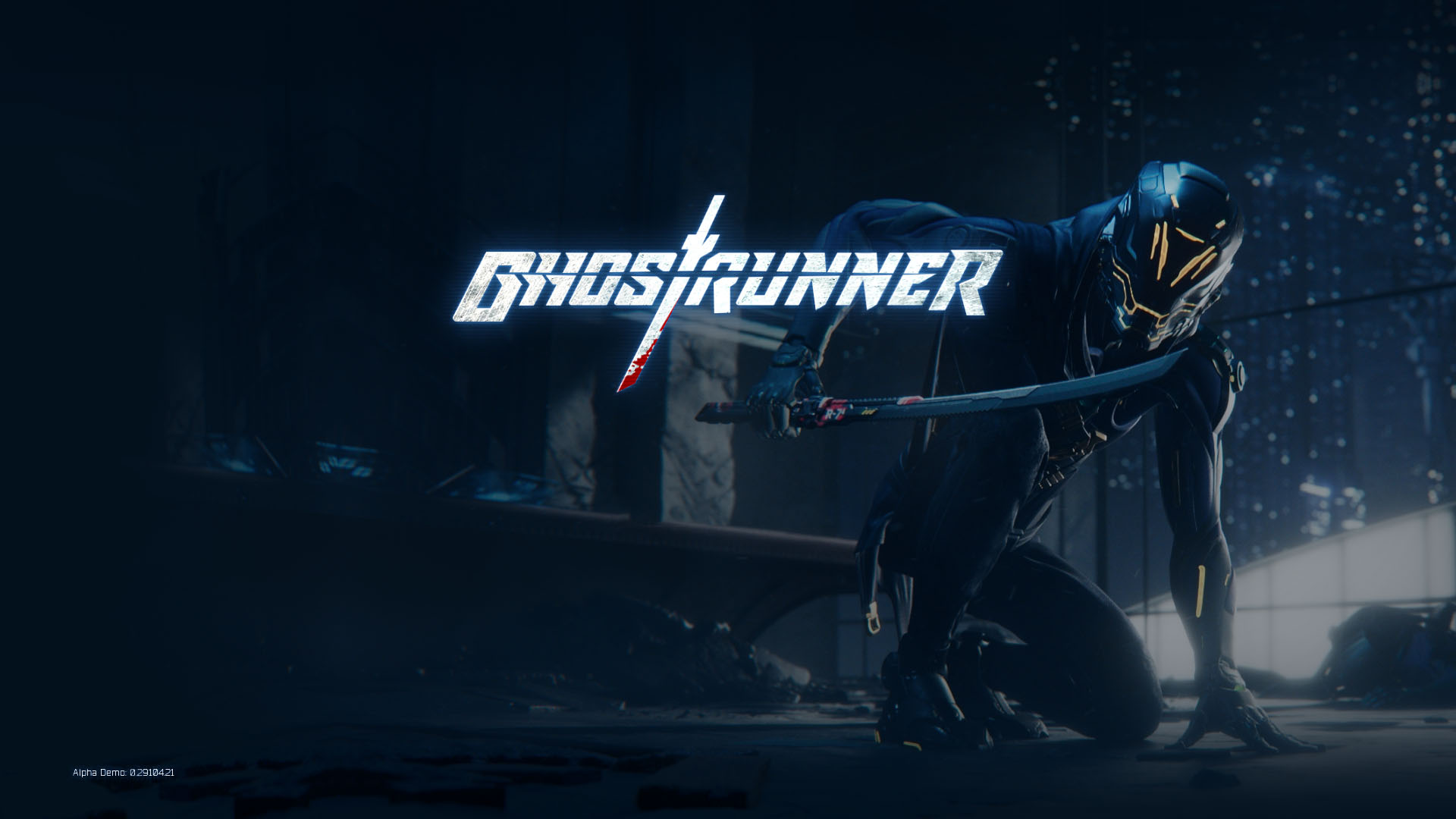 Here we are with another game that utilizes a cyberpunk setting. I had the good fortune to actually play the demo thanks to the folks from 505 Games. While admittedly I was quite hyped up when the game was first revealed. 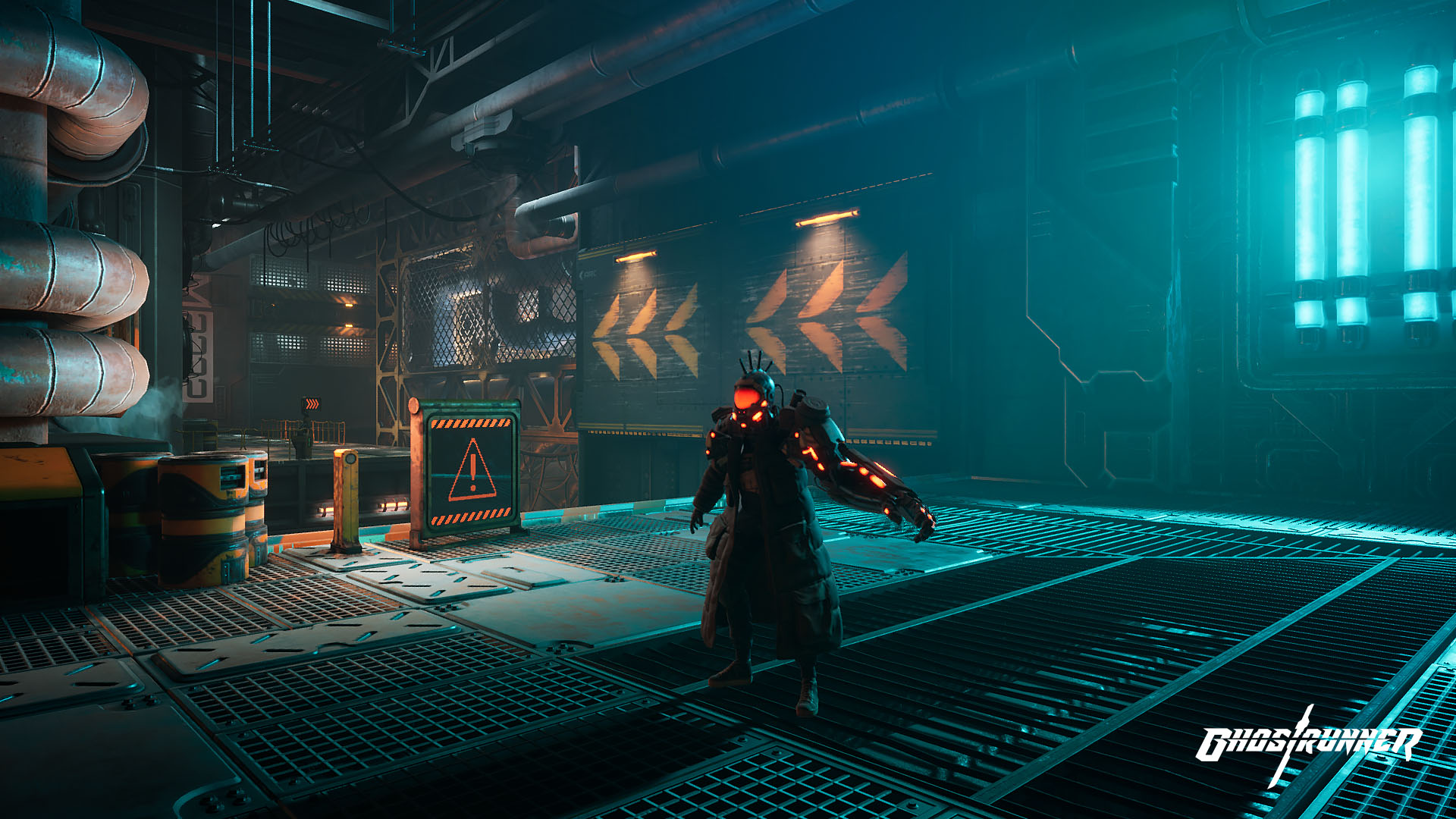 However, playing through the demo gotten me with some mixed feelings but it is a rather 50/50 considering this isn’t the game at its fullest form. Right now this is merely an impression that is entirely based on the demo and things may have changed when the game will be launched later this month.

Off the bat, Ghostrunner features a story that can be far too familiar for those that have delved into cyberpunk stories. You assumed the role of what seemed to be a cybernetic ninja hero that wields a katana and has the ability to slow down time for a short period. 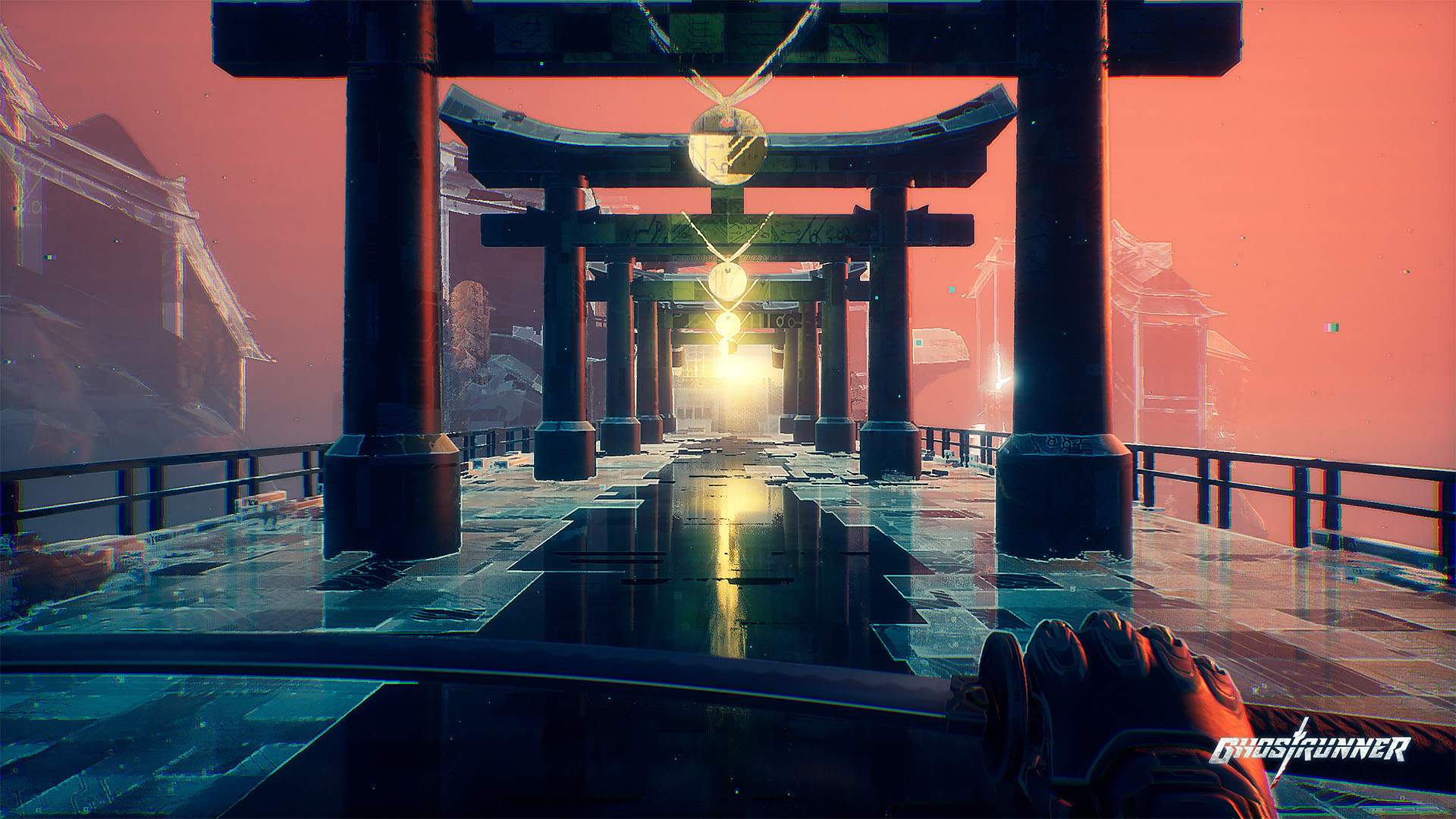 Within the cyber-city called Dharma Tower, you are awakened by the voice of an AI and you are first tasked is to free him from captivity. Along the way, you will learn that your major objective is to climb to the highest point of the tower and to take out the evil Keymaster who runs the entire city.

This is truly the most common and known story structure for any cyberpunk story that has ever conjured up but it works nonetheless.

As mentioned, the demo consists of two levels – one at the physical world level and at the cyber world. The demo puts you right at the start of the game which as expected introduces the basic controls of the game. 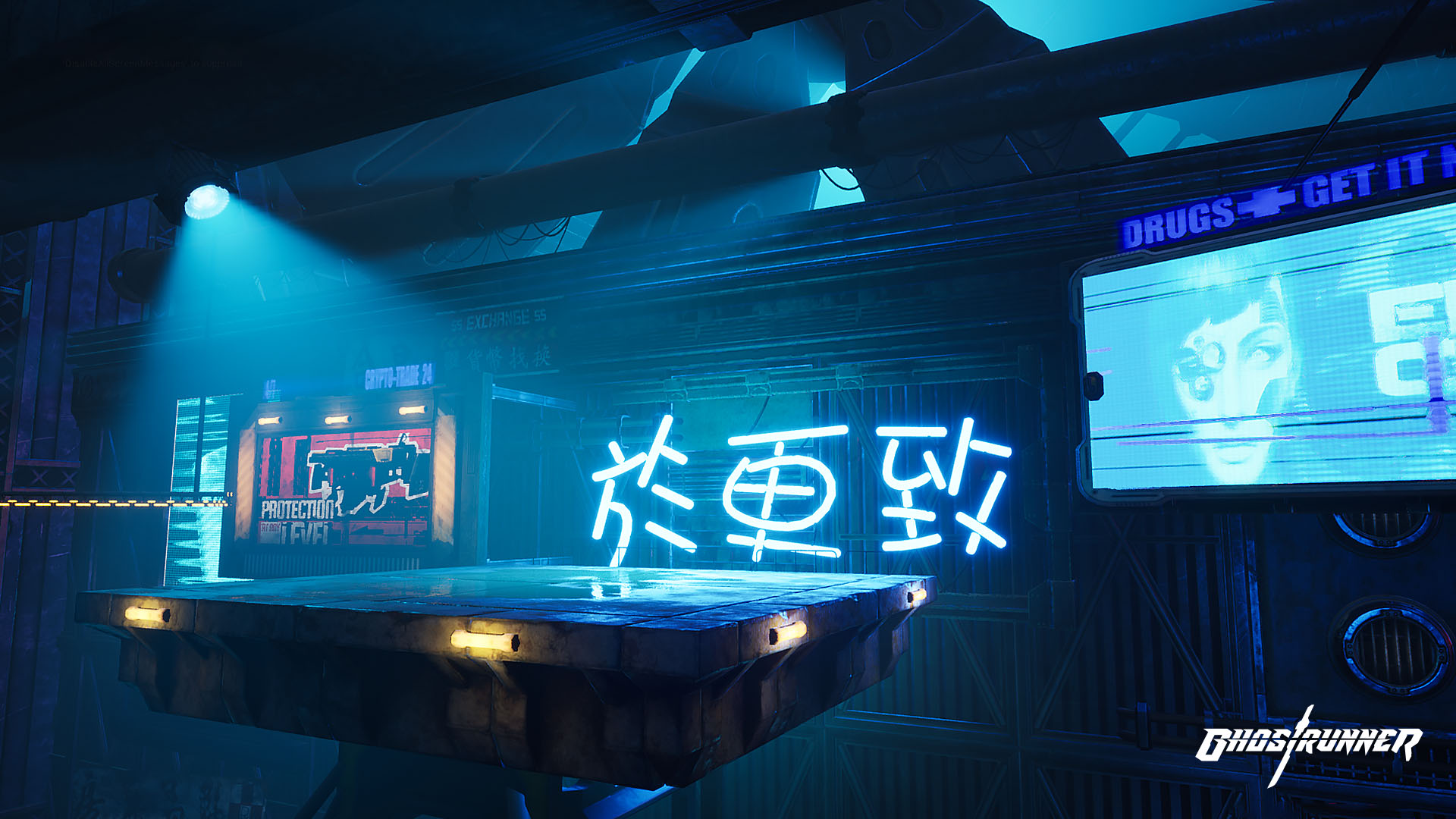 Right of the bat, what I really liked was the graphics of the game. Even without Ray tracing features, the cyberpunk settings from the lights to the textures are all so good to look at. From the neon lights of certain buildings to water dripping onto the walls and floors, it all contributes to a very beautiful cyberpunk world.

All of it is such a feast to the eye. I am running an RX580 card – which isn’t a slouch nor a powerhouse, and the game ran very smoothly. Framerates were rather stable at 60 fps which I am happy about. 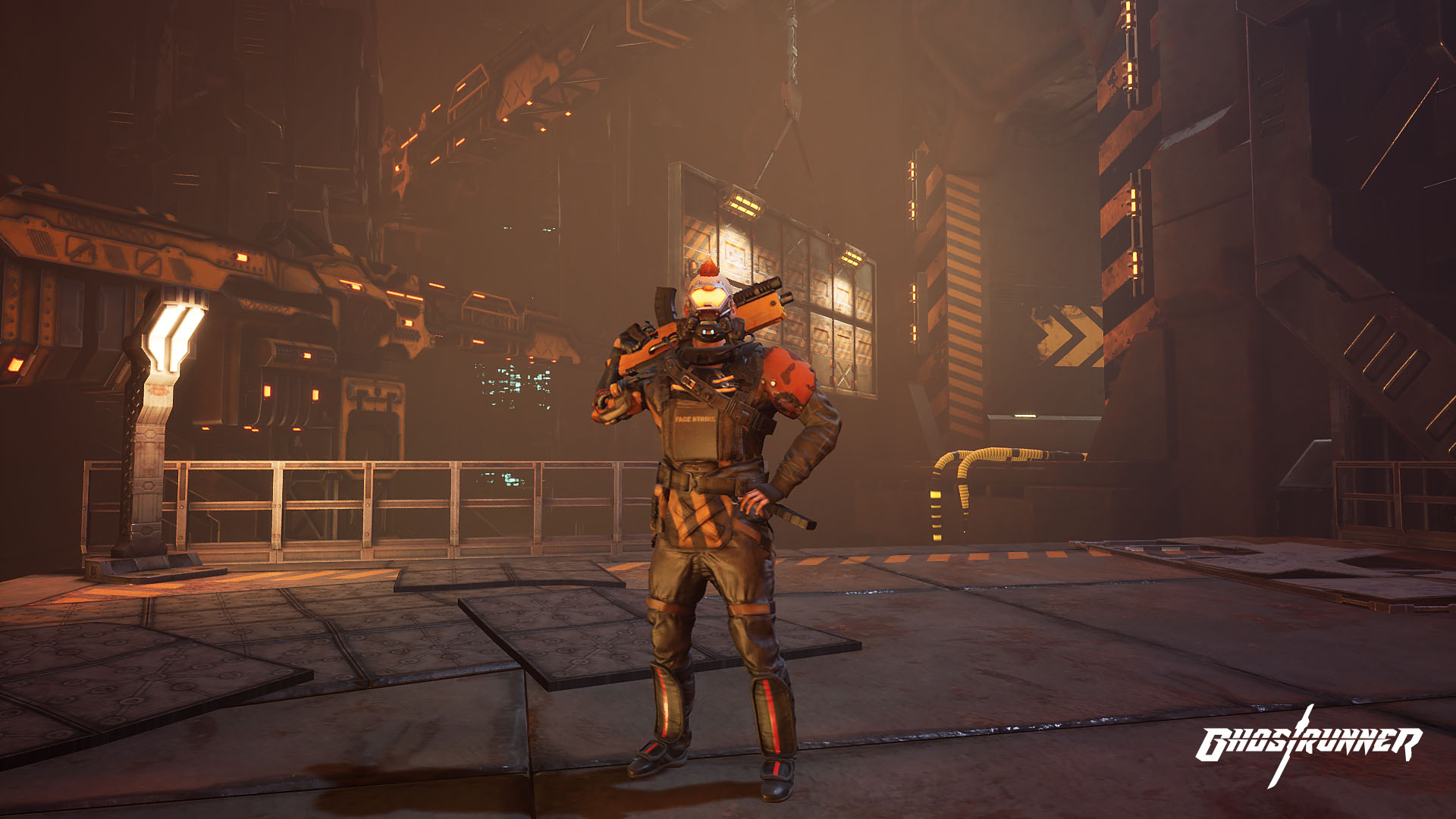 The controls of this game are tight and responsive, although it may need some time to get used to. As being a PC game, the control settings are robust hence movement sensitivity can still be tweaked to suit your preference. Nonetheless, even at default, it can get a little woozy for some players. 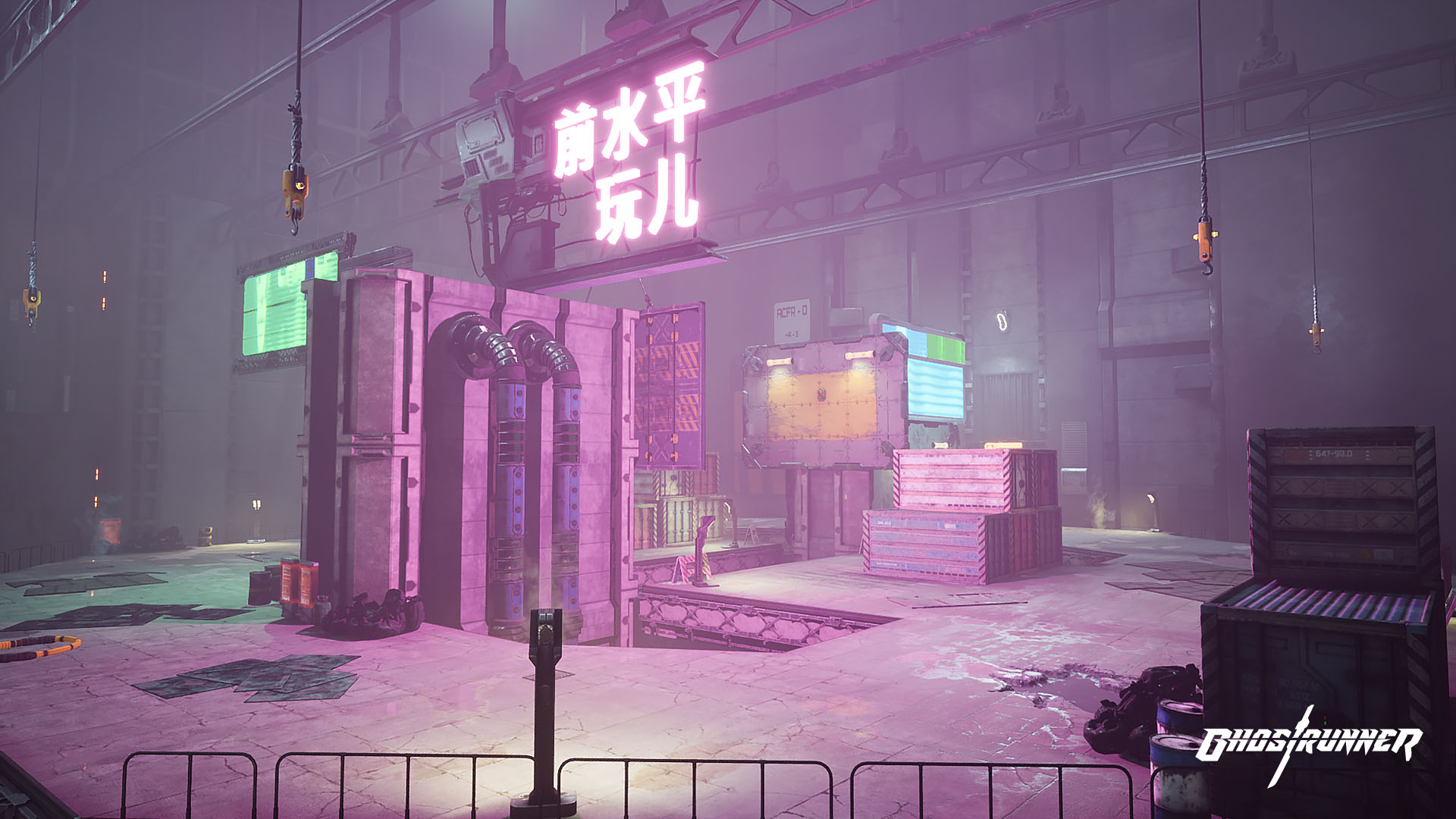 However, once players start parkouring around the city, you will be reminded of Mirror’s Edge by Dice which started the whole First-Person parkour movement into video games. The inspiration is undeniably from there.

From the ability to wall run to jumping off tall buildings, the influence is too hard not too noticeable. Controls are very responsive from the directional movement of the mouse to engaging special moves at the touch of a key which makes it fun to play. 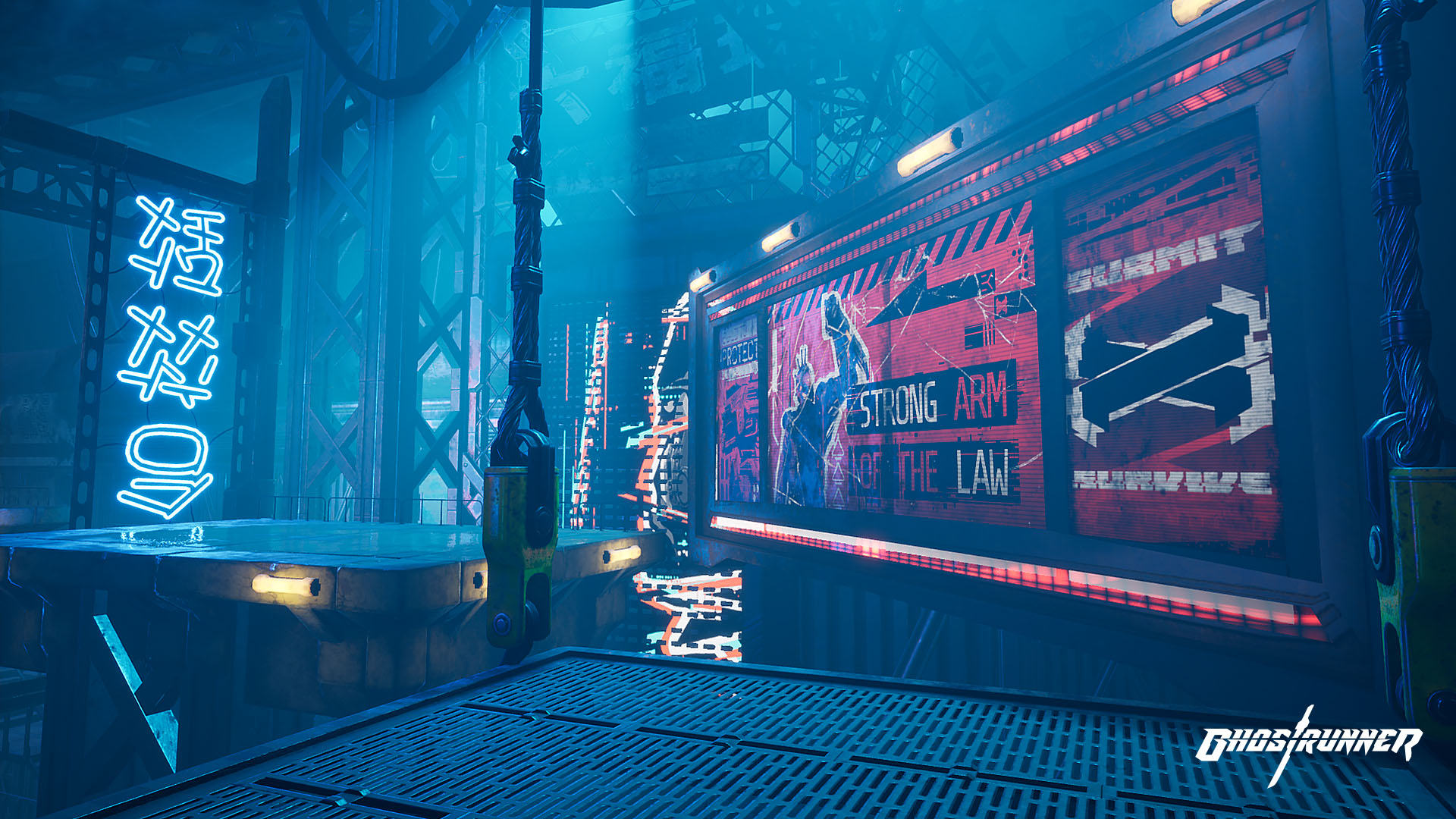 Another good thing about Ghostrunner is the fact that the requirements of the game are rather humble. Looking at the screenshots and the trailer when it was first revealed gave the impression the game requires an above decent pc spec.

However, my pc is considered built with low to mid-range specs and the game ran very smoothly without a hitch. I was quite happy about this part. It is always a good feeling when your pc is able to run a game at its highest setting without any compromise.

The not so good

While I did enjoy the demo in the end, there are some things I need to point out from just playing the demo. No game is perfect in my book regardless of how I love a game.

For starters, this is not an easy game. If you think dark souls type games are a bane of your gaming existence then you might need to add this one into that list. Ghostrunner utilizes one hit, one kill mechanics which means all enemies can be downed with just a single slice. 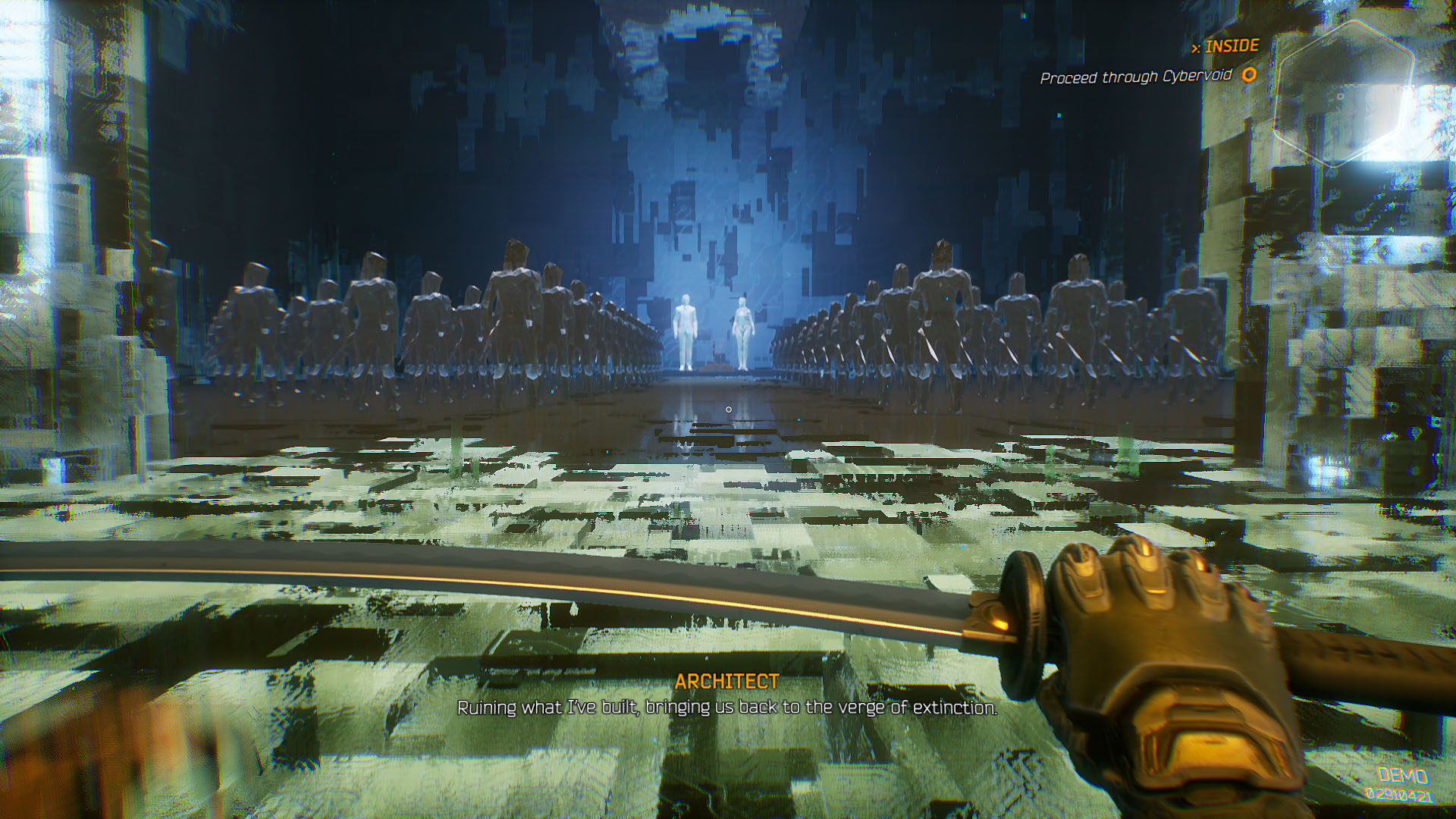 However, applies to you as well. That said, this entire game relies on trial and error progression which means you will die a lot.

The developers themselves aren’t afraid to say that they developed the game for the hardcore players in mind. So casual players, you may need to stay out on this one because, in the long run, you might not going to enjoy this much. 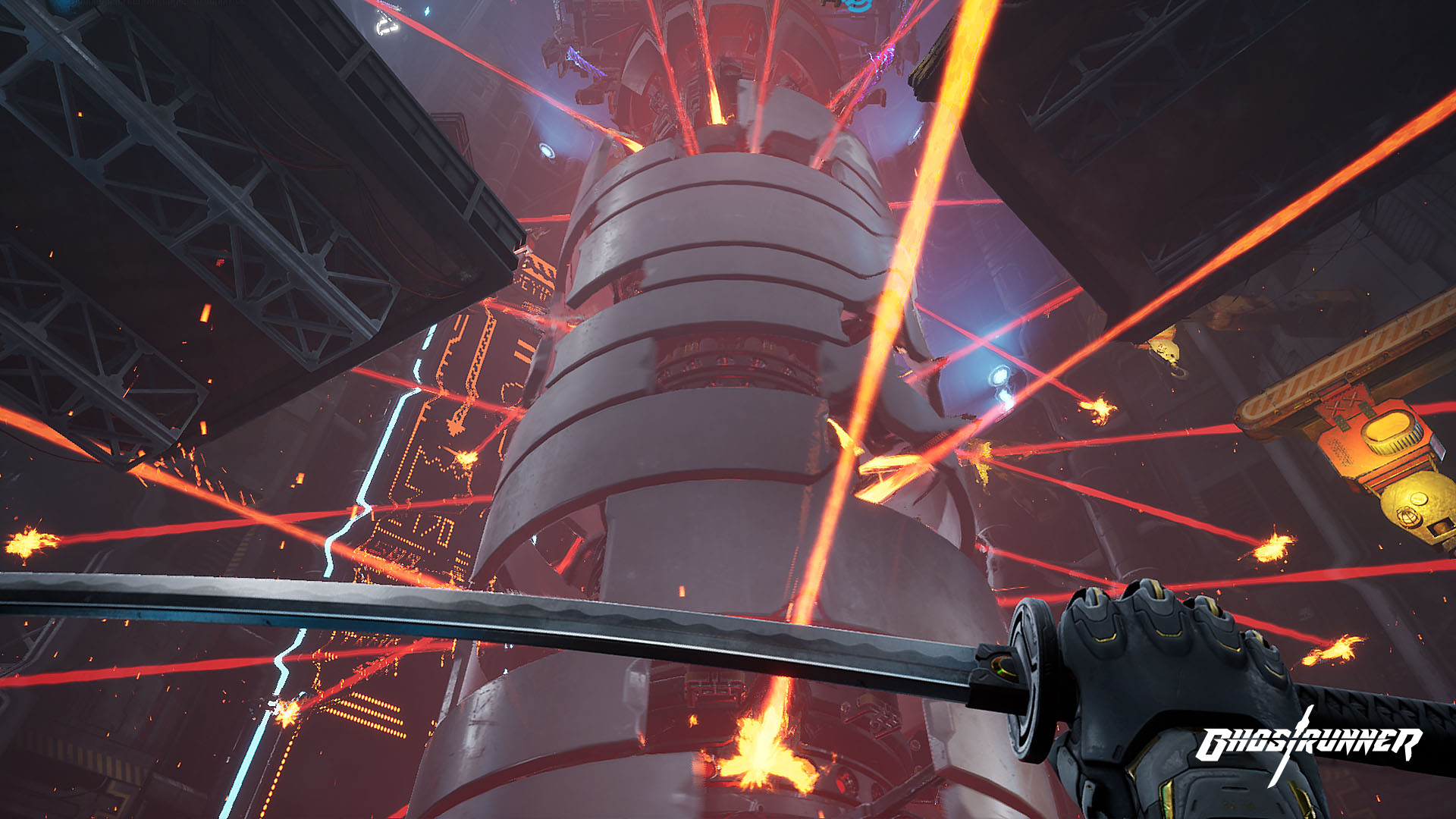 That said, the entire demo also gives me the feeling that the game focused too much on how fast and precise you perform. There is little emphasis on story development or at least a strike in balance with it.

During gameplay, you can be too absorbed into how should you proceed with this particular part of a level perfectly. Which in turn, you would likely forget about the story. The story can feel rather tact on then being built around the gameplay mechanics.

At this time of this piece is written, my scale towards the game is still leaning towards being not impressed. There are very few memorable parts of the demo that got me hooked. Apart from the impressive graphics to the tight controls, the demo still has not shown much of its strength.

However considering that this is still a demo, I will reserve full judgment of the game until launch. There is a good chance that things may play out differently once I get to hold of the full game. 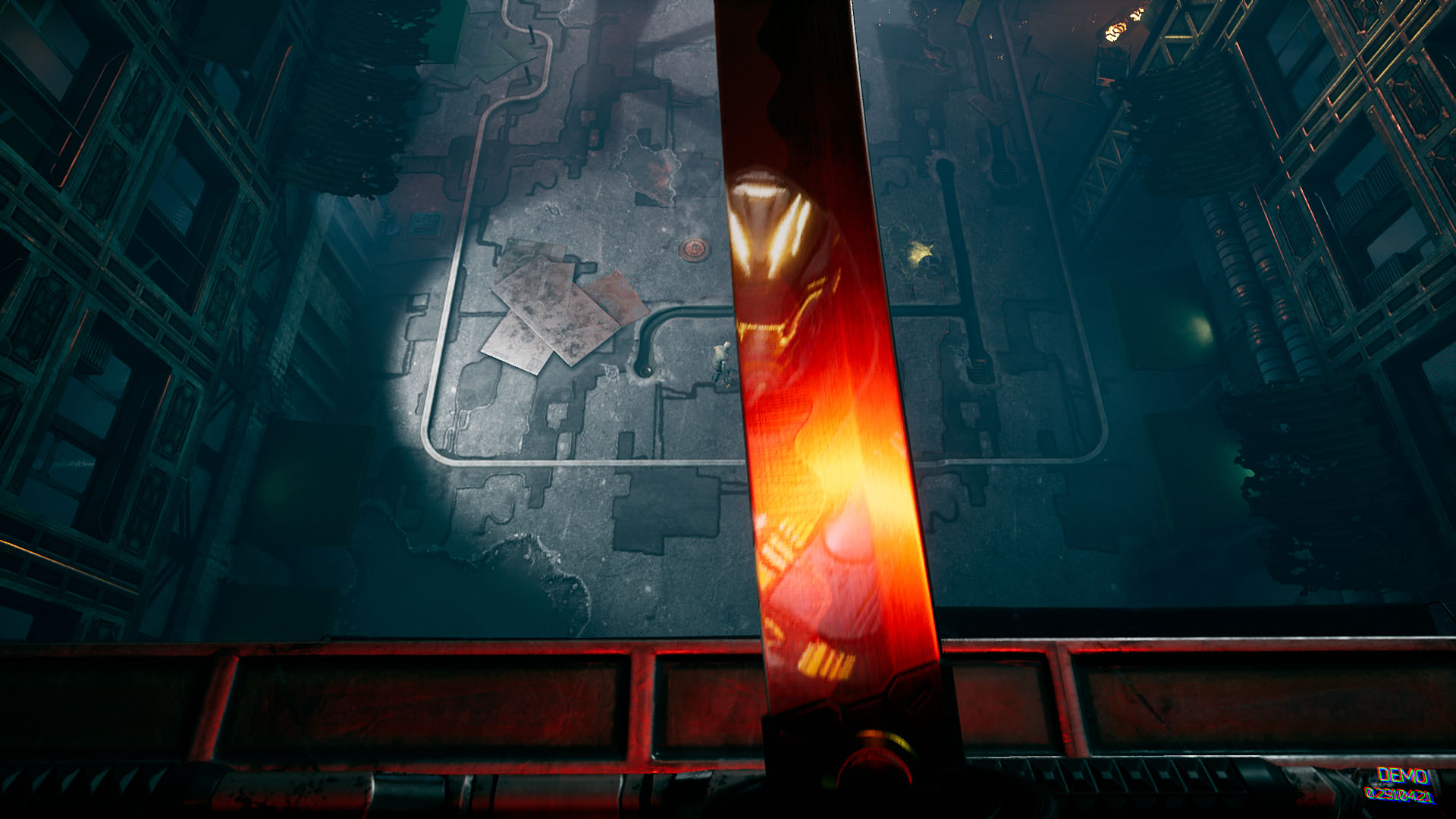 In the meantime, do look forward to our review of the game soon and I am hoping the full game is going to get me excited more to play it.

Ghostrunner will be out on the 27th of October on Playstation 4, Xbox One, Switch, Epic Store, Steam, and GOG.