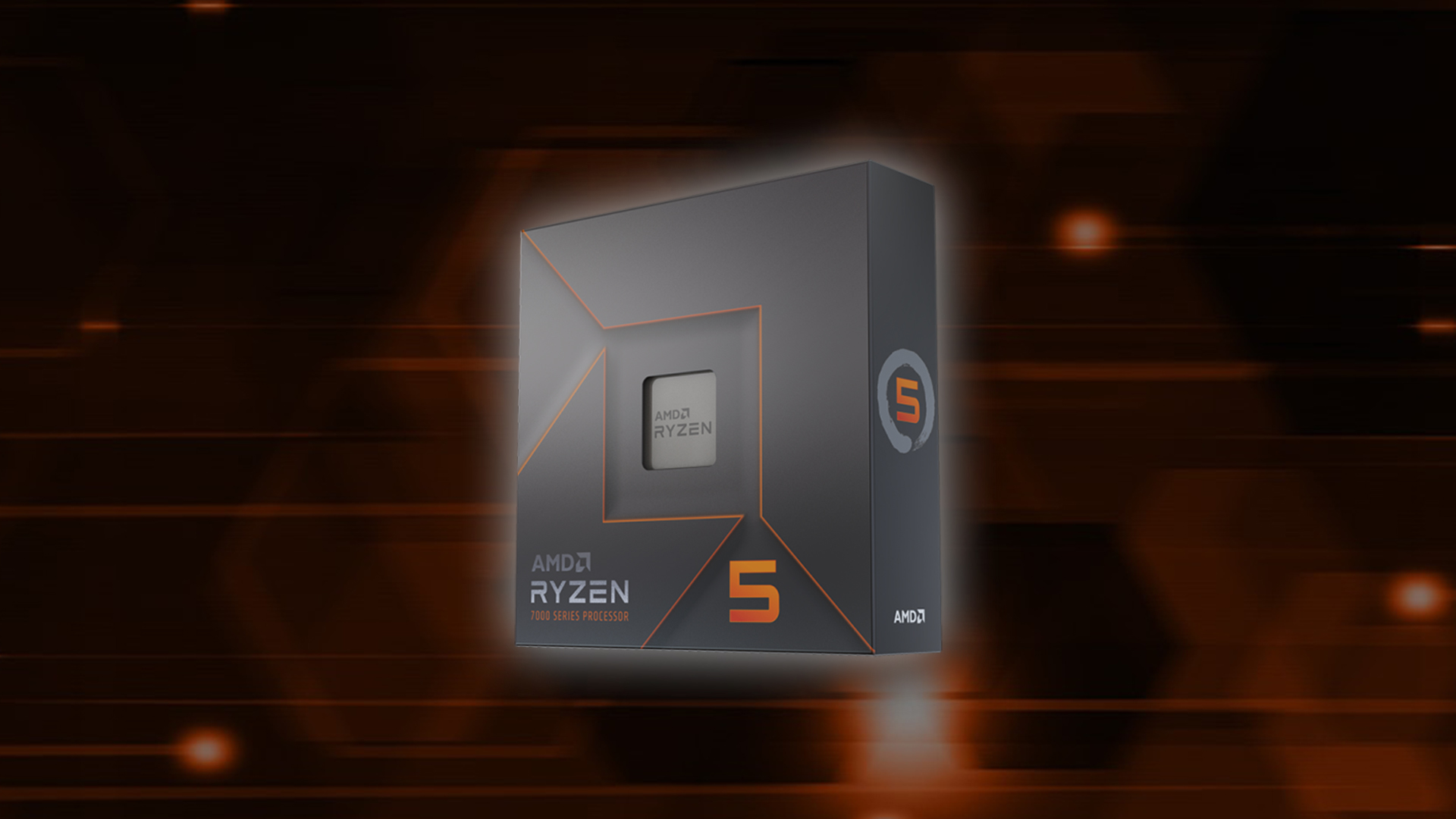 Beginning from pre-launch leaks up to its launch on the 27th of September, the Ryzen 7000 series have been plagued with reports of high thermal operating temperatures on most benchmark reports. To satisfy our curiosity, we’ve gotten our hands on the AMD Ryzen 5 7600X to run a benchmark of our own. 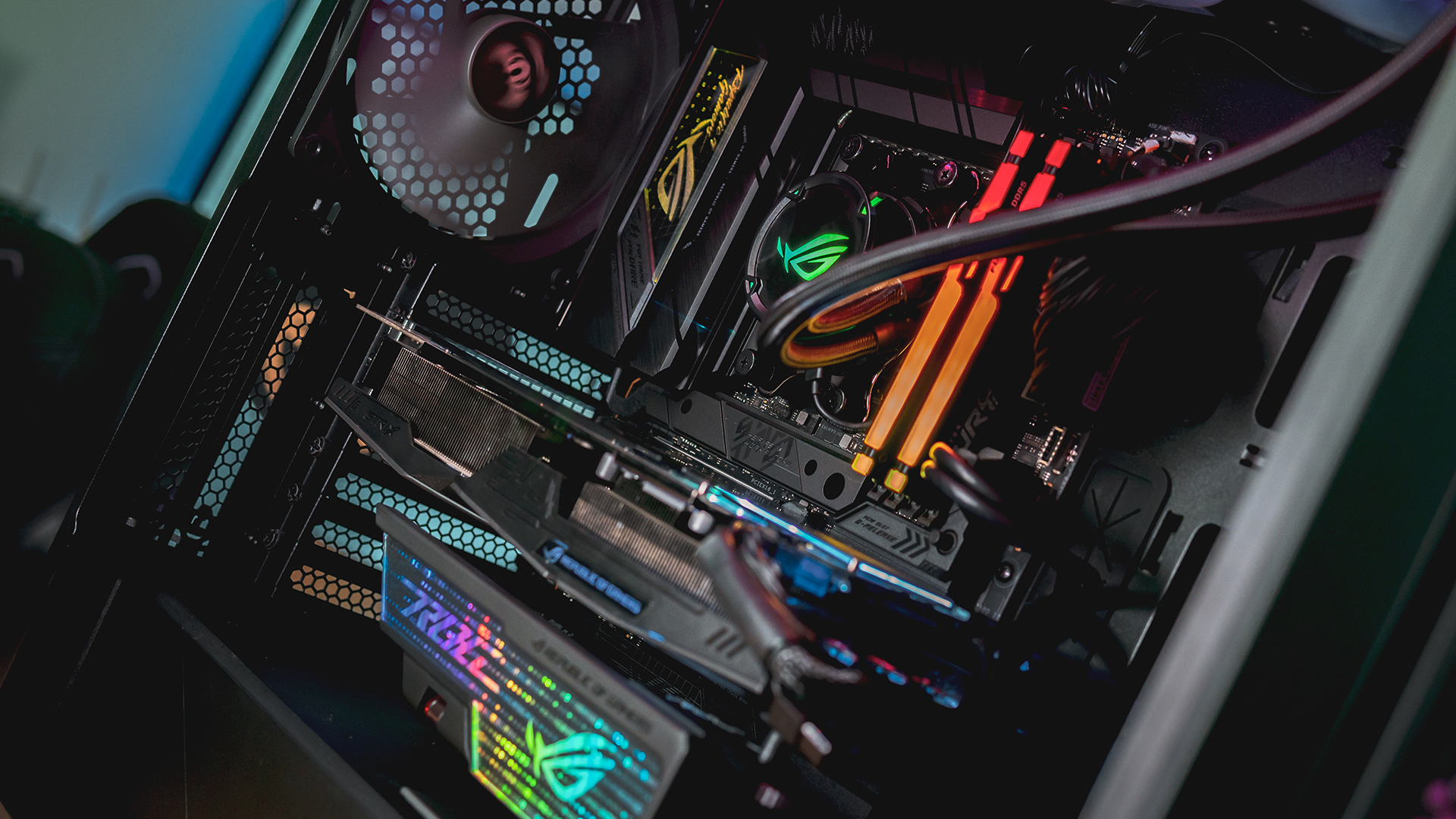 As announced, the AM5 sockets on the Ryzen 7000 “Raphel” series are LGA based so all the pins are located on the motherboard instead. AMD has also guaranteed that they will be supporting the AM5 socket until 2025. The CPUs are fabricated on TSMC’s 5nm process which boasts a maximum boost clock of above 5Ghz – and the best part, it’s compatible with AM4 coolers.

Unlike its predecessor, AMD have further improved the Ryzen 7000 to support PCIe 5.0 and DDR5 RAMs. These are mostly plus points in my books because it equates to improved performance, better power management and has better longevity in terms of technology lifespan. Complementing the DDR5 support is AMD EXPO™ Technology, short for Extended Profiles for Overclocking. EXPO™ is AMD’s take on Intel’s XMP, providing users with a single click RAM overclocking capabilities. The caveat here is that it comes at a higher price as DDR5 still costs more than DDR4 in general, and it may take awhile for most RAM to release modules that support EXPO™. As of writing this article, AMD have listed Corsair, G.Skill, ADATA , GEIL and Kingston Technology as brands that supports EXPO™ on their website.

The 7000 Series also comes with on-chip graphics which are based on the RDNA2 architecture. While these integrated GPU are nowhere near gaming performance ready, they are sufficient for basic display support should there be a need.

AMD has also stayed true to its pure “performance” core only design, with each core carrying 1MB of L2 Cache and a shared 32MB L3 Cache. The 7600X also has a TDP rating of 105 Watts and a peak power draw of 140 Watts. The ROG Strix X670E-F Gaming WiFi is one of the three ROG Strix motherboards available in Malaysia for the AM5 X670 platform. Retailing at RM 2297, it is also the most affordable high end ROG X670E motherboard from ASUS.

The design theme is rather straight forward this time around. It’s an all black 8-layer PCB with black heatsink shields for the VRM and NVMEs. Some design prints are carefully placed across the board to further accentuate it’s gaming centric purposes with a RGB Eye Logo on the usual north west corner.

The motherboard is equipped with 16+2 90A power stages with the Digi+ VRM for power delivery control. ASUS have also included the PROCOOL II dual power connectors which are known for its snug fit and better heat dissipation with lower electrical impedance.

In line with AMD’s goal to support PCIe 5 and DDR5, the main PCIe interface is a PCIe 5.0 x16 with ASUS’ prorietary Q-Release design for quick replacements. There are also two PCIE 5.0 M.2 slots which supports NVME and SATA RAID configurations via AMD RAID Xpert2 (an application provided for AMD RAID users to configure and manage RAID arrays for their AMD system).

The 4 DDR5 RAM slots that comes with this motherboard are AMD EXPO™ ready for quick overclocking and it can support up to 6400 MT/s. The bios also comes with AEMP (ASUS Enhanced Memory Profile) for optimized RAM configurations. 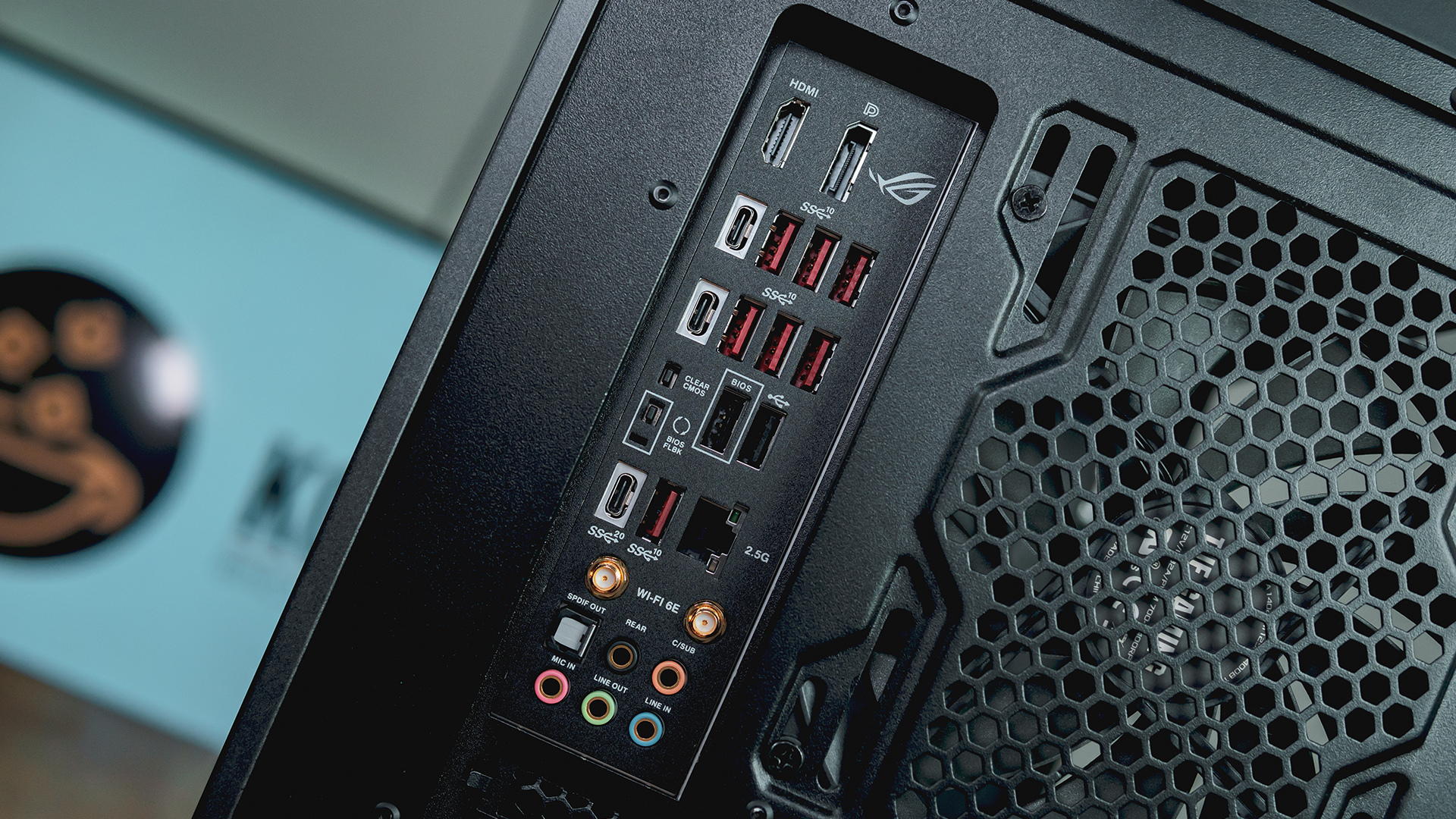 This is a motherboard that can cater to all your USB connectivity needs. On the back IO, there is an array of 12 USB ports and the motherboards supports up to another 5 USB ports in the front. The breakdown of the USB Ports are as below.

The rest of the standard IO ports at the back includes a HDMI & DP port, one Optical S/PDIF Out port, 5 gold plated audio jacks to support the 7.1 Channel ROG SupremeFX audio, a wifi module, an ethernet port, a Clear CMOS button and one BIOS FlashBack™ button.

The RAMs used in the benchmark are a pair of 16GB 4800MHz Kingston FURY Beast DDR5 RGB. As mentioned earlier, Kingston Technology is one of the five brands that are AMD EXPO™ Certified that is announced by AMD themselves.

Aesthetically, the FURY Beast comes with all black matt casing and a 12 LED ARGB Bar right on the top. The ARGB can be configured with most motherboards, or with Kingston’s FURY CTRL software if preferred otherwise.

Performance wise, these RAMs can support up to 6000MT/s in their DDR5 models and will work fine for extreme gaming or extensive productivity needs.

I’ve subjected the Ryzen 5 7600X on three different benchmarks (3DMark CPU Profile, Geekbench and Cinebench R23) that focuses on CPU only. The scores are based on an average of 5 sets of scores per benchmark type.

Based on the benchmark results, the 7600X is a huge improvement over its predecessor. It has scored at least 15% above the 5600X in all benchmarks. We even saw a significant improvement of 30% on both Geekbench scores and a .

For the comparison against the Intel 12600K, we can see that the Ryzen 7600X is close but still a little behind in Multi-Core processing. While the Ryzen 7600X may have a more modern manufacturing process and a higher turbo boost frequency, the Intel 12600K still takes the lead with its 4 additional physical cores and larger L1 and L2 cache. The Intel 12600K leads by a small difference of 5% to 16% in Multi-Core scores while it loses out by 1% to 15% in Single-Core scores.

AMD has made a great improvements to their latest line of Ryzen 7000 series. From our testing, we see that the Ryzen™ 5 7600X is significantly faster than it’s predecessor and it has caught up against the Intel 12600K. The initiative to include modern technology is also a great move from AMD, especially with the support of PCIe 5.0 and DDR5 interface. AMD’s move to to adopt the LGA in the AM5 socket is a highly welcomed feature as well, not to mention that it’s also backwards compatible with AM4 coolers. The CPUs are also capable of running in stable conditions even at 95°C during our benchmarking process.

The cost of adopting DDR5 may be a temporary negative point for early adopters, but it should get more affordable with time as DDR4 is about to reach the end of its life cycle. Users may also find that cooling may be a concern for the Ryzen 7000 series as they run slightly hotter than the Ryzen 5000 series, so it’s highly recommended to go for dual fan air coolers or AIO with a minimum of 240mm radiator arrangement. 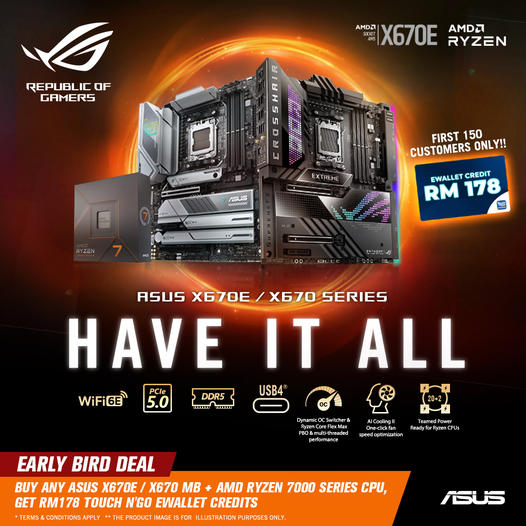 For those who are interested, ROG is currently having a campaign for their ROG X670E series. Head on over to their official facebook page for more information.

For the AMD EXPO™ Certified Kingston RAMs, check out their official website here.