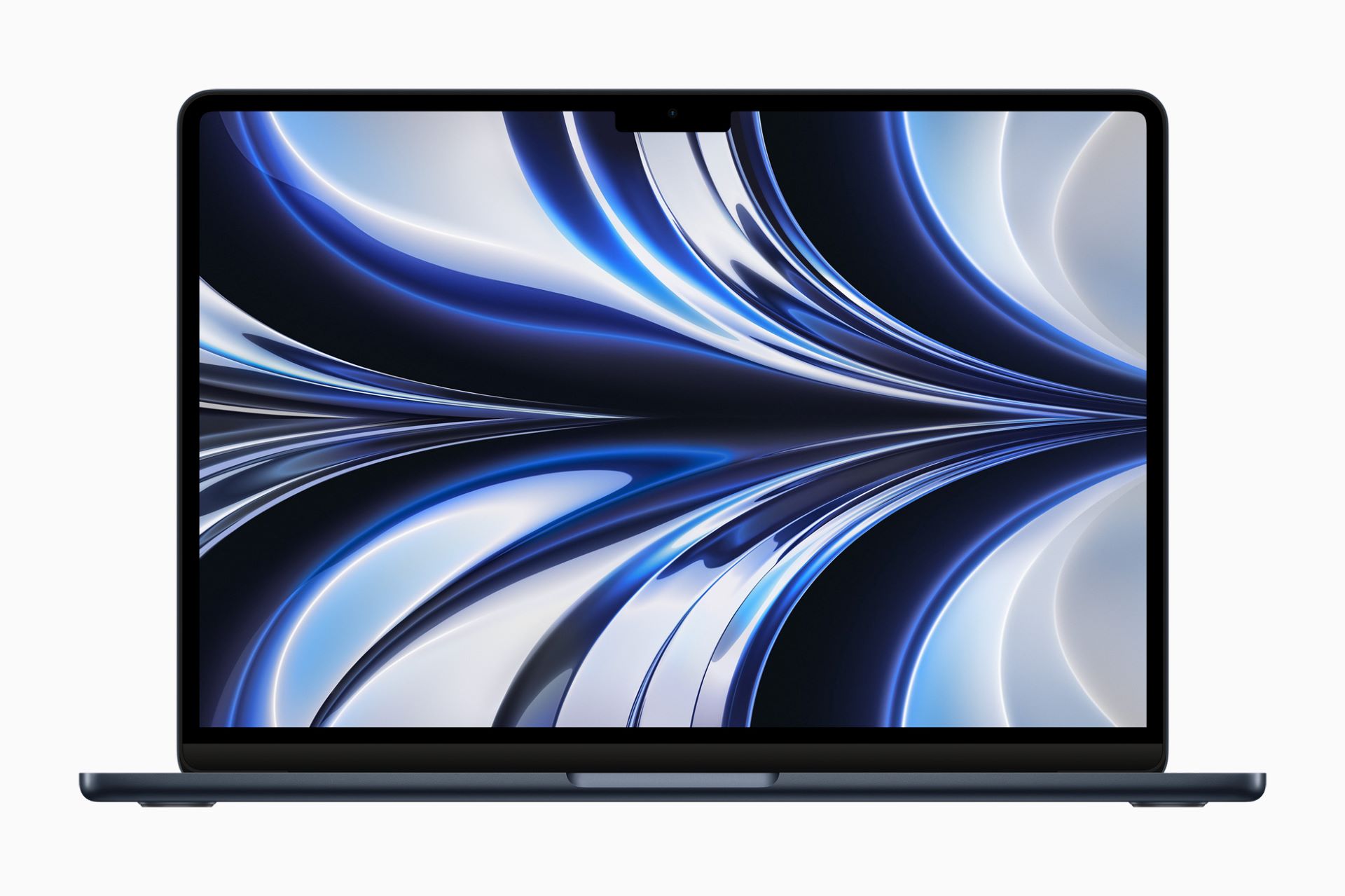 Apple today introduced a completely redesigned MacBook Air and an updated 13-inch MacBook Pro, both powered by the new M2 chip — which takes the breakthrough performance and capabilities of M1 even further. MacBook Air takes everything users love about the world’s best-selling laptop to the next level. With an all-new, strikingly thin design and even more performance, MacBook Air also features a larger 13.6-inch Liquid Retina display, a 1080p FaceTime HD camera, four-speaker sound system, up to 18 hours of battery life,1 and MagSafe charging. It is now available in four finishes — silver, space grey, midnight, and starlight. M2 also comes to the 13-inch MacBook Pro, the world’s second best-selling laptop — delivering incredible performance, up to 24GB of unified memory, ProRes acceleration, and up to 20 hours of battery life,2 all in a compact design. The new MacBook Air and updated 13-inch MacBook Pro join the even more powerful 14- and 16-inch MacBook Pro with M1 Pro and M1 Max to round out the strongest lineup of Mac notebooks ever offered.

“We’re so excited to bring our new M2 chip to the world’s two most popular laptops — the MacBook Air and 13-inch MacBook Pro,”

“Completely redesigned around M2, MacBook Air is thinner, lighter, and faster with a bigger display, better camera, and all-day battery life, in four beautiful finishes. Only with Apple silicon can you build such a thin and light notebook with a fanless design, and this combination of performance and capabilities. M2 also comes to the 13-inch MacBook Pro, featuring incredible performance, ProRes acceleration, up to 24GB of memory, and up to 20 hours of battery life — making our most portable pro notebook even better.”

M2 starts the second generation of Apple’s M-series chips and extends the remarkable features of M1. With industry-leading power efficiency, a unified memory architecture, and custom technologies, this new chip brings even more performance and capabilities to Apple’s most popular Mac notebooks — the MacBook Air and the 13-inch MacBook Pro. M2 features a next-generation 8-core CPU with advancements in both performance and efficiency cores, along with Apple’s next-generation GPU, which now has up to 10 cores — two more than M1. M2 delivers 100GB/s of unified memory bandwidth and supports up to 24GB of fast unified memory, so it can handle even larger and more complex workloads with ease. Designed to dramatically speed up video workflows, M2 also adds a next-generation media engine and a powerful ProRes video engine for hardware-accelerated encode and decode, so systems with M2 will be able to play back more streams of 4K and 8K video than before.

Built from the ground up around M2, MacBook Air has an entirely new design that is remarkably thin from every angle. It measures just 11.3 mm thin and is only 2.7 pounds, and features a durable, all-aluminium unibody enclosure that feels incredibly solid and is built to last. This thin and light design integrates its components so efficiently that it results in an astonishing 20 percent reduction in volume. With the power efficiency of M2, all of the capabilities of MacBook Air are built into a silent, fanless design. In addition to silver and space grey, MacBook Air is now available in two new finishes — midnight and starlight.

MagSafe returns to MacBook Air, giving users a dedicated charging port that is easy to connect, while protecting MacBook Air when it is plugged in by quickly releasing if the charging cable is accidentally pulled. MacBook Air also features two Thunderbolt ports for connecting a variety of accessories, and a 3.5 mm audio jack with support for high-impedance headphones. Additionally, the Magic Keyboard features a full-height function row with Touch ID, and a spacious, industry-leading Force Touch trackpad.

The new MacBook Air features a gorgeous 13.6-inch Liquid Retina display, which has been expanded closer to the sides and up around the camera to make room for the menu bar. The result is a larger display with much thinner borders, giving users more screen real estate to view their content in brilliant detail. At 500 nits of brightness, it is also 25 percent brighter than before. In addition, the new display now supports 1 billion colours, so photos and movies look incredibly vibrant.

MacBook Air includes a new 1080p FaceTime HD camera with a larger image sensor and more efficient pixels that deliver twice the resolution and low-light performance of the previous generation. Combined with the processing power of the advanced image signal processor on M2, users will look great on video calls.

MacBook Air also features a four-speaker sound system. To fit inside such a thin design, the speakers and mics are completely integrated between the keyboard and display — all while delivering an even better audio experience. A three-mic array captures clean audio using advanced beamforming algorithms, while the speakers produce improved stereo separation and vocal clarity. MacBook Air also supports immersive Spatial Audio for music and movies with Dolby Atmos.

Even More Performance in MacBook Air

M2 takes the performance of MacBook Air even further.

MacBook Air offers a number of charging options, including an all-new 35W compact power adapter with two USB-C ports, so users can charge two devices at once. And for the first time, MacBook Air supports fast charge for charging up to 50 percent in just 30 minutes with an optional 67W USB-C power adapter.7

Users love the performance the 13-inch MacBook Pro delivers in its compact design. Now with M2, Apple’s most portable pro notebook gets even more capabilities in the same great form factor.

With macOS Monterey and Apple silicon, MacBook Air and the 13-inch MacBook Pro deliver even more performance and productivity for users. Continuity tools like Universal Control make it easy for users to work effortlessly across Mac and iPad, while AirPlay to Mac enables users to play just about anything from their iPhone or iPad right to their Mac’s stunning Retina display. FaceTime includes audio and video features, including Portrait mode and Spatial Audio that make calls feel more natural and lifelike, while SharePlay enables Mac users to have shared experiences through FaceTime.14 Live Text and Visual Look Up use intelligence to surface useful information, Safari includes powerful tab organisation with Tab Groups, and Shortcuts brings the ease of automation to the Mac.

Better for the Environment

Both the new MacBook Air and 13-inch MacBook Pro minimise their impact on the environment, now using 100 percent recycled rare earth elements in the enclosure magnets. MacBook Air uses 100 percent recycled aluminium in its enclosure and is the first Apple product to use certified recycled steel. Both products meet Apple’s high standards for energy efficiency, are free of numerous harmful substances, and use wood fibre in the packaging that comes from responsibly managed forests. Today, Apple is carbon neutral for global corporate operations, and by 2030, plans to have net-zero climate impact across the entire business, which includes manufacturing supply chains and all product life cycles. This means that every Mac Apple creates, from design to manufacturing, will be 100 percent carbon neutral.