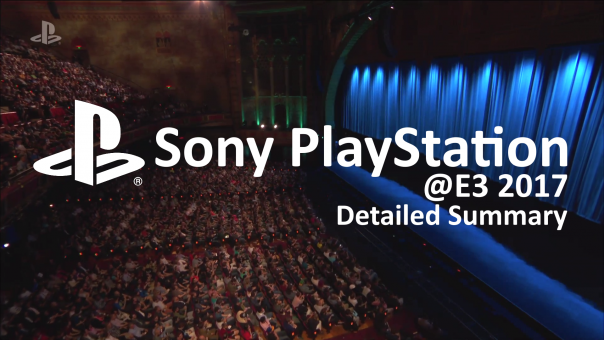 The Sony PlayStation conference started with an artistic touch, a band of 5 talented instrumentalist sat down and played some calm yet mysterious feeling Indian styled music. As their strumming and beats intensified, the dark screen behind them lit up, showing patterns seemingly flowing downward like water in a waterfall. As the line and patterns flow, some symbols begin to appear. A bow, an Axe, a Trident and a funny looking Medallion. The bigger screen then fades in to show the gameplay of Uncharted Lost Legacy!!!! Wooohoooo, not gonna lie tho, I thought it was Tomb Raider at first. The resemblance was uncanny!

Right after Uncharted Lost Legacy, Sony wasted no time to bring in another big cow they intend to continue milking. We present juuuu! Horizon Zero Dawn The Frozen Wild!

After showing us the bad boi, the President & CEO, SIEA and Chairman of SIE Worldwide Studios, Mr Shawn Layden took the stage to say some thanks and appreciation to everyone. It was a brief appearance, the conference quickly moved on to show us more games. The next game shown was, Monster Hunter World!

Fans of Shadow of the Colossus assemble! Now tap your happy feets and rejoice! SOTC remake is coming to the PlayStation 4!

If anyone was looking forward to Marvel vs Capcom Infinite, know that the game is planned for release on the 19th of September this year. The Demo for its story is available for download now, so be sure to hit the PS Store to find it.

FPS fans say Heyyyyyy! Here is your treat for the day! Call of Duty World War 2 ! I know how long we’ve all longed for COD to come back to WW2, some of us are tired with all those wall crawling, jumping, running, gunning ala Crysis style for fucks sake. On a more personal note, I really love how the trailer presented the game, this is one of the rare occasion where I find COD’s trailer was better than Battlefield’s. Way to go COD! Keep it real! Coming on the 3rd of November! Say Hooooo!

After COD there was a short video showing the PSVR and from hereon is where the PSVR section starts. Starting with…. wait. You need to (seriously) go listen to THIS first before continue reading and watching whatever that comes next. I’m serious, GO.

Next up is Star Child VR! It didn’t look impressive at first but what the heck right? We’ve seen worse! Give a try maybe?

The Inpatient VR. Doesn’t ring a bell? *Morpheus Impression* What if I told you, The Inpatient VR is a prequel to Until Dawn? Ahhh… now its different eh? The game takes you to a mental asylum (oh how exciting!) where crazy people like you and I actually belonged!

Remember Final Fantasy XV? Before Final Fantasy XV was launched, they showed a VR gameplay on how you could play as Prompto right? You get to shoot at shit and what not right? Wellllllllllll Nope. That is not happening now. You still get to experience FFXV in VR tho, but only to go fishing. Yes, fishing, in Final fishing Fantasy XV. That’s right man, because fishing is definitely more fun than shooting or any other stuffs in FFXV. They could have made a fucking Chocobo Race VR to repay their fans! But No. You bloody fools like to fish don’t you? F…ish you!

Bravo Team VR was shown after FFXV fishing frenzy, this is a VR FPS game and looked like its action filled too!

The last VR game shown in Sony’s PlayStation conference was Moss by Polyarc. In this game you play as Stuart Little going on an adventure!

From hereon, all the games are not VR-able. We are back to more game announcement and release. Next up is God of War (YesssssS) and it looked genuinely beautiful and amazing, the game is set for launch in early 2018 so get ready to whooop some ass~
This is a 5 and a half minute long gameplay video shown in the E3, so feast your eyes.

“Detroit : Become Human” was next and it looked like this game have some amazing plot behind it. I definitely look forward to this one.

One of the last but not least mentioned was Destiny 2, arguably one of the most anticipated game for this year. You can see Gary in the video or maybe its not him, I don’t know but I’ll see him when the game launch.

Finally, the last game Sony showed in this conference was Spiderman. I don’t know what to say about this, but the gameplay video actually looked fantastic. P.s I don’t like Spiderman.

So yes that is all, 17 games totally. It is worth noting Sony did not cover much on Indie titles this year like they usually do in the previous conferences. This year’s Conference from Sony also (in my opinion) lacked their usual confidence and charisma. There was no mention of any new hardwares, upgrades, new services and only Shawn Layden made an appearance, we did not see Andrew House or Shuhei Yoshida, so to be honest it feels kinda weird.

For the past few years Sony would give the stage to developers to announce or showcase some gameplay videos whereas this year everything seemed rushed for some reason.

I must emphasize this however, these 17 games mentioned were ONLY part of their press conference. Its not the entire package Sony brought to the E3. Apart from the conference, Sony is also livestreaming plenty of gameplay videos and demos that are not mentioned in the conference and you can check them out here at Live.PlayStation.com. The stream schedule is packed with games so be sure to check it out! **Editor’s Note** Videos embedded in this article does not belong to us. All videos belong to their rightful owner as named when you click on the video title. Proper credits will be given in due time. This article was done in a rush!