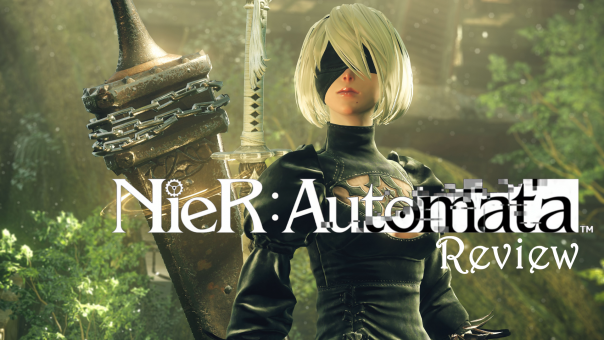 NieR Automata is probably one of the most unique game I’ve played and I say so for many good reasons. It took me 40 hours to finish the game entirely (with all main endings) and it left such a huge impact on me. The way the game tells its story is simply breathtaking but you need to sit through all relevant playthroughs to really understand the true beauty of this game. Now when I say “Playthrough” I don’t just mean repeating the same thing over and over again, NieR Automata lets you play the subsequent playthroughs from a different perspective and even one with an entirely different sets of mission than the first you played. I cannot explain too much without risking spoiling the game for you, but do believe me in this, you’d need to really go on even after you see the credits rolling the first and even the second time. You’d know what I mean when you reach there. 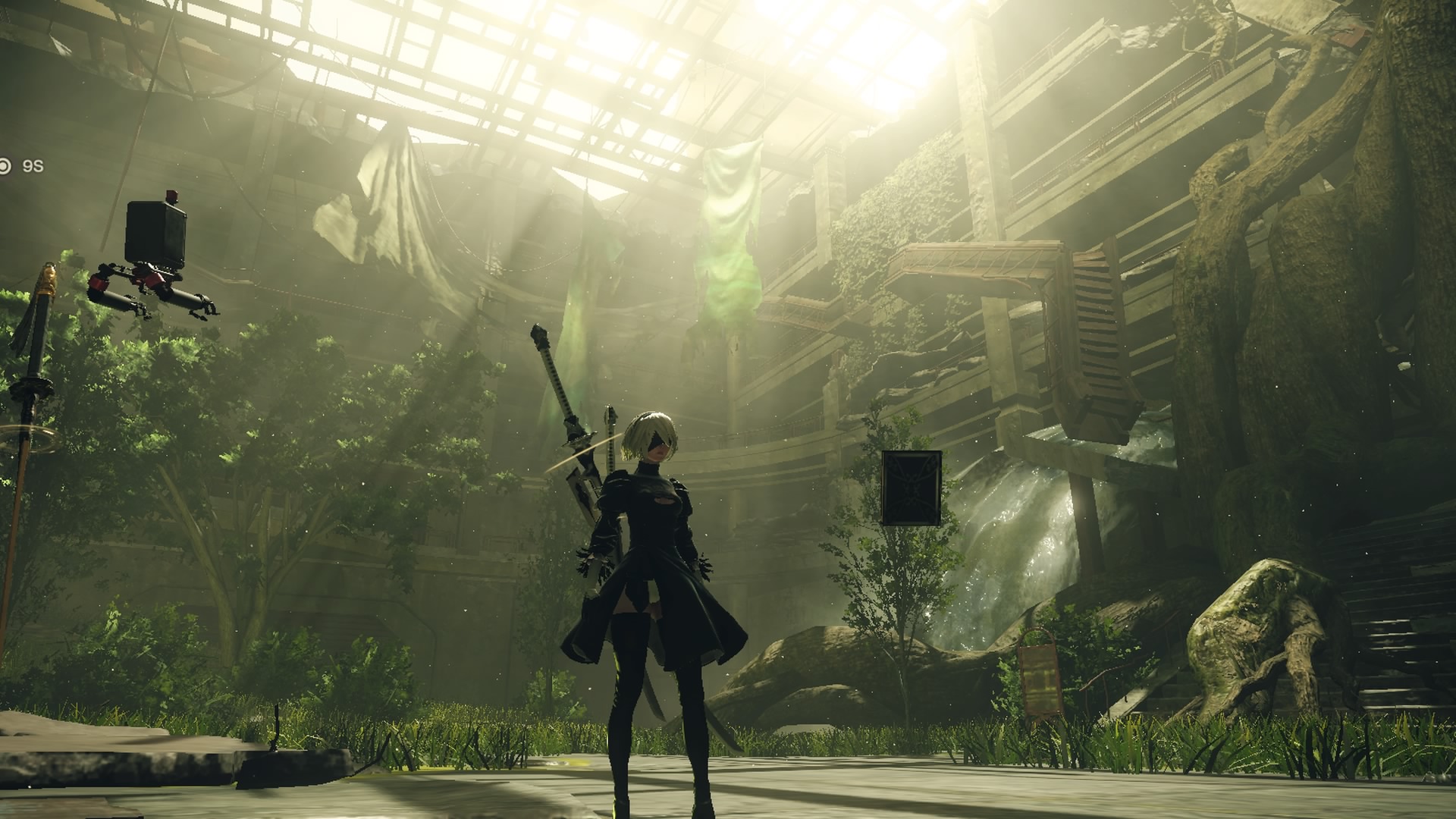 In NieR Automata, players start as the main heroine 2B, an Assassin class Android of the YoRHa Organization founded to defend humanity from Machine Lifeforms controlled by an extra terrestrial race. Together with a 9S android unit, you will set off to a now Machine infested planet Earth to restore the balance of power. Now before anyone of you wonder, NieR Automata is not exactly related to the original NieR, however there are some characters from the original NieR making cameo appearances in Automata. 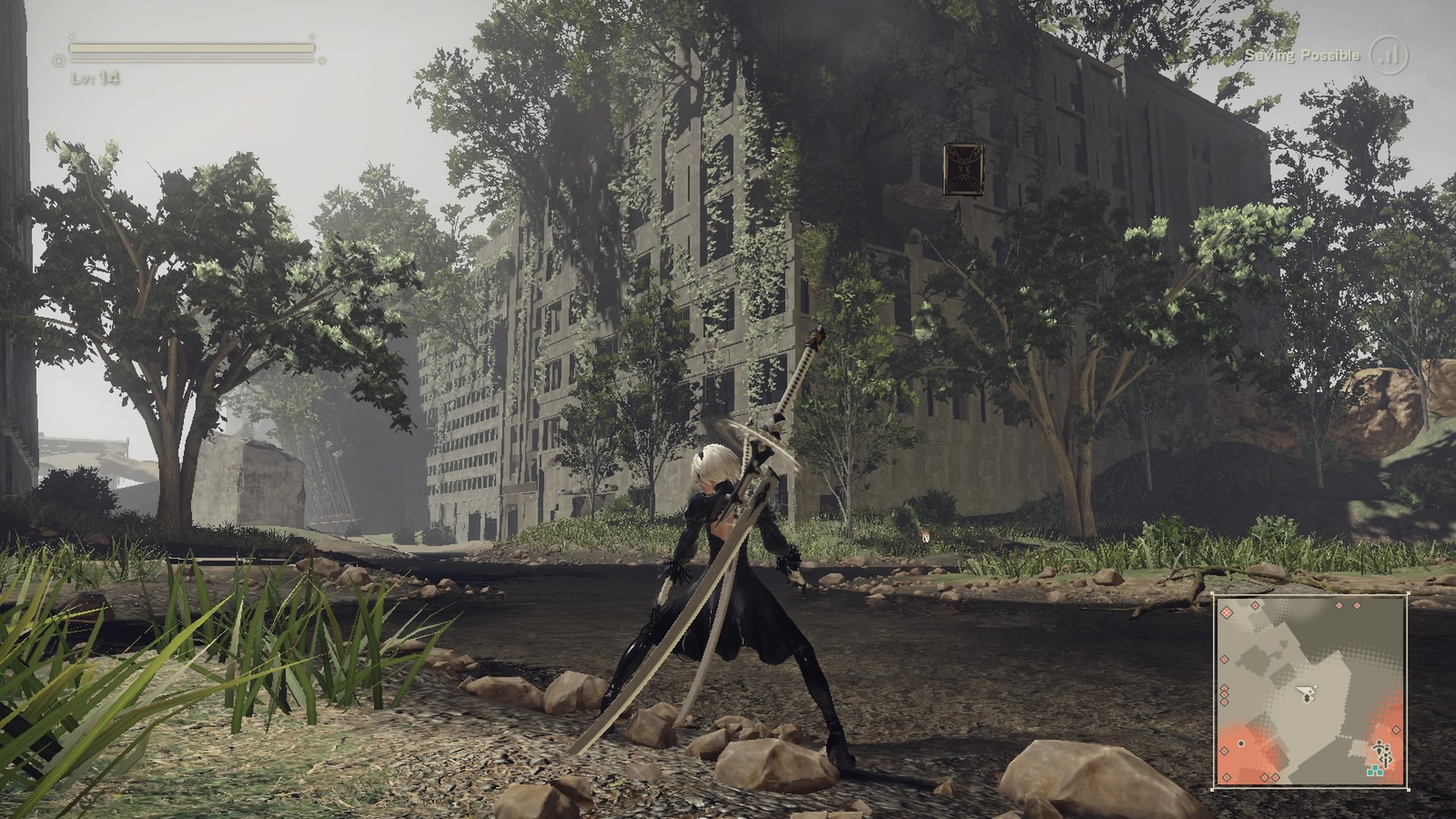 Graphics.
When it comes to graphics in NieR Automata, everything in this game looked very ordinary to be frank. The game however runs on 60 FPS on both consoles (Standard & Pro) with the difference being 900p for the standard PS4 and 1080p on the PS4 Pro . The map designs are rather generic and buildings (ruins) appeared to look like duplicates. They do however give a rather good impression on a post war themed setting. I’ve experienced some frame rates dipping during fights against a large group of enemies, not game breaking though and it rarely occurs. NieR Automata is not the best looking game out there so graphic enthusiast will find little attraction here but fans of fluid animation will definitely be pampered by its smooth 60 FPS wonder. 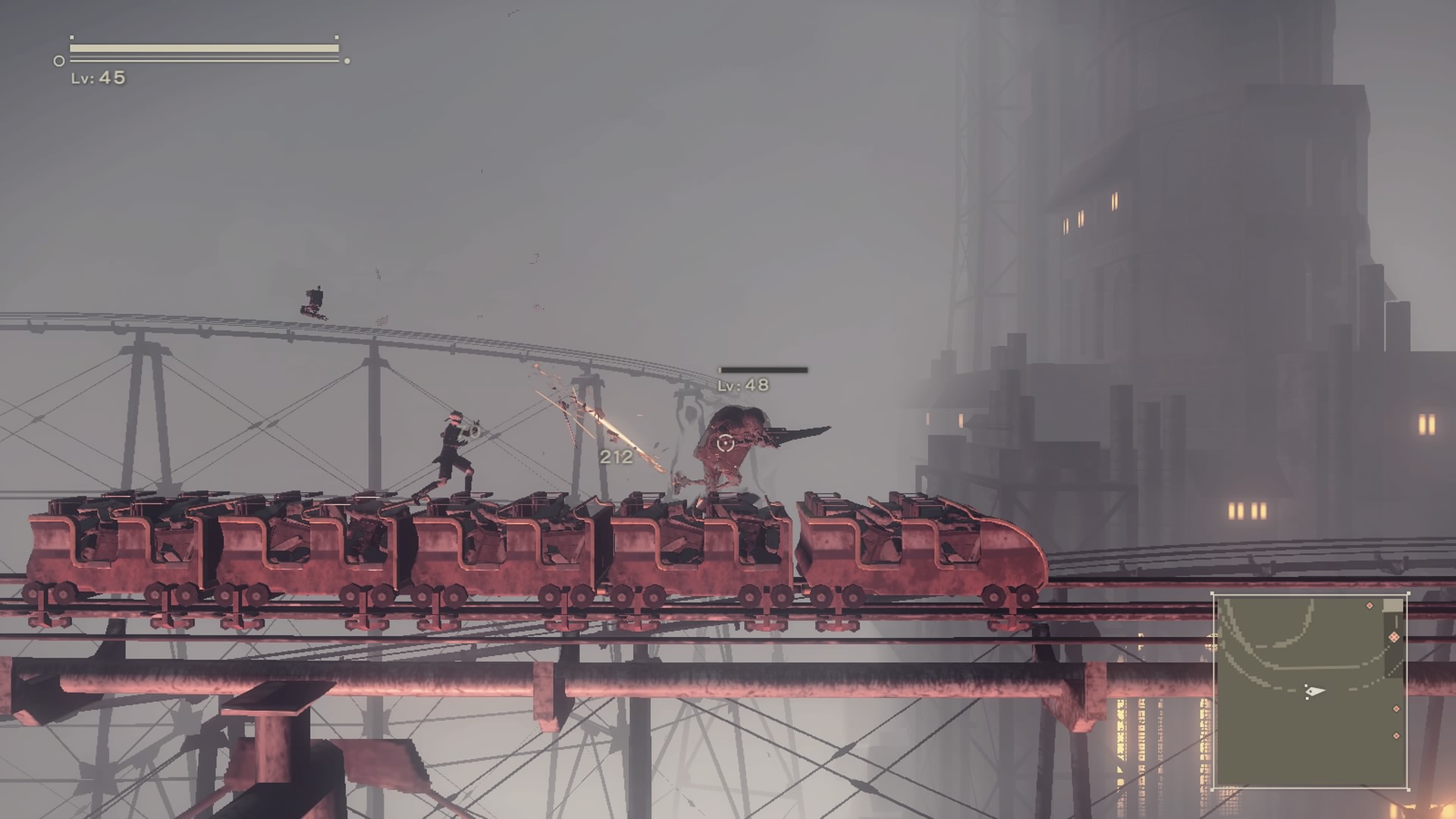 NieR Automata also changes its camera angle and perspective depending on which portion of the game you are playing. Players will get to enjoy the game from a third person view, birds eye view, and side scrolling view. Older gamers would appreciate the nostalgia it brings and how it reminds us of our times.

Excellent. I cannot praise this game enough for what it has to offer sound track wise. From the good sound effects which greatly enhance the feeling of intensity during combat to the marvelous background music. The sound tracks in this game are superb! They even prepared a Jukebox in the game for your to visit and listen to your favorite tracks! Now thats not all, they even allow you to choose what mode you wish to listen to those sound tracks on, maybe you like a more Dynamic theme? Normal? Or would you prefer it to play a version without vocal? Or with? Music is one of their bragging rights and they know it alright. The original sound track CD is definitely on my “Must Buy!” list. The only complain I have is the game not allowing us to choose what track we wish to play as we journey through the game, you can only choose which track you want near the Jukebox. How I wish they had something like the Mp3 player function in Final Fantasy XV where we can play any music we want while on the move. 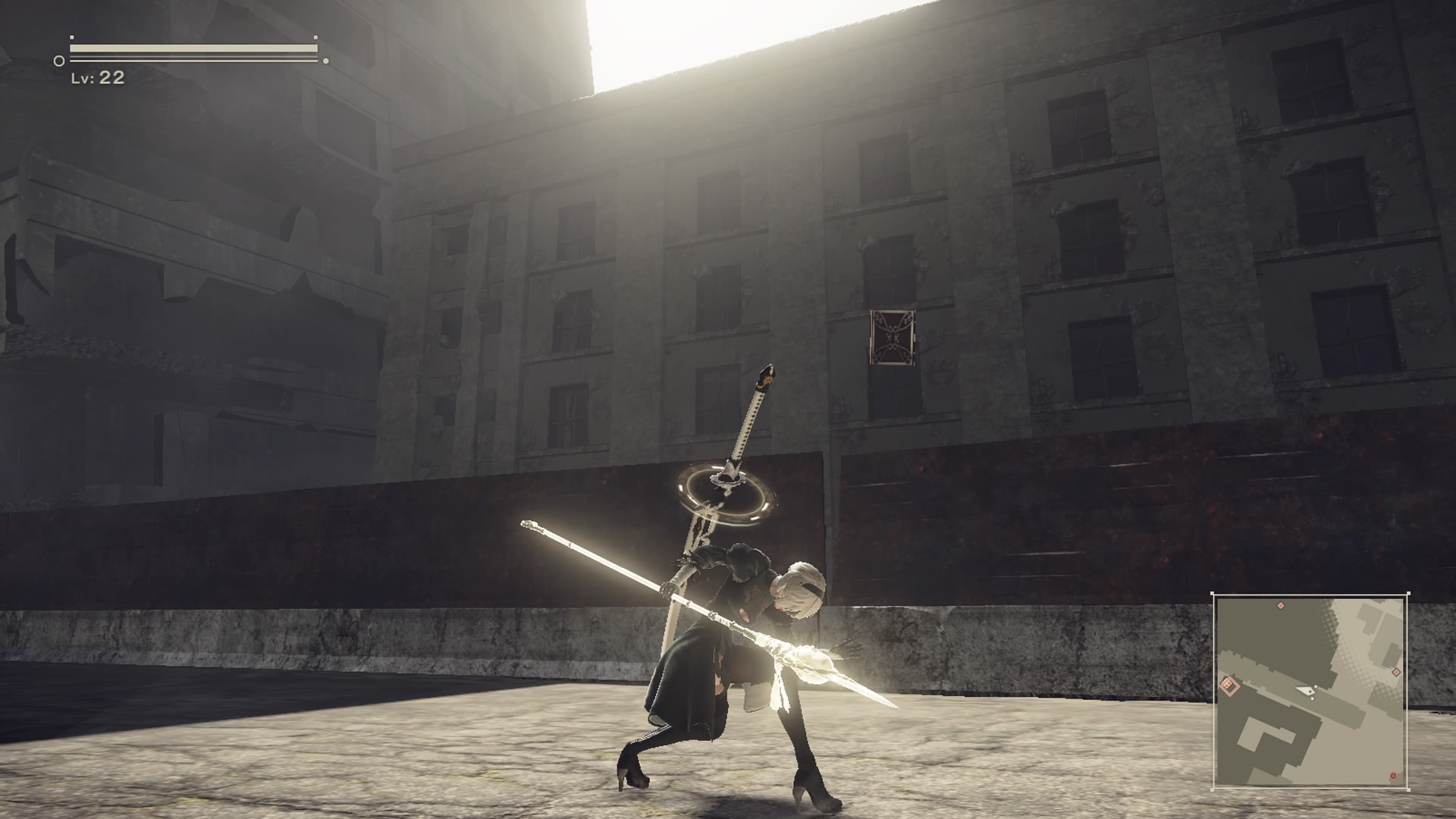 Weapons + Combat mechanics.
Fighting in this game is a beauty, players have a good parameter of freedom to choose how they wish to engage a fight. Be it pure aggressiveness armed with heavy weapons going for the bash and smash or the agile type perfectly timing their dodges to counter attack with quick swinging small swords and spears or maybe you are the chicken type who likes to run in circle while shooting at them with your Pod(s). You are given the freedom to choose a playstyle that suits your combat preferrences. This is one of the aspect I love the most in NieR Automata.

I’ll explain how the weapons work, I mean obviously you’d use them to whack your enemies but weapons also contribute to different combo sets in NieR Automata. As the main prontagonist 2B, you get to arm yourself with 2 weapons (excluding Pod). One for light attacks and one for heavy attacks. You are free to equip a Heavy Sword on the Light Attack slot and vice versa a Small Sword into the Heavy Attack slot. Different weapons into different slots will trigger different combo sets. Weapons can be refined in this game to enhance their stats and add perks to it. You get to prepare 2 sets of weaponary which enables you to switch instantly to the set containing the 2 weapons you desire during combat.

A Pod is your mechanical companion. They provide different types of support throughout your game including during combat. They are extremely useful if you know how to utilize them efficiently.

Combat as a whole, NieR Automata is a hack and slash game. Although there are more forms of “combat” unlocked after you completed your first playthrough, but overall it is still heavily rooted in hacks and slashes. You cannot parry or block an attack however if you timed your dodge perfectly, your character can counter attack. Combat is extremely smooth in this game and combos are amazing to execute. Overall, I was very satisfied with how combat plays out in NieR Automata, it is afterall the most attractive part of the game in my opinion.

Character Upgrades.
Character upgrades in this game comes in the form of “Chips” (microchips) . You unlock as many chip slots as you can and you equip your character with the relevant chips befitting your playstyle. There is a good variety of them to choose from. You can even fuse chips of the same type and grade together to obtain better effects. The process is not too complicated , simple yet not too easy that it makes your character over powered easily. I had much fun customizing my character upgrades via this system . It is also worth noting that these chips can be taken out and replaced anytime with no loss or repercussion. 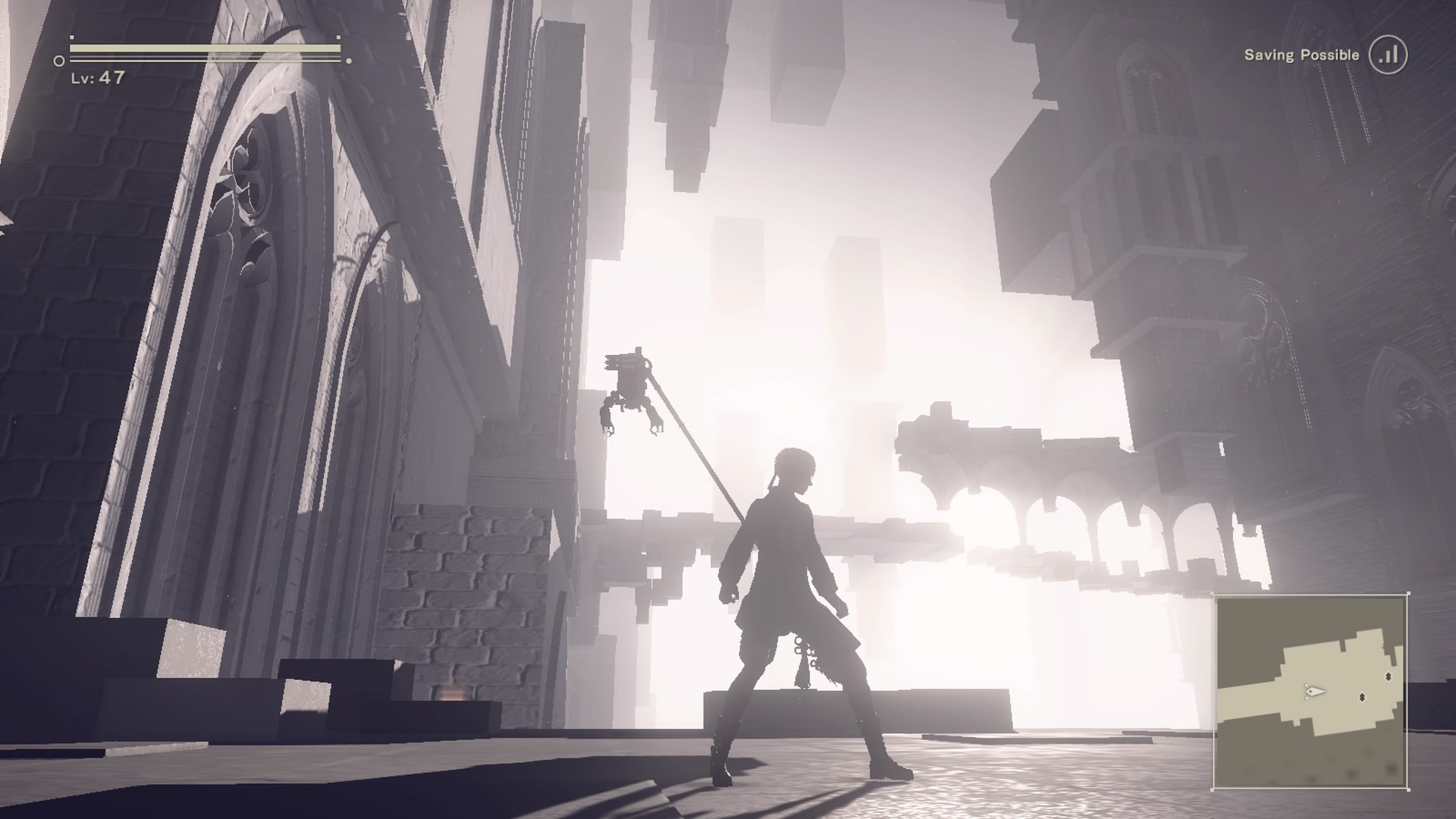 Storytelling is one of this game’s most impressive area and instead of endless dialogues like typical JRPG games, NieR Automata adopted several methods to convey their messages and if you really takes the time to watch and read, you’d understand where the hidden beauty in this game lies. I really appreciate the thoughts and efforts they have given in writing such a powerful script and I’m not just talking about sensational writing. You would quickly come to realize how this game have embedded so many elements, philosophical in nature into their work. Usually people would fail when combining Philosophy and Action together, not many of them found success. They were either too “Dilly dally” in nature or too one sided to the brute side. Platinum Games however found the right combination and have successfully set a new standard on how a Slash n Hack game too, can be so rich and enlightening in its story.

If you are one who likes to skip through every words and dialogues, you risk losing out half of the game’s content. Dialogues and Words are minimal in this game so don’t worry, their value however is substantial. They form a huge part of the game in helping you understand why things are how things are. 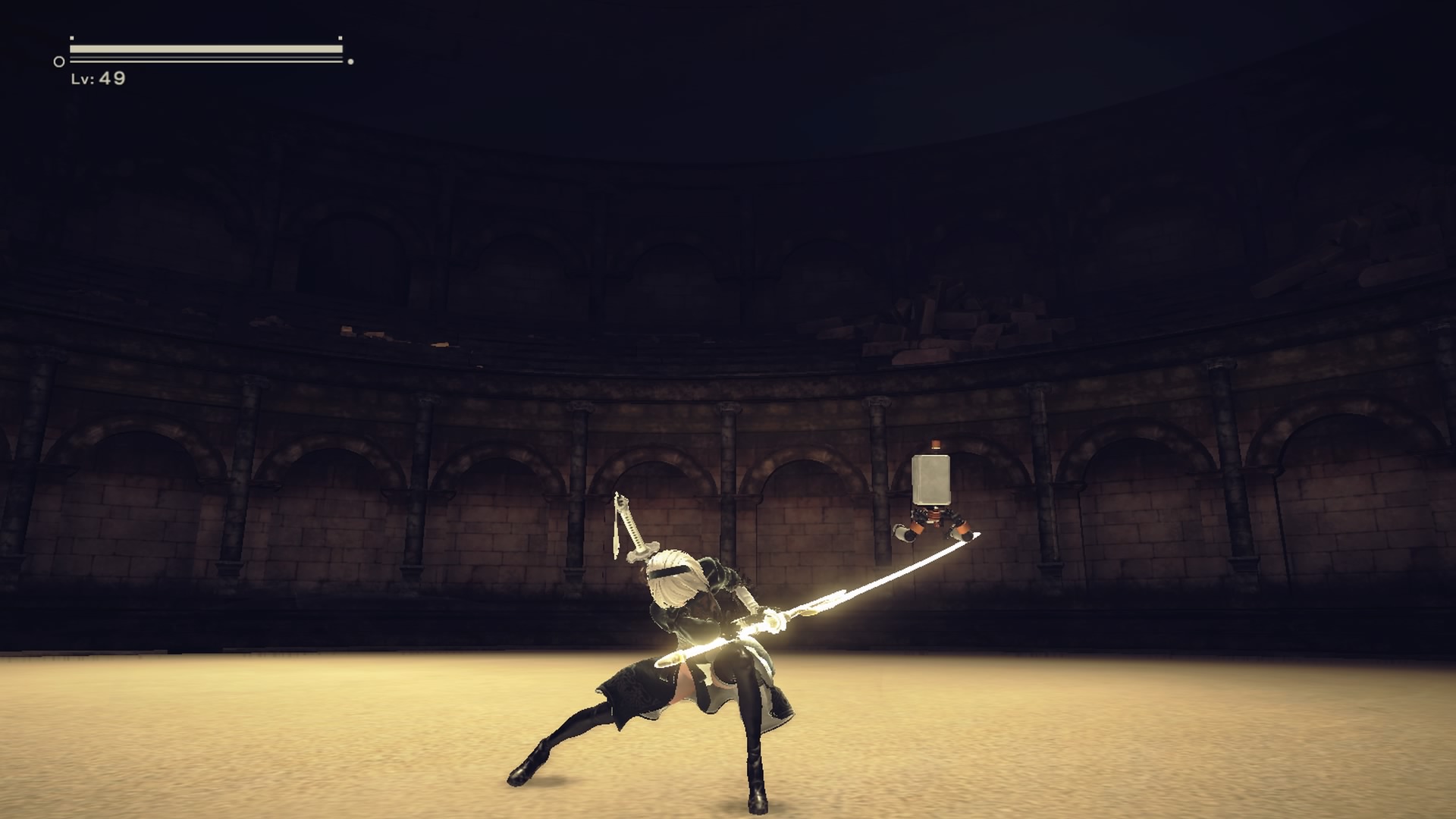 How I find this game.

Cons –
1) Frame Rates dipped during fight against large group.
2) Found a glitch during one of the boss fight that prevented me from progressing for 3 hours.
3) Encountered a screen freeze once , had to restart the game.
4) Easy to miss on important info if you are not reading through or listening properly.