Developed By: 4A Games

After spending the last two metro games shooting in the dark claustrophobic underground tunnels in Moscow, Metro fans like myself rejoice at the sight of our hero Artyom and his band of Spartan Rangers finally leaving the Russian capital for a new adventure somewhere else on the surface. Metro Exodus is inspired by the work of a Russian writer, Dmitry Glukhovsky, who created the Metro novel series that 4A Games’ Metro Games franchise is based on. Metro Exodus is based on Glukhovsky’s Metro 2035, the last book of the series.

For a series that prided itself as a good storyteller, Metro Exodus is no exception. The early part of the game is almost identical to the plot in the novel Metro 2035 when Artyom discovered a shocking truth about Moscow, and the impact it would have on everyone in the metro. From thereon, the rest of the game is based on the developer’s take on the game’s story. Exodus focuses on the quest to seek for a new habitable home on the surface, and it details the struggles and obstacles our hero and his company must endure in their journey.

I thoroughly enjoyed the plot of the game and how the story builds around not just the game’s main goal itself, but also on Artyom’s relationship with his Spartan Ranger comrades. I especially admire how the game manages to demonstrate the whole spirit of camaraderie between the group, the loyalty they have to each other which is greatly hinted as only possible after everything they have gone through together. There are scenes where they would come together to discuss matters, to play on their guitars and sing, to sit and eat together. It was all very heartwarming to experience, especially after a tough run in the open-world running into bandits and mutants.

It is noteworthy to those who are new to the series that Artyom does not speak in the game, you won’t even see his face even in cinematics. You’d only hear his voice when he narrates his own journal in between loading sections. And since conversations are always spoken one-sided, some players may find this a turn off as they might feel disconnected with the main character’s personality and mindset. Personally, I am fine with this. I actually enjoyed speculating on Artyom’s mysterious personality and the developer helped made it interesting by ensuring that conversations with the NPCs offer some hints or glimpses into Artyom’s past and recent actions or state of mind.

The story progression in Metro Exodus is paced between several chapters, each chapter takes place in a new map and ultimately, the collective outcome of each chapter would affect whether a player gets a good or bad ending at the end. What I didn’t know was, some of my comrades’ fate is also tied with the outcome of the chapters. Depending on how I approached my mission e.g – Killing enemies or knocking them out, accidentally killing innocent slaves – it would result in one of my spartan comrade retiring from my team or injuring themselves. And since I didn’t know about the hidden justice counter, I thought losing one of my comrades in one of the chapters was just a standard pre-fixed result from my progression. I would later find out about a different outcome when I checked the trophy list. I wish the game had kept me informed on the existence of such repercussions, it would at least encourage any desire to replay the game for a different outcome. 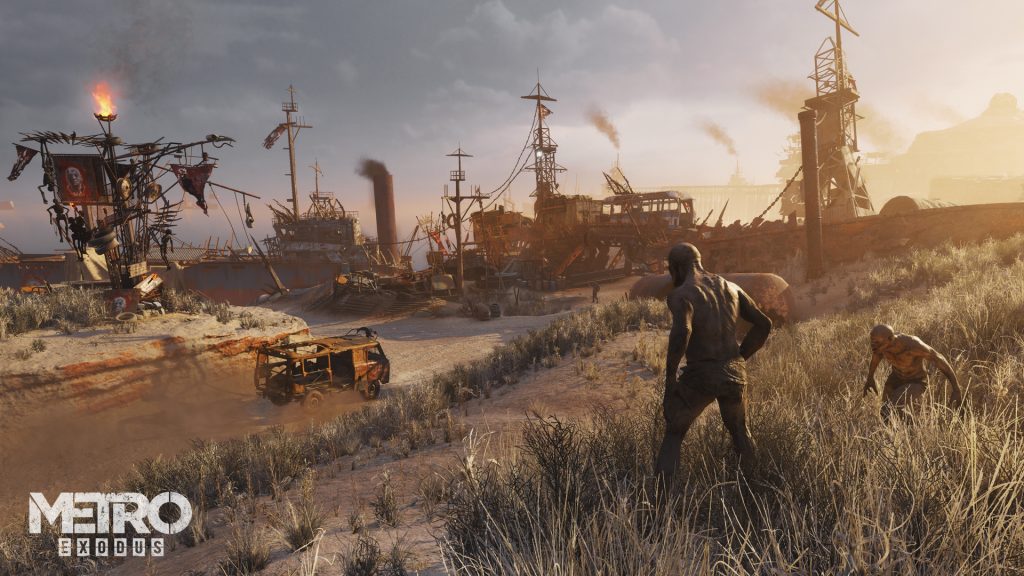 I am no fan of love stories but the chemistry between Artyom and his wife, Anna, remains the highlight throughout the entire game for me. To watch a husband and wife team taking on a mission together is surprisingly refreshing, especially the intimate tone when Anna occasionally cautions her husband to be careful as she watches his back through the scope of her Sniper Rifle from a distance. There are times when the love between them puts me as the player in a rather awkward and shy position, imagine holding a torchlight to a couple’s face when they are about to kiss in the cinema.

I really appreciate how the game portrays their love and the message it sends, that it is still possible to love and hope albeit the chaos that reigns across this radiated wasteland. Though sometimes I just hope Artyom would open his damn mouth and tells his wife he loves her too because he damn well should!

Traditionally, Metro games have always pitted the player in dark claustrophobic environments and then jump scare the shit out of them with a group of ugly mutants, which will then cause the players to shoot like Rambo. Except, they won’t hit anything. Out of ammo after that not so heroic act, they’d have no choice but to go scavenging for more ammo or make some themselves. Exodus is very similar in that essence. Shoot, Loot, Craft, Repeat. Nothing new, but nothing wrong.

Shooting mechanics in any Metro game is never great. This is not a “Destiny” type of shooter where you can expect buttery smooth controls and bullets hitting where your crosshair is aiming. Then again, the game is portraying an era after the nuclear war and everyone is running around with their rusty, clunky, old weapons that are way past their time. So a good excuse for the clunky shooting controls maybe? 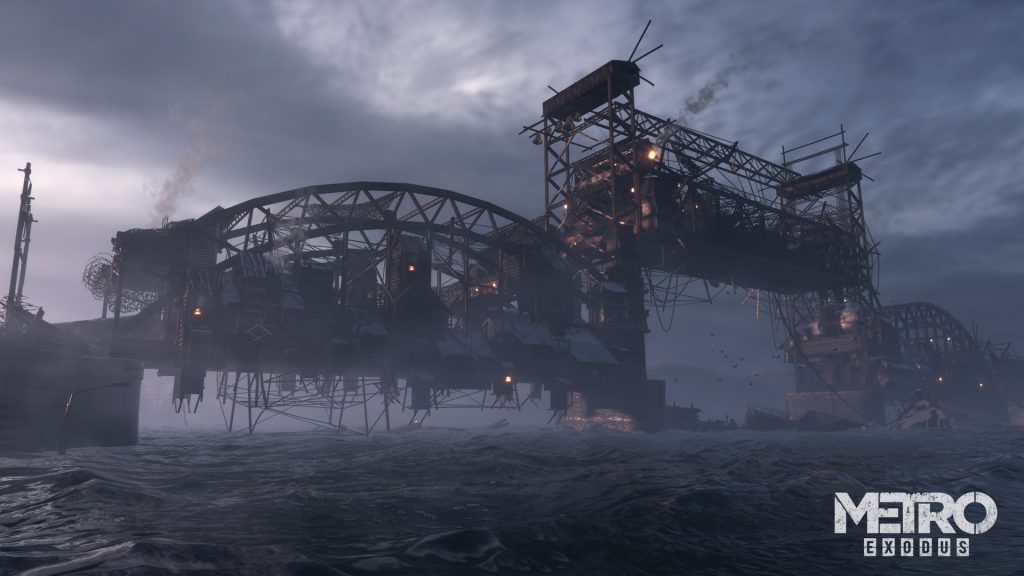 Let’s put it this way, Metro Exodus is not the best looking game out there but even so, it still holds its own pretty well compared to other current-gen titles. The human NPC design in this game is amusing (to me at least). This is because depending on where you are in the game, the human NPCs you encounter can either look like folks from Mad Max Fury Road or the natives in Horizon Zero Dawn, I’m not even joking. Mutants look reasonably good I guess, but since I was too busy shooting at them most of the time, I can only say so based on their dead bodies. I don’t really remember how a live one looks like.

Zooming out to the open-world, one of the areas that impressed me the most in this game is the realistic portrayal of the winter environment. There is just something eerily elegant about nuclear ruins in winter that 4A Games managed to paint out. But other than that, visually, the open-world didn’t impress me too much with its mostly barren landscape, but then again, there isn’t much I can expect from a post-nuclear holocaust environment either – Fair enough. If anything was standing between your gun and the wall, muzzle flashes from firing a gun will now produce shadows, giving a pinch of realism in conflicts fought in dark places. Weapons look good and detailed in design but this is to be expected for any first-person based Shooter RPG.

There are some lip syncing issues when the NPC talks, but I was told the problem is less obvious if I was using Russian in my audio setting. I don’t actually mind playing it in Russian as long as I can read the subtitles in English, but unfortunately, my copy of the game didn’t come with the Russian language pack. During my entire gameplay, I did not encounter a single instance where my framerates were dipping, I can only conclude that the game is optimized really well on the PlayStation 4. This is one of those games that you should play on your headset rather than relying on TV speakers or any external speakers. If you have a Netflix account, you’d be familiar with what I’m about to say. Speech volume is too low but gunfights will blast your eardrums out, so unless you want to wake everyone in your house up during your Rambo moments, please wear a headset. Another reason why you should do it is so that you can truly immerse yourself with the sound effects the game has, which are barely noticeable if you rely on TV speakers. After all, this is a survival horror game, you wouldn’t want to miss any early warnings in the form of mutant groans and moans as they can be the difference between life and death. Audio feedback from firing your weapons are good but most developers have already got this part right and polished, so Metro Exodus is just meeting the expectations here, nothing that “wow” worthy.

Let’s talk about music – Tarak, Mou, Bo, No, Non, Nein, Net – That’s about all the words in different languages I know that says No. There is no memorable music in this game.

Voice Acting. Let me just draw some comparison with what another game did. In the Action RPG game Sleeping Dog that took place in Hong Kong, every character inside spoke with an American accent, and even when they are speaking in Cantonese (Chinese) it still sounds as if a western Non-Chinese speaking dude was forcing his way to talk in Chinese (there’s nothing wrong with that at all, Sleeping Dog still turned out to be one of the best I’ve played). But in Metro Exodus, even when the game is played with English selected as the audio, the conversation still sounds like a bunch of Russian people speaking English with the Russian Accent. Now, when you combine that element with a well-written dialogue script that is performed by a squad of really talented voice actors, what do you get? A great storytelling experience that is easy for anyone to submerge themselves into.

Would I recommend this game to my friends? I’d speak fondly about this game and recommend it for its story but I’ll also make it clear that the gameplay is nothing to shout about. In fact, if you have not played any Metro games before you may have a hard time settling in due to its almost primitive controls and hard to aim settings. The main attraction in Exodus lies in its storytelling, presentation, and the fact that it was inspired by Metro 2035, the last of the Metro Novel series by Dmitry Glukhovsky. For Metro fans who need closure, Exodus is a must play. For those who are new to the series, I’d recommend you try out Metro 2033 and Metro Last Light first because then it’d make more sense for you.