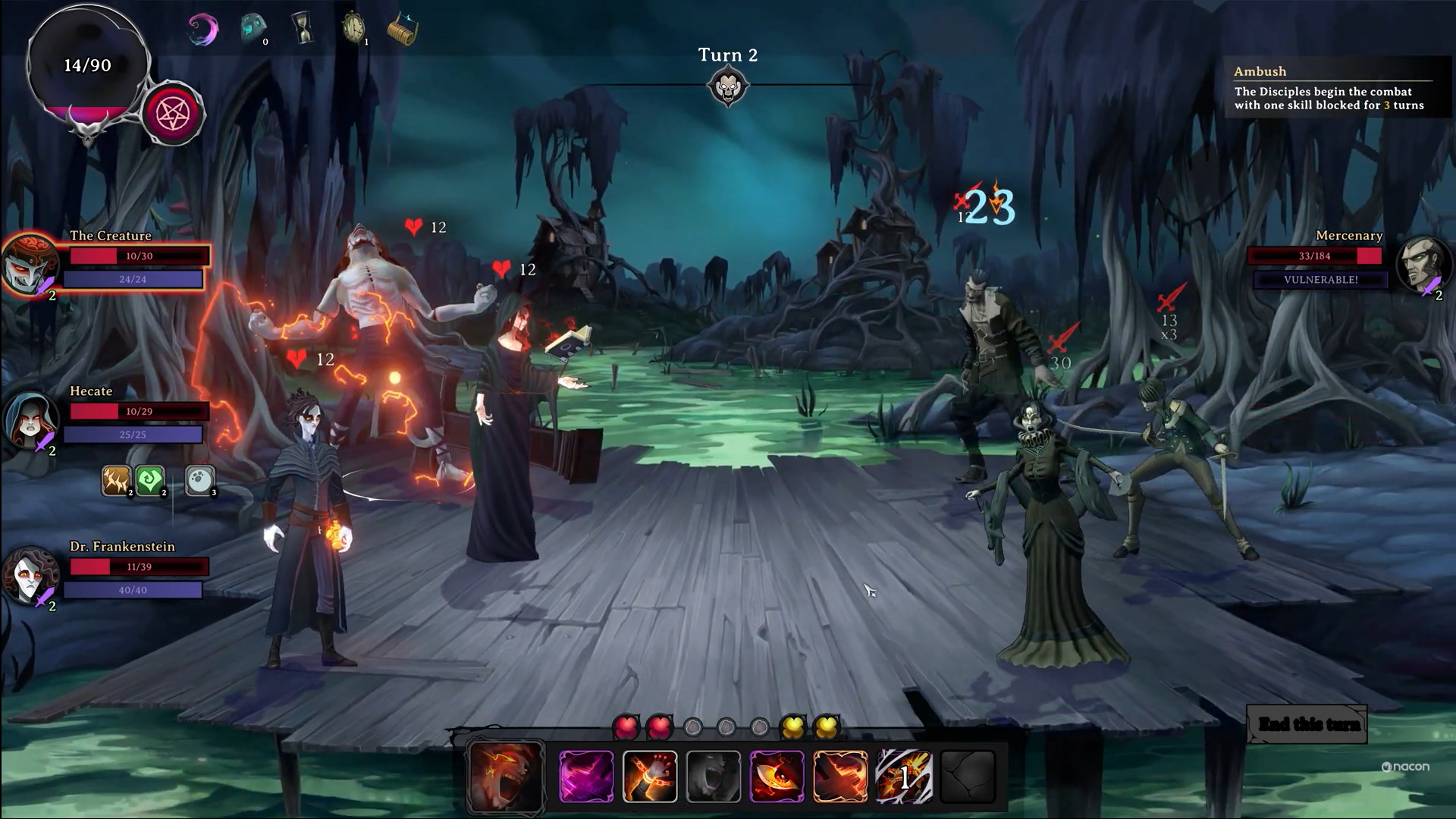 In Rogue Lords, Cheating is part of the game

The Devil makes his return in Rogue Lords, the turn-based roguelike developed by Cyanide and Leikir Studio. Published by NACON, the game is available now on PC via Steam and the Epic Games Store. Rogue Lords takes players to a dark and mature world inspired by 18th century New England and the Salem witch trials. You play as the Devil. You have returned to the human world to take revenge against the Demon Hunters who subjected you to a heavy defeat 10 years ago.

Build your team from 9 infamous evil geniuses – Dracula, the Headless Horseman, Bloody Mary, The White Lady, Lilith, Hecate, Baron Samedi, and Frankenstein and his Creature are all available to serve you. Use the special talents of each Disciple, combine their powers to create devastating attacks, and defeat the members of the Sanctua Lumen, a new cult hunting down your followers.

A roguelike with deep gameplay and unique mechanics – During each run, you will build a team of three Disciples, progress through the game on a 3D map and choose the events you want to trigger. This includes:

Fights and events offer a choice of rewards, but you need to select them carefully based on your tactics.

Do you want to support the forces of Hell even more?#RogueLords will have a Blood Moon Edition (digital only) which includes:

🧛‍♂️ The Base Game
🪡 3 Exclusive skins for Dracula, Bloody Mary and the Headless Horsemen
🎶 The OST
🎨 A 68-page Digital Artbook pic.twitter.com/P2Fw5yfITY

Use the Devil’s powers to play by your own rules – In exchange for some of your own health, bend the rules in your favour. For example, you can alter the health bars of your Disciples and enemies, swap buffs and debuffs to suit your fighting strategy, open portals on the map to reach inaccessible areas, or even tip the odds in your favour during interactive events. Mastering this mechanic is essential for crushing your enemies at key moments. But be careful: there’s a cost, and losing all your health will bring your run to an end.

The Devil does not know the meaning of defeat – The turn-based battles are challenging and require mastery of the various gameplay mechanics. Your enemies are many, determined and well-trained. Luckily, the Devil plays by his own rules: acquire new skills, unlock new Disciples and return run after run until you impose your rule over all mortals.

Play as the Devil, find artefacts with legendary powers and regain your former strength to take revenge on the Demon Hunters in Rogue Lords, a roguelike in which cheating is part of the game.