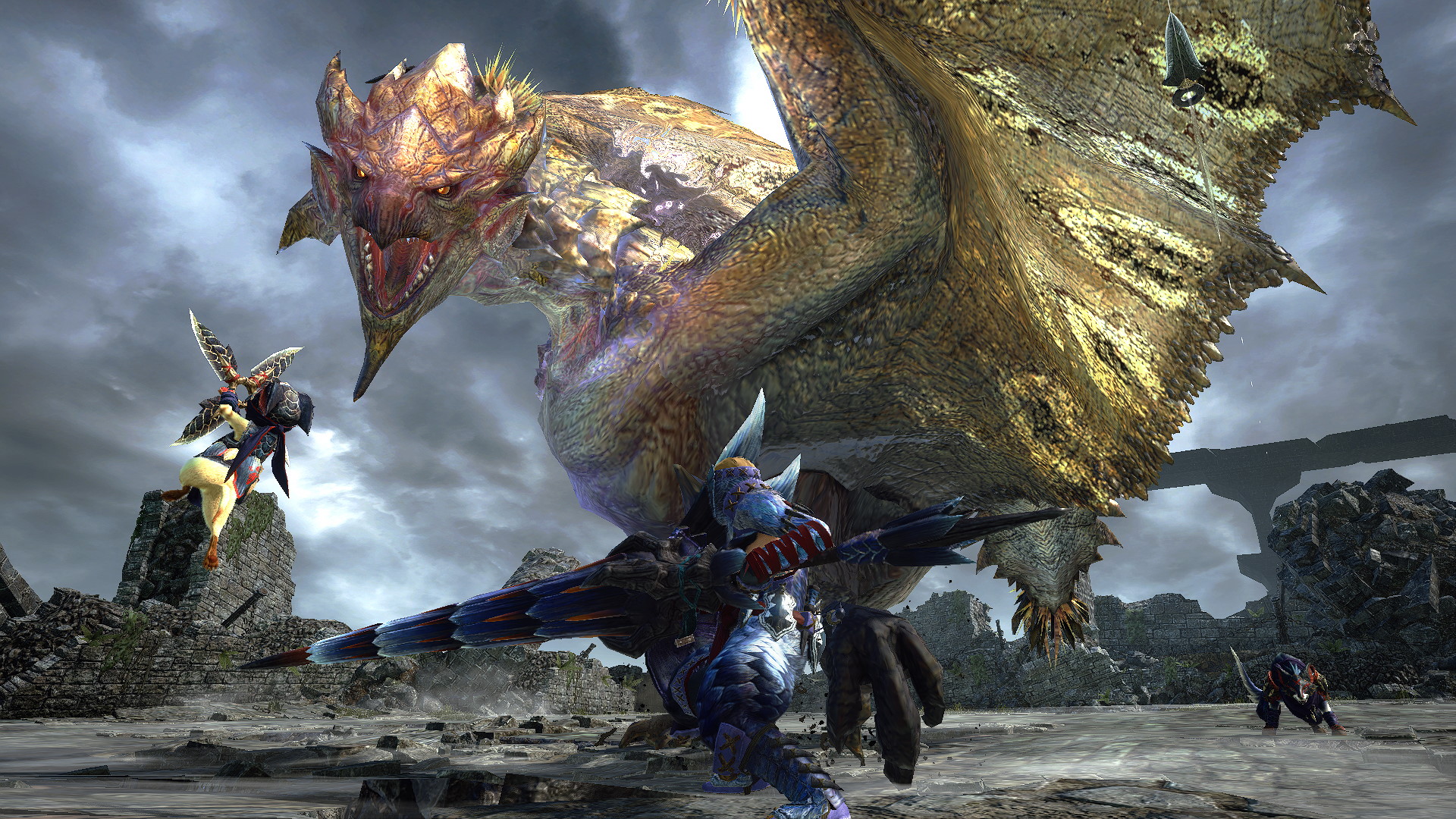 Last seen in 2013’s Monster Hunter™ 3 Ultimate, Lucent Nargacuga refracts moonlight off its bright white fur to become nearly invisible, save for its piercing red eyes. Its relentless attacks and incredible swiftness make it a punishing target for even the most experienced hunters. This agile predator makes its roost in the newly redesigned Forlorn Arena, defined by crumbling stone buildings and colonnades. As if one unseen foe wasn’t enough to handle, hunters must also prepare for Seething Bazelgeuse to crash the party with its incredibly volatile explosive scales. Known as an airborne menace with a penchant for arriving at the most inconvenient of times, Seething Bazelgeuse brings a bombastic flair to any hunt. Finally, Gold Rathian and Silver Rathalos are also swooping into Title Update 1. These rare subspecies are even more ferocious than their iconic counterparts. In addition, the armors that can be created from the monsters’ materials added in ver.11 will include new unique skills. 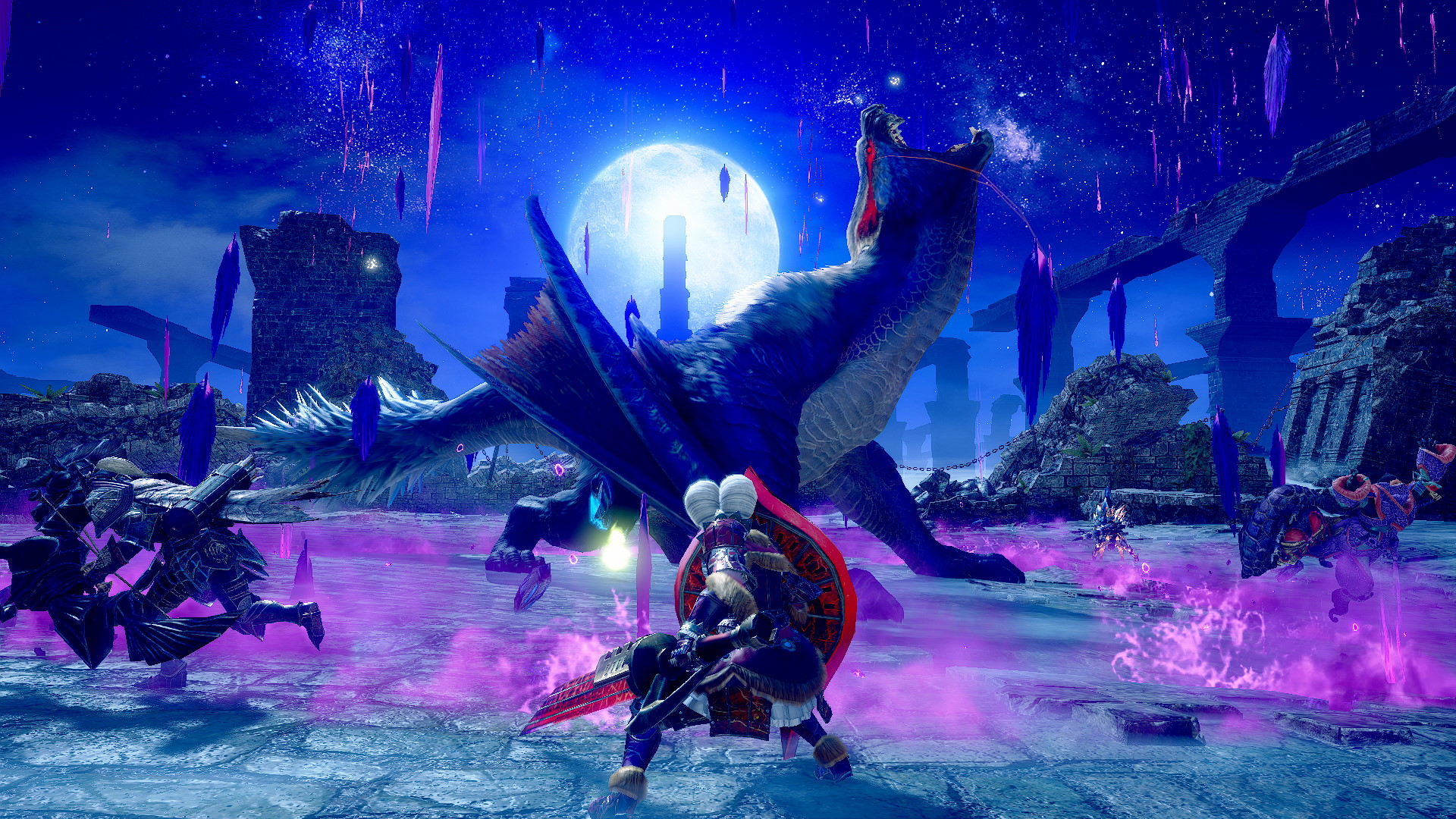 Alongside these harrowing new contenders, the Anomaly Research Quest system is being expanded as part of Title Update 1. The new Five-Star rating for Anomaly Quests has been unlocked, which includes new afflicted monsters such as Lunagaron and Magma Almudron who can be unlocked by progressing through the new Anomaly Investigation Quests. In addition, a new quest system, Anomaly Investigations has also been added. These quests offer randomized quest conditions, such as target monsters, locales, and number of hunters at gradually increasing difficulty ratings. The higher the difficulty rating, the better the rewards! Anomaly Investigations also offer new materials that enable hunters to further customize their equipment in Qurious Crafting. Hunters can customize their preferred enhancements, such as attack power and affinity for weapons, and for armors, defense, resistance, skill points can be randomly changed. Hunters looking for specific materials can stop by Bahari the Scientist’s new Anomaly Research Lab to exchange special items gained from Anomaly Investigations with items useful for Qurious Crafting.

In addition to all of this content, new Event Quests will begin rolling out every week starting August 18th, 2022, alongside extra challenging “Dual Threats” hunts for those looking to test their mettle. Fashion hunters and Fiorayne fanatics also have plenty to celebrate, with new DLC options for layered armor, hairstyles, stickers, BGM, and even NPC costumes that allow hunters to mirror their favorite characters in Monster Hunter Rise: Sunbreak. The layered armor set allows players to take on the appearance of Fiorayne, and the voice DLC will give the players her voice during their hunts.

Trying out the new skills or on a fashion hunting quest to look your best? Let us know which of the new armor sets is your favorite!#Sunbreak pic.twitter.com/ZY1IK3yYrI

Please stay tuned for future title updates as new monsters, and more await just around the corner with the Free Title Update 2 launching in late September.