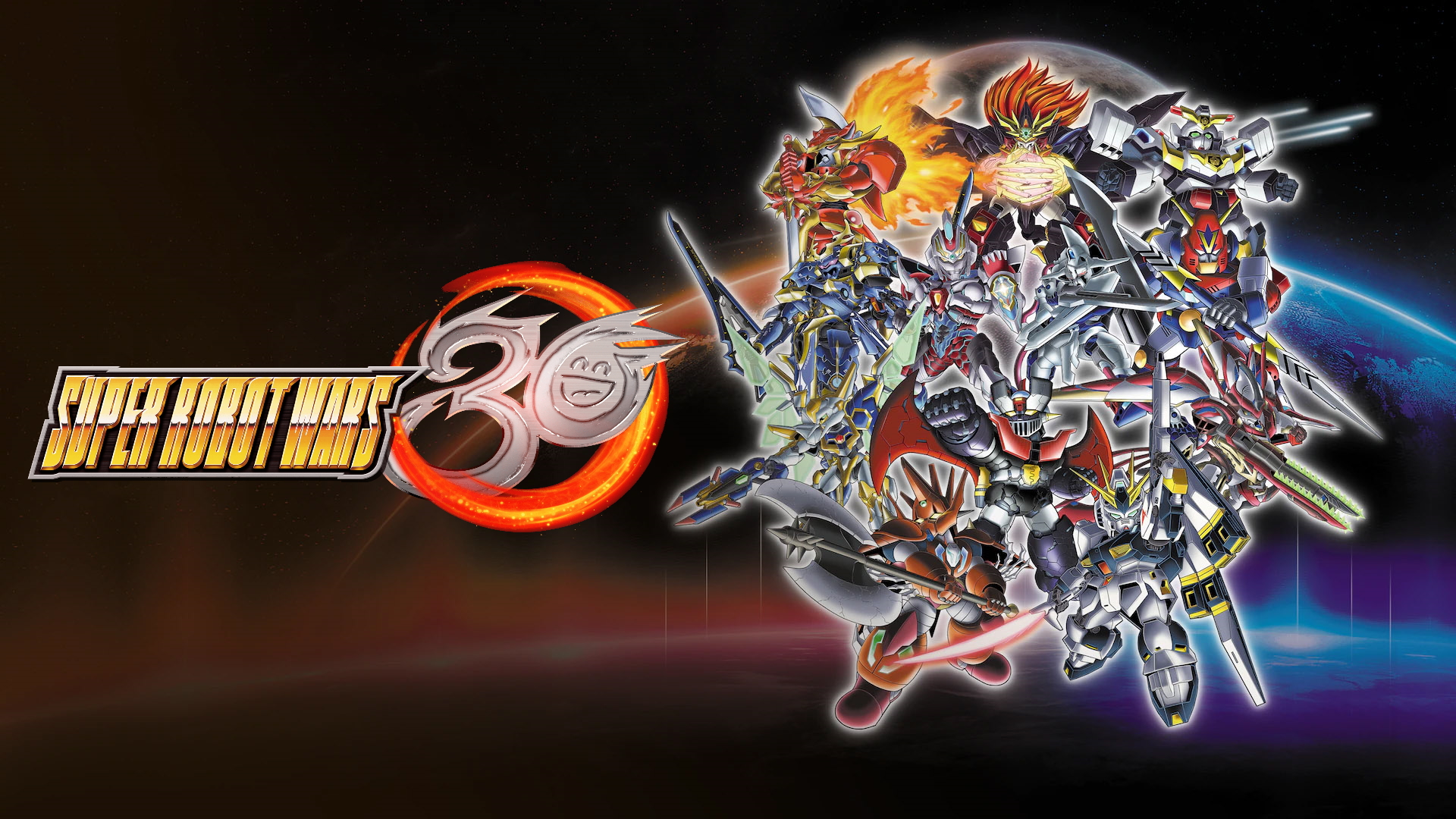 My experience with the SRW series started with SRW Alpha back in 2000 on the PlayStation 1. I would visit my neighbour back then and we’d play it together on his console and it was amazing. We would go as far as yelling out the ultimate skills’ name our Mech warriors dished out; ‘EIN FUNNELLLLL’, ‘ROCKECTOO PUNCHH!’. Ah, those were the days indeed. 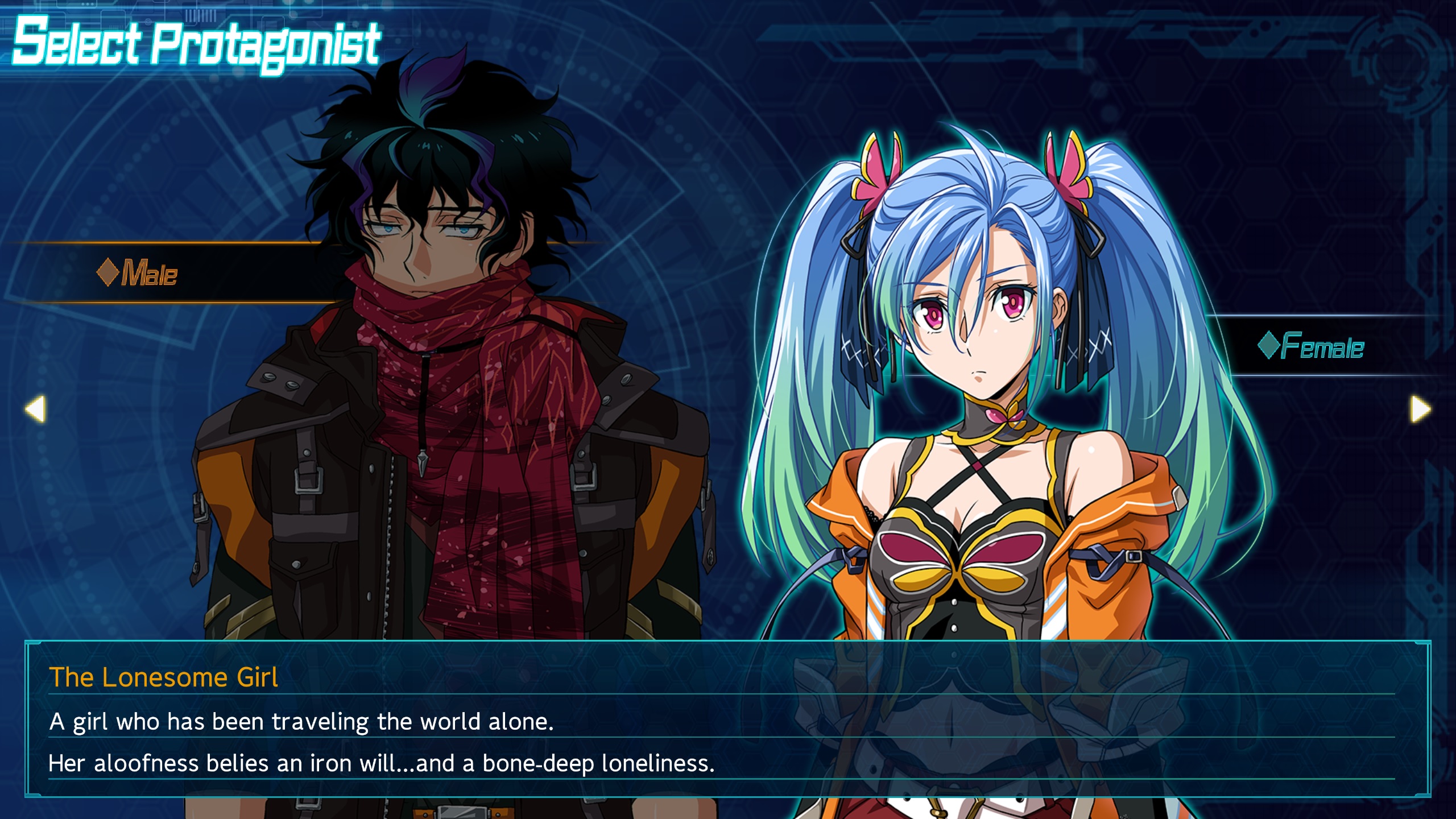 To date, I’ve played 8 Super Robot Wars games, 9 including this new one (yes, I am a fan) and though they are all identical to one another in some ways, the new Super Robot Wars 30 still managed to impress me. In fact, I found it difficult to manage my excitement when all the famous mechs in the anime are all packaged together into one single game. So, when my editor came to me to share the news that Bandai Namco Entertainment has given us a review code for the game and that he wanted me on it, I had no reason to refuse.

Super Robot Wars 30, (let’s call it SRW30) is a grid-turn-based strategy game that consists of all the famous Japanese Mech Animes and blended them into one game. The resulting combination is presented so well that I could hardly tell they actually came from different anime-verse. All of the SRW game stories start the same; during an attack by the enemy, your male or female protagonist discovered an experimental mech called ‘Huckebein 30’ that you’d end up piloting. Together with other novice pilots, your group will crew the mothership ‘Dreissstrage’ in your bid to fend off the enemy and after that, go on a journey to save the world.

It’s a classic mech-anime plot that’s been overused throughout the series’ history but for some reason, this type of storyline continues to be employed. I can only assume that the designers couldn’t deviate from the original stories the game is inspired from, but I can’t help but to wonder what if they just came out with a new script? Because ultimately, this is a video game and like all games, it could benefit from having some elements of surprise lying in wait.

But despite the lack of surprises from its predictable plot, the developers did ensure the series continue to find other ways to improve. SRW 30’s graphics and animation department is one prime example of this. Although it still couldn’t live up to the standards of triple-A games, the visual effects and fancy animation that graces the screen whenever a mech serves its attacks are still pretty awesome to witness. Actions and the graphics depicting them are fluid and feel as if I was watching an anime.

I also appreciate how the vocalised background music accompanies an action whenever there is one. It makes an encounter feel epic and my personal favourite was the Gundam Narrative ‘Vigilante’. Destroying an enemy had never been so satisfying.

The game came with some newly added and improved features like the ‘Mission Select’, that allow players to either continue with the story or do sub-missions. Compared to the previous Linear progression system, this gives me more freedom to choose if I want to progress with the main story, or just repeatedly farm to achieve the build I want in the sub-missions. This is important for me because of my playstyle. I enjoy building my mechs up to the point where they can just sweep the battlefield with my enemies and farming sub-missions is one way for me to get there.

I spend most of the time in the upgrade section as I maxed out my pilots’ stats/skills and mechs armor/weapons upgrades to increase the damage potential. As I said, I enjoy sweeping the floor with my enemies but you might wonder why I only tinker with my pilots’ stats instead of just focusing on my mechs’ weapons. Because the game gets progressively harder and strategically more demanding especially on a higher difficulty. Having good stats for my pilots assures me of greater accuracy and damages against enemies with high evasive rates or those with high HP.

SRW 30 comes with a new feature called the AOS update, it allows me to customise and upgrade my mothership, Dreissstrager. It’s a simple upgrade system yet effective in adding more to the gameplay experience. I could positively influence certain aspects of my fighting groups like pilots and mechs as well as increase their morale during the sortie. Close Quarter Combat range and damages along with passive incentives like getting more credits or PP upon kills are among the results I can achieve by tinkering with my mothership upgrades. 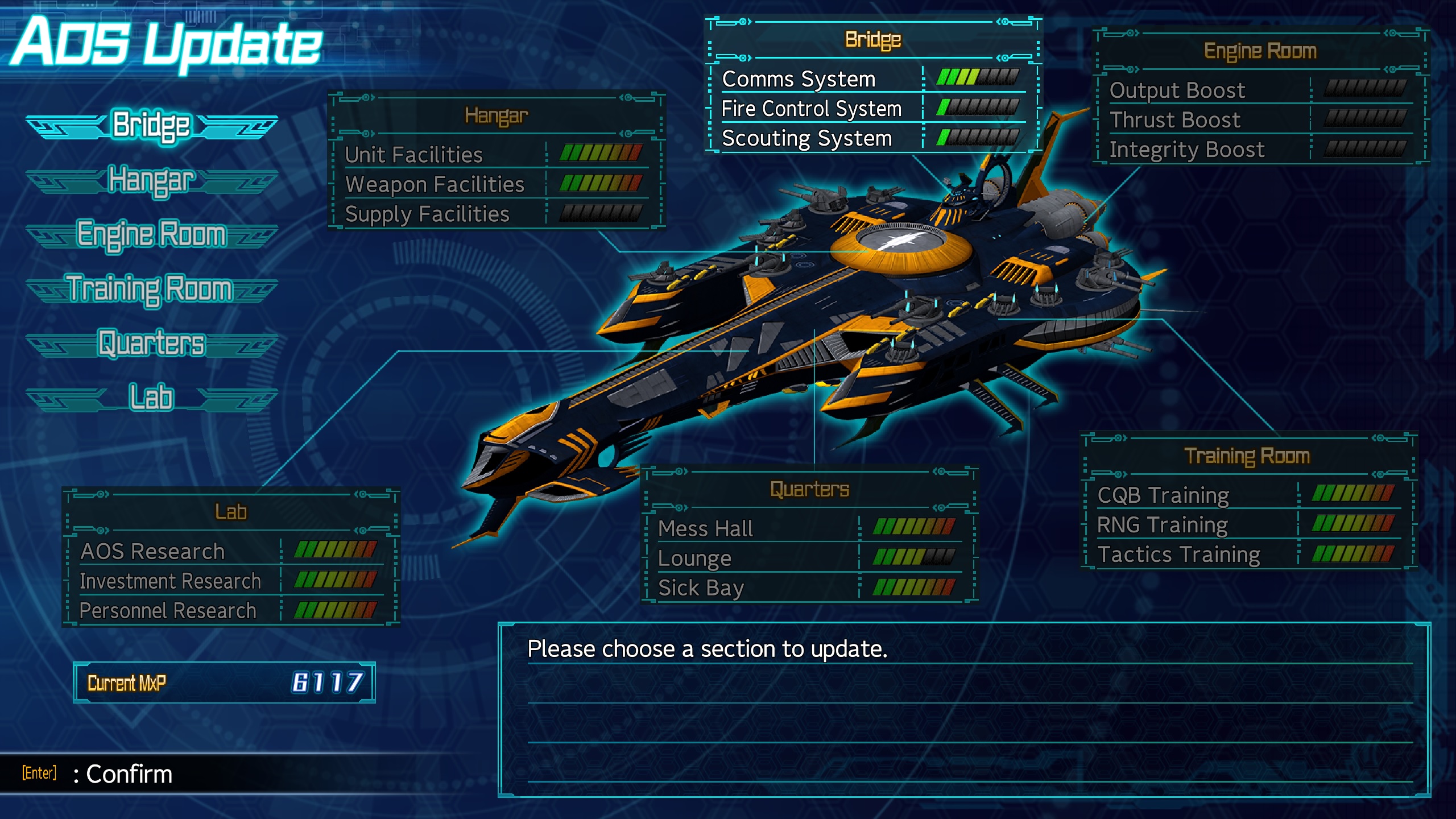 There is also the Supporters feature, another new addition that allows me to activate certain abilities that grants both active and passive effects, and it is an interesting feature but it doesn’t enjoy the same prominence as the other features in-game, making it rather forgettable after a while. I’ve probably used it just a few times to fulfill the objectives and have just gone without it in my playthrough. It is an interesting feature to have but I can only wish the developer have provided more scenarios where they can be more useful.

The preparation stage in anticipation of stronger enemies is a grinding process but one that I somehow enjoy. But for those who didn’t want to go through the repetitive cycle of grinding, SRW 30 comes with the new and convenient ‘Auto-Battle System’. The system behaves exactly like its name suggested, by running battles automatically according to my preset commands. It goes without saying that the A.I cannot replace human intelligence, more so when it is one such as mine, but it does afford a certain degree of comfort and flexibility in what is otherwise a repetitive and tiring process (Farming).

The SRW series in my opinion had always been a niche game serving a small crowd. It is obvious in SRW 30 that the developers are looking to pull in new people by making the game more accessible to them. The game feels relatively easy on normal mode, so much so that running the auto-battle can carry a player towards the end. But for a strategic-grid-based RPG game like this, the strategic aspect of the gameplay is where it shines the most and those seeking a real thrill can play it on a harder difficulty mode. The absence of the “SR Points” is also something that I miss as I always enjoyed how a stage can become more challenging upon completing these “SR Points” which also unlock bonus stages and true ending.

My playtime is equally balanced between doing missions and upgrades. SRW 30 is a strategic RPG game through and through and it requires patience and a tactical approach to succeed especially in higher-difficulty settings. And since the game has multiple endings depending on which route the player chose, there’s a high replay value.

What I really liked about this game

What I wish was better 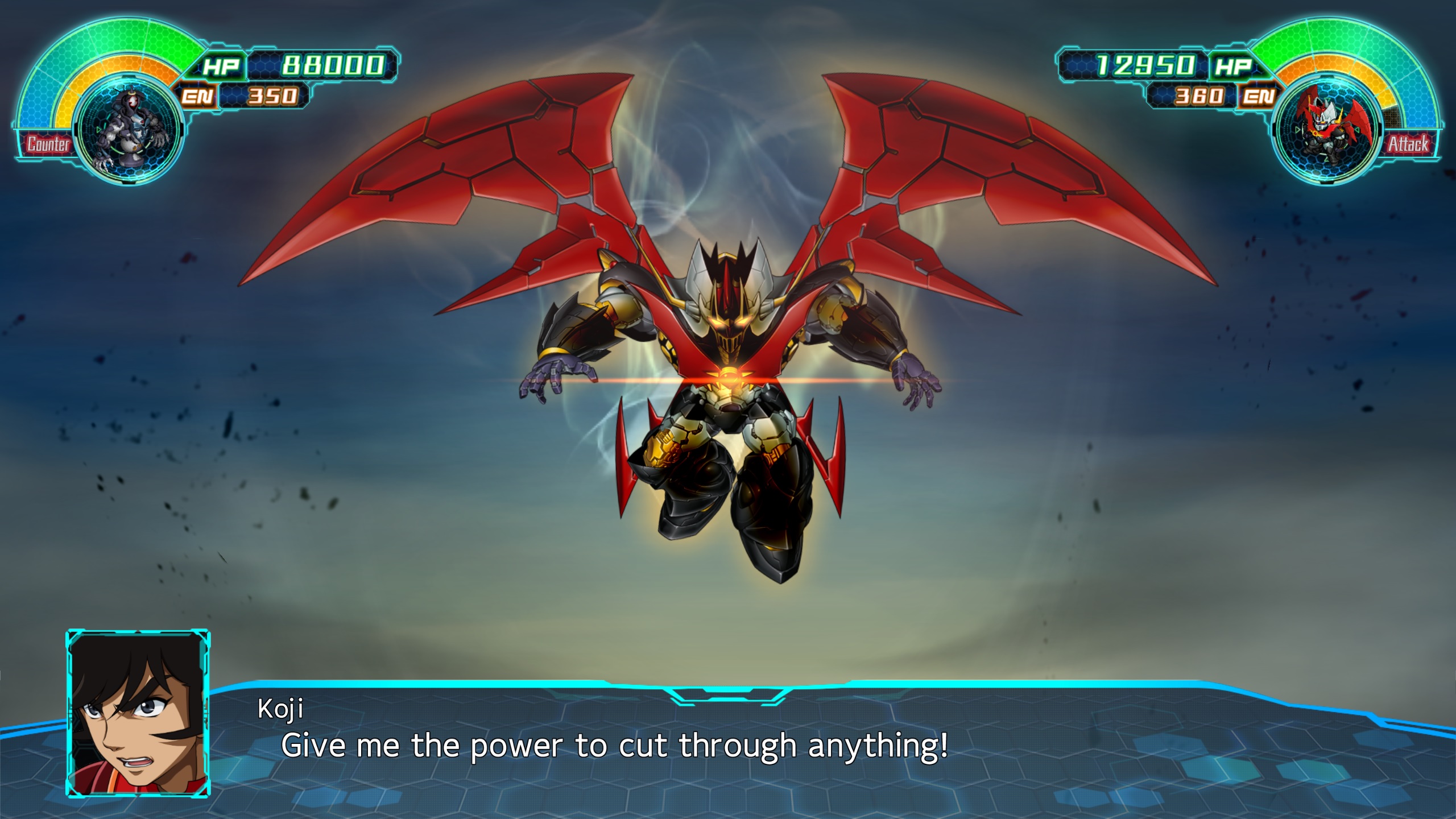 SRW 30 is an eye-pleaser for the old fans coming home for a bombastic experience. Its concept has remained largely the same, but the series celebrated its 30th anniversary in style – by bringing about all imaginable mechs across multiple universes that have a respectable reputation. If you like mechs and strategy games, SRW 30 might be a good fit for your taste.