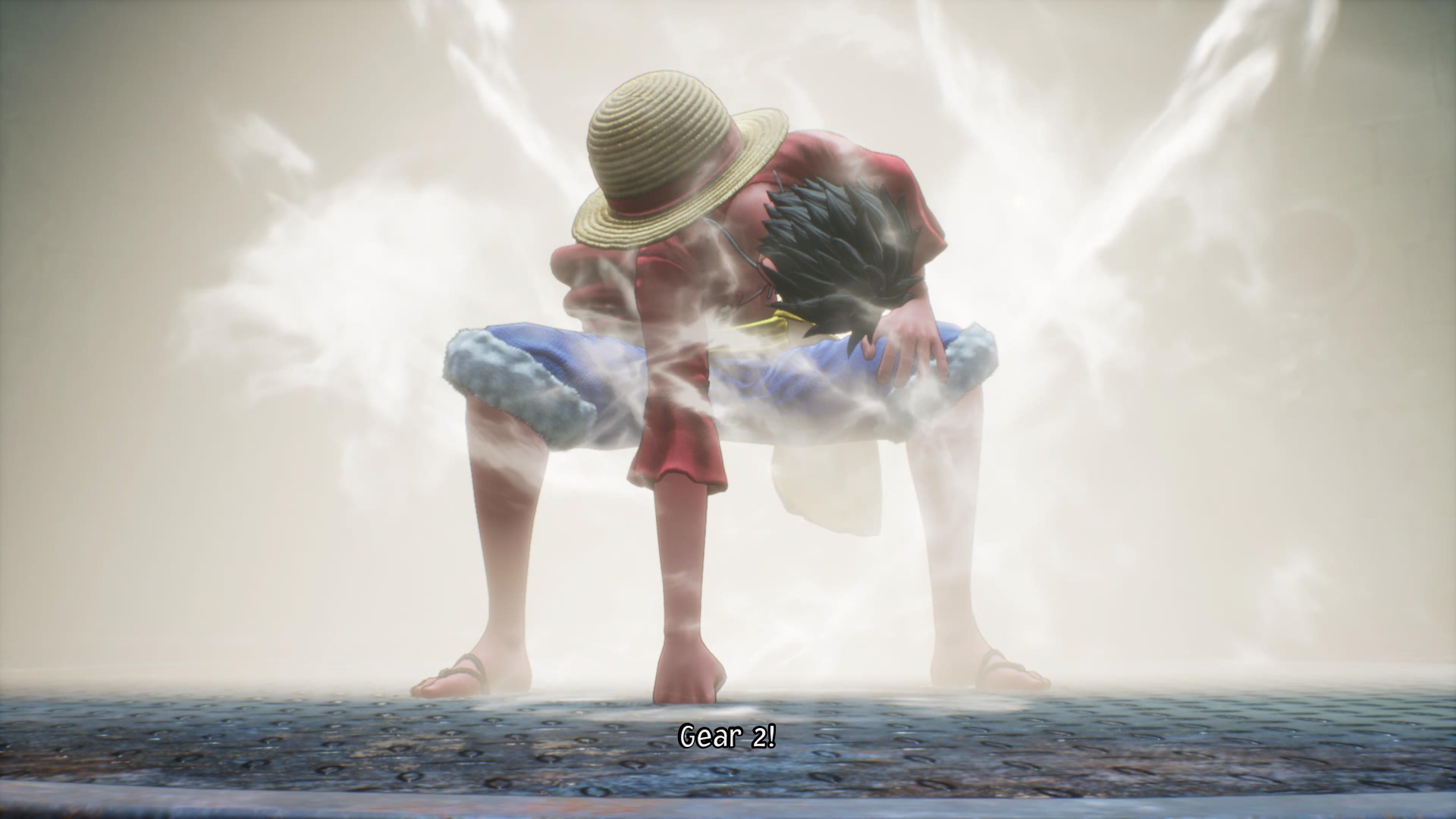 The One Piece franchise reaches its impressive 25th anniversary this year and to commemorate it comes to a new title with its own original story and new characters designed by Eiichiro Oda, the author, and creator of One Piece himself. In my previous write-up, I talked about my impression of Odyssey’s demo and called it a ‘delightful few hours’. Now that I’ve played the full game to its end, the said delightfulness of the game is still mostly true though it borders (nearly) towards the opposite direction. But before I get there, here’s a short introduction to what this Action-RPG title is about. 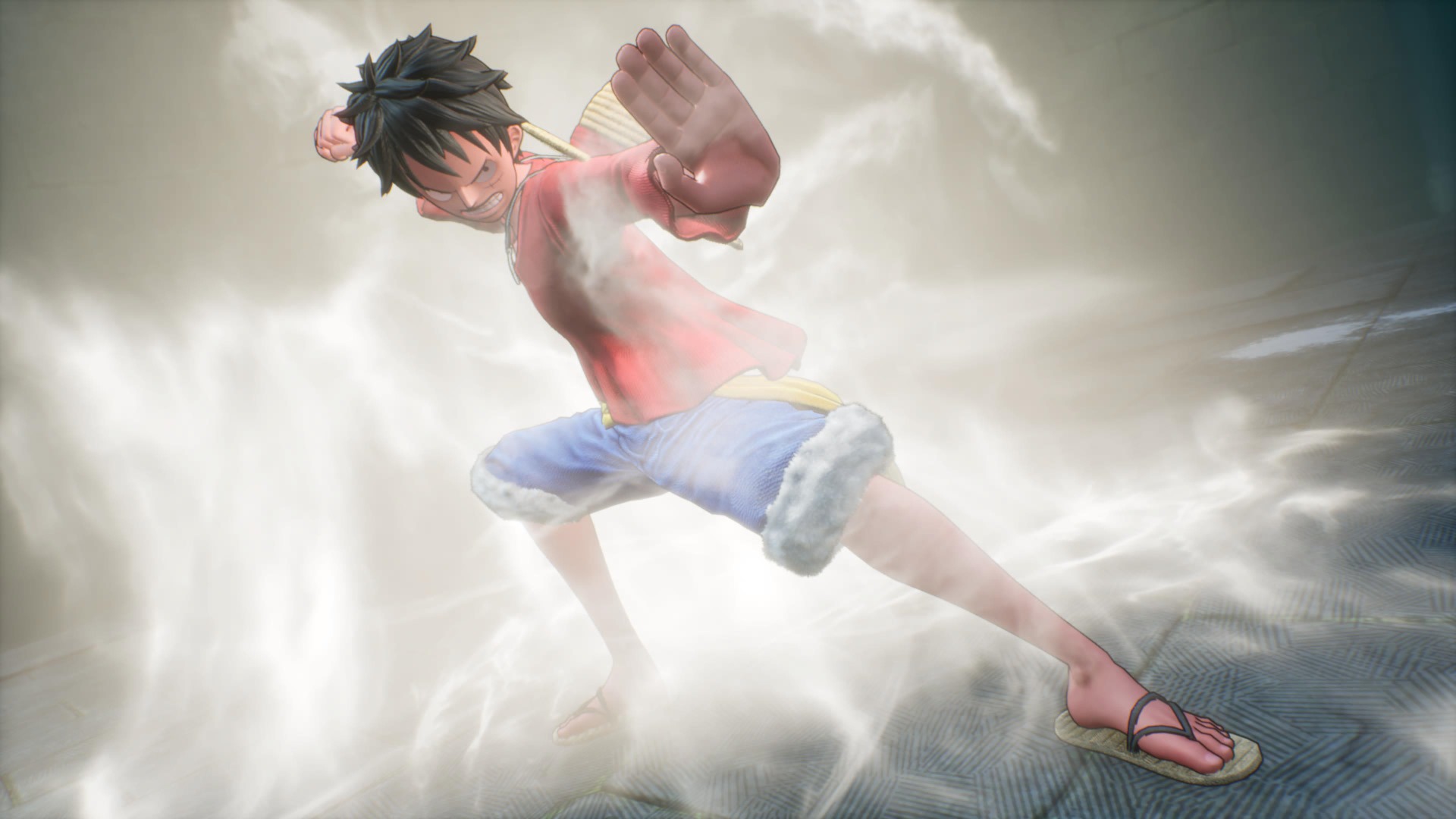 Our favourite Straw Hat pirate crew featuring core members Luffy, Nami, Brook, Chopper, Usopp, Sanji, Robin, Zoro, and Franky has crashed and landed on the mysterious island of Waford. Thousand Sunny, the crew’s ship is wrecked, and their unceremonious arrival is then made worse when Brook lost his body again and one of the crew members got kidnapped by a giant gorilla. Jinbei, the latest member of the crew in the canon story is not in the game (he could (perhaps) be a playable character later as a DLC).

When the crew got back together again, they are met with one of the two inhabitants of the Island, Lim, a mysterious girl who distrusts pirates due to her own prior experience with those who landed on Waford before the Straw Hats. Due to this, she sealed the crew’s power into cubes and scattered them across the Island and Memoria, a world of selected memories where the crew’s power evolved in the canon story. To gain their power back, the crew must explore both the Island of Waford and revisit their past through Memoria to get their full strength back. 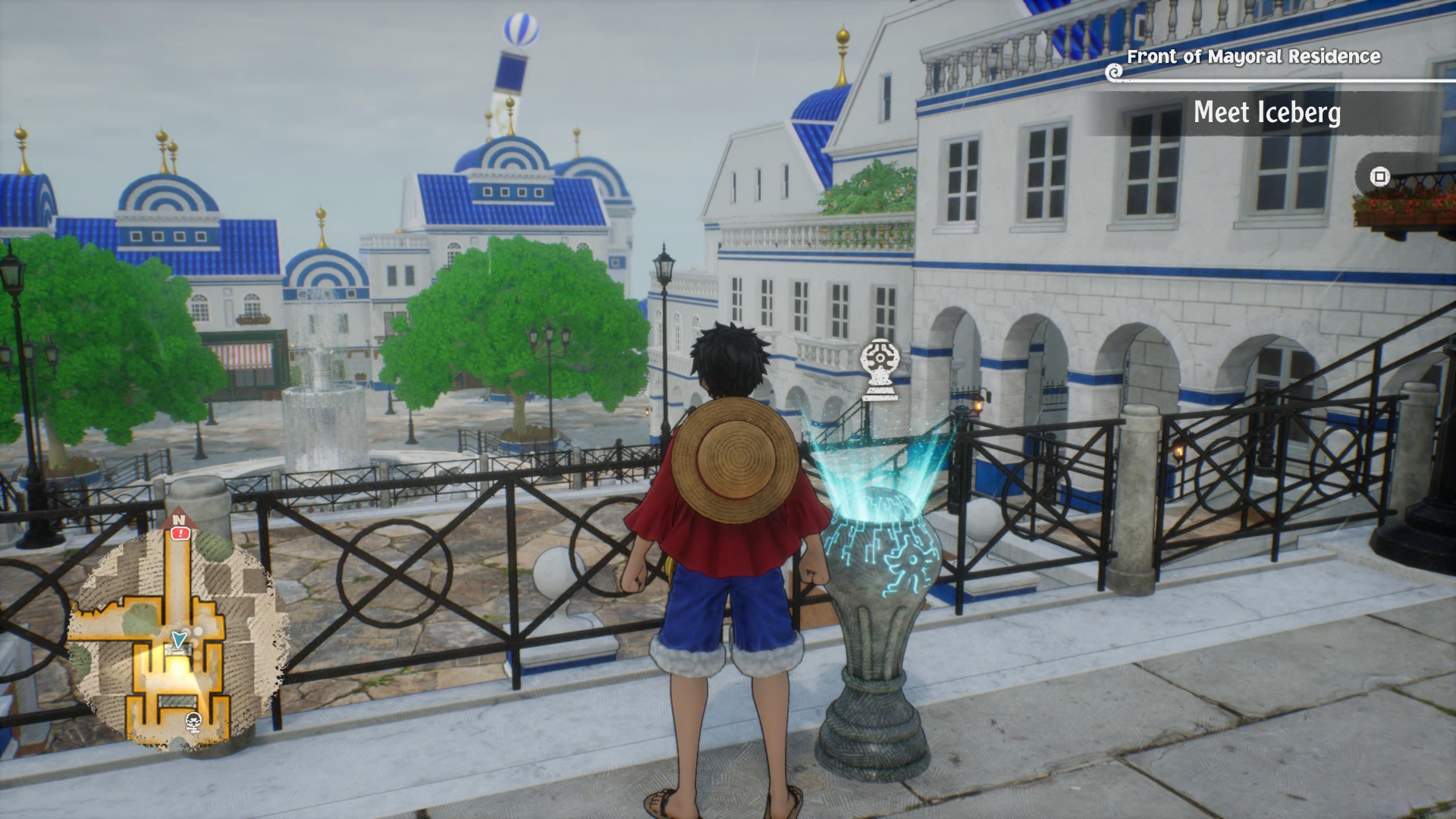 Adio, the other inhabitant of the island and Lim’s caretaker managed to convince her after meeting the crew and promised to help them get their powers back. Together with Lim, the two islanders would take turns to travel with the crew – one going with them on the island and the other to memoria. In memoria, the crew will revisit four exciting canon arcs – Alabasta, Water Seven, Marineford, and the Dressrossa arc. I actually expected the trip back to the four arcs to be boring considering I already know how things will play out and what happens at the end, but the game did its best to circumvent this by introducing bits of twists and changes to the plot for a breath of freshness, though the outcome and core plot remain faithful to the canon storyline. In their bid to introduce and offer more content and gameplay opportunity, side-quests are also added onto the four memoria chapters, allowing players to explore the beautifully done maps even more but this is not without a downside. 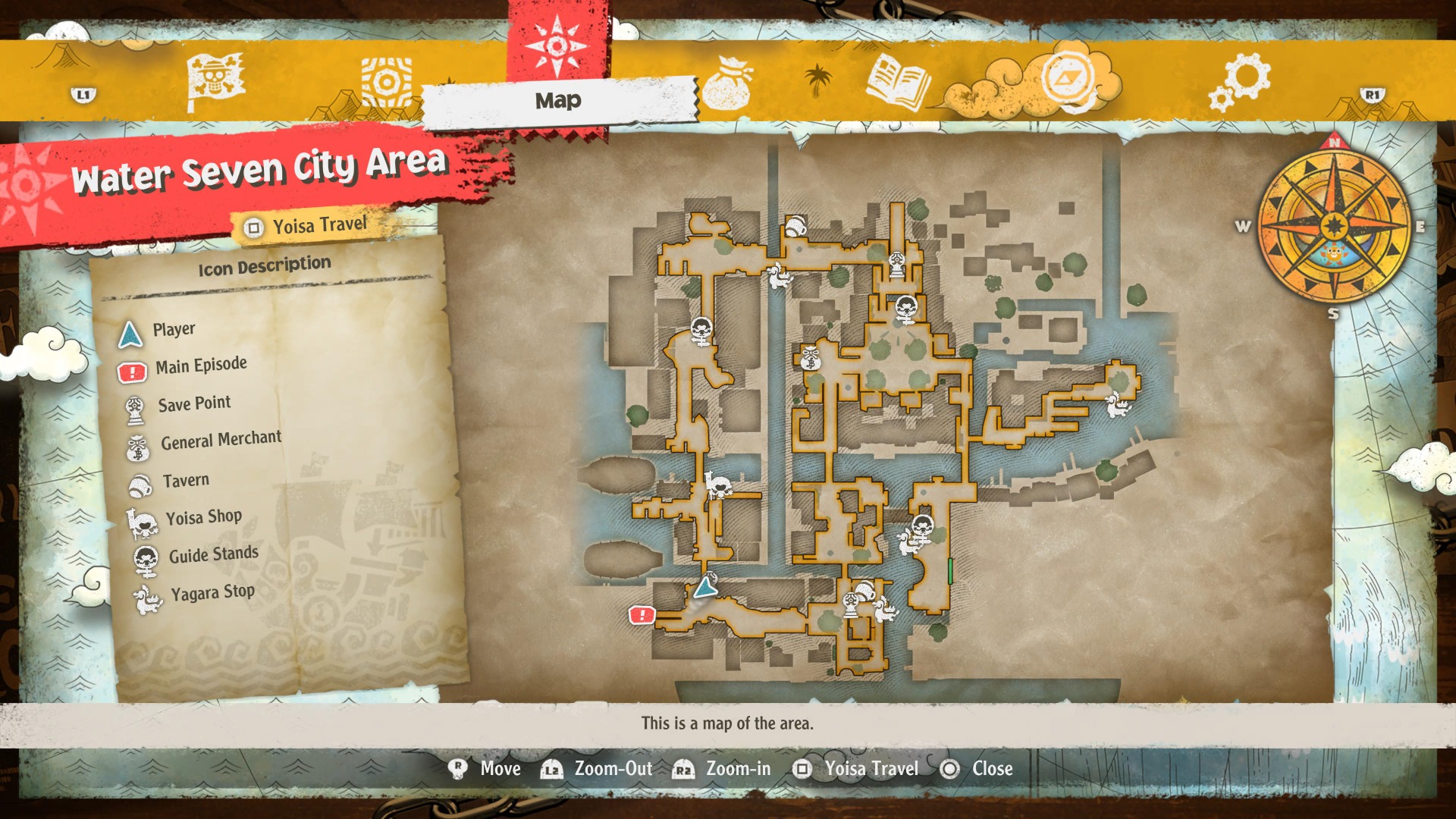 Though side-contents are ample in Odyssey, they rarely feel necessary unless you are a 100% completionist. Most of the added contents are outright fillers intended and designed to prolong the gameplay rather than giving meaningful value to the time invested in doing them. As the result, most of the side encounters would result in mindless back-and-forth traveling that didn’t take long to irritate me. This is also true for part of the main quest where the game employed the same time-wasting tactic that sends the player on a tiring back-and-forth run, which is a shame. Because Odyssey’s original storyline surrounding the island of Waford and the two new characters, Adio and Lim, is actually good stuff but the endless padding and execution left me wishing it was more direct and done better. 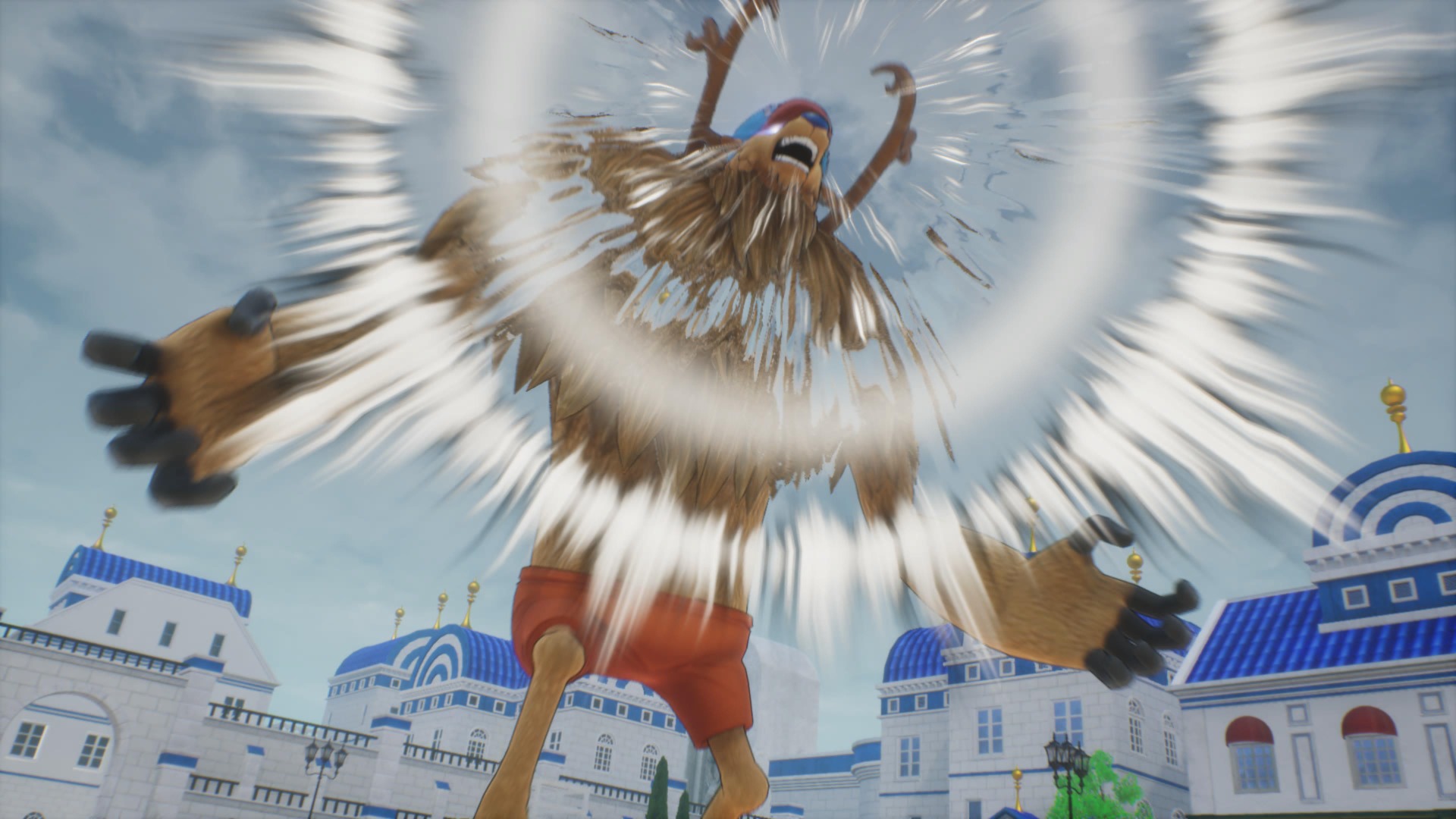 Thankfully, Odyssey is a beautiful-looking game for the most part. The island of Waford itself is vibrant and lively with its own flora and fauna. I was especially impressed by the level of detail the game managed to express and in such beautiful quality no less. The four arcs that players will visit were also re-created beautifully, each containing several maps or areas waiting for players to explore. The game has two graphic modes – Performance and Graphics. The first one prioritises frame rates and gives you a smoother experience, the other improves graphics quality. I picked Performance over the latter as Graphics Mode didn’t really improve the visuals significantly and better frame rates just felt so much better for me. 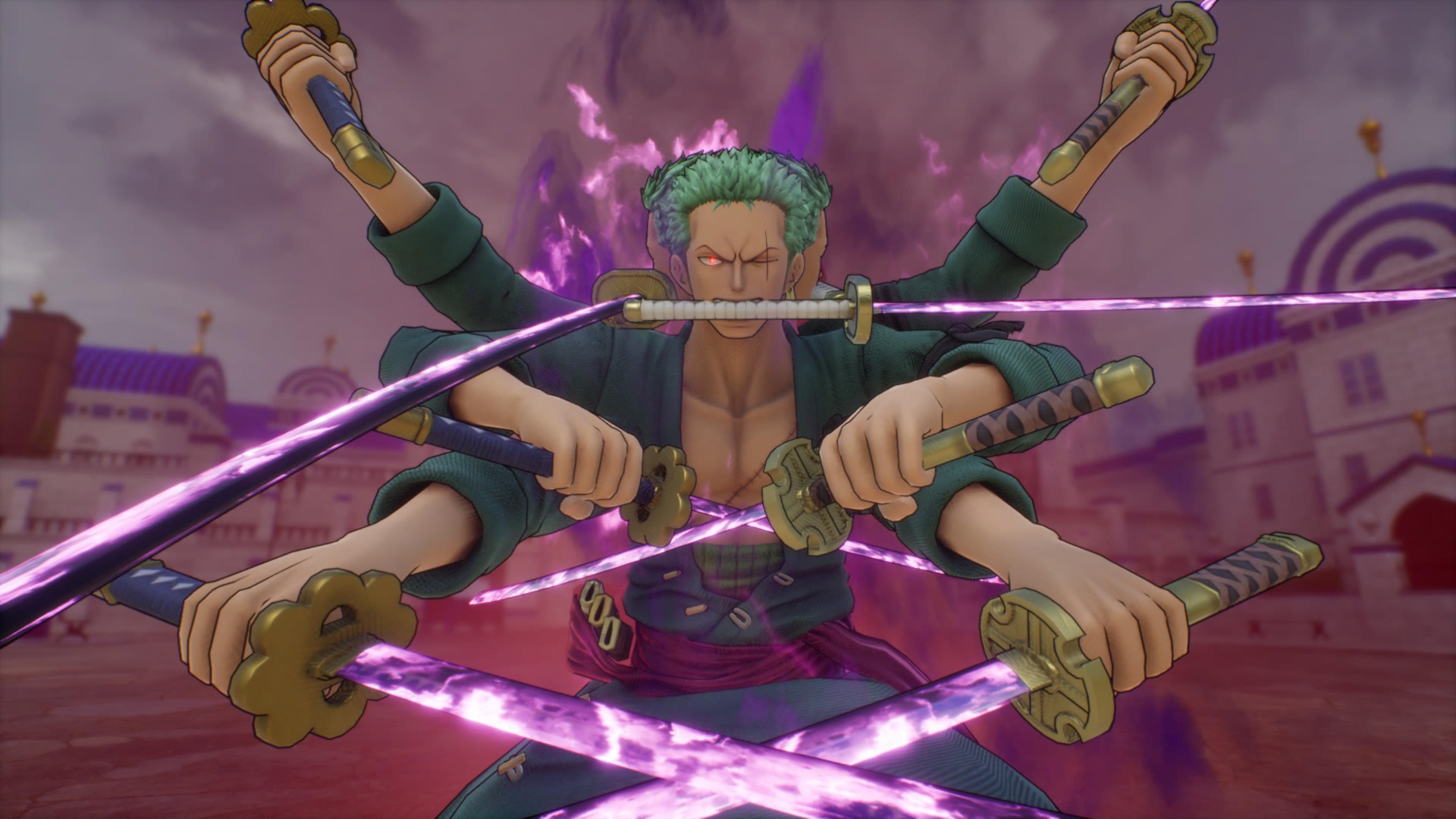 Other than the amazing game world, fans of the franchise are also treated to a proper One Piece spectacle. The crew member’s signature moves are presented with rich effects that feel rewarding whenever they are played and the battle system, though still the basic turn-based Rock-Paper-Scissors module, managed to be fun thanks to how simple it works and is great to look at. Four of the crew members will fight while the rest will take a seat in the reserve. But how the game handles active-reserve character swapping is another thing I like about Odyssey. Characters can be switched in-out anytime the player wants without a turn penalty so the might of the whole crew is readily and seamlessly available at the player’s disposal. 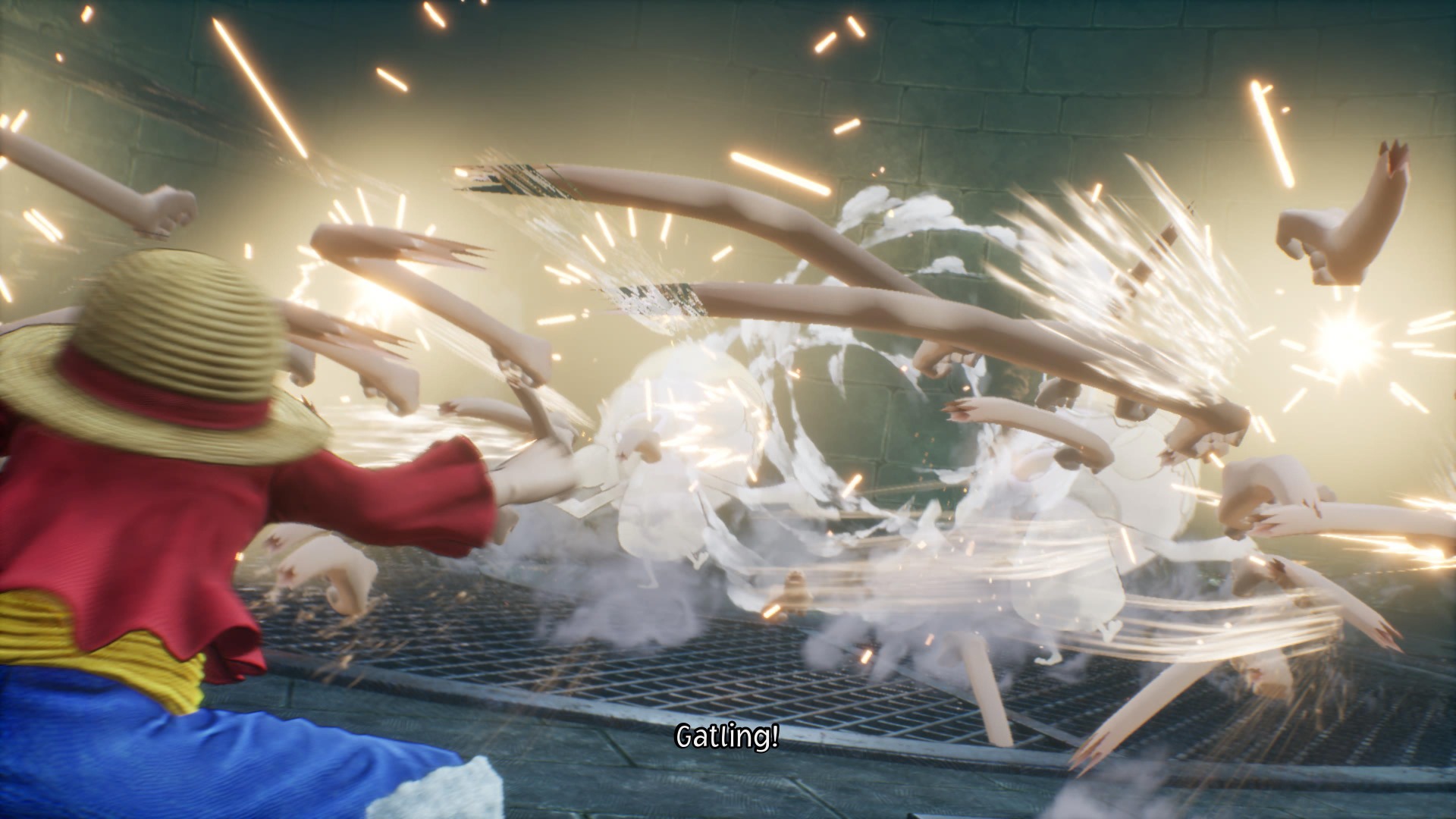 In an encounter, the crew will be broken up to fight on several fronts at the same time. This creates the impression that a large-scale battle is taking place as opposed to the traditionally monotonous 2-sided battles. Some characters would have a move that reaches further away, allowing them to assist their comrade from a distance. Characters like Nami and Chopper, for example, both have AoE skills that affect the entire battleground, as opposed to Luffy and Zorro who only possess AoE skills with a smaller radius that only affects the immediate group of enemies directly in front of them. 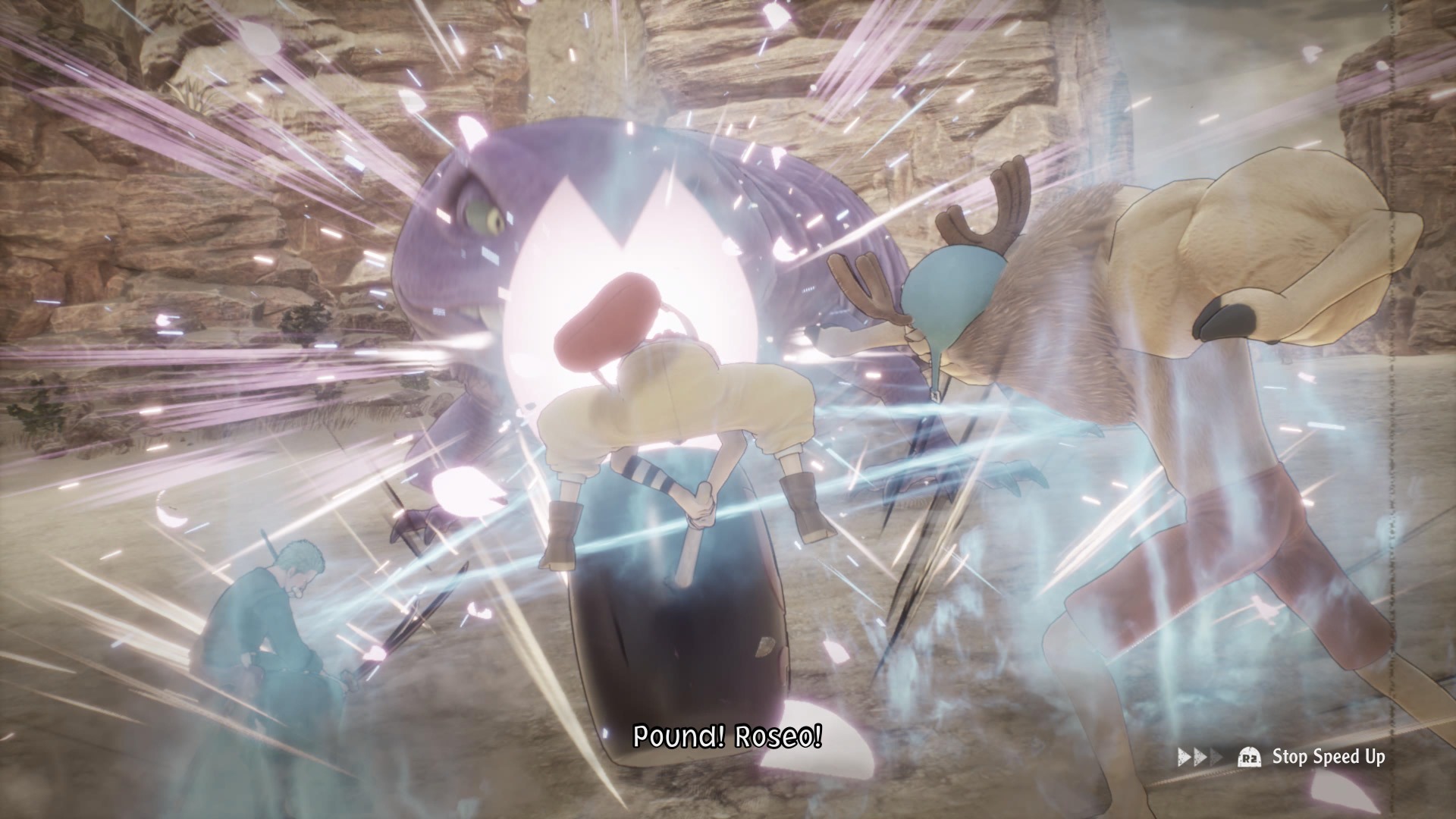 The game also up the ante once in a while by introducing bonus exp events in the middle of the round where completing the objective would reward a huge exp boost. This can be an enemy suddenly powering up for a huge attack and the team must take him/her down in one turn or before a crewmate is knocked down, prevent an enemy from escaping the next turn, or defeat a certain enemy with a specific crew member. 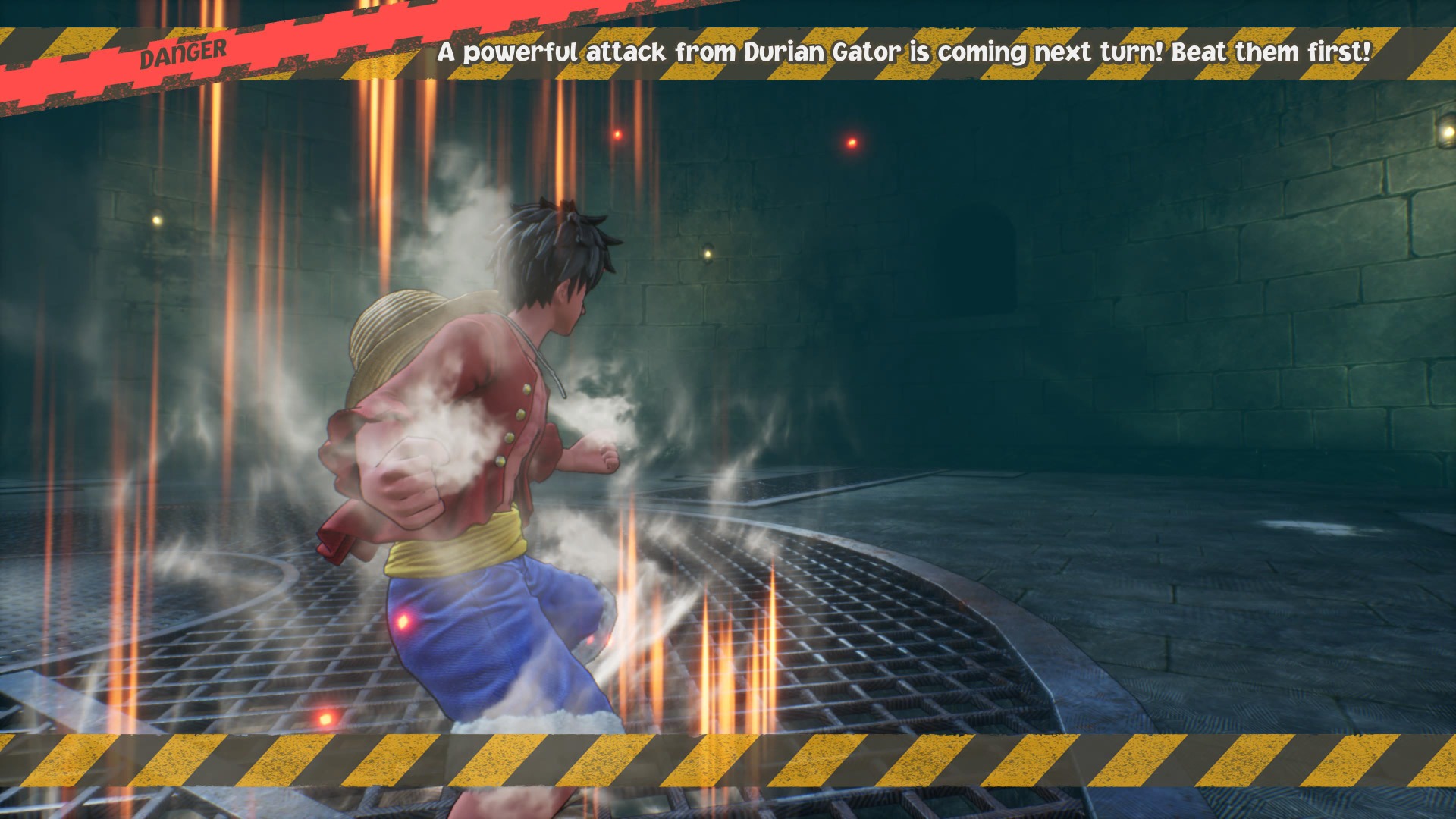 While the battle mechanisms are simple and fun to watch and play, those who come seeking a challenge should hold their thought until they finished reading the following sentences. Fights in One Piece Odyssey are ridiculously easy. So easy, in fact, I’d usually surrender the controls over to the A.I to finish the battle for me via auto-battle. Rarely did I need to intervene unless it was a boss fight or some sudden event came up. This is a good game for casual players who wants to play a beautiful One Piece game but not worry about strategising and formulating moves like how most turn-based RPGs are. But if you need to fuel yourself with the satisfaction of winning a close and glorious battle then know that you won’t find it here.

But don’t get me wrong. Battles are still fun to play because of the eye-pleasing skill animation and the constant need to swap team members to form an optimum composition against different types of enemies and to see the formula work. I just wish it would offer an option for tougher battles so that there’d be tales worth remembering and talking about because both the game and players can only benefit from it. 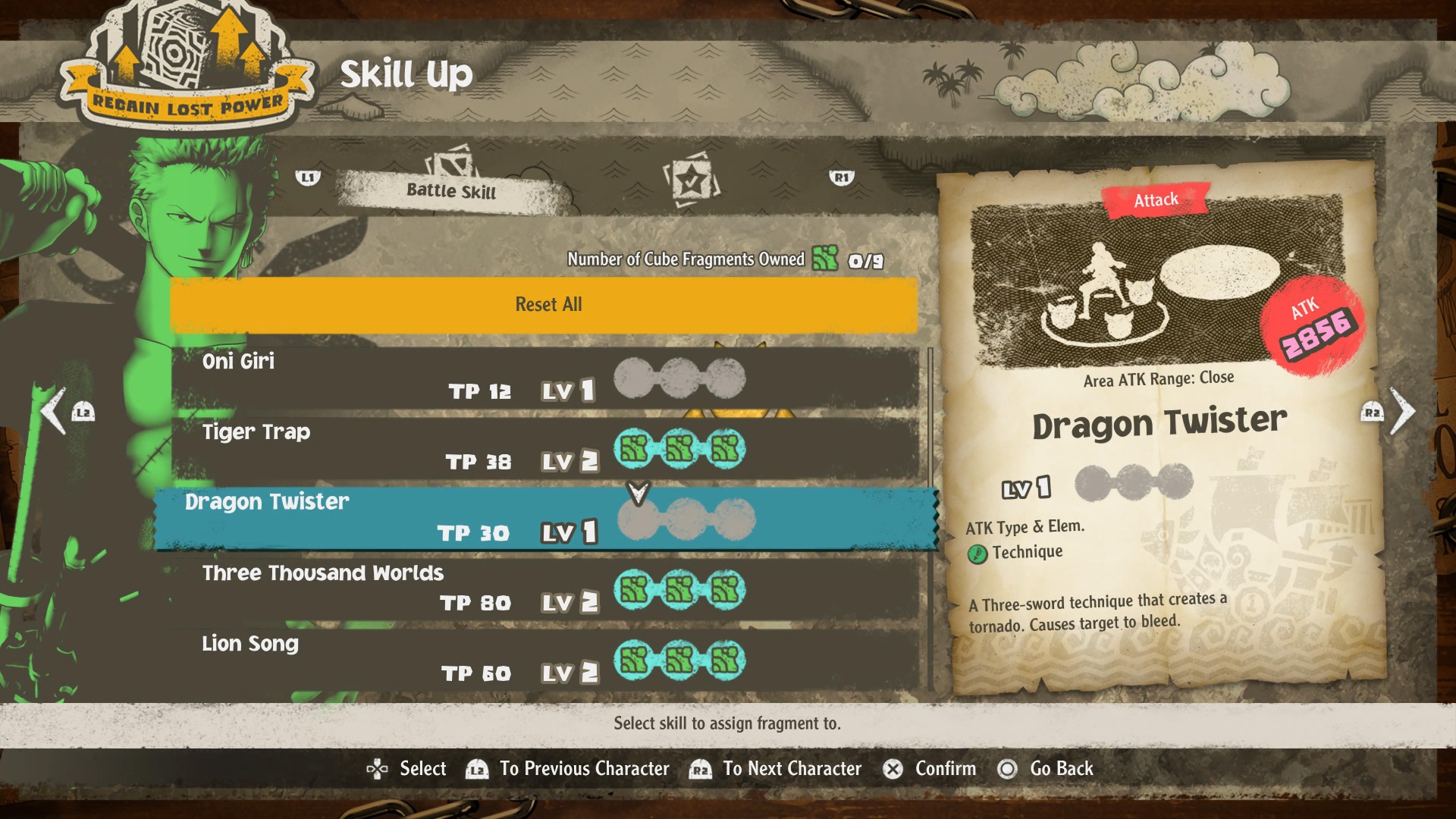 Funnily, for a game with such a relaxed combat mechanism, the game has a surprisingly strict ‘Save Game’ protocol. Game saving can only be done by interacting with a save point sparsely located throughout the game’s map. I got caught off guard once, thinking the game must at least have auto-saves at some point only to be slapped in the face when I encountered a scripted battle that pitted my Usopp against a Kungfu Dugong. Usopp, the least armed character on my team got his ass handed to him after a Corkscrew punch from the dugong and it was game over. The game bounced me out to the menu and would only allow me to continue from my last manual checkpoint. I lost an hour’s worth of progress there.

What I liked about One Piece Odyssey 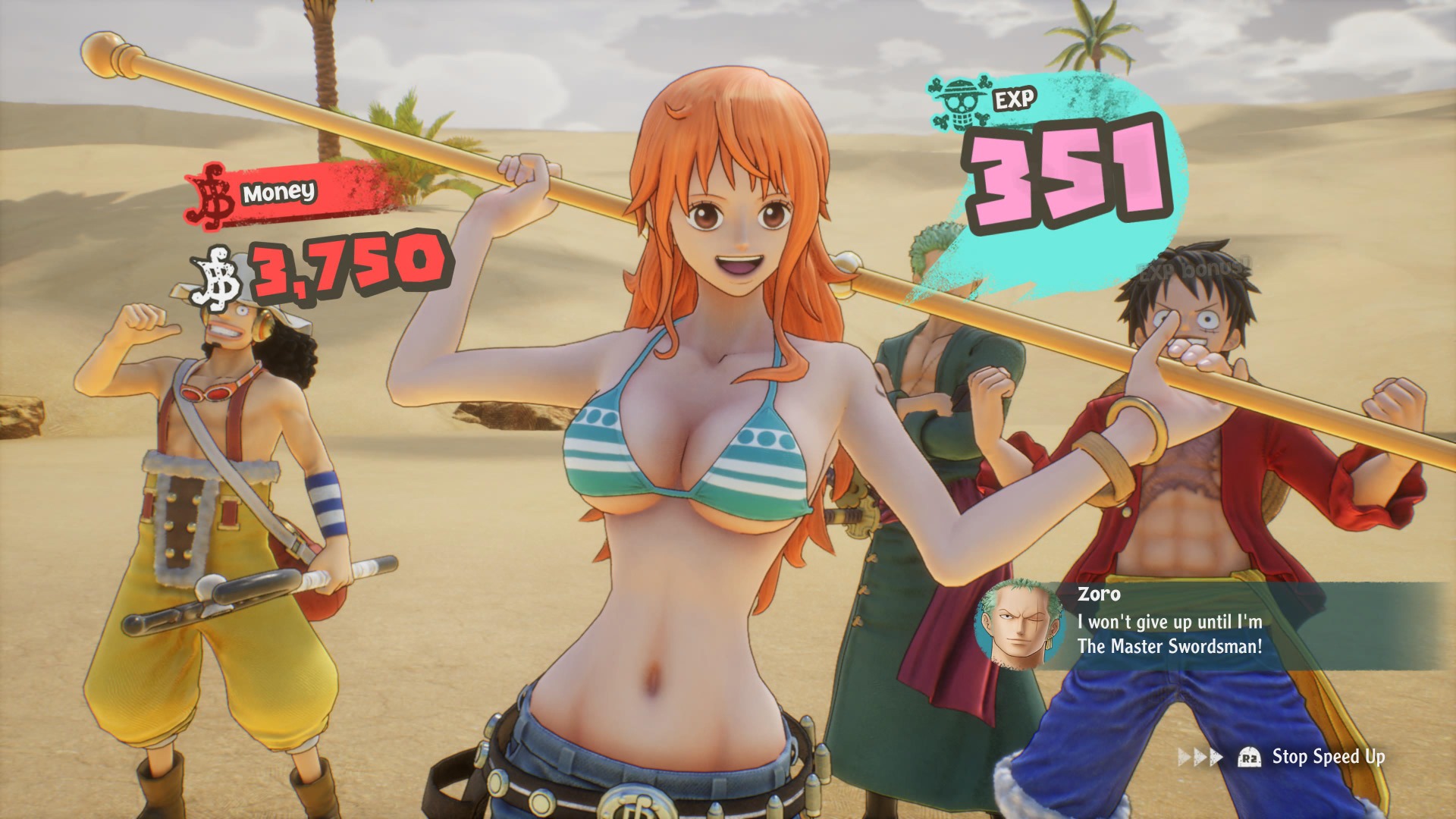 What I wish was better 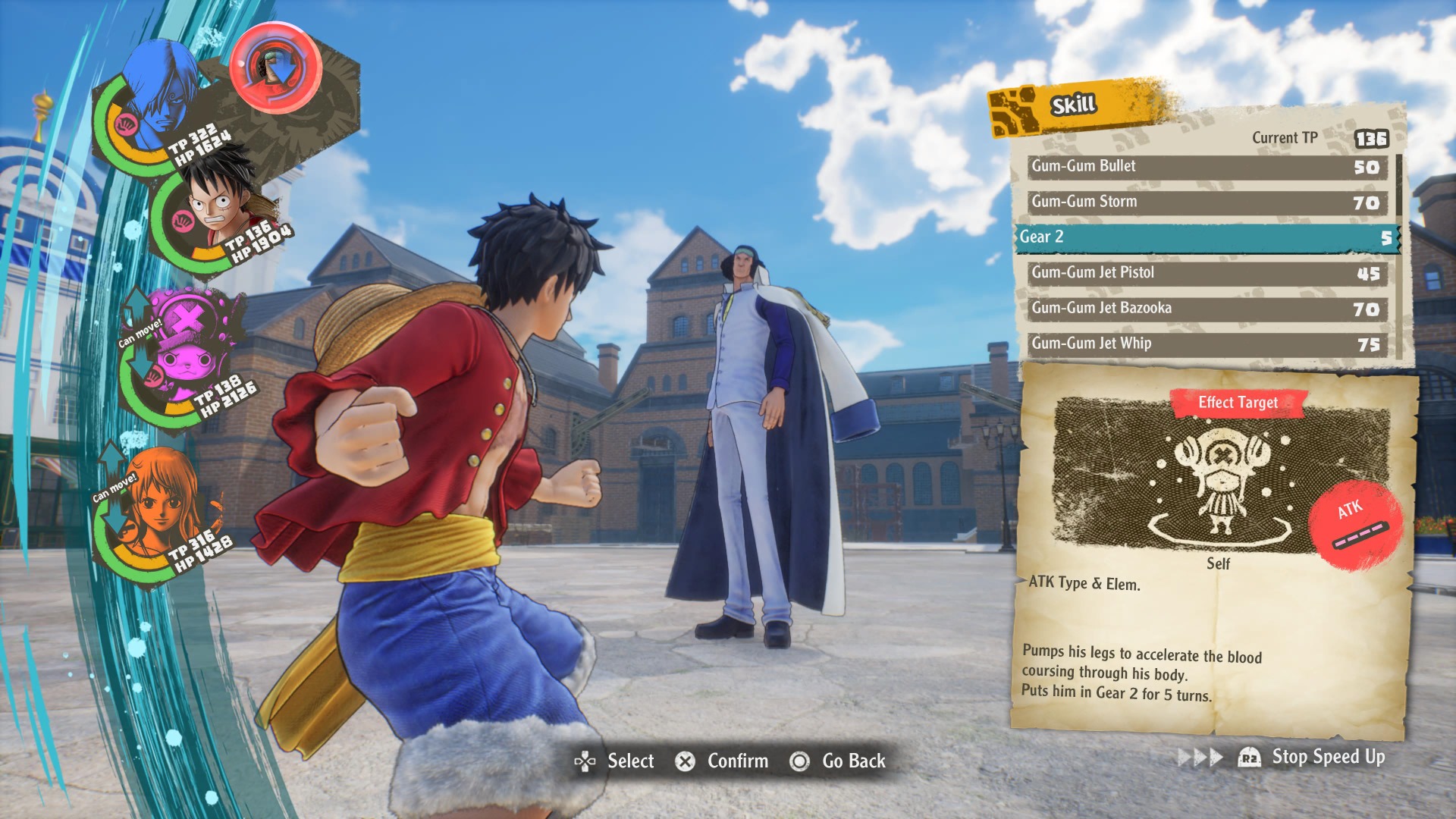 Without a doubt, One Piece Odyssey is the best-looking One Piece game to date and is a title that will provide many hours of fun. Fans of the series will be treated to a generous amount of One Piece flares and jokes presented in good quality, whereas newcomers to the franchise will be met with a fair glimpse of what made One Piece such a lovable Anima/Manga to its fans. Gameplay-wise, the game feels pretty basic and overly simple no thanks to how much it insists on holding the player’s hand. But even so, it still managed to produce many hours of fun and some moments of magic though I suspect these moments will only be appreciated by fans of the series.