When we first covered Eastward trailer presented at Indie World Showcase 2019, I was intrigued by Eastward. Mostly because of its main art aesthetics, top-down delightful pixel art environments, and bleak retro-ish soundtrack. As I watched the trailer, I was taken back to the beginning of the Chrono Trigger funfair scene and the whole nostalgia of my childhood kicked in. The questions come to mind on how the gameplay works and even what sort of RPG elements is being implemented into the game itself. The main question is whether this independent three-man work stands out from all the other indies or even triple-A titles out there.

The answer to this question is yes and no, both from a simplistic sense of yes, it can be great but at the same time a mild ‘no’ as many other issues indie titles are facing, Eastward lacks the courage needed to captivate players and draw them into an immersive experience, whether it be resources or storytelling confidence. Having said that, here is my review of Eastward, and hopefully you will be able to understand the answer to the above question.

This is first and foremost the strongest unique sell point of Eastward. Directly in your face deal, we get to see many beautiful pixel arts of the game as presented in the trailers. And I am happy to say that it was maintained throughout the game. The lighting of the environment shines a dim atmosphere highlighting a kinda rustic beauty yet at the same time a decaying world.

The environment and level designs feel more akin to a Zelda world but with a touch of modern eastern country look architectures. Each city is filled with wacky NPC characters that are not only wacky but also different in both shapes and sizes. Friendly and enemy NPC’s design in Eastward is diverse and uniquely varied as if they were designed out of a bunch of artist’s sketchbooks and each is filled with their pixel expressions as well. Because of this, I for one do enjoy talking to each and every NPC in this game and although they do not have voice acting – their many expressions carried their voice. In addition, the NPCs do interact with players via text dialogue, as their lines are typed with their own distinct typing sounds to portray their personalities and characters.

In my opinion, cutscenes in the game on one end receive a lot of care and attention to never leave any details out, which speaks volumes of Eastward’s team level of care, passion, and attention. On the other end, however, the cutscenes felt like the game has to handhold players 24/7 to make sure they follow up with the story plot. Combined with a few endless cutscenes, what was meant to carry the story and be handholding ends up dragging players through lengthy cutscenes while they are on the floor like getting nagged by your spouse all the time. Besides that on the plus side, Eastward simple form of writing makes skippable dialogue text easy to follow through. Therefore, the developers should be more confident that their story will not easily be missed or confuse players in a long run.

While each Npc’s has their voice typed out, the tunes in Eastward are definitely something else as composed by Joel Corelitz (Halo Infinite, Death Stranding). Its nostalgic factor of music approach has an almost trance-like synthwave approach that felt really refreshing but also carries the emotional weight needed to portray the upbeat tunes of a city, storytelling, combat, dungeons, and all the way to the underground caverns. The music will grow into players over time and I find myself humming to the tunes. I was also impressed with the music enough that I purchased one copy via Steam myself. For your listening pleasure, here are some samples:

Be that as it may, the sound in Eastward felt slightly lacking in terms of the sound effects resources department. One minute like Zelda – I find breaking barrels had a slightly more ‘oomph’ factor rather than breaking ceramics and glasses in the environment. And while Eastward storyline leans more towards a beautiful dark twisted world – having a merry expressive stinger sound alongside a victory pose at every loot I get, opening a secret door, or winning boss fights breaks the immersion I needed in this dark bleak world. Consequently, I’d prefer a lesser volume or a whisper of the breeze of stinger sounds in that respect to avoid damaging the sense of immersion that I needed to keep me invested in world-building.

The first thing to note would be that Eastward is actually a linear action RPG with less emphasis on RPG elements. As the main silent protagonist John, a man with no plan except his pan, and Sam, a bubbly talkative little girl with bubbly magic and personality.

While the duo embarks on a quest to discover the truth about the world and its inhabitants. With no dodging and sprinting ability, John’s main arsenal is his pan that dishes out countless bludgeoning swinging on any foes and is pretty handy in reflecting or pushing projectiles back the enemies. Sam on the other hand mainly stuns enemies with her light bubble magic. Both of them are switchable for players to control in both combat and separate tasks independently to solve a puzzle together. As far as the gameplay is concerned, the above-mentioned simple gameplay is the most crucial element. And when it comes into play with the level design, that’s when things get creative and become a form of smart design. There are so many creative ideas, that I sometimes do have some epiphany moments solving puzzles without tutorials. Besides covering the end goal for players to defeat a boss and puzzle elements, the level design goes through the steps to ease the player’s understanding of how to proceed without tutorials – a definite plus. 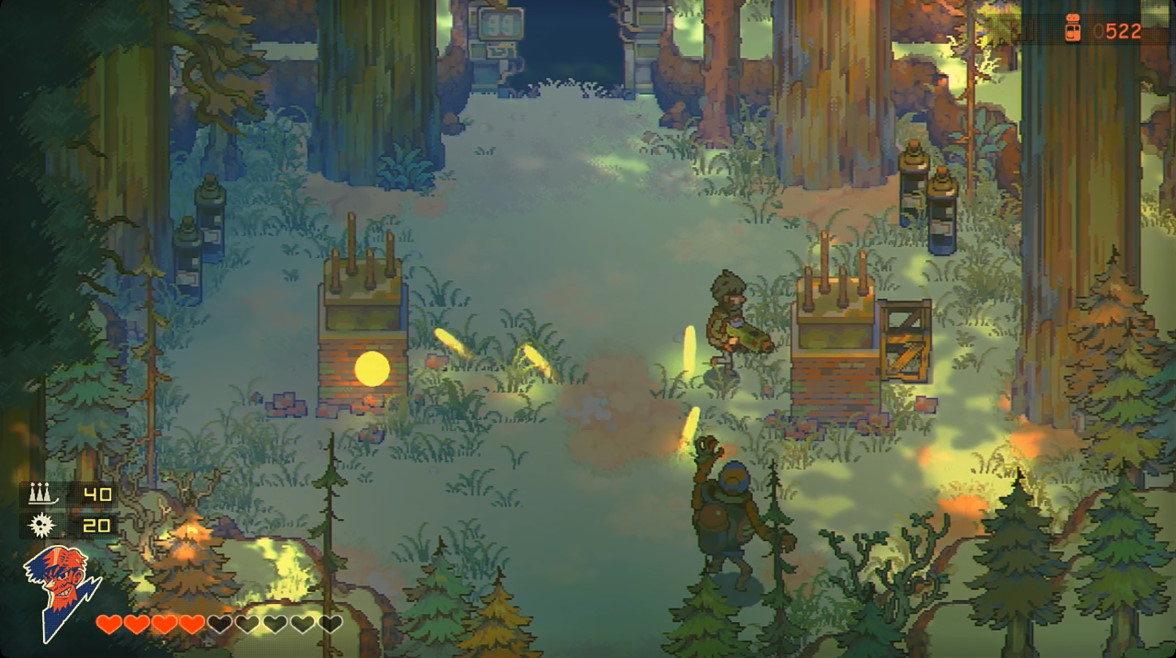 In between chapters, however, as John is able to collect new arsenals such as a gun that is upgradeable for more power or ammo to carry – the weapons didn’t actually matter in the end as the arsenals have lesser usage in comparison to the main pan he carries that serves as all damaging, stunning and reflect enemies projectiles too. While John has a charge attack, it is not as effective when compared to spamming pan attacks.

Aside from this, the main point of the game is gaining health pool as much as possible be it ending the chapters, killing bosses, or searching for secret loots. Therefore, making the end game felt like a breeze as John ends up being so tanky with a pan. There is also a cooking minigame, in the style of a slot machine, giving health and buffs to John that makes the late-game encounters less significant in comparison to the game’s progression.

Speaking of minigames, one of the minigames is an authentic 80’s RPG game called Earth Born, a dragon Quest-Inspired adored by Sam – which adds a lot to the game besides cooking. Other than that, there are many other minigames such as a shell game, batting cage, driving, harvesting, herding, and more. But these are sporadic occurrences in different towns and dungeons, which is unfortunate to me because it’s fun.

In Eastward, weapons, ingredients, and bombs are mostly accessible through story-driven means and can only be upgraded at a handful of shops scattered around the town. The side quests in Eastward are almost non-existent, along with the lack of loot drops of the above-mentioned items by the enemies and bosses, which supposedly promote the very RPG elements. In the end, I find myself going back and forth between screen areas to kill certain spawnable enemies in order to obtain the currency Salt to purchase the said items. 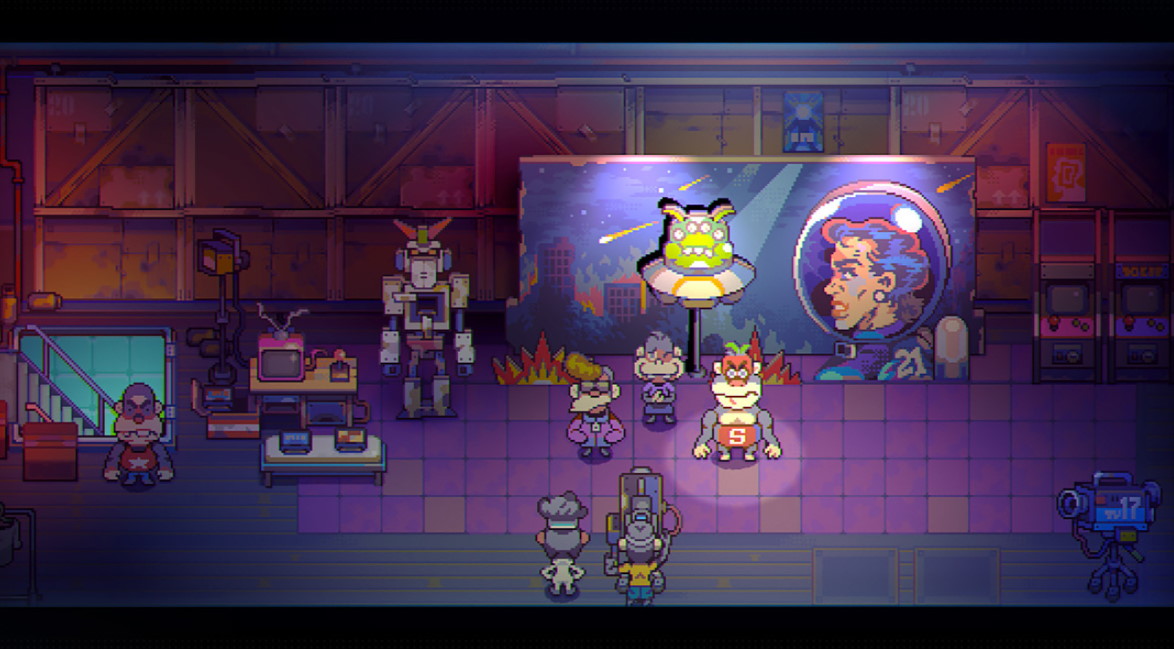 Upon finishing Eastward on 25 hours mark in a linear fashion. I would say that although the game lacks the tutorial UI, remarkably the gameplay and level designs ease me to understand what I can and cannot do in the environment, combat, and puzzle-solving. On the other hand, I am annoyed that certain elements, such as loot drops, ingredients, currency, and minigames, are seriously lacking in consistency and overlooked.

What Can Be Improved

Overall, the game feels inspired by Ghibli Studio animation and Chrono Trigger graphics combined with figuring out gameplay mechanics on your own, like a Zelda-like experience that is fun. In terms of minigames and gameplay moments, there are plenty of memorable moments added that fit well with the setting of the game, but they tend to be one-offs, which is regrettable.

This all culminates into a unique one-time or brief moment in time for me, and I would love to see a few more minigames implemented and more RPG elements incorporated into the game. It is my hope that the developers will take note of how they can improve this game in the next upcoming sequel or projects and be willing to take a riskier approach in the confidence of their product.