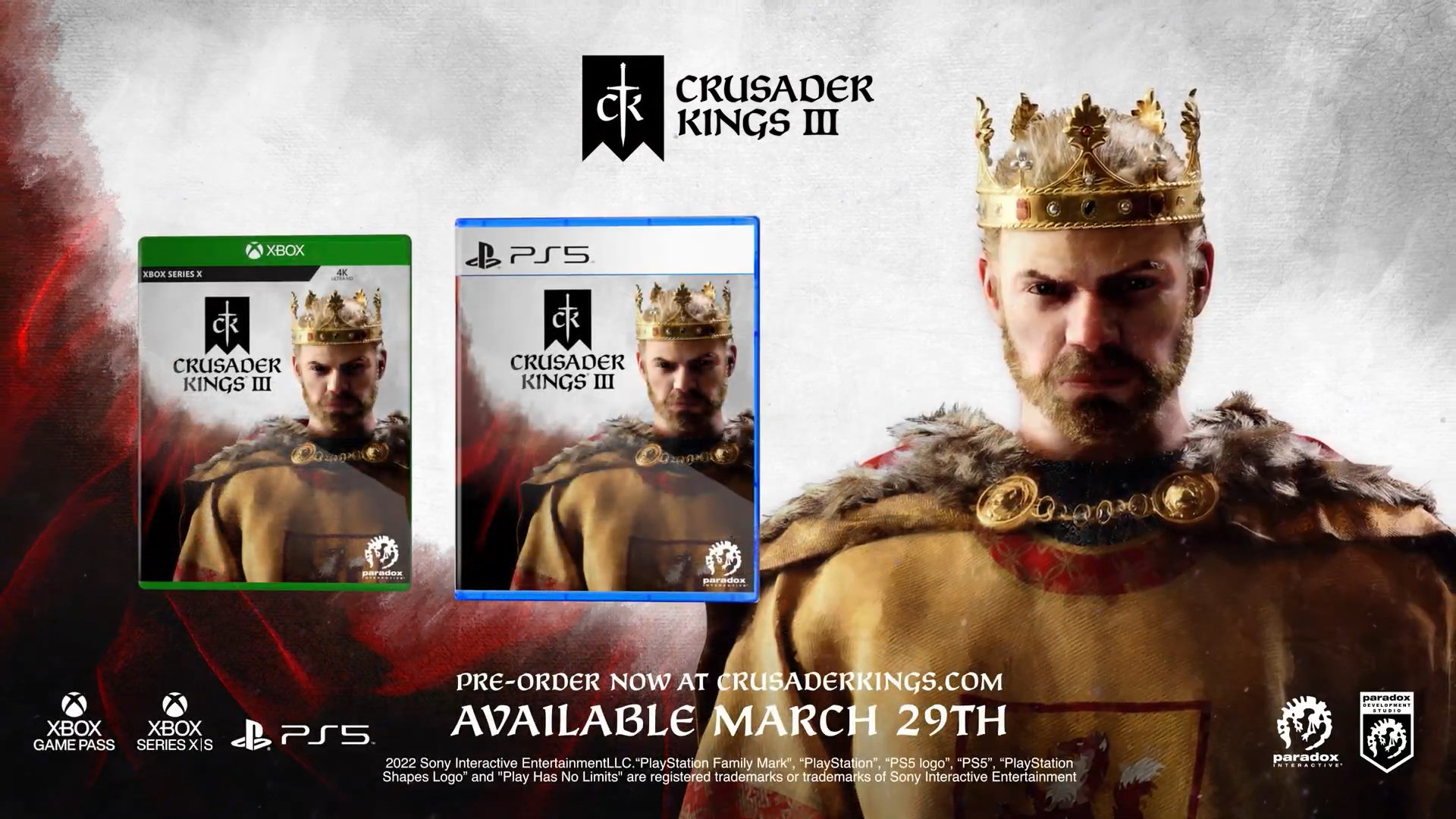 Your Sofa Becomes Your Throne: Crusader Kings III for Coming In March For Consoles

The noble pageantry of medieval grand strategy is coming soon to Xbox Series X|S and PlayStation 5 consoles. Paradox Interactive’s celebrated strategy role-playing experience Crusader Kings III will be available for consoles on March 29th, 2022, giving an entirely new group of players a chance to build a legendary dynasty in the quintessential historical strategy game. The console edition of Crusader Kings III can now be pre-ordered on both Xbox Series X|S and PlayStation 5

In partnership with the development team at Lab42, Paradox has adapted the dynamic and ever-changing gameplay of Crusader Kings III to a new environment, taking advantage of the unique characteristics of console play. Few other games have as rich a tapestry of strategic options, with political marriages to bind noble houses, brutal wars to enforce quasi-legal claims, personal relationships to unite a fractured realm, and even subtle scheming to undermine or eliminate rivals.

Crusader Kings III on console features an adapted interface and control scheme specifically tailored to larger screens and console gamepads. The all-new control map lets players quickly and easily navigate the game’s menus via triggers, bumpers, and quick flicks of the analog stick. The console edition also utilizes the key capabilities of the Xbox Series X|S and PlayStation 5, like super-fast load times for a seamless gameplay experience as well as Haptic and Adaptive Trigger controller feedback. Players will be able to switch between gameplay and other applications, like YouTube, using Quick Resume, where they can consult a tutorial on how to quell a peasant revolt.

PlayStation 5 users will experience the game’s stress mechanics themselves, as their DualSense controllers physically react to in-game events as they unfold. The more stress a character has accrued, the more resistance will be applied to the DualSense controller’s Adaptive Triggers, for instance. The PS5’s Activities and Game Help also provide a platform to assist new players as they take their first steps in the world of Crusader Kings.

Live the life of a medieval ruler and build history’s greatest dynasty from the comfort of your sofa, on March 29, 2022.
Pre-order now through Microsoft Hub or Playstation Store! 👑
► https://t.co/iH2DmsYmMT pic.twitter.com/wLIAFKhX3v

Features of Crusader Kings III include:

Revisit Cyberpunk Fantasy CRPG As Shadowrun Trilogy Is Arriving On Consoles On June 21, 2022

The Mafia’s take control in Empire of Sin, a character-driven strategy game coming to consoles and PC