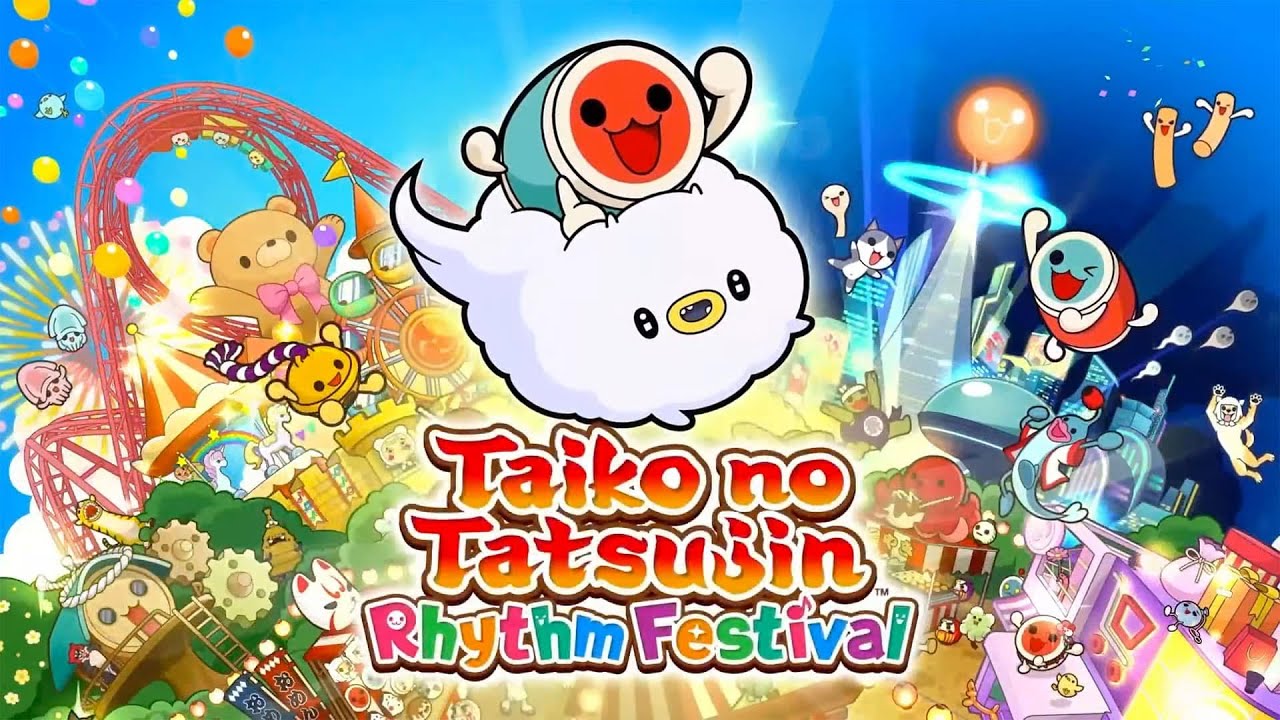 There’s always something solace about the arcade, a dimly lit place where fighting, music, dancing, and basketball collide in a center of colorful, vibrant sprites that evoke the atmosphere of semi-gambling, dancing floors, and discos. Nothing beats the arcade, and to put it simply, nothing in the arcade beats a Taiko no Tatsujin – a game that stands out from the rest of the crowd. With two drums, strutting out that demands everyones’s attention. And for the first time in my life, hitting those drums gives a sense of joy filled with songs that often spark that nostalgic anime-ish soundtracks all the way to something worth celebrating.

When I tried it out myself for the first time, hitting those drums to the beat fills me with a sense of joy, giving a sense of immersive feedback with heart-pumping tracks as the game responds to your hit either the drums (Red) or at the side rims (Blue) as points. That being said, it is pleasant to be given the chance to try out the Switch version of it. So here is my review of Taiko no Tatsujin: Rhythm Festival.

Taiko no Tatsujin: Rhythm Festival has not changed its core gameplay compared to the arcade version I played. Simply put, just hitting the drums to the sound of the rhythm as the red emoji face (drum) or Blue emoji (side rim) as the note emoji face moving from right to left that I adored. Hitting the notes correctly grants players points to achieve, potentially clearing the stage alongside a background of zany characters comes even more colorful. Completing a song calculates points to earn Don coins to buy stuff at the store such as costumes, instruments to change your tunes, greetings, and nameplates. So are there any songs for purchase you might ask? Well yes as DLC is in a separate store that is only accessible in the main game Taiko mode menu via song selections list under the ‘separately sold songs’ tab. 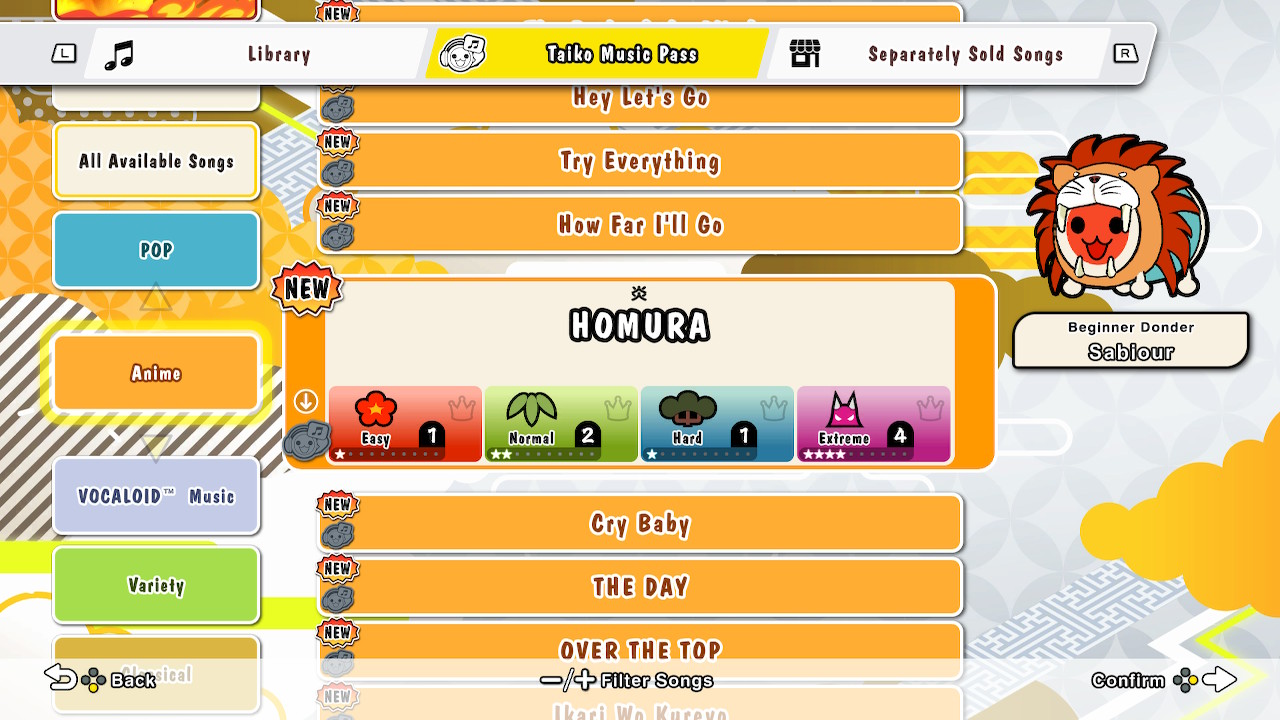 Suffice to say, the menu UI flow and design layouts felt somewhat convoluted and didn’t feel streamlined, like, for example, there are two options to go online be it the main Taiko mode or the Dondoko Town which shares basically the same function. There is also a +/- button to earn more rewards separate from the ones in the store, so keep an eye out for it as you may miss it at the beginning. 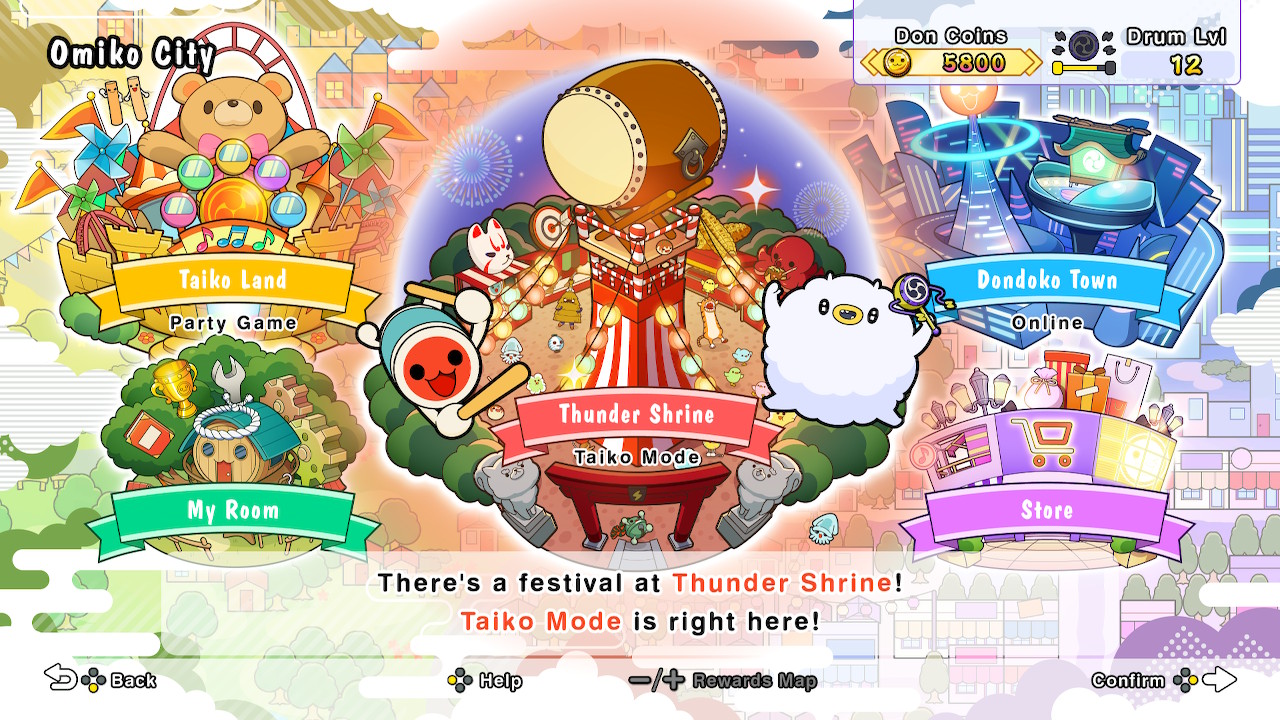 Although now with Nintendo Switch, there are multiple ways to play the game without using the drums, be it pressing the buttons via controller, joy-con by waving my hands like a madman or using a handheld via touch screen. Unfortunately at the point of this review, I do not have the Nintendo Switch drums to test it out so I ended up playing with all the other optional controllers available. Personally, my favorite way of playing this game is to use a handheld mode via tapping the Switch screen because of three reasons as per following: 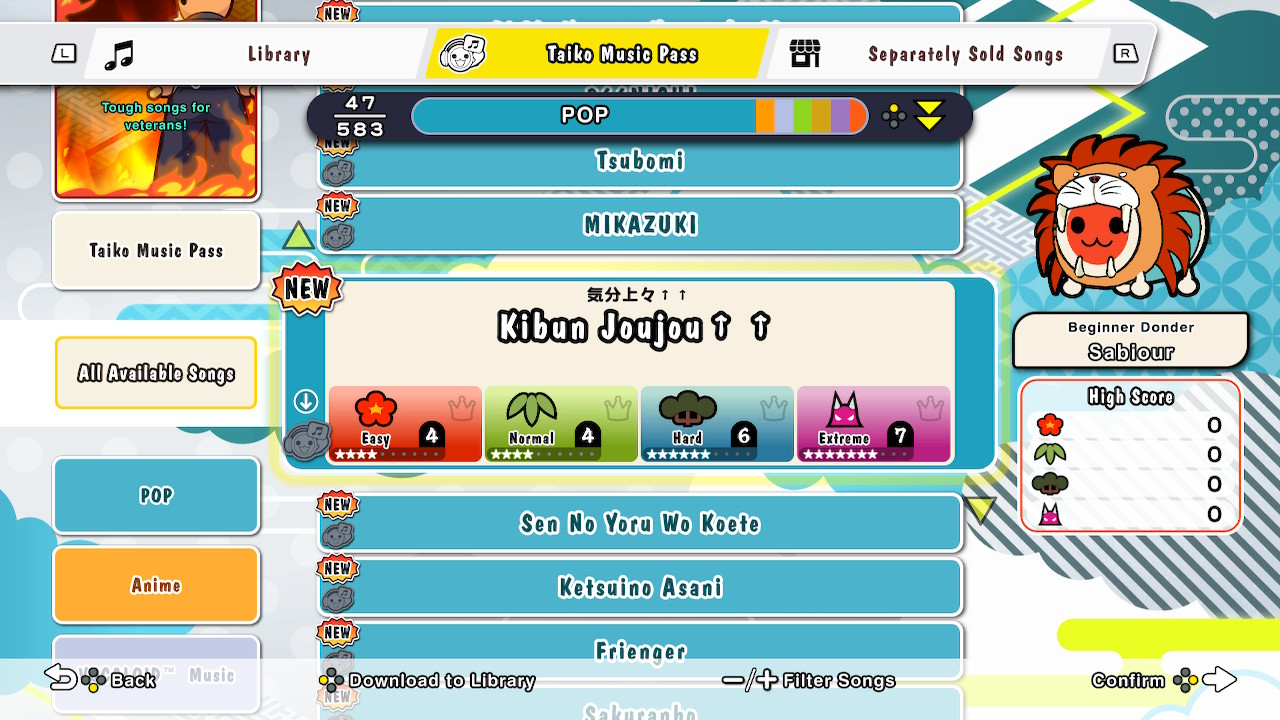 Other than that, the multiplayer aspect has not been kind to me as the game often tends to cuts off mid-game, and hardly a few rooms are available in Online Match Room. Alongside new gameplay modes such as Toy War aka disrupt opponents with your selected toys and Don-Chan band mode where you play with a band of friends aka Rock Band party game. In spite of this, the new gameplay Don-Chan band mode game only allows offline or locally shared controllers, which is unfortunate since I do not have a circle of friends who plays this niche game with. While I appreciate the gesture, I feel that the overall gameplay modes don’t add that much sense of variety whereby you still have to hit the right notes at the right time. In my opinion, a new form of gameplay has to hit me with a different minigame challenge like perhaps smashing as many buttons as possible against your rival or just pressing a fast note at the right time to catch a fish like catching goldfish with tissue paper at the Gion Matsuri festival as an example to give that sense of variety.

In terms of the main core gameplay, the songs have multiple tiers of control types, instruments, and flexibility in difficulty that can be both accessible or steep in difficulty curves as the emoji cursors move at incredible speed and with many variations. Fortunately for me, the Improvement Support mode is the most useful tool in the game that breaks down the chosen song and allows you to master it separately like when my parents/tuition teacher sat beside me during my math exams and pointed out my mistakes saying ‘lemme break down the formula for you’. 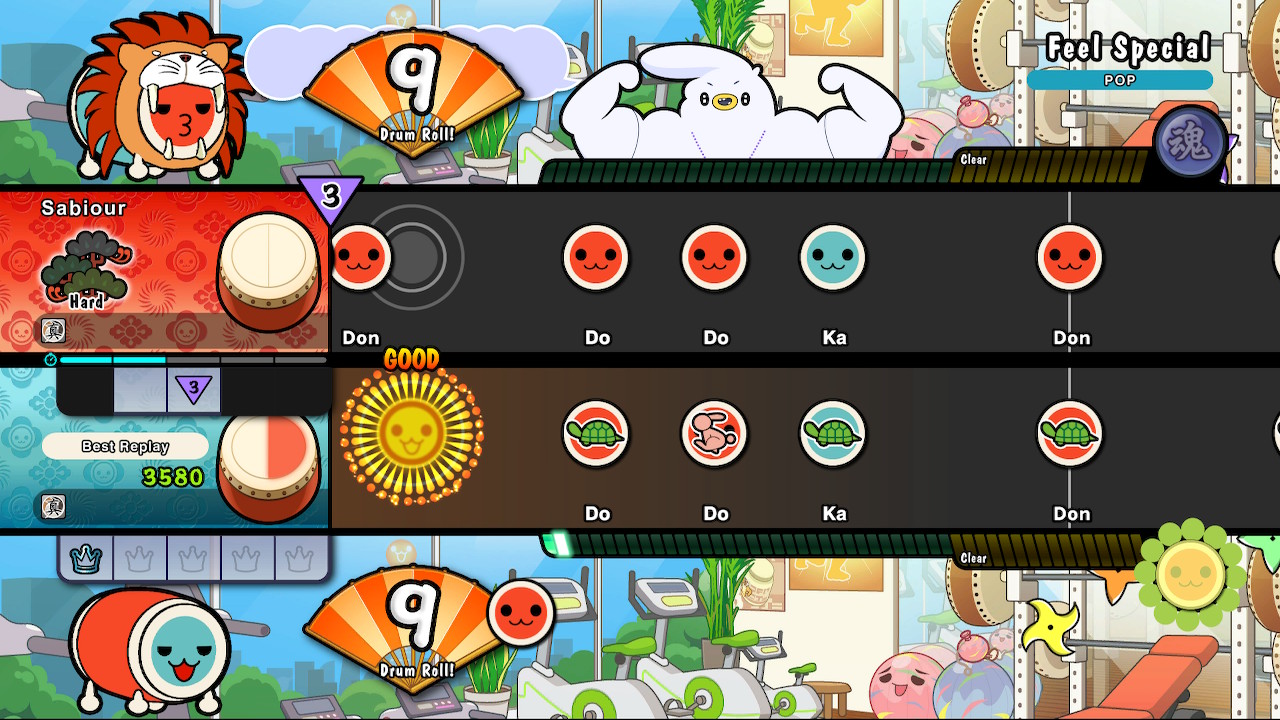 Design And Art – Sticking to the safe zone

This is a blast from the past as the designs are cartoonishly vibrant with Japanese aesthetics mixed with a drum smiley-faced mascot and some zany characters dancing in the background. Brimming with festival-themed designs and visuals, yet at the same time cutely designed. Nothing can go wrong as the art directions in Taiko no Tatsujin: Rhythm Festival retains the same flavor as the past predecessors.

That being said, on the niche side while playing the game; the different characters animations dancing in the background tend to stick to a fixed routine which could lower my excitement to a form of repetition and eventually clear the stage without any more visual excitement. Additionally, the characters should have a trip animation as well if the player misses the notes. 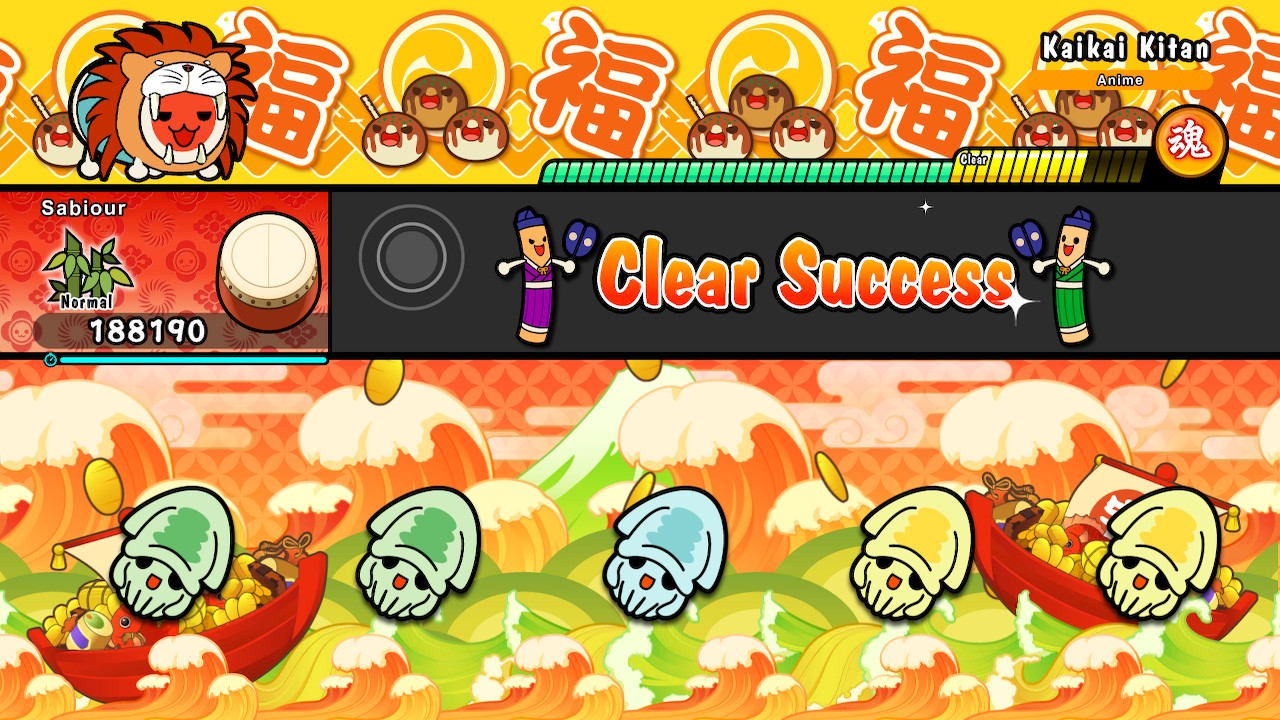 With over 78 songs selection in the library playlist to choose from such as anime genres, pop music, movies, classical, and Vocaloids. As part of the review copy, I already have access to Taiko Music Pass with 583 songs to choose from, but I believe this is part of a DLC or subscription pass behind a paywall. In light of that, I believe that certain songs should be locked behind achievements that can be acquired as players progress through the story or pass a difficult song and unlock new ones in the process.

I’m currently playing it, and while it is a fun selection of song, it either leans towards way too many short fast tempo songs, like the opening of a video or drama series, or the song selection tends to emphasize the excitement of the song, rather than giving it a more varied vibe, like Vikings or Metal. Hence I think some of this short songs should have a longer version of it as well (probably achievable unlocked too) to play with that will make it, even more, a worthwhile experience.

What I Liked About Taiko no Tatsujin: Rhythm Festival 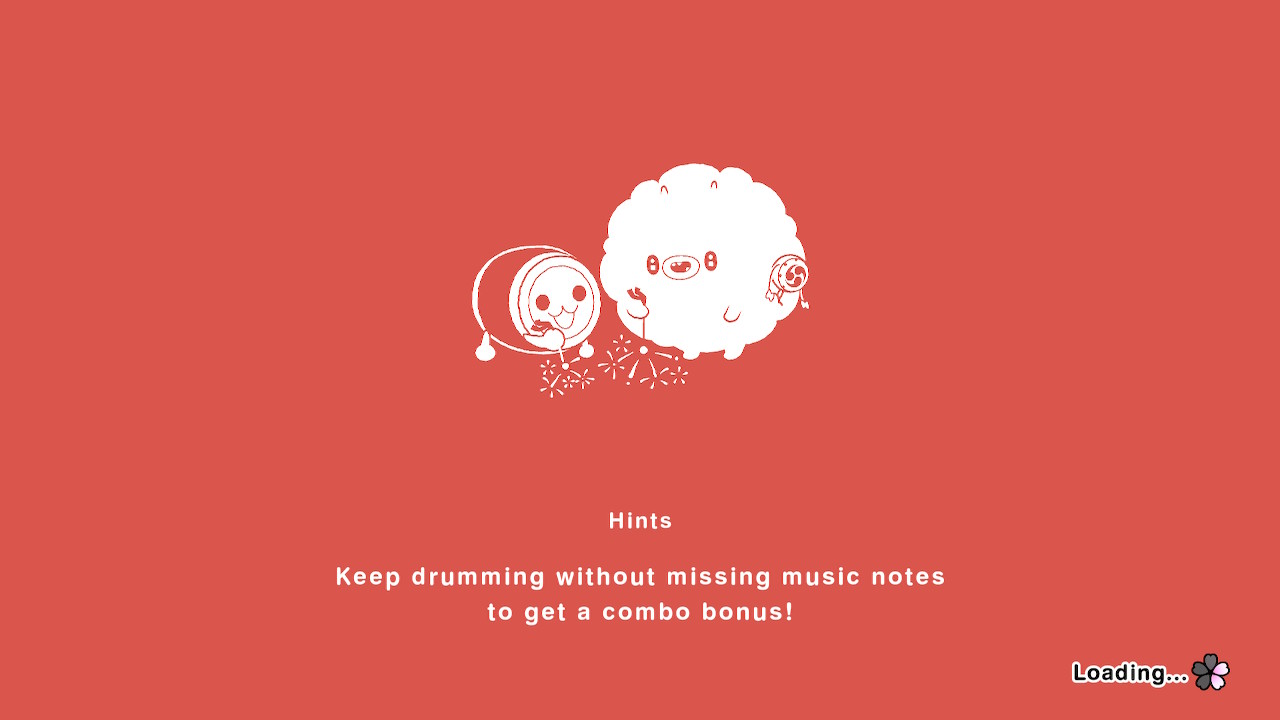 Verdict – This Brings Back Memories

My question to you readers is ‘Would you go far to scratch that arcadey itch again?’. If it’s a yes then by all means ‘Get it’. To be able to relive the arcadey moment of beating the drums at a Taiko no Tatsujin: Rhythm Festival, in my opinion, you need to buy the drum set to fully have that immersive arcadey experience. If you only have a pro-controller and a joy con like myself, the experience felt somewhat lacking as both lack the provided experience needed to feel the burst of a drum being hit as you smash the button or move your wrist to the beat. But personally, the handheld version is the second best thing to me as it has a visual fidelity or less motion blur to the cursors and is more responsive to your fingers tapping.

Historically, Taiko no Tatsujin has always been the benchmark in the arcade scene, and although it is stuck in the past now with the same songs, game mode, and character designs, it has always been a fun game in general. In spite of its set of downsides, if you play it long enough – it can still be an enjoyable shine on its own. Do note that a demo version of the Nintendo Switch is also available for you to try before you buy.