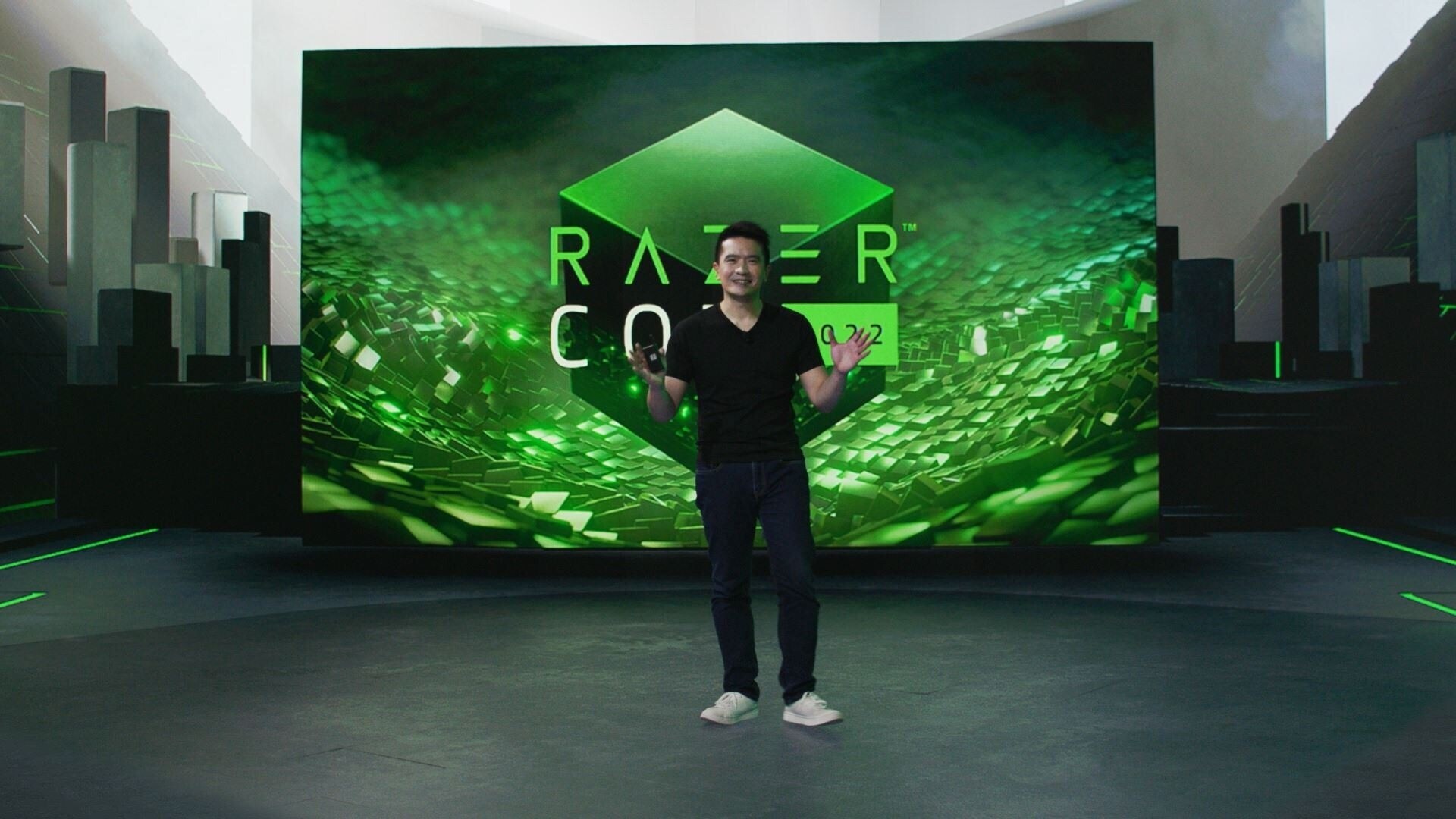 Razer, made RazerCon 2022 a phenomenal highlight for gamers worldwide. On October 15th, viewers from all over the world tuned in to watch Razer CEO Min-Liang Tan announce how Razer will change the future of mobile gaming, as well as a plethora of other exciting upcoming product announcements, and new exclusive partnerships.

As an event truly For Gamers, By Gamers, Razer worked closely with partnered publishers and developers to feature exclusive content. Hidden Leaf Games showed off the exclusive world-first premiere of gameplay for Fangs, and PC Builder Simulator 2 was presented live on stream by RazerCon hosts Rich Campbell and Cyr from OTK network.
Continuing the tradition of carbon-neutral streaming, RazerCon 2022 was powered by green energy, in line with the brand’s commitment to sustainability. In case you missed the event, you can view a recorded version here.

At RazerCon 2022, the community got early insights into many upcoming Razer product launches including the Razer Edge ultimate Android gaming handheld, the premium Razer Enki Pro Automobili Lamborghini Edition gaming chair, more Razer audio options for PlayStation and Xbox, and an update to the fan favourite Razer Kraken Kitty line along with much more. 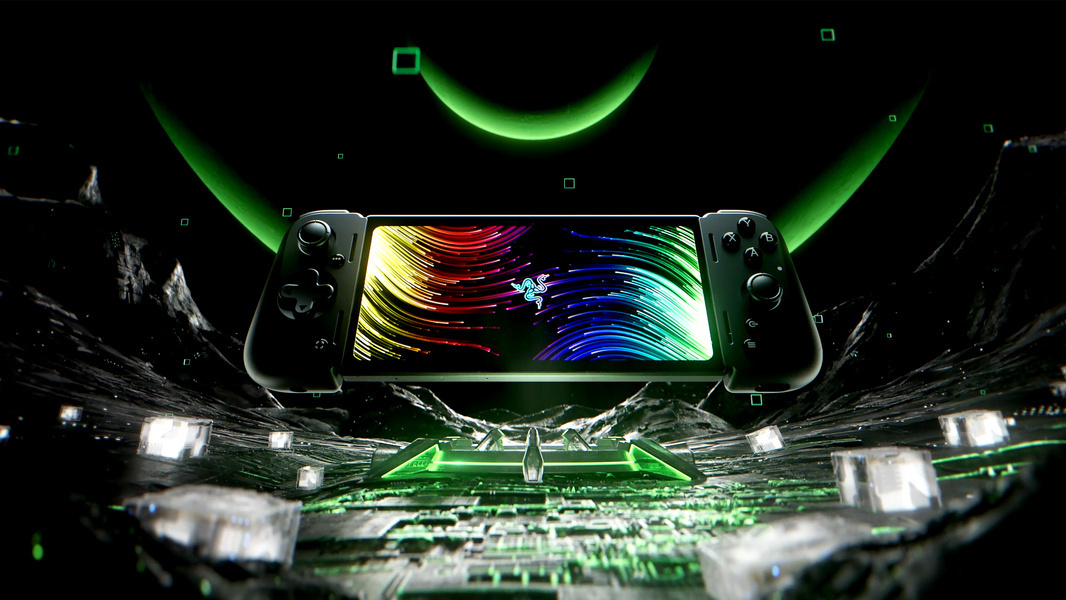 Equipped with an advanced 6.8” AMOLED display with a 144hz refresh rate at 2400×1080 FHD+ resolution, the Razer Edge provides 87% more pixels than competitive offerings. Powered by the latest Snapdragon G3x Gen 1 Gaming Platform, specifically engineered to provide the best gaming performance while on the go, the Razer Edge boasts a 3Ghz octa-core Kryo CPU with an Adreno GPU built for maximum graphics and industry-leading performance per watt.

For long-lasting battery life over hours of gaming, the Razer Edge is powered by a 5000mAh capacity battery. Available in both Wi-Fi or Verizon 5G models, the Razer Edge will initially be offered for the U.S. market only and comes bundled with the new Razer Kishi V2 Pro, featuring all the award-winning technologies, customization options and features of the Kishi V2 mobile controller, with two additions:
Razer HyperSense advanced-haptic feedback and a 3.5mm audio port.
Microswitches in the face buttons and D-pad deliver tactical response and instantaneous actuation to yield true console-quality controls on a handheld gaming platform.

The Razer Edge 5G will be available exclusively from Verizon. Final pricing and availability will be provided by Verizon.

The Razer Edge Wi-Fi will be available January 2023 at $399.99 USD exclusively at Razer.com and RazerStore locations. In order to reserve your Razer Edge Wi-Fi, Razer.com is accepting refundable preorder deposits of only $5 from U.S. based customers to ensure you are guaranteed one of the first units upon official release. Interested users can reserve their Razer Edge unit here.

With its iconic design, it’s not surprising that the Kraken Kitty is a fan-favourite amongst the Razer community. With the new Kraken Kitty V2 Pro, creating multiple stream personas is now possible thanks to Razer’s innovative new interchangeable ears concept.

As a follow-up to the popular original, the Kraken Kitty V2 Pro is a Razer Chroma RGB wired headset that features interchangeable kitty, bear, and bunny ears. All included in the box, these adorable ear designs are quick and easy to swap out so that streamers can switch up their style and express their unique personalities and passions on stream. All three ears come with the ability to react in real-time to stream events, as they are powered by Razer Chroma RGB’s over 16.8 million colours and countless lighting effects. 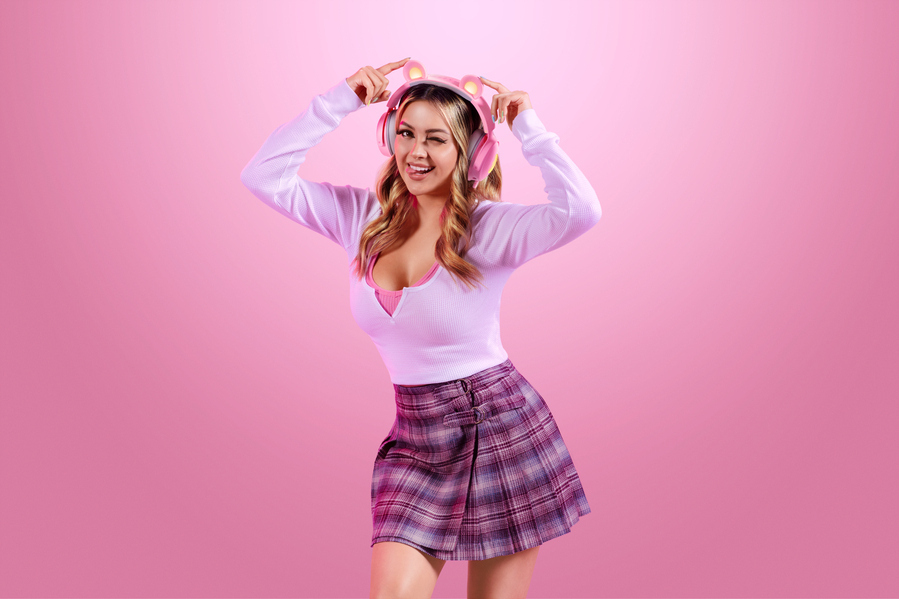 With these expressive customization options, streamers can make their content stand out even more and engage their viewers with earcup lighting that reacts to emotes, alerts, and more. 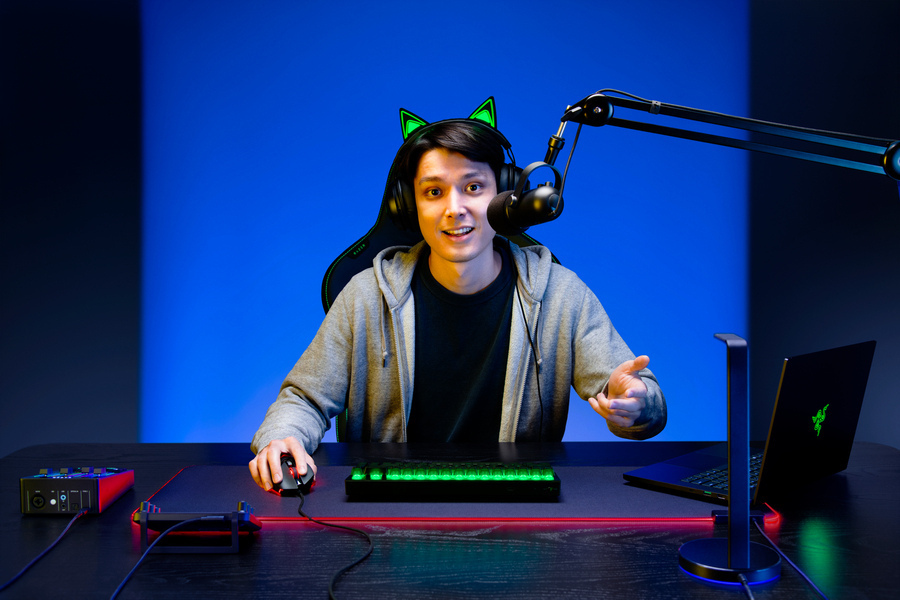 The Blue Screen is a chroma key panel that adds a new level of creativity and imagination for stream backdrops. Crafted with premium fibres, the Razer Blue Screen allows streamers to create their own worlds and display the most seamless and immersive backgrounds on a wrinkle-free backdrop. Used in professional moviemaking, blue screens allow for the cleanest keying and are ideal for streamers who want to easily change their streaming backgrounds to reach new levels of creativity and engagement.

While compact, the Blue Screen is a height-adjustable 94” durable backdrop that is quick-deployable for fast setup, and collapsible for storage. Boasting Razer HyperSpeed technology, both headsets can connect over an ultra-fast 2.4GHz wireless connection ensuring seamless, low-latency audio that meets the demands of competitive gaming on numerous platforms and 30 hours of battery life.

Designed for gamers on the go, the Razer Hammerhead HyperSpeed are wireless multi-platform gaming-grade earbuds with active noise cancellation (ANC) technology for a distraction-free audio experience and untethered freedom. 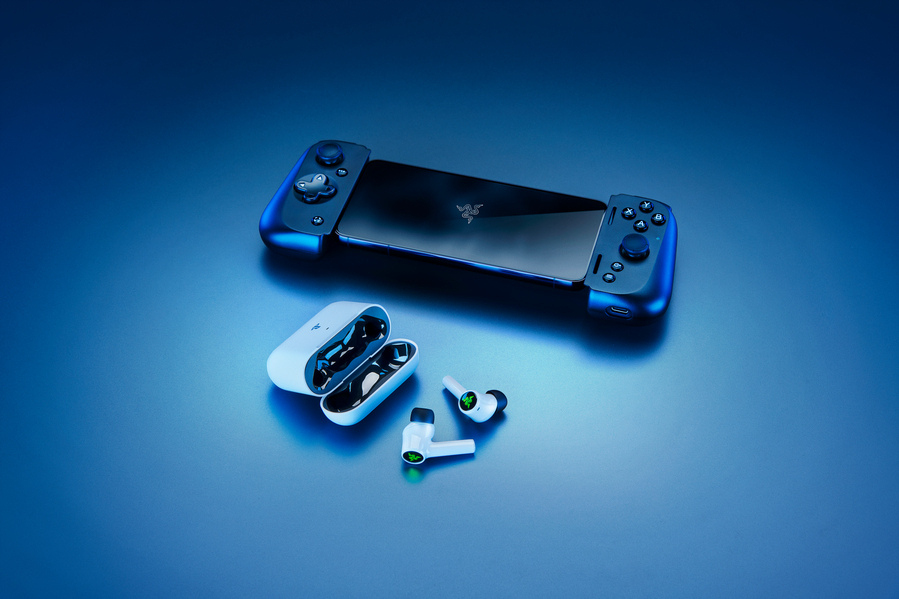 Featuring dual environmental noise cancelling (ENC) microphones for vocal clarity while communicating in-game or on calls, the Razer Hammerhead HyperSpeed is powered by Razer Chroma RGB and boasts 30 hours of battery life with the included charging case for all-day use. With 2.4GHz gaming grade wireless (with the included Type C dongle) or Bluetooth 5.2 connectivity, gamers will be able to eliminate distractions to play anywhere and carry everywhere from console to mobile.

The included Type C HyperSpeed dongle allows gamers to lower audio latency, giving these earbuds gaming-grade performance.
For more information on the Razer Hammerhead HyperSpeed – PlayStation Licensed*.
It will be available in November 2022 starting at $149.99 USD / €179.99 MSRP at Razer.com and at select retailers.

For more information on the Razer Hammerhead HyperSpeed – Xbox Licensed. It will be available in November, 2022, starting at $149.99 USD / €179.99 MSRP at Razer.com and at select retailers. 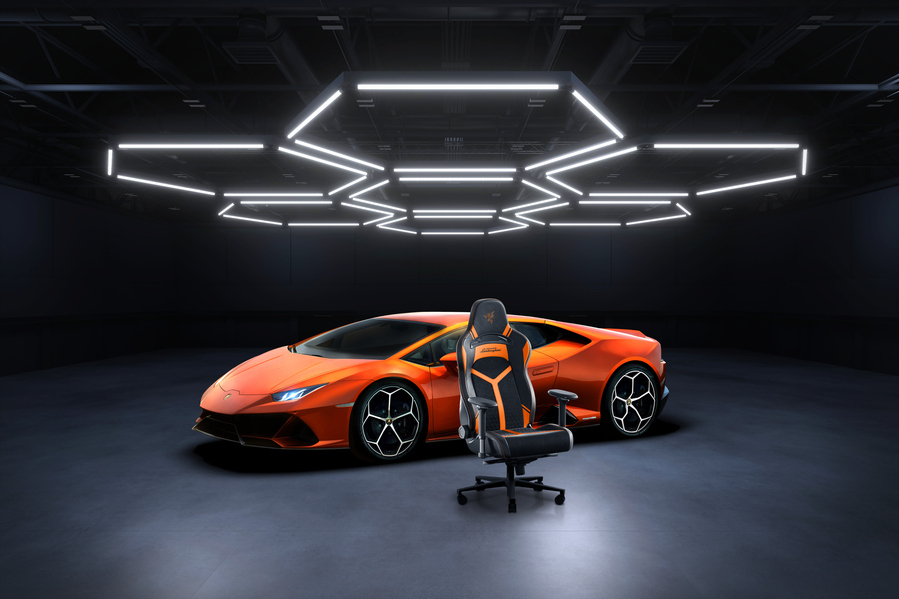 The Razer Enki Pro Automobili Lamborghini Edition will be available in December 2022, starting at $1,299 USD / €1,499 MSRP at Razer.com and RazerStores.

For the Community – New Colorways for Fan-Favorite Peripherals Since 2017, Razer’s unique colourways have captivated gamers worldwide. With the expanded colourway lines, gamers can now customize their set-up to match their own personal expression and bring out their best performance while gaming.

Last RazerCon, Razer announced its partnership with luxury watch manufacturer, Panerai to preserve the oceans, calling upon fans to “make time for our ocean”. Since then, the two companies have joined forces to invest in research to support marine species focusing on manta rays. 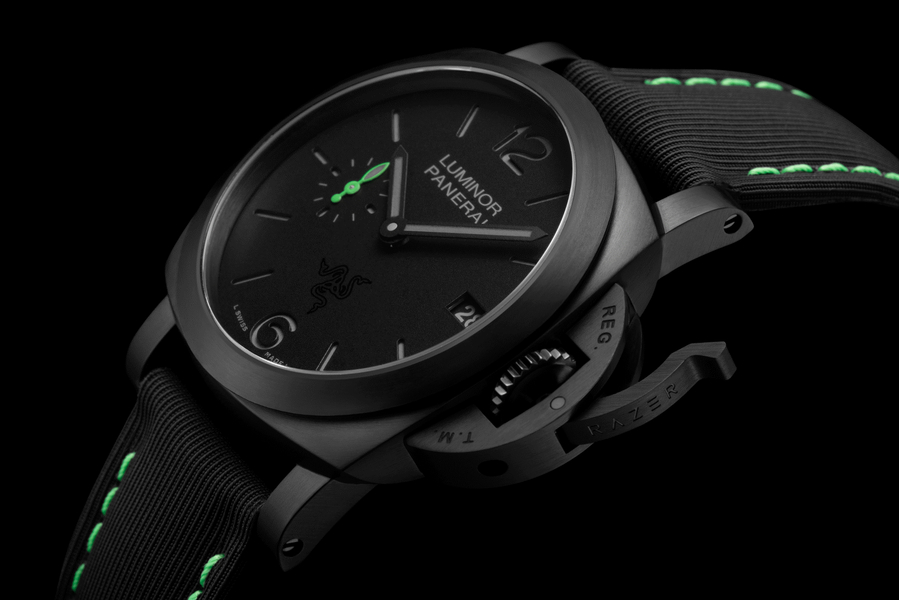 A year later at RazerCon 2022, Razer and Panerai have finally unveiled the highly anticipated limited edition Luminor Quaranta Razer Special Edition. Jointly designed by the two brands, the watch combines Panerai’s watchmaking know-how with Razer’s iconic aesthetic. Inspired by Razer’s signature colours, the sandwich dial features Super-LumiNova that illuminates green, complimenting the electric green on the small seconds hand, and strap stitching of the timepiece. Subtle engraving of the triple-headed snake can also be found on the caseback and dial, while the unmistakable Razer wordmark is displayed on the crown-protection bridge.

There will be only 500 pieces available for sale exclusively through Panerai boutiques and Panerai.com.

Razer Chroma RGB is the world’s largest and most widely used lighting system for gaming and lifestyle devices, allowing users to customize, control and synchronize their lighting set-up across multiple devices, from mice, keyboards and headsets through to chassis fans, speakers and room lights. Announced at RazerCon 2022, Razer Axon takes the power and flexibility of Razer Chroma RGB and brings it to life on the desktop with a range of premium, high-quality animated and static wallpapers that react in real-time with Razer Chroma RGB compatible devices, bringing new depths of colour, action and immersion to the gamer’s desktop. With a huge catalogue of images from video game franchises, fan-favourite Razer wallpapers, specially curated photos, and more, there’s something for everyone within the Razer Axon App – and all of them will light up the desktop in an amazing display of synchronized colours.

Every wallpaper is Razer Axon compatible, so gamers can add their own wallpapers and use Razer Axon to manage a playlist of wallpapers to unleash a whole new level of awesomeness. Gamers with multiple monitors can enjoy Razer Axon too, with its multi-monitor support, letting gamers truly customize their set-ups like never before.

To celebrate the launch of Razer Axon at RazerCo Razer Axon n 2022, the first 10,000 users to download Axon and redeem the code “#RAZERCON2022” will receive a set of limited-edition RazerCon 2022 wallpapers. And for a chance to win a Razer Chroma accessories bundle, users can download and apply any Razer Axon wallpaper to their PC monitor, take a picture or video of their gaming setup with the monitor and Axon wallpaper in view, and post or share it across Tiktok, Instagram, Facebook, or Twitter with the hashtags #RazerAxon and #Razer before 23:59 PM PST October 31, 2022. Razer Axon can be downloaded here.

The MMO King Is Back And Better Than Ever: Razer Launches The New Razer Naga V2 Pro