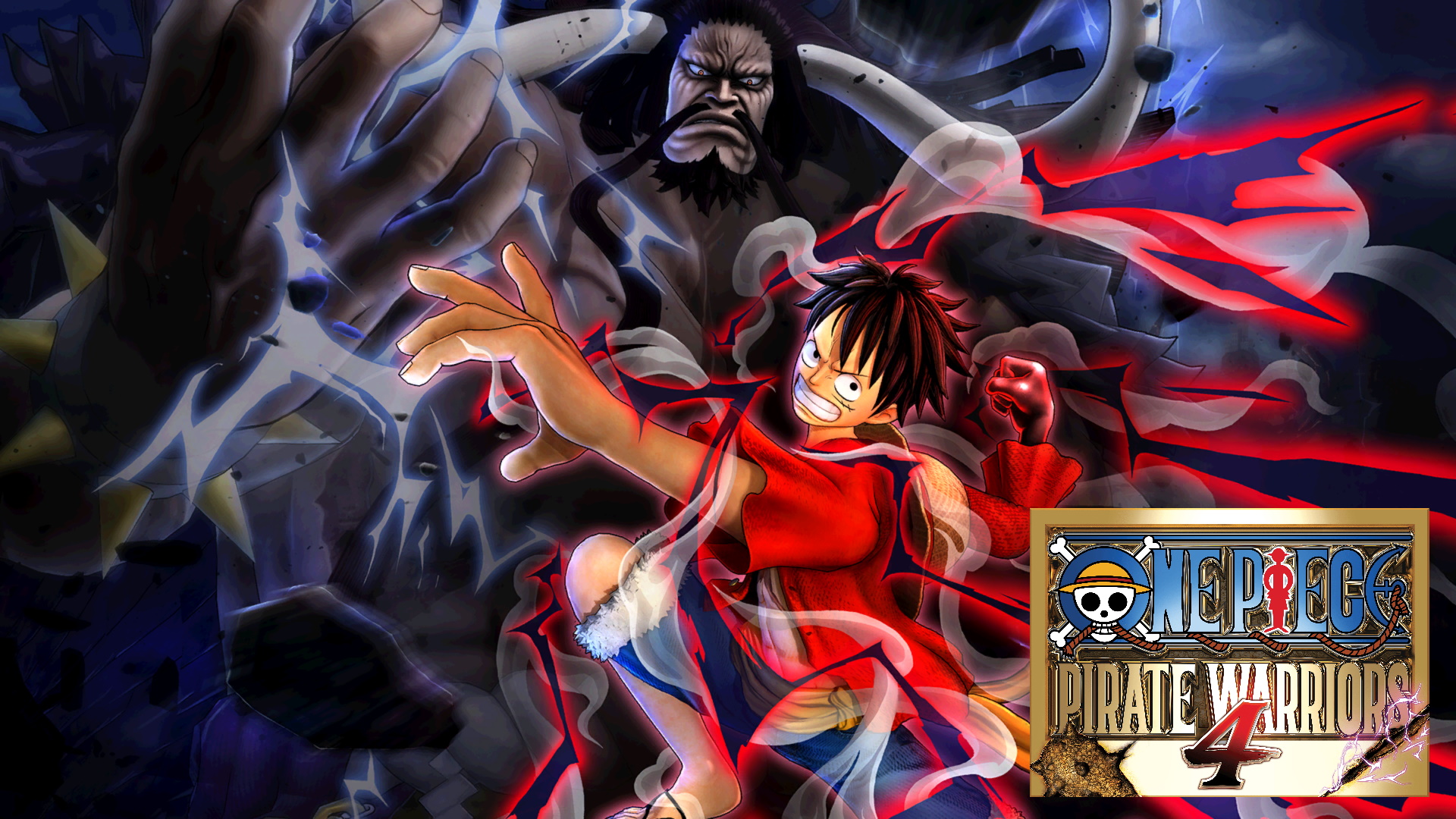 One Piece Pirate Warriors 4 Review – The ‘Beat Them Up’ Simulator 2020.

One Piece Pirate Warriors 4 – For those of you who are already familiar with this genre, then this game is what the games before it is, a Musou game. For those of you unfamiliar with the genre, a Warriors or Musou game is a real-time high pace action-packed hack and slash game where you can send hundreds of enemy flying by just button mashing. A simple no brainer game. But if you are looking for something with a little more ‘depth’ that challenges your mind, then walk away right now. A ‘Warriors’ game rarely requires skills and this one is no exception.

For faithful followers of the still on-going One Piece Manga and Anime, this game offers no surprises in its campaign. There are 6 playable Arcs, each carrying around 5-6 chapters of gameplay. The Arcs covered this time are – Alabasta, Enies Lobby, Summit War, Entry to the New World, Whole Cake Island, and Land of Wano. The Land of Wano arc in the game is a ‘Game Original’, a totally made-up story independent from the main series. 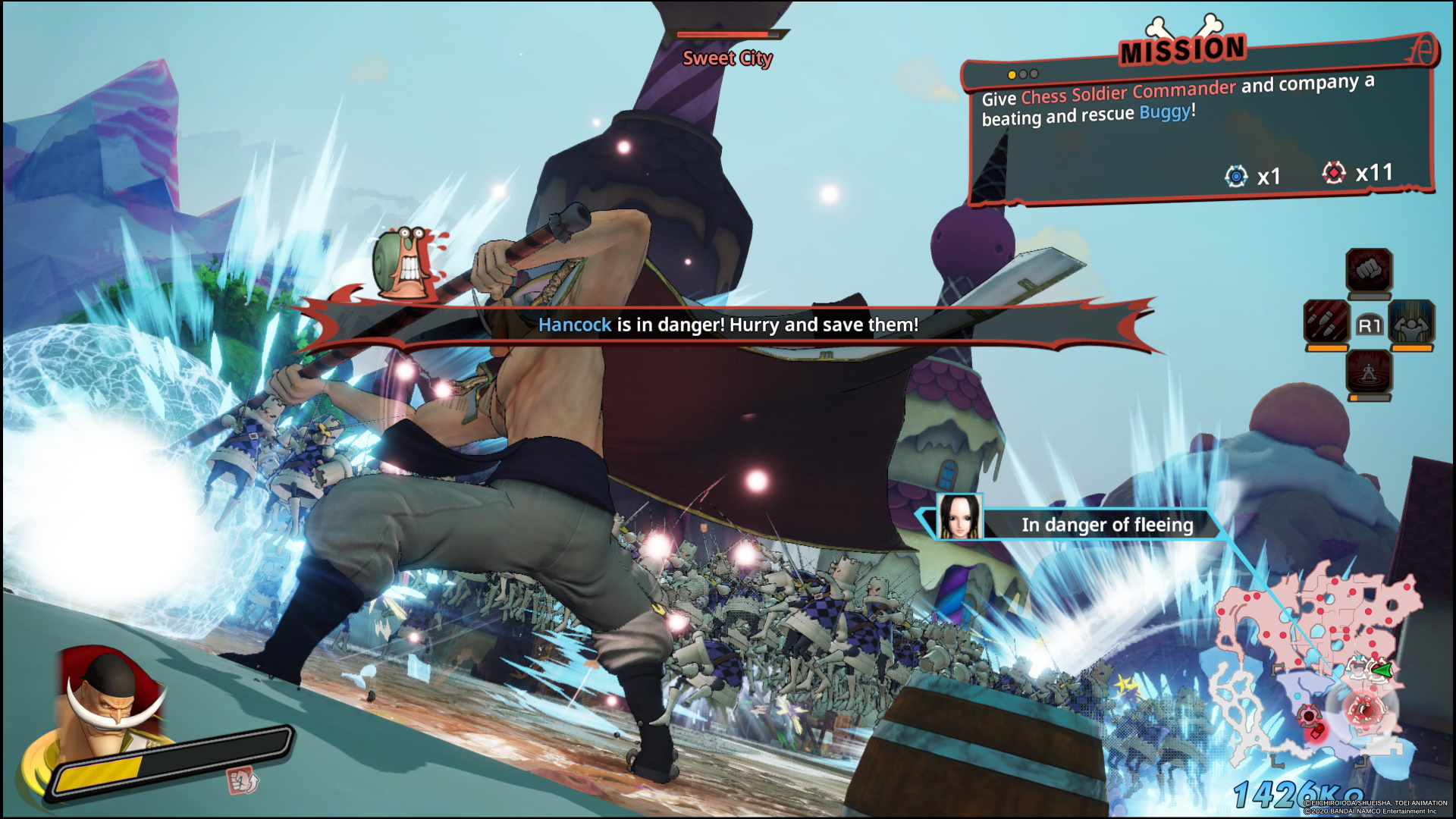 The gameplay experience is formed by 3 playable modes. The Dramatic Log mode that is essentially the campaign mode, where you’d play through a series of notable events using only characters connected to those events. The Free Log mode where you get to replay any Dramatic Log missions using any characters you have unlocked. And Treasure Log, a mode where all the scenarios and teams are made up (unrelated to the main plot), offering 3 timelines you can play from – East Blue, Grand Line, and New World, using whichever characters you’ve unlocked.

If you have been faithfully keeping yourself up to date with the latest on-going in the One Piece universe, the first two logs would just serve as a reminder of what you already know. They can be boring to go through as far as my experience is concerned and it’s not just because I already know the ending of each Arc so far. For example, some scenes are recreated using the game’s own graphic engine which although looks reasonably acceptable from a zoomed-out perspective during combat, is just not powerful and detailed enough to produce a quality cutscene. As a result, many supposedly memorable cutscenes ended up looking like a disaster.

I’ve only forced myself to complete the campaign mode (Dramatic Log) for 2 main reasons – To unlock characters hidden behind campaign missions’ progression and to check out the developer’s version of Land of Wano Arc. The latter was rather disappointing. The story was weak and it seems like the entire’s arc sole reason to exist is so that the developers could introduce one of the Yonko, Kaido, as a playable character at the end. 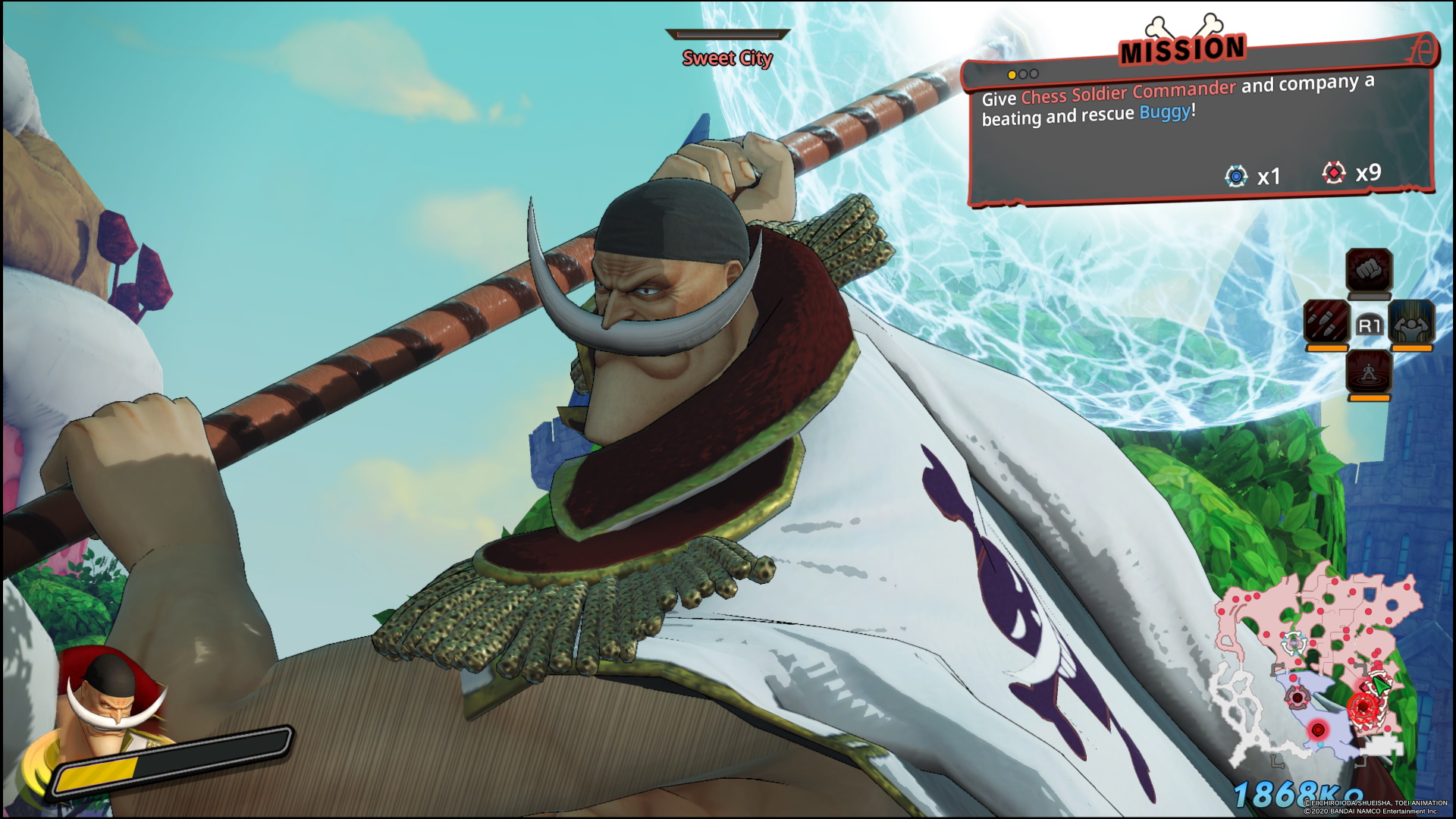 The treasure log offers the best experience so far, being full of playable scenarios and the fact that the teams are mixed. For example, instead of just playing as and teaming up with the good guys, I really appreciate the fresh perspective of being able to team up with the villains and fight the good guys instead. I’ve spent most of my time in this log farming the currencies needed to upgrade my characters further, either solo or through online multiplayer.

The solo experience is not bad and is in my opinion how the game should be played. Too many people will just amp up the confusion in this fast pace game. Some will rush unnecessarily and get themselves into unneeded trouble, and some will just fall behind. The Multiplayer option is available throughout all 3 logs, you can either request to join an existing match or host your own and wait for others to join. I’ve never seen anybody hosting or joining my game in the first 2 logs, only the treasure log is full of people hosting/joining online sessions. The online gameplay is always co-op, players join a session of two or four players, pick the character they want, and head out to whack the crap out of the A.I. controlled opponents. The only problem I’ve encountered in this area is the average waiting time for a game to start is about 10-15 minutes. There are many players in this game, but not many of them prefer to play online.

One of the main attraction in this game is you get to play as most of the fan favourite characters from the One Piece universe. 43 of them in total will be playable, some from the start and some behind a progression wall waiting to be unlocked once certain conditions are met. The entire straw hat crew including Jimbei is playable. The current 4 Yonkos and Whitebeard are playable. Some former Shichibukai members like Corcodile, Dracule Mihawk, Boa Hancock, Donquixote Doflamingo, Trafalgar Law, and Kuma are playable. Moria is not in the game. Marco, as well as Portgas D. Ace from the Whitebeard crew are playable. The Vinsmoke siblings – Reiju, Ichiji, Niiji, and Yonji are playable. Some other notable characters like Sabo and Ivankov of the revolutionary army and Rob Lucci (CP9 version) are playable as well as some pirates from the ‘Worst Generation’ also made it. 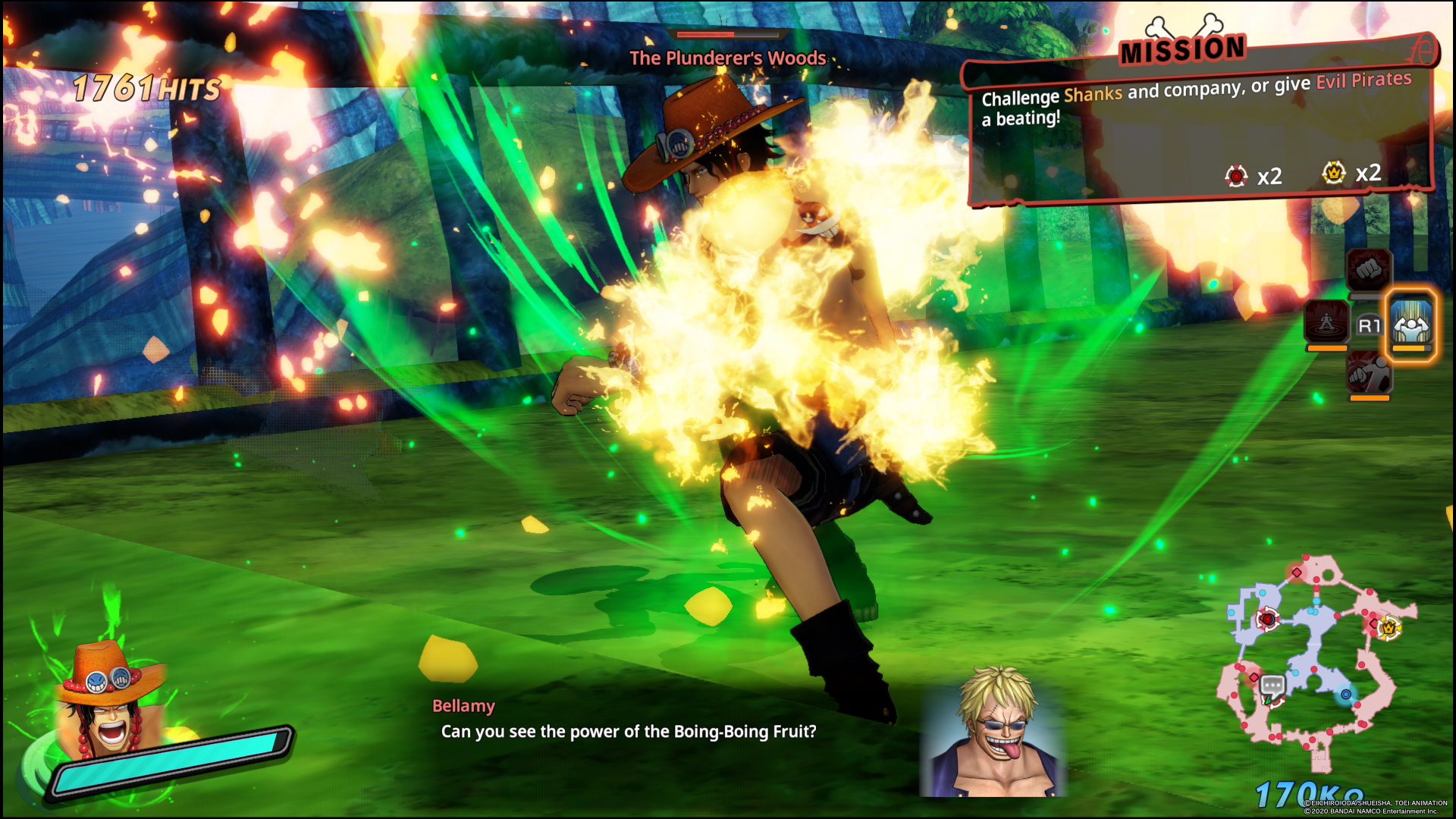 There are 3 skill trees, one of which is universal. Any points invested in this tree would see all your other characters enjoying the same benefit. The remaining 2 skill trees are specific to individual characters and here’s where the pain kicks in. Each skill tree has at least 20-30 multiple tiers items to level up, now imagine having to gather enough currencies to unlock every single thing for all the characters. Though the attractive point here is, the skill trees are elaborate enough to make each character unique. For example, Luffy’s skill tree would allow his transformation of Gear 2 – Gear 4 to take place, and even at Gear 4 there are two variants – Bounceman and Snakeman. Having Luffy transformed into G4 Snakeman would see him gain a substantial speed boost, whereas Bounceman would gain him significant raw power.

The game comes in 4 difficulty modes (Easy, Normal, Hard, Ultra Hard), the first 3 are available to choose from and freely changed in the menu while the fourth one only unlocks after completing the campaign. The gameplay itself is a simple ‘button mash hack and slash’ until you achieve the main objective in the game. Each map has a different objective, some may require you to do an escort mission, some will require you to defeat a certain enemy, and some to capture a territory. Though the names of the objectives are different, they all actually require you to do only one thing – beat the living hell out of anyone standing in your way, get there and beat them up some more. It’s a simple, mindless, beat’em up formula designed to make the players feel like a superhero with a simple push of a button. Was it satisfying to throw one punch and send 10-20 people flying? YES. Was it fun to execute a combo by just repeatedly pressing the same button and send 100 people flying? ALSO YES. But here’s the catch – it also gets boring and repetitive quickly. But the good news is, you still got 42 characters to try out! But here’s another catch – They all still do the same thing albeit the difference in style and animation.

Graphic wise the game is not bad. It’s a typical anime-styled game that Omega Force (KOEI TECMO) is famed for producing. I’ve not experienced any frame drops, which is the opposite of what I was expecting from the console version of a game with such fast pace gameplay environment. However, there is something that has consistently annoyed me – the in-game notification that feeds the player with live feedback of what’s going on in the battlefield. The notification comes out in the form of a text bar that appears in the middle of the screen, which is very distracting. Even more so when the notification comes out every 20 seconds when I was grinding at the treasure log. Though the messages were important, but there has to be a better way to deliver them than just popping out in the middle of the screen, denying me the perfect view of my foes flying away upon the unleashing of my character’s skills. The big assed mission tracker is another UI problem that blocks what otherwise would be a good view. For a game that sells itself because of the licensed anime brand and the promise that you will be able to beat everybody up in good fashion, having such visual scar is not just a disaster but a sin! Just look at the screenshot below. 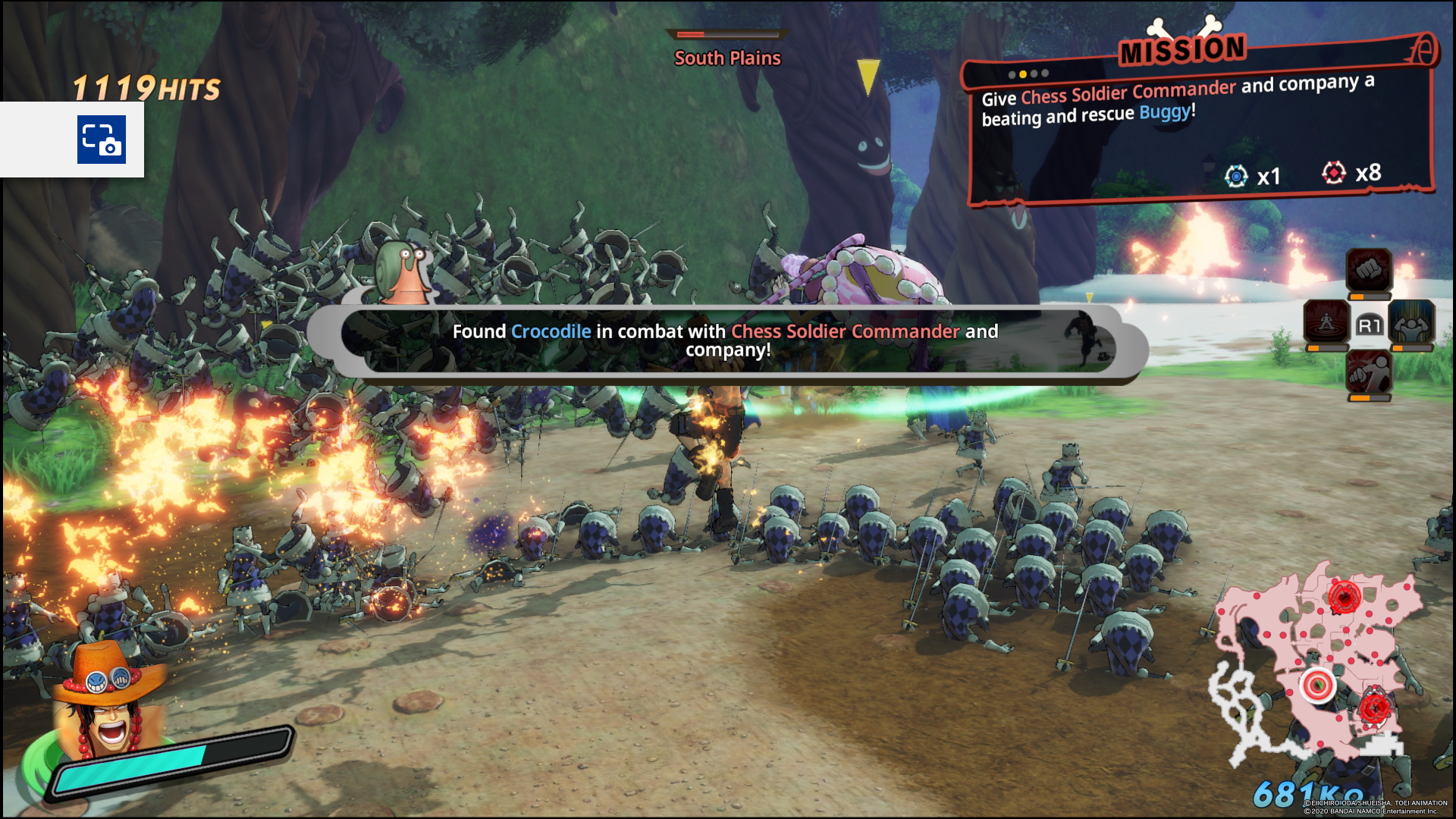 This would have been a cool shot if that annoying notification did not pop out in the middle.

What I Really Liked So Far

One Piece Pirate Warriors 4 offers no surprises and challenges no mind, but like many other Musou games before it, the game did not forget to provide the one most important thing in a video game – that it has to be fun to play. And on that front, I’ve had many hours of fun doing the simplest thing in this game – beating everyone up in absolute style and feel good about it. So, if you are looking for some simple mindless fun that offers many hours of gameplay and access to 43 characters from the One Piece universe, then this game may be a good match for you.