KATANA KAMI: A Way of the Samurai Story Review

Way of the Samurai is one of my all-time favorite games since it came out for the PlayStation 2 where I imagine myself embarking as an unknown ronin into a 19th-century remote Japanese village and roleplay as a samurai-like those Japanese 80s movies. Passing through a village and be greeted with choices to either make a stand for the good of the people, take money for greed, plain power or just simply don’t care which ends up being in a separate branching story path on its own where the game challenges your every choice again and again till the end of the playthrough and that made it very replayable.

In the case of KATANA KAMI: A Way of the Samurai Story, I never felt like I was playing as a ronin in the game; I felt more like I am playing an NPC instead and this time there are no multiple branching paths to explore as whatever I choose in the dialogue options will funnel me to the same story beats of paying a debt for a blacksmiths daughter. Also, the risk of taking an ARPG approach that closely mimics Diablo might have sounded like a good idea but lacks the incentives of what makes this series replayable in the first place.

The story is as simple as it gets, as described in the trailer; you are to help out paying off debts on behalf of a blacksmith to save his daughter from debtors. The three major factions were just there like any seven-eleven NPC which most of the time ends up walking around and minding their own business. Sure, you may pick a fight with them but even defeating them will not kill them entirely from your playthrough with boring newspaper posts remarking their deaths as mere injuries. And worst of all, they won’t come after you or have any small cinematic circumstances to take revenge on you even. Hence, this is by far the worst aspect of the series to date when it comes to story-telling as the game only succeeded in disengaging me from caring about the story at all. 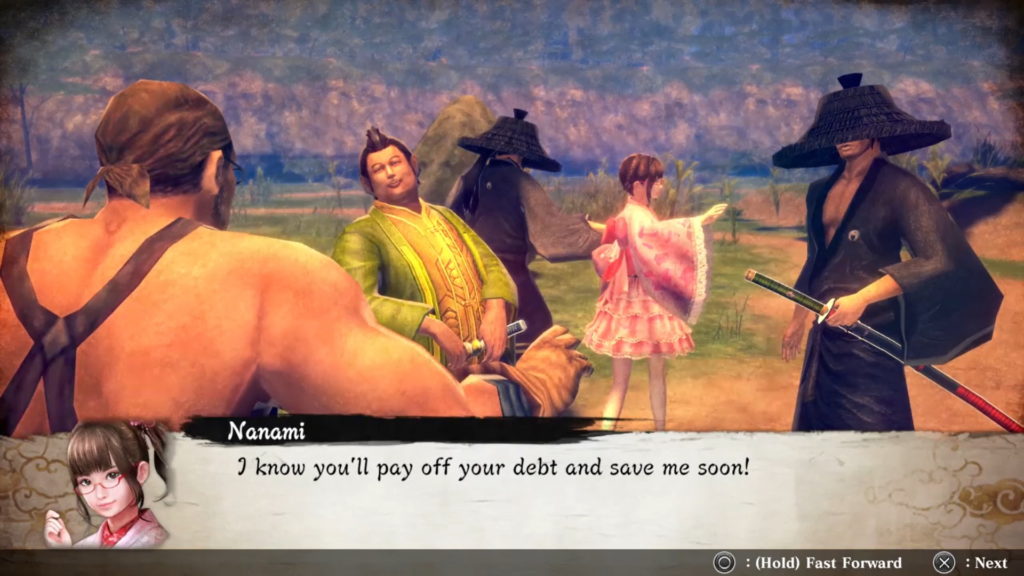 Graphics is a wee bit of an upgrade from the old series which is pretty much just slightly smoothened character models and somewhat decent lighting. Maybe graphically they managed to retain the classic look however the lack of a central hub, or more accurately an incredibly basic central hub disappoints. The game’s hub centers around the blacksmith house only with multiple routes being blocked off and limits my exploration during the day with random faction-based NPC’s roaming around the house buying the blacksmith swords. While night time allows you to explore a randomly generated dungeon called Jikai, inside a hole of a sparkling tree that oddly reminds me of the movie Twilight. While the games main level design appears varied with atmospheric smoky caves and night/day forests, believe me when I say that all you will experience are multiple variations of the same forest; red forest, dark forest, temple forest, and more forests.. which I believe may even improve my eyesight to 20/20 while playing this game with all the green foliage I am subjected to playing this game.

In terms of sound, aside from the awe-inspiring start menu screen with the classic Way of Samurai heroic theme song and an image of a dashing samurai protecting a girl in the background like below:

There really is nothing else worth praising as the game appears generic in nature with only a handful of a decent soundtrack with ensembles of flute, Koto, and piano. Other than the soothing soundtrack every time you enter the blacksmith hub, the randomly generated dungeons are just a mix of odd quietness in-between which makes my whole experience just fighting in a nature-filled library hinted with small flutes by a librarian telling me to pipe down. However, things do pick up in a boss fight with ensembles of Japanese bamboo flute called Shakuhachi, melody-electric violin, and synthesis sound; ramping up the whole energetic feel but there are only a few bosses to fight with and most of them are monkeys.

Gameplay in this game is what you expected, isometric style none rotatable static camera with me dodging away with the circle button, combo slashing via square and a heavy slash by using the triangle button on my controller. The huge main milk and butter in this game are just blocking via holding the R1 button and then pressing triangle at the same time throws your opponents differently depending on the weapon you are equipping. Because most of the time like the main story, the opponent’s AI attack pattern is just plain simple as well as linear with just one straightforward attack and blocking, making it easier to throw or parry the heck out of enemies even my grandma on the controller said “GG” and got bored.

Parrying enemies or dodging their attacks at the right time prompts a heavy damaging or instant killing attack called “Kiwami” that can be chained to about three enemies on the same screen which in my mind is pretty cool. And by killing more enemies, your sword will absorb their spirit like Onimusha which fills up a special bar and by pressing hold R1 button and L1 button at the same time unleashes special super move called “Katana Time” that basically means your sword turns into anime dealing big AOE damage while I feel badass just jam pressing any attacks like a boss.

Other than that, there is nothing else to hook me into the gameplay for a long period of time. Because let’s face it, the enemy variety and even their attack pattern are but a few; I can even recognize their attack patterns in my sleep and count them with my fingers. The boss’s attack pattern is just laughably blockable with one hand and only has about two to three variations of attacks which is pretty disappointing, the monkeys in my local zoo can do better.

Based on the game features, the game comes with over 100 different weapons, nine stances and 9 fighting styles, allowing you to fight in any way you please. Well yeah, but those attack in each weapon is a button similarly pressed the same way with either just three to four square buttons and then a triangle without any form of variation. Hence the game itself doesn’t give me the incentives to invest in learning a specific sword skill because basically, it’s still just a few buttons mashing away. Moreover, online mode is best left turned off because I find myself more accidentally slashing my new found friend which opens up PVP almost every time or they can backstab you from behind too like any office colleagues. And online mode is mostly finding other people randomly online in the dungeons and the game doesn’t offer any co-op with your friends on your friend’s list which to me is pointless in 2020.

Last but not least, the controls in this game are pretty bad as when moving by pressing the up directional button will prompt the main character to at times automatically turn to walk motion midway instead of running smoothly which makes me feel like I am running through invisible road bumps.

Well, the game is only playable at some parts but for the most parts; you might as well wait to get it as one of the PSN free monthly games because basically the game is just a spin-off of a famous series to milk me as their fans without offering more to the storyline and gameplay. Like any roguelike game, I will cry if I died and lost all my swords but I don’t find myself dragging through the whole thing again due to the fact that I know what to expect from the enemies and bosses without any surprises along the way which can get pretty boring.

It’s called the Way of the Samurai but heck there’s no way I would recommend anyone to buy it.

Two games in one! ROBOTICS;NOTES DOUBLE PACK will be on Nintendo Switch & PS4 this October

Numskull Games and Spike Chunsoft, Inc. has announced that ROBOTICS;NOTES DOUBLE PACK will be released on Nintendo Switch and PlayStation 4 on October 16th....
Read more
News

After the release info of announcement date, publisher Spike Chunsoft and developer Acquire further elaborates the gameplay for Katana Kami: A Way of the Samurai Story...
Read more
News

Publisher Spike Chunsoft and developer Acquire has announced the release date of Katana Kami: A Way of the Samurai Story, the game will be...
Read more