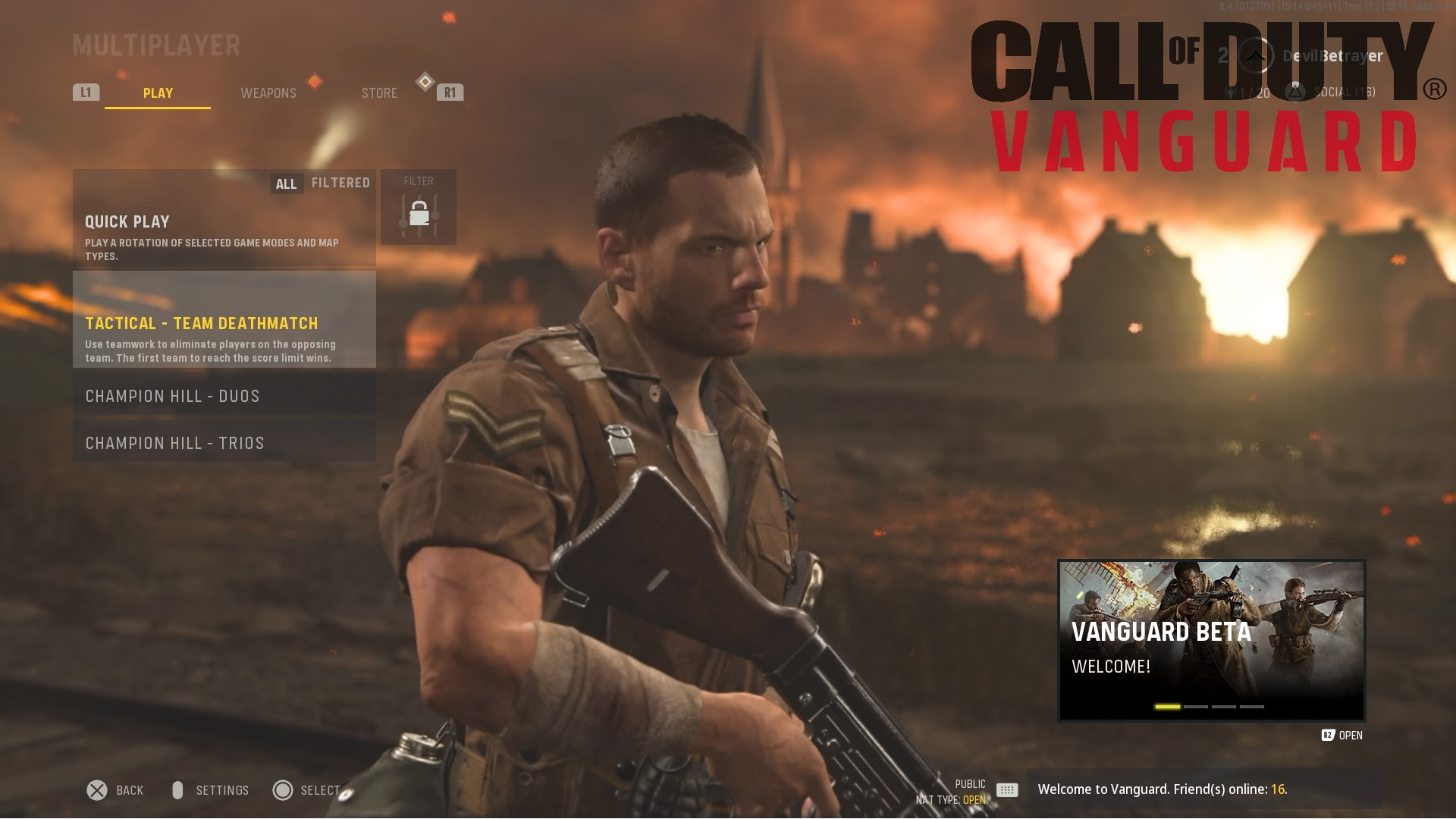 We got the chance to join in on the Call Of Duty: Vanguard public beta which is exclusive for PlayStation last weekend. I played on the PS4 version, and my previous experience with the COD series was Call of Duty: Modern Warfare 2019. By now most people are familiar with the COD series so I just wanted to share some things that I thought was interesting from this BETA.

The game is set in World War 2, so the visual/graphic looks like it has a vintage filter which makes me feel like I was in that era. However, there is a certain area of the map like in the Hotel Royal where inside the rooms can be a bit hard to spot the enemy indicator when around the warm lights as its looks similar, so that really took me a while to get used to.

When setting up the controller settings, I noticed there are Keyboard/Mouse settings so without hesitation, I immediately plugged in My Razer BlackWidow Tournament Edition keyboard and Razer Taipan Evil Geniuses Edition mouse to test it out, and proceeded to set keybinding on the side button of the mouse which surprisingly works!

I spent most of the time in Team Deathmatch having fun in a new mode called “Patrol mode” where players are required to stay in the moving circle to gain points while trying to prevent the enemy from taking the point. The circle does move in the same repeated pattern which allows you to plan your ambush! The other new “Blitz mode” is a 14 vs 14 or 20 vs 20 face-off in small map where you sudden feel the map become cramp and crowded, this is because in normal TDM only 6 vs 6, so what will happen when more players? CHAOS!!!
Hotel Royal, Gavutu, and Red Star were available in the current BETA, with another new map that will be added in Week 2 called “Eagle’s Nest” in the coming week for the second BETA running from Sep 16th – 20th.

Weapons Loadouts are fully accessible for players but it requires players to rank up to level 4 to unlock it. Since the game takes place in the WW2 era, most of the weapons I’m not familiar with (yup do not have an M4A1 assault rifle in-game hahaha…) so it’s like watching the Discovery Channel showing some history on each weapon, and the weapons design is quite interesting as well especially the revolving shotgun, a revolver pistol in steroid mode and is hard to use!!! Each weapon has a total of 10 attachments for you to customize with which I take some time to customize to suit my playstyle.

As mention in the Activision Blog, not all perks have been fully unlocked on this BETA, there are perks that are still classified until full release on November 5th. Lucky the perk is not locked behind the paywall… hehe.

I had a lot of fun with my experience in the BETA taking out enemies and getting taken out without realizing it most of the time and after watching the kill feed, I do feel amazed at how those players pull off their amazing skill. The only problem I want to highlight is the respawning issues as enemies can spawn behind or beside you or vice versa in certain maps/modes. Hopefully, it will be fixed when the game is fully released.

Below is one of my recorded gameplay for Call of Duty: Vanguard Open BETA;

A First Look At The Revamped Call of Duty: Modern Warfare II Gunsmith