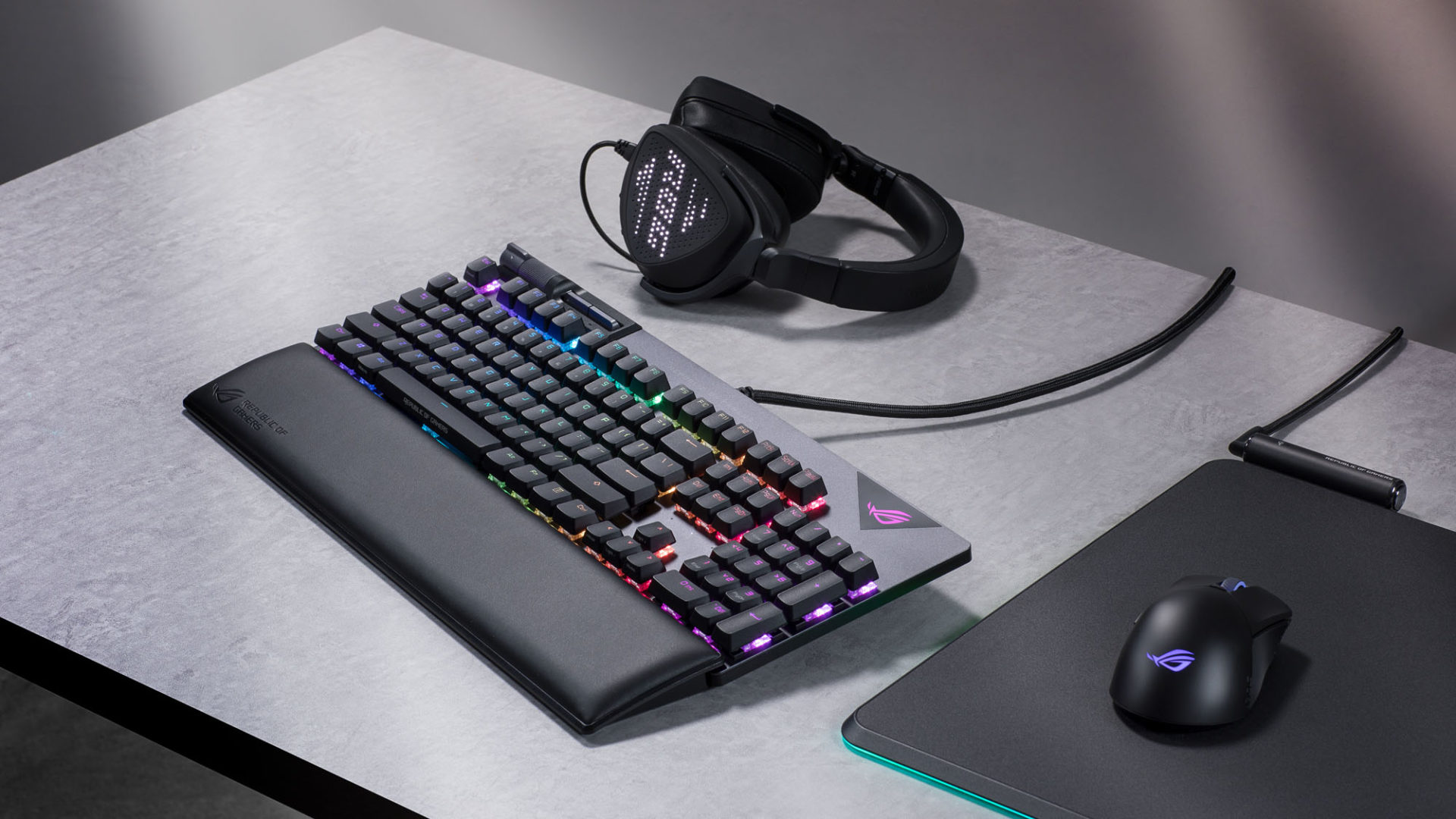 ASUS ROG is releasing two new keyboards for CES 2022 to fit the needs of every warrior. The fully loaded Strix Flare II and Strix Flare II Animate are ready to start the year with a bang.

The ROG Strix Flare II Animate takes everything great about the previous Strix Flare and amps it up to 11, from the feel of the switches to ultra-fast response times and an improved wrist rest. But when you first lay eyes on this beauty, your eye will undoubtedly be drawn to the kickass animations in the top corner. But that’s just the tip of the iceberg. The Strix Flare II and Strix Flare II Animate come with a host of other improvements as well. First, let’s talk switches: both keyboards now feature ROG’s new NX mechanical switches, which come in blue clicky, brown tactile, and red linear variants. Each is custom-tuned for optimal tactile force, 70 million keystroke durability, and unparalleled consistency, so you can count on every keystroke responding the same each time. We’ve even tuned our switch stabilizers to reduce keystroke friction on longer keys like Shift and Spacebar.

But the world of mechanical keyboards has grown, and If you’re all-in on ROG but can’t give up your Zealios or Holy Panda switches, the Strix Flare II Animate features swappable sockets, so you can pop out the bundled switches for your favourite Cherry-compatible alternatives and game your way. 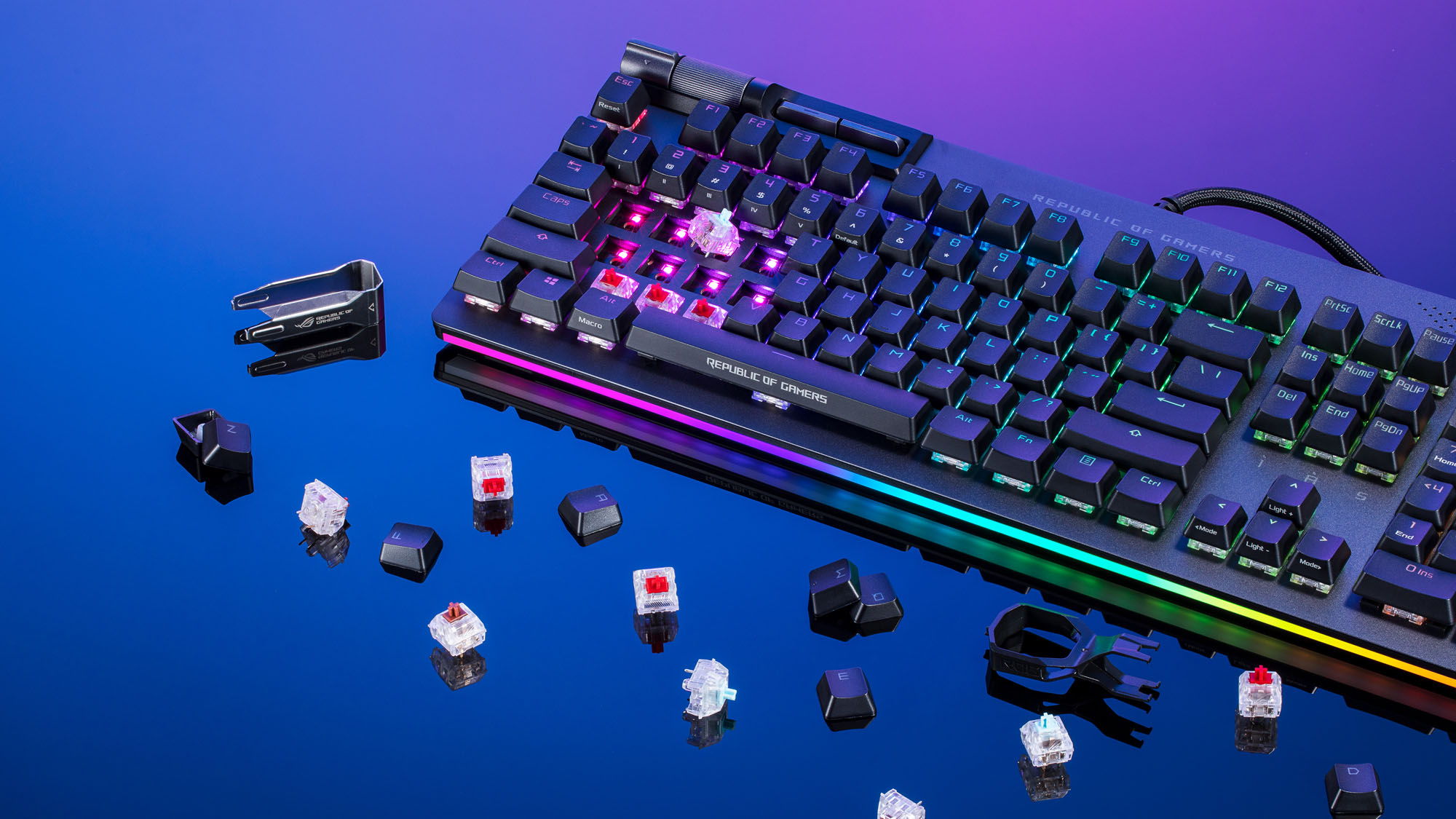 ASUS ROG also upgraded the keycaps on both keyboards to doubleshot PBT, which is a more durable, premium-feeling material. With a subtle texture on the surface, these keys won’t get shiny over time, and the doubleshot injection-molding process ensures the legends won’t wear off as you strafe enemy fire day after day. PBT also gives a slightly crisper sound to your keystrokes, made a bit more subtle by the Strix Flare’s new sound-dampening foam that decreases pinging and echo inside the keyboard case. The half-height profile utilizes shorter keycap stems to minimize wobble, for more stable keystrokes.

Both keyboards come with improved soft-touch wrist rests as well—the Flare II Animate’s wrist rest even includes a light diffuser for showing off a bit of extra RGB.

Finally, let’s turn to performance. The ROG Strix Flare II and Strix Flare Animate both feature an 8000Hz polling rate that refreshes input up to eight times faster than most gaming keyboards, reducing delay to 0.125ms for lightning-quick actuation. The NX Red and NX Brown switches feature zero delay between actuation and reset, with NX blue switches are near-zero at 0.1mm. That means you can double-tap as fast as your fingers can move, which is crucial in frenetic firefights.

USB pass-through allows you to connect your mouse, flash drive, or other devices to the keyboard for reduced cable clutter, while on-the-fly macro recording lets you set custom shortcuts in a few keystrokes. The media controls have been revamped for 2022 as well, with a track-skipping toggle next to the volume wheel and a play/pause button on the side. Each button and wheel feels distinctive from the others, so you’ll never accidentally hit the wrong button at the wrong time. And you can reprogram these keys for your own purposes in ROG’s Armoury Crate software.

Of course, you get the same per-key RGB lighting as previous generations, compatible with Aura Sync to match all your other gear. From the aluminium alloy top cover to the improved switches, PBT keycaps, and new wrist rests, the Strix Flare II and Flare II Animate bleed pure quality.